Want to see a neat trick?

As we've documented extensively over the past year, conservatives have waged an ongoing campaign to re-brand the process of reconciliation as the “nuclear option.” Feel free to read any of the hundred or so examples from our archives to get the full story, but to put it briefly: this is outrageously dishonest. The “nuclear option” was a term coined by Sen. Trent Lott (R-MS) in reference to his proposed change to Senate rules that would have banned use of the filibuster for judicial nominations.

Reconciliation, on the other hand, requires no change to Senate rules since it has been used repeatedly over the years to pass major legislation - notably to pass major pieces of health care reform legislation. Republicans themselves weren't quite so uncomfortable with the supposedly "dirty" process when they used it to pass President Bush's tax cuts. Multiple times.

Here's how the trick works:

Today, conservative media are furiously promoting a video posted at Breitbart TV, titled: “Obama & Dems in 2005: 51 Vote 'Nuclear Option' Is 'Arrogant' Power Grab Against the Founder's Intent.” You can probably guess where this is going.

Among others, the video has been picked up by Glenn Beck, Rush Limbaugh, CPAC “Blogger of the Year” Ed Morrissey, Matt Drudge, and, of course, Fox Nation: 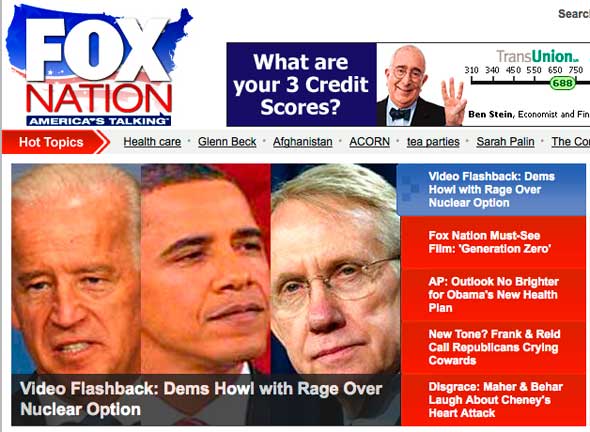 In a jaw-dropping display of audacity, the video runs several examples of Democrats railing against the “nuclear option” in 2005. The video attempts to juxtapose this with their current support for reconciliation to show their supposed hypocrisy.

The Democrats in the video are railing against the “nuclear option” as defined by Lott, not the new definition conservatives have decided to bestow upon the phrase. On his radio show, Beck called the video “laughable” and “unbelievable.” I agree with those characterizations, but for slightly different reasons.

To prove a point, I propose we change the definition of “deficits” to mean “freedom,” then put together a reel of conservatives attacking “freedom.”

It would be about as honest.