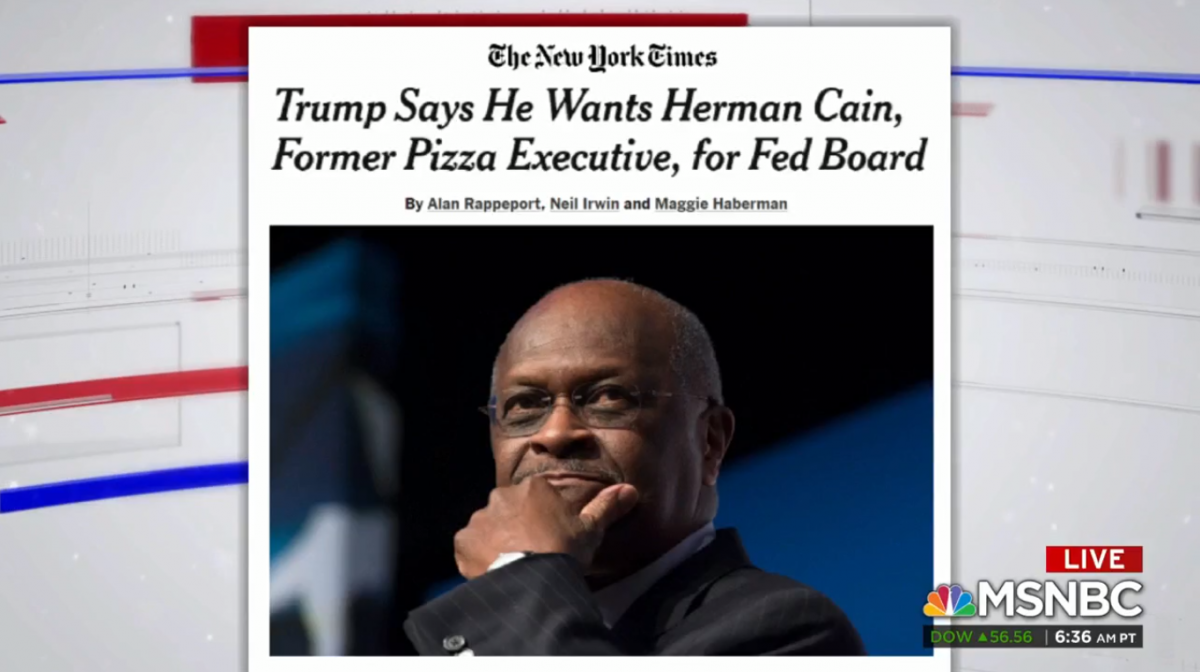 Herman Cain, whom President Donald Trump is recommending to the Federal Reserve Board, has sent numerous sponsored emails to his mailing list promoting penny stocks that are now virtually worthless.

Cain is a right-wing commentator and former chair of the Federal Reserve Bank of Kansas City. He previously ran for president but dropped out after several women reported him for sexual misconduct. The Washington Post reported on April 4 that “Sharon Bialek, who said Cain had reached beneath her skirt in 1997 and tried to pull her head toward his crotch, said Thursday that his record of harassment should disqualify him from the Fed post.”

In the years since his presidential campaign, Cain has turned his mailing list into a haven for scammy emails. In January, Media Matters documented numerous financial grift emails that Cain sent to his list. Cain also recently founded a pro-Trump PAC with Floyd Brown, a right-wing birther who produced the racist Willie Horton ad attacking Michael Dukakis in the 1988 presidential election. The PAC recently attacked the 12 Republican senators who voted against Trump's emergency border declaration as “traitors” who can’t be trusted “to defend President Trump.”

Cain has also repeatedly touted penny stocks to his email subscribers. The U.S. Securities and Exchange Commission defines “penny stock” as generally referring “to a security issued by a very small company that trades at less than $5 per share” and says such stocks are “generally considered speculative investments.” The penny stock market is riddled with unsavory practices and fraud, especially because of paid promoters who attempt to pump up the price of penny stocks for the benefit of themselves and their employers.

Andrew Calamari, then-director of the SEC's New York office, said in 2014: "If we had a message to deliver, it would be that this is a very dangerous market for retail investors and that they should tread very, very carefully.”

Media Matters has received numerous sponsored emails from Herman Cain promoting penny stocks which are now virtually worthless. Those emails, which were not written by Cain, told readers of countless future financial rewards, including turning "$5,000 into more than $40,000 within a few short months”; making “ten-times your money or better”; and becoming ”multi-millionaires in the process."

Cain’s penny stock mailings also include pitches from disgraced penny stock fraudster Tobin Smith, who was so corrupt that Fox News fired him in 2013 for violating a policy against paid stock promotions. In 2016, the SEC announced that Smith “agreed to settle charges that he and his company fraudulently promoted a penny stock [IceWEB Inc.] to investors” and “agreed to be barred from involvement in any future penny stock offerings.”

Here are 10 examples of Cain’s mailing list sending sponsored emails which touted now-virtually-worthless penny stocks. (Note: Because of the transient nature of penny stock promotions and the passage of time, many of the original images in the emails are no longer available.)

Sample sales pitch from the sponsored email, which was written by The Wall Street Revelator’s Andrew Carpenter:

Opportunities like this don't come often. It's big, it's unprecedented, and it's happening right now. I urge you to follow up immediately. Virtus Oil & Gas VOIL could yield stratospheric gains for shareholders who move in immediately.

Sample sales pitch from the sponsored email, which was written by BottomLine Newsletter's John Person:

Disruptive technologies have the ability to change society, revolutionize entire industries, and turn savvy investors into multi-millionaires in the process.

American Heritage (AHII) is, in my opinion, destined to become one of the leaders in the fast-growing electronic cigarette business. Currently trading for about $1-2, the stock could easily double or triple in the next 18-24 months if the company remains independent.

Sample sales pitch from the sponsored email, which was written by Next Big Thing Investor PRO’s Tobin Smith:

The Simple Investment Case for Ener-Core (ENCR): 2.50 dollars to 3.00 dollars over the Next 12 Months

I discovered this company from one of the only investment banks that covers smaller industrial clean technology companies.

These analysts (who are top drawer in the clean tech world) published an Ener-Core (ENCR)12-month price target of 2.50 dollars in the beginning of 2014.

But I truly think their target price is too conservative in the short term--3 dollars is reasonable given that the company is OUT of its proof-of-concept stage and ramping up revenues in 2014 with a hockey-stick type sales ramp in 2015.

You will need to act quickly on this...you've seen how as these Industrial Cleantech stocks get discovered many have exploded in value in a matter of weeks and months.

The key to your chance for catching the NEXT 884% Industrial Cleantech monster winner is of course to be in the stock at today's prices...but you know that.

Sample sales pitch from the sponsored email, which was written by The Myers Letter’s John Myers:

Centor Energy (CNTO) just went public. Shares are now around $1, and as my just-released Special Report reveals, early investors are looking at a 1,200% winner.

I'm John Myers and I'm going on record saying CNTO is set to jump from $1 to $8. And that's my short-term outlook. Longer term could see the stock climb to $25 and from there onwards to $100.

Sample sales pitch from the sponsored email, which was written by The Bowser Report’s Thomas Rice:

KonaRed is already selling at Wal-Mart, Walgreens, Albertson'’s, 7-11 and other giant retailers in Hawaii. Now, this breakthrough sensation and the company that makes it, KonaRed (KRED) is ready for prime time. It is looking at rolling out all across the U.S. mainland! Investors are thrilled -– KRED is still under $1. Buy now!

FREE report reveals how early KRED investors (such as you!) could turn $5,000 into more than $40,000 within a few short months.

Sample sponsored email claim, which was written by The Kolber Report’s Jonathan Kolber:

Endeavor IP (OTCBB: ENIP) represents the hottest company I've seen in decades. I believe ENIP is a company with little downside... and a strong likelihood of seeing an extraordinarily high upside become a reality.

P.S. Make no mistake...it takes just one company to cut a deal - or attempt a buyout - and shares of Endeavor IP (OTCBB: ENIP) could potentially move so quickly you wouldn'™t [sic] have time to get in. That's why it's so important that you act now - before the window closes - to avoid missing out on what could be your second chance to turn $10,000 into $757,200 just like investors in patent stock VHC!

Strike now and you stand to make ten-times your money or better with this off-radar newcomer:

This is an urgent buy recommendation to act on immediately!

Sample sales pitch from the sponsored email, which was written by James Rapholz of James Rapholz's Economic Advice:

Cash in on the Greatest Materials Bonanza Since the Invention of Plastic!

I think it could happen in just months!

P.S. Graphite is such a modern-era commodity, watching this 40 cent stock hit $13.20 is certainly possible. Last century steel played the same role as a breakthrough material. And it was.

• How this little-known breakthrough technology could help make the U.S. the world’s #1 Oil producer by 2017.

• How this same revolutionary technology could be about to add some 6 trillion barrels oil to the world’s recoverable reserves.

• Why Obama and the environmentalists will absolutely love it.

Hang on for a big-oil takeover that could rocket PSON as high as $30.95!

Polar Petroleum (POLR) could hand investors “near-term gains of up to 1,800%”

Investors are buying this stock up to $10 per share... with a $20 price target

Polar Petroleum (POLR) could blow-the-doors off all three of these stocks...

Astute investors are buying shares in Polar Petroleum now for near-term gains of up to 1,800%