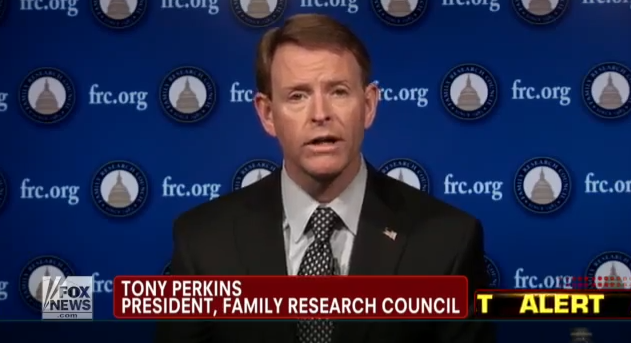 Perkins' political ascendance in Louisiana began nearly two decades ago, with his election to the state House of Representatives. He served in that body from 1996 to 2004, making an unsuccessful bid for the Republican nomination for the U.S. Senate in 2002. During his time in the legislature, Perkins founded the right-wing Louisiana Family Forum out of a reported “concern about the influence of the homosexual movement.” He cemented his role as a social conservative leader when he assumed the presidency of the FRC in 2003.

While the FRC is based in Washington, Perkins has always kept one foot in Louisiana, commuting to Washington from the state every week, Perkins considered launching a primary challenge to Republican Sen. David Vitter in 2010, ultimately opting to sit that race out. Perkins has cultivated a close relationship with Gov. Bobby Jindal, who appointed Perkins to the Louisiana Commission on Marriage and Family in 2008. The Southern Poverty Law Center (SPLC), however, notes that Perkins skipped all of the commission's meetings.

Perkins' dismal attendance record notwithstanding, Jindal announced this September that he was naming Perkins to the Louisiana Commission on Law Enforcement, which is responsible for awarding grants, officer training, and law enforcement regulation. Slate noted that in a state where anti-sodomy laws remain on the books and gay men have recently been arrested for having sex, the virulently anti-gay Perkins now has a role overseeing law enforcement.

Within weeks of his appointment to the law enforcement commission, Perkins expressed interest in seeking the open U.S. House seat from Louisiana's sixth congressional district in 2014. Perkins would join what's likely to be a jam-packed field of Republicans vying for the seat, but he says he finds it “an attractive prospect to be closer to home.”

A Record Of Extremism and Hate

If past is indeed prologue, social issues will be at the forefront of a Perkins congressional campaign. During his decade at the helm of the FRC, Perkins has amassed a record as one of the country's most rabid opponents of LGBT equality. The FRC's malicious, baseless smears against LGBT people led the SPLC to designate the organization an anti-gay hate group in 2010, and Perkins' own history of anti-LGBT commentary helps illuminate why.

To Perkins, gay people are “intolerant,” “hateful,” “vile,” “spiteful” and “pawns” of “the enemy.” Perkins has spread the myth that there's a link between homosexuality and pedophilia, calling the sexual abuse of children “a homosexual problem.” He has called the It Gets Better project to affirm LGBT youth a “disgusting” ploy to “recruit” youth into the gay “lifestyle.” The punishment for being part of that “lifestyle”? “Eternal damnation,” according to Perkins.

Perkins doesn't merely oppose marriage equality as a matter of public policy. He says it's nothing short of a grave “evil.” And not only did Perkins vigorously oppose lifting the ban on open service by LGB soldiers; he proclaimed that members of Congress who voted to end Don't Ask Don't Tell had the “blood of young Marines” on their hands.

Given his apocalyptic take on what LGBT equality would mean for the country, it came as little surprise when Perkins warned of a “revolution” if the Supreme Court were to legalize same-sex marriage.

In addition to his record of anti-LGBT extremism, Perkins also has ties to white supremacist groups.

While managing Woody Jenkins' 1996 campaign for the U.S. Senate, Perkins paid $82,500 to use the phone bank used by former KKK leader and 1991 GOP gubernatorial nominee David Duke. The phone bank was maintained by Impact Mail Ltd., in which Duke held a financial stake. Perkins claimed not to know “the complete Duke connection” at the time of the purchase. However, upon discovering the connection, he rerouted the payment through Courtney Communications, the New Orleans Times-Picayune reported in 2002. "[P]olitically, we didn't want to be connected with Duke," Perkins explained. According to the SPLC, Jenkins' campaign ultimately paid a $3,000 fine for filing false disclosure forms as part of a failed attempt to cover up its ties to Duke.

Perkins' links to white supremacists didn't end with Duke. In 2001, the SPLC notes, Perkins spoke before a meeting of the white supremacist Council of Conservative Citizens. Perkins later feigned ignorance of the group's white supremacist beliefs, but a photo from the event shows him speaking in front of a Confederate flag.

How Louisiana's Newspapers Are Covering Perkins

As he contemplates taking his extremist act to the halls of Congress, it appears that Perkins won't have to worry about Louisiana's top newspapers holding him accountable for his views. An Equality Matters analysis of five newspapers from the state reveals that most major papers have largely ignored his political ascendance, while others have whitewashed Perkins' extremism and hardly any have noted the FRC's hate group status or Perkins' record of inflammatory remarks.

The five newspapers examined in Equality Matters' analysis have mentioned Perkins in a total of 29 articles in 2013. The Lafayette Daily Advertiser has not published a single article mentioning Perkins this year, while of the Alexandria Daily Town Talk's six articles featuring Perkins, all but one concerned his role as a trustee of Louisiana College.

Of all the articles mentioning Perkins, a mere 10, or 34 percent, examined his political rise in the state. Articles in the New Orleans Times-Picayune and Baton Rouge Advocate have reported on Perkins' recent law enforcement commission appointment, his potential congressional run, and speculation earlier this year that he might challenge Sen. Mary Landrieu (D-LA) in 2014. The Shreveport Times, Alexandria Daily Town Talk, and Lafayette Daily Advertiser completely ignored Perkins' appointment and political ambitions.

Coverage of Perkins all too often ignores his and the FRC's rabid anti-LGBT views.

The Times-Picayune has described the FRC as “a conservative Christian organization” and “a conservative advocacy group,” portraying the FRC as a serious policy institute that just happens to be right of center. The paper has repeatedly allowed Perkins to utter easily-debunked falsehoods about LGBT people, with no pushback from its reporters. A March article on oral arguments in the Supreme Court's marriage equality cases quoted Perkins' baseless assertion that “decades of social science” show that same-sex parenting is harmful for children. Experts have found no such thing, but you wouldn't know it from reading the Times-Picayune's report. In November, a report on the Employment Non-Discrimination Act (ENDA) featured Perkins' claim that “FRC isn't in favor of discrimination against anyone for any reason.” The Times-Picayune neglected to inform readers of the FRC's repeated efforts to defend anti-LGBT employment discrimination.

Overall, only three articles - 10 percent - featuring Perkins noted the SPLC's designation of the FRC as a hate group. Of those three, none included any examples of the anti-LGBT smears spread by Perkins and his organization, leaving readers without vital context for the designation. Three other articles - all in the Baton Rouge Advocate - highlighted Perkins' and the FRC's extremist rhetoric.

Put another way, 90 percent of articles on Perkins made no mention of his extensive history of hateful and bigoted commentary.

Whether Perkins decides to run for Congress or not, Louisiana's newspapers are miserably failing the state's voters by leaving them in the dark about the disturbing views of a well-connected right-wing political figure who is now involved in oversight of the state's law enforcement. Despite its well-documented anti-LGBT hate, many state and national media outlets continue to pretend that the FRC is a serious policy organization. The media's legitimizing of the FRC has undoubtedly helped propel Perkins to his current perch of political influence, and as he contemplates his next move, he looks set to benefit from the local media's unwillingness to report on the spiteful views he espouses.