In the aftermath of the election, conservative media figures have alleged that Democratic candidates’ emphasis on climate change was a reason they lost, claiming this focus alienated or drove away voters. But numerous polls conducted in the run-up to the election indicated that a majority of Americans consider climate change an important issue and favor government action to address it, and an exit poll similarly revealed that most voters in Florida view climate change as a serious problem. While these polls indicate that a focus on climate change didn’t harm environmentally friendly Democratic candidates, a plausible explanation for why the issue may not have helped them is the lack of attention it received from the media, including during debates.

WSJ’s Holman Jenkins: Climate Advocacy Represents “Exactly The Kind Of Elite Cronyism Voters Are Sick Of.” In a column headlined “Green Elites, Trumped,” Wall Street Journal columnist Holman Jenkins, Jr. asserted, “Wealthy investors like George Soros, Nat Simons and [Tom] Steyer, who finance the party’s green agenda, have ridden the [Democrats] into the ground.” Jenkins added that climate advocacy turns off voters, writing: “The theory and practice of climate advocacy, on one hand, has been thoroughly, irretrievably corrupted by self righteousness—blame Al Gore, that was his modus. Yet, on the other, it has allowed itself to become the agent of economic interests that can’t survive without pillaging middle-class taxpayers and energy users—exactly the kind of elitist cronyism that voters are sick of.” [The Wall Street Journal, 11/16/16]

Bartiromo made a similar claim the following day on her Fox Business show Mornings with Maria. During a discussion with Fox News host Sean Hannity, Bartiromo said that Democrats were “ignoring what American people want” and expressed disbelief that Democrats were “still talking about climate change” after the election.

On Fox Business, American Conservative Union Chairman Claimed Obama Climate Policies Help Explain Why Trump “Did So Well” In Wisconsin And Michigan. During a discussion of Donald Trump’s economic agenda on the November 10 edition of Fox Business’ Intelligence Report with Trish Regan, American Conservative Union chairman Matt Schlapp falsely claimed that the Obama administration’s climate change policies were responsible for “shedding more jobs, [and] making energy more expensive,” which he claimed was “one of the reason that Donald Trump did so well in states like Wisconsin and in Michigan.” [Media Matters, 9/25/15; 8/4/15]

Florida Exit Poll: Two-Thirds Of Florida Voters Say Climate Change Is a Serious Problem. NBC News reported: “According to early results from the NBC News Exit Poll, two-thirds of Florida voters consider climate change or global warming to be a severe problem. Only three in 10 voters in the state think climate change is not posing serious challenges.” [NBCNews.com, 11/8/16]

Americans are taking global warming more seriously than at any time in the past eight years, according to several measures in Gallup's annual environment poll. Most emblematic is the rise in their stated concern about the issue. Sixty-four percent of U.S. adults say they are worried a “great deal” or “fair amount” about global warming, up from 55% at this time last year and the highest reading since 2008. [Gallup.com, 3/16/16] 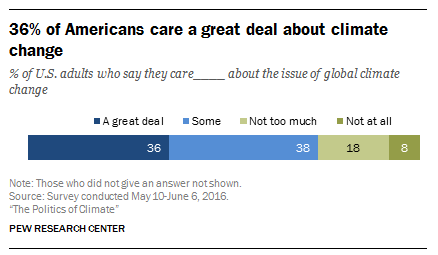 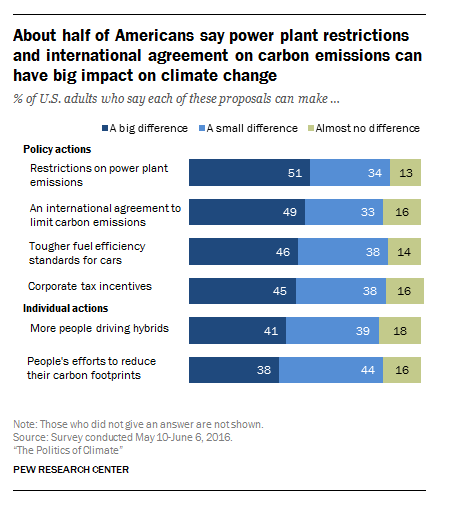 Network Evening Newscasts Almost Completely Ignored Policy Coverage In 2016 Campaign, Including Climate Change. Major broadcast networks largely ignored policy coverage during the 2016 presidential campaign, according to the Tyndall Report, which for decades has tracked the broadcast networks’ nightly news programs. Two weeks before the election, the Tyndall Report found that “issues coverage this year has been virtually non-existent,” adding: “No trade, no healthcare, no climate change, no drugs, no poverty, no guns, no infrastructure, no deficits. To the extent that these issues have been mentioned, it has been on the candidates' terms, not on the networks' initiative.” Additionally, a study released in September from Harvard Kennedy School’s Shorenstein Center on Media, Politics and Public Policy determined that during the time of both parties’ conventions this summer, only eight percent of news coverage centered on policy and issues. [Media Matters, 10/26/16; Tyndall Report, 10/25/16; ShorensteinCenter.org, 9/21/16]

Climate Change Was Absent From Presidential Debates And Most Debates In Key Senate And Governors’ Races. A Media Matters analysis found that none of the three presidential debates nor the vice presidential debate included questions about climate change, and just 12 of the 51 debates held in tightly contested Senate and governors’ races included questions about climate change (24 percent). [Media Matters, 9/29/16, 11/7/16]