President Trump kicked off his trip to Europe on July 6 with a speech in Warsaw, Poland. In his address, Trump issued a call to “the West” to defend itself and its values. In the speech, he enumerated accomplishments of the so-called “West” in a way that was similar to the claims of other parochial politicians before him, such as Rep. Steve King’s (R-IA) claim that “other categories” and “subgroup[s]” of people have not made any valuable contributions to society akin with those of “Western civilization.”

While the dog-whistle politics of the speech were obvious to many, to Trump’s most ardent admirers the speech was worthy of praise, and seemed to confirm many xenophobic and even racist biases. Here are just five examples:

TUCKER CARLSON: So it’s worth remembering the basics: Western civilization is our birthright. It makes all good things possible. Undefended, it collapses, and so we’ve got to fight to preserve it. Not just with airstrikes, but with a vigorous defense of our common values. Nothing matters more than that.

2. The Daily Stormer’s Andrew Anglin just cut to the chase and said what we were all thinking 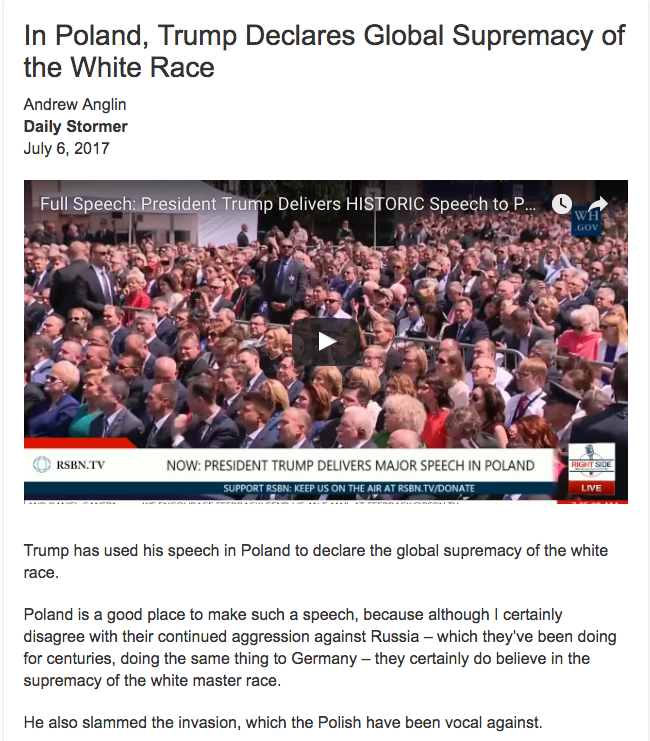 3. Fox’s Pete Hegseth praised Trump’s speech for encouraging “having babies and passing it on to the next generation” so that the west can "remain strong and free”

PETE HEGSETH: What he underscored yesterday were the foundations and the fundamentals of the western civilization. [The founding fathers] would recognize what he had to say. But those very fundamentals have been forgotten by most of the leaders and countries in that room. And a message he delivered was, if we're going to save our civilization, if the west is going to remain strong and free, we have to remember the values that got us here. The values that were enshrined in the Declaration and the Constitution. It’s basic things like patriotism and productivity and borders and belief in your own country, having babies and passing it on to the next generation. These things are sort of passé or not as sophisticated as many in those rooms would view them as and therefore they’re discounted and they focus instead on things like diversity, multiculturalism, atheism. Frankly, he talked a lot about God. This is a guy that understands if you believe in something greater than yourself that informs who you are and what you are willing to fight for.

4. Fox’s Newt Gingrich: Trump has “come down decisively on the side of those who worry about national identity”

LAURA INGRAHAM (GUEST HOST): Newt, I was wishing that the audience was mic'd up better because the audience was going nuts. There were many parts they were cheering for Donald Trump, but in that moment, they are feeling the criticism, the brunt of the criticism they are getting now from Merkel and other European elites for not taking in more of the refugees. And they're like “we're not doing this, we're not doing what you're doing,” and Donald Trump clearly gave support for their vision of protecting their own sovereignty and their own borders, and also, of course, fighting the common interests-- common enemies.

NEWT GINGRICH: There is a huge gap between the values of the central Europeans, which includes not just Poland, but Hungary, Romania, Bulgaria, a number of countries -- and the values of Germany and the Scandinavian countries and the Netherlands and France. What Trump has done is come down decisively on the side of those who worry about national identity, worry about survival, have been very practical, and of course he set the stage for the meeting in Hamburg, and indicated clearly to Merkel he ain’t backing down. So, it'll be very interesting to see how that works.

5. To 4chan’s “Politically Incorrect” message board community, Trump’s speech was the “absolute rejection of multiculturalism”

Trump's speech in Poland showed true leadership, and what our allies have been missing for decades.
Absolute rejection of multiculturalism. pic.twitter.com/Y7R51GLDce