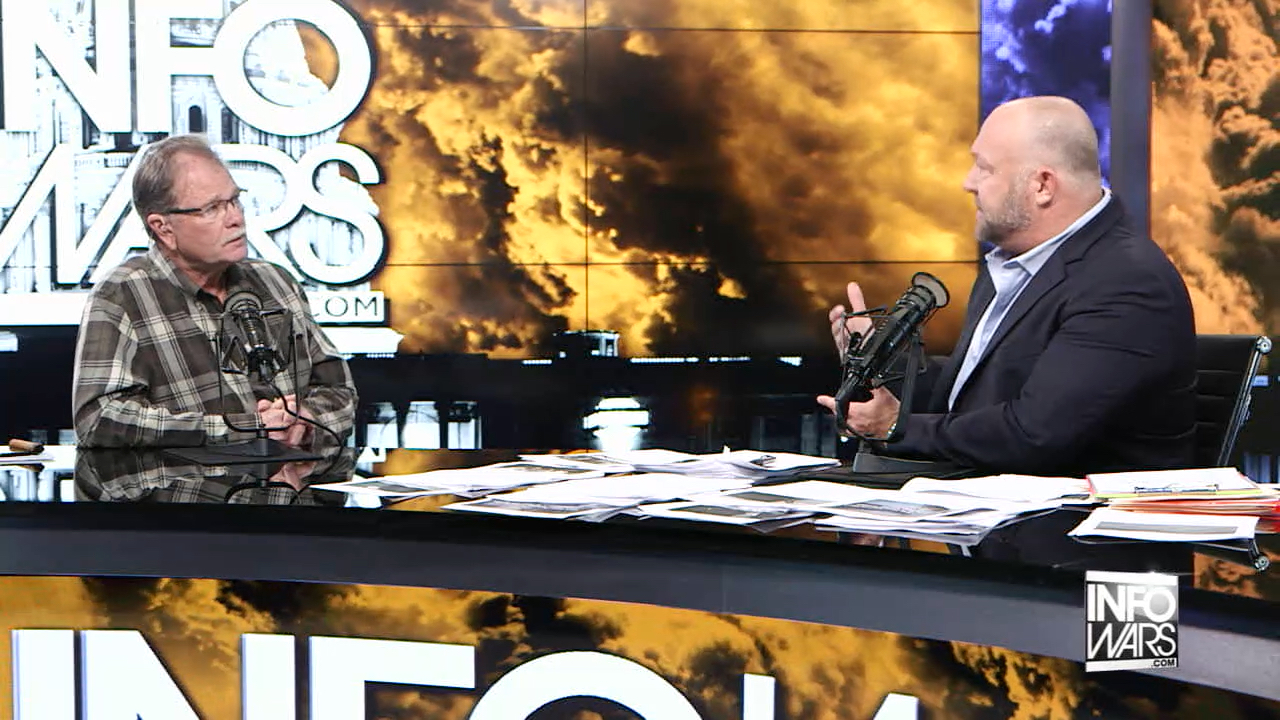 Gary Heavin, the co-founder of fitness chain Curves International, recently told conspiracy theorist Alex Jones that he met with Republican Texas Gov. Greg Abbott to discuss coronavirus. During the same appearance on Jones' show, Heavin promoted a conspiracy theory that COVID-19 is a man-made biological weapon to target people based on race and said that he shared information with Abbott from extremely disreputable conspiracy theorist Mike Adams that he said was “an instrumental part of that conversation.”

Heavin is a major donor to Abbott and has provided him with private air travel. He is also a conspiracy theorist. As Right Wing Watch documented, Heavin has promoted conspiracy theories about the 9/11 terror attacks and that in 2016 he “won cheers” from disgraced televangelist Jim Bakker’s audience “when he lashed out at the refugee resettlement program and American immigration policy, which he cited as proof that the government is deliberately attempting to incite unrest.”

During the March 11 broadcast of The Alex Jones Show, host Alex Jones said of Heavin, “We got a call about two hours ago, he said I’m about to meet with the governor -- I know how much the governor loves you and you guys meet a lot -- on coronavirus and I want to come in after I talk to him and give you a report on what’s going on.” Heavin said of the meeting, “A lot of it is going to be in confidence so I can’t reveal everything he had to say, but I do have a lot to say around that conversation.”

Heavin then joined the broadcast for approximately 50 minutes. During his appearance, Heavin said of COVID-19, “We know that it’s a weaponized virus because we see the RNA strands that were put into this virus from HIV, from MERS, and from the SARS virus. There’s no way this could have happened in nature.” As for who made COVID-19, Heavin pointed to “the powers that be in this country who want to destroy [Donald] Trump’s presidency.”

Heavin also said, “I’m trying to get to Trump to make him aware that this is not a nonevent. This is a very nefarious act against him.” Heavin also pushed the conspiracy theory that coronavirus was designed to target certain races: “This virus was designed to kill primarily Asian people. Now the problem is it’s going to kill a lot of Europeans and non-Asian people because it’s still lethal. But that’s one more evidence that it was designed as a bioweapon to attack China.”

Heavin was joined later during his appearance by Infowars contributor Mike Adams. Heavin said to Adams, “Mike, I’ve been telling everybody I know to go to NaturalNews.com because you have been the most effective leader in getting the truth to the American people, and I want you to know that in my visit with the governor today, I’m so grateful that I had your information to share with the governor. … You were an instrumental part of that conversation.”

The Daily Beast describes Adams and his Natural News website as “a powerful conspiracy empire,” noting that Natural News was followed by nearly 3 million people on Facebook before the platform banned the page. According to The Daily Beast, “Natural News has spent the past 10 years moving from relatively innocent claims about the benefits of herbal remedies, to full-blown culture war, with a side business of selling survivalist gear,” and Adams “has a history of shady business ventures, many of them raising money off moral panics.”

Adams has been making outlandish claims about coronavirus during his frequent appearances on Infowars broadcasts. In recent weeks, Adams has claimed:

The Associated Press reported that as of March 12, “Texas Gov. Greg Abbott isn't making decisions on canceling public gatherings in response to the coronavirus outbreak, even as some local officials seek guidance and other U.S. governors urge bans on big crowds and school closures.” Abbott reportedly told local government leaders on a recent call: “Without being able to be there, without knowing all the facts on the ground, I wouldn't be able to tell you what is the right thing to do other than use your best instincts.”

On March 13, Abbott “declared that the new coronavirus is a statewide public health disaster.”