Right-wing radio and Fox News host Dan Bongino has been banned from both YouTube and Google’s ad service for pushing COVID-19 misinformation, but Facebook has allowed him to continue similar behavior on its platform, even though it also has policies supposedly prohibiting it. In fact, Bongino’s Facebook videos (including clips from his show) earned nearly 900 million post views since March 23, and he has spent at least $50,000 on Facebook ads since 2018 that link to his website and promote his show.

On January 26, YouTube permanently banned Bongino — removing his two channels and banning him from creating any new ones — after he repeatedly posted COVID-19 misinformation and attempted to evade suspension. Two days later, Bongino also lost his ability to earn ad revenue from YouTube’s parent company, Google, when the platform revoked his site’s AdSense account for persistently violating publisher policies against COVID-19 and election misinformation.

YouTube's and Google’s actions against Bongino are far too late, as the companies have already enabled his quick rise as a prominent right-wing media personality pushing pro-Trump messaging and misinformation. In fact, Bongino is one of several conservative commentators who aired full-length videos of his radio show on YouTube, which often earned hundreds of thousands of views each. By the time YouTube banned him, he reportedly had 882,000 subscribers and over 122 million views on his main channel.

Facebook has not taken any similar action against Bongino — whose page has 4.9 million followers — even though he has repeatedly used the platform to push false and sensational claims, including content that seemingly violates Facebook rules against COVID-19 and election misinformation. In fact, his Facebook page routinely earns millions of interactions and is consistently among the top-performing link posts from U.S. pages each day.

In a previous Media Matters study, we found that Bongino’s Facebook posts earned over 351 million interactions between January 1, 2017, and March 22, 2021 — with a drastic increase in 2020 and 2021. Posts on Bongino’s page that garnered extensive engagement included those calling NBC’s Savannah Guthrie “unhinged,” linking to Bongino’s articles accusing Kamala Harris of doing “a lot of lying,” and asking, “Are you sick of hearing celebrities talking about politics?"

Since our last study, Bongino has continued to earn significant engagement on his Facebook posts, including short clips from his digital radio show and links to his videos on the streaming site Rumble. (One of Bongino’s now-removed YouTube channels hosted similar short clips from the show.) Additionally, Facebook has earned tens of thousands of dollars in revenue from Bongino’s ads, including those that promote his show and link to his website.

Using the data analytics tool CrowdTangle, we analyzed Bongino’s posts since our last study less than a year ago and found that he has posted on Facebook 8,065 times, and 2,924 of the posts — or 36% — contained videos. These videos have earned nearly 78 million interactions and nearly 890 million post views. Some of these videos were clips from his radio program, The Dan Bongino Show.

Bongino and other right-leaning pages exploit Facebook’s algorithm that rewards sensational and divisive content, particularly videos. Facebook has repeatedly caved to false allegations of censorship and bias from right-wing politicians and media figures, and the company has given right-wing entities free rein to spread misinformation on its platform and even refused to make changes that would reduce false and divisive content to avoid their ire.

At least 11 of Bongino’s videos on Facebook have over 10 million total views each. These videos — which were included in 45 of his posts — contain clips from Bongino’s show and often sensational content, such as “resurfaced video” that Bongino characterizes as “devastating to Joe Biden’s campaign,” another video mocking “liberals losing their minds over the new CDC mask guidance,” and details of supposed “bombshell text messages” about “the Russia collusion hoax."

Since March 23, over 60% of Bongino’s posts — or 4,896 — have included links. These posts earned over 105 million interactions on Facebook, and nearly all of them linked to either the alternative video platform Rumble or Bongino’s websites.

Notably, nearly 70% of Bongino’s Facebook posts with links — or roughly 40% of all of his posts — directed users to Rumble, an alternative site with lax moderation rules in which Bongino holds an equity stake. Rumble also holds an equity stake in Bongino’s payment processor and airs his show in an exclusive window daily on the video service.

Some of Bongino’s posts linking to Rumble even direct Facebook users to full-length episodes of his radio show, The Dan Bongino Show. Some of these episodes promote pandemic misinformation, unsubstantiated claims, conspiracy theories, and other extreme rhetoric — similar to the content that got him banned from YouTube and Google AdSense, and some of which seemingly violates Facebook’s policies as well. Notable examples include: 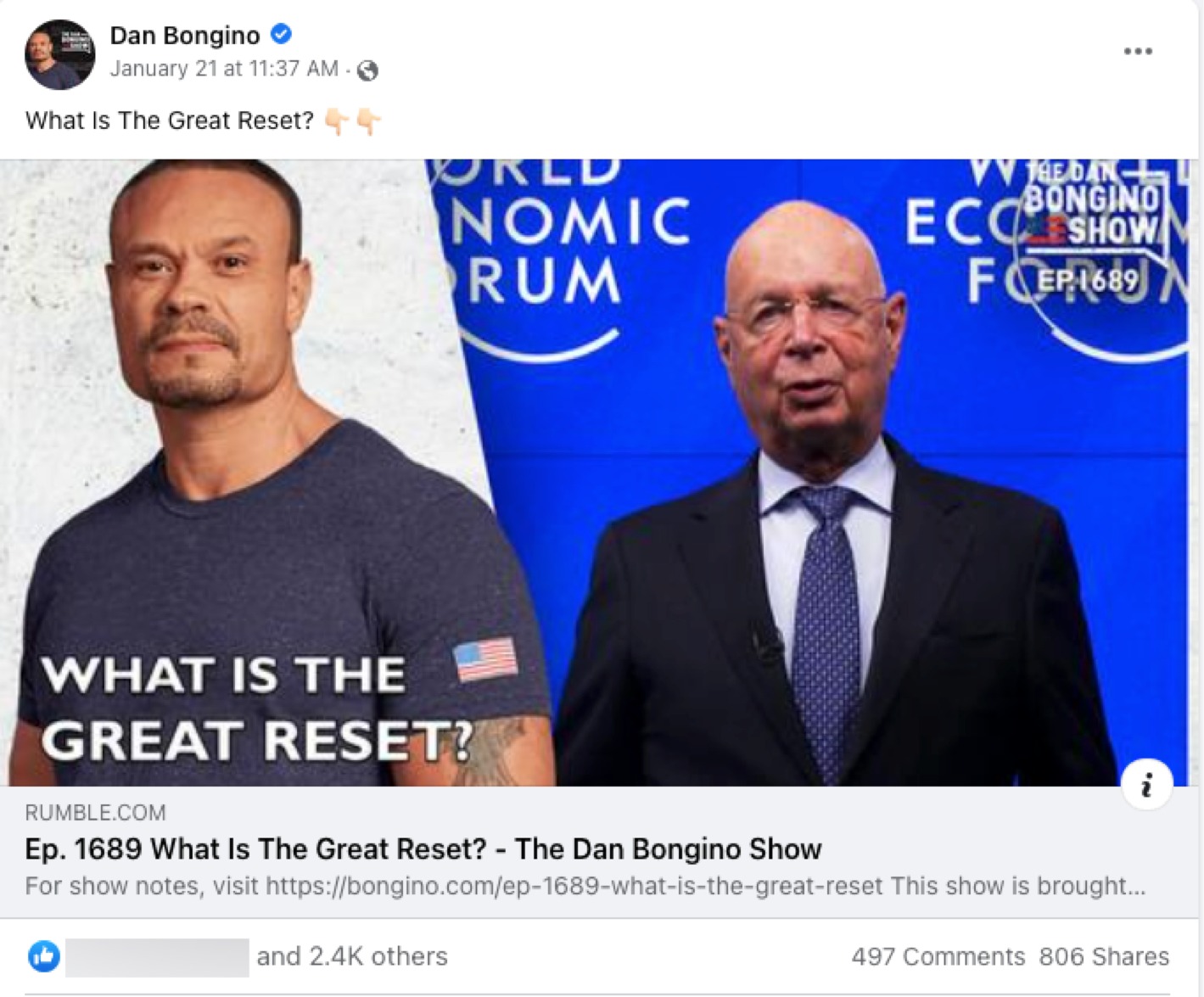 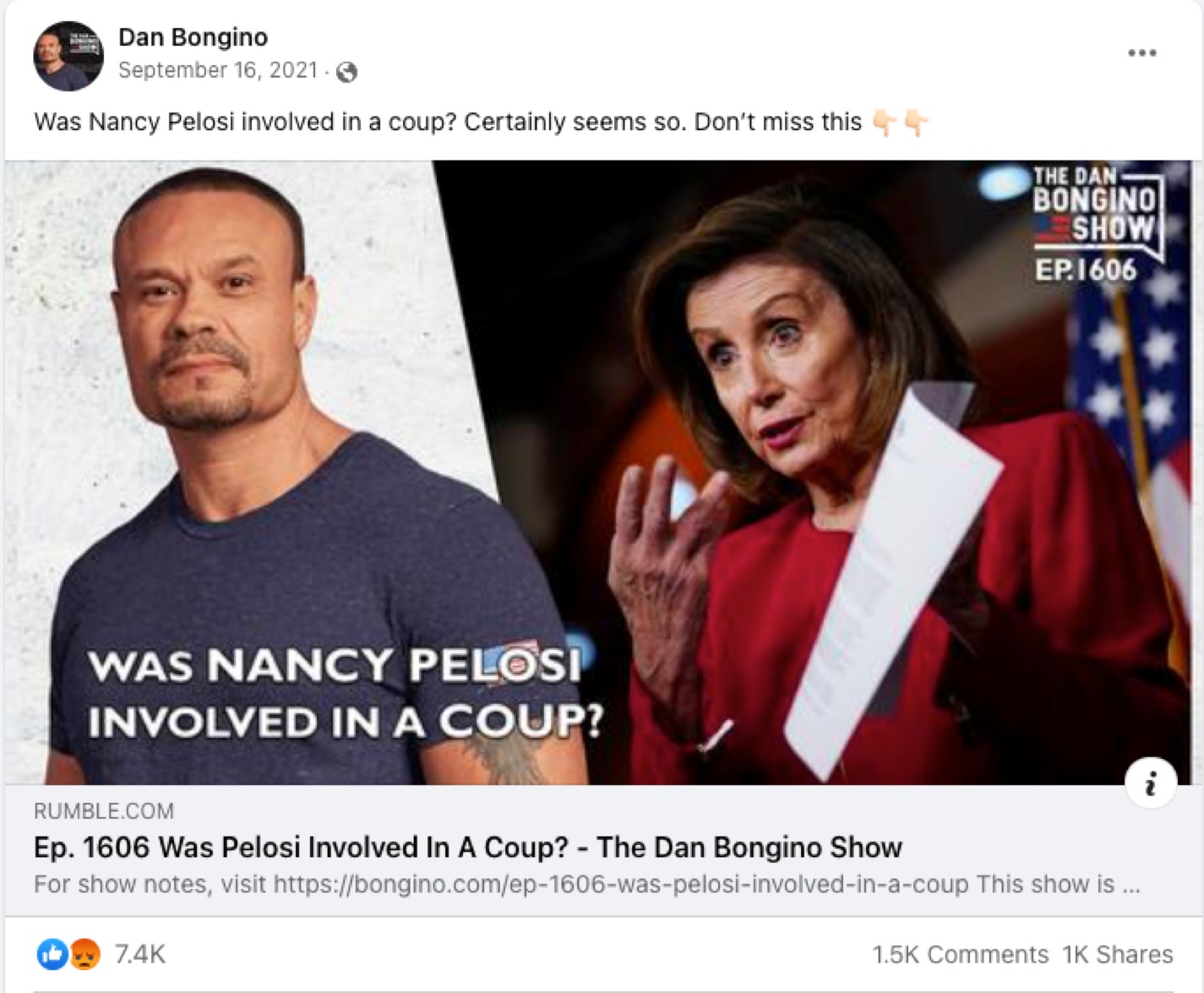 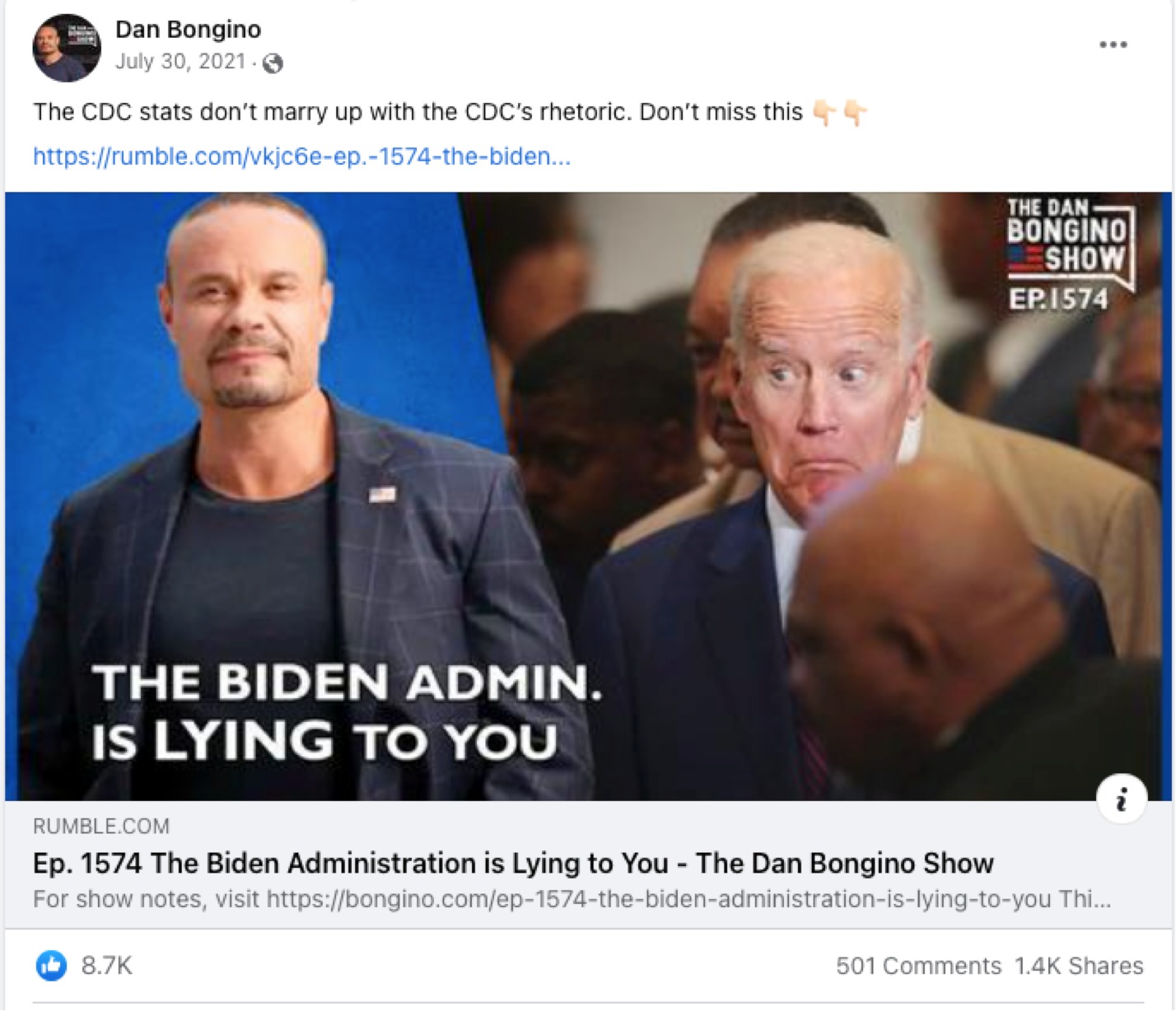 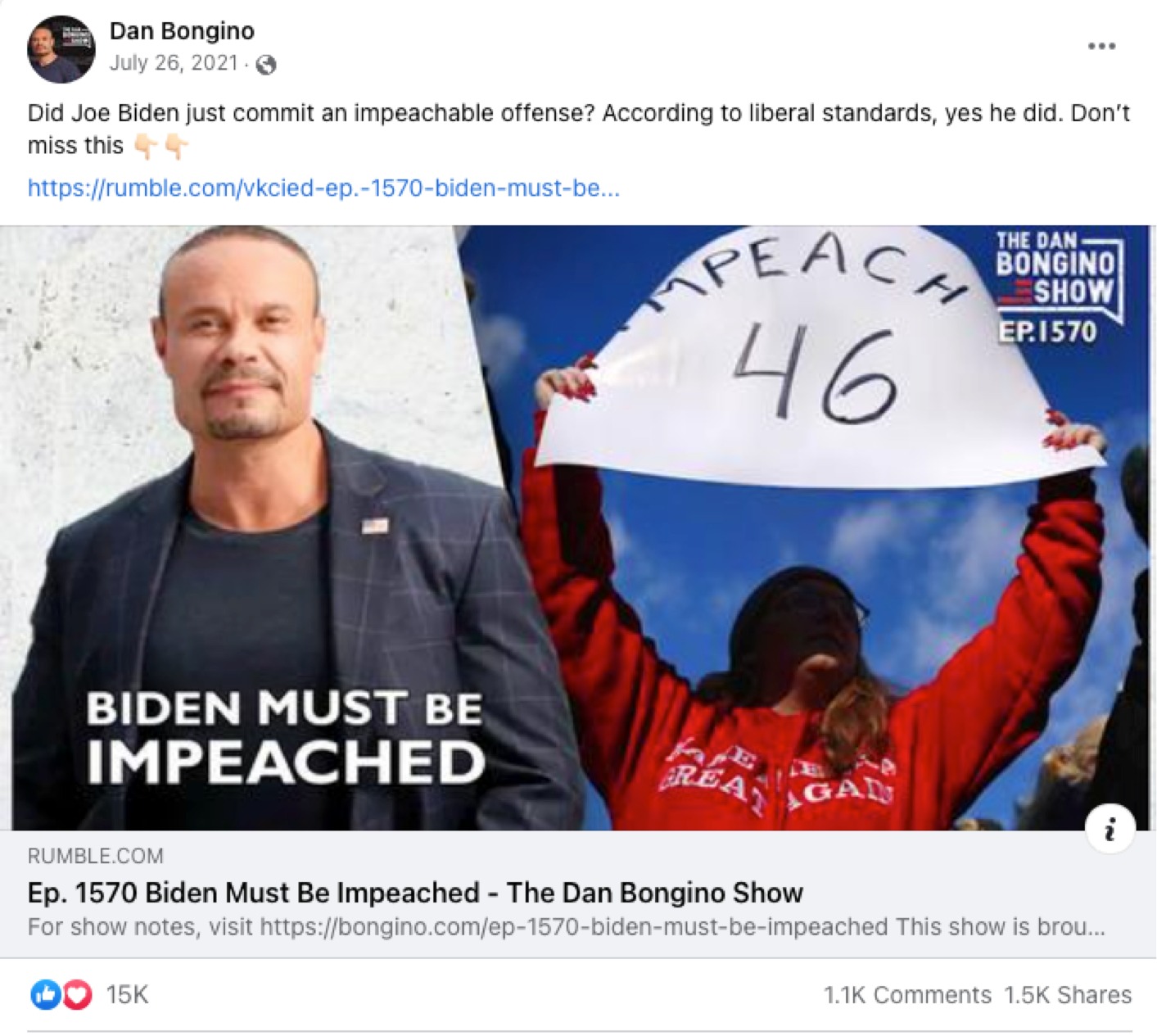 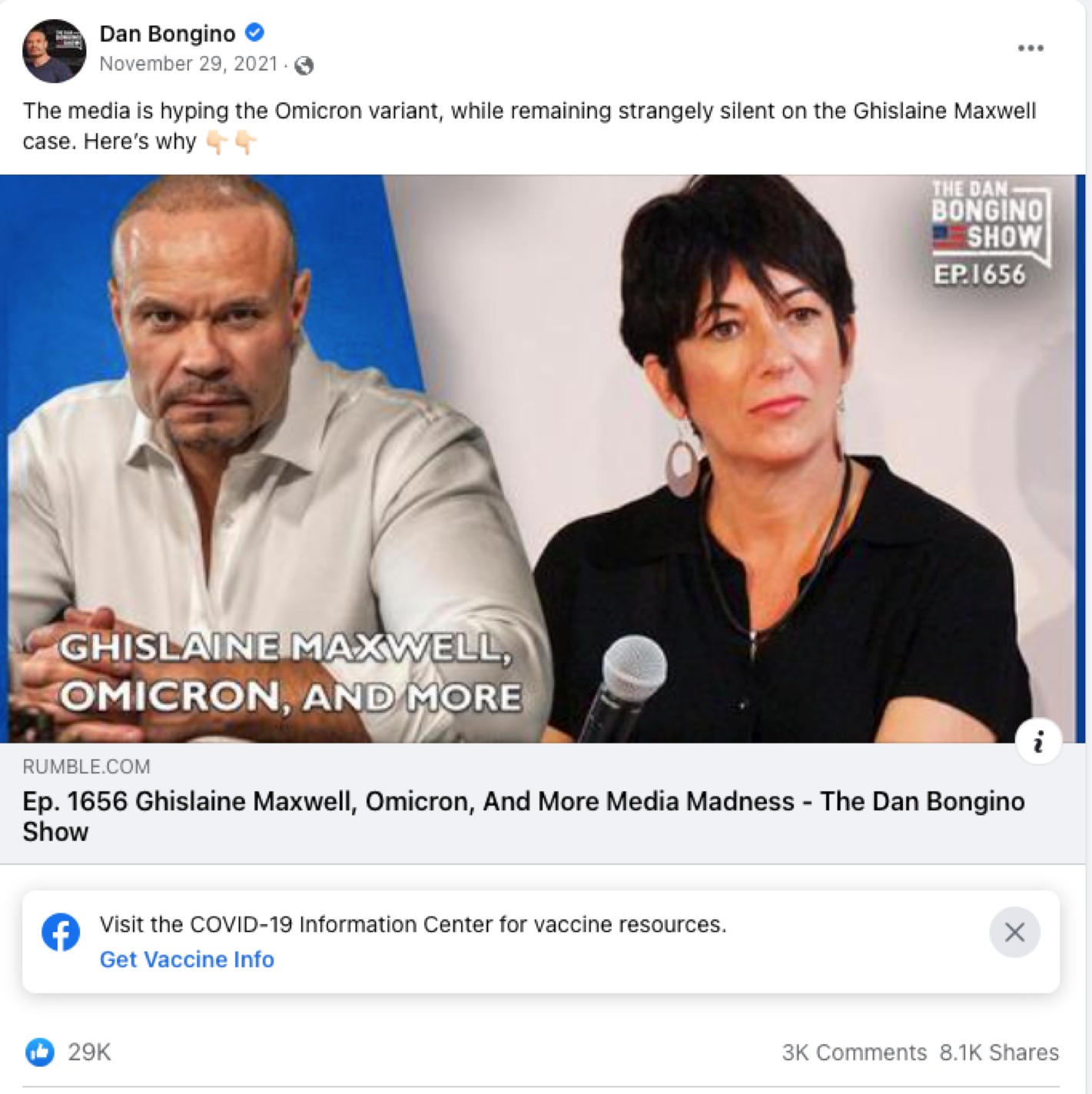 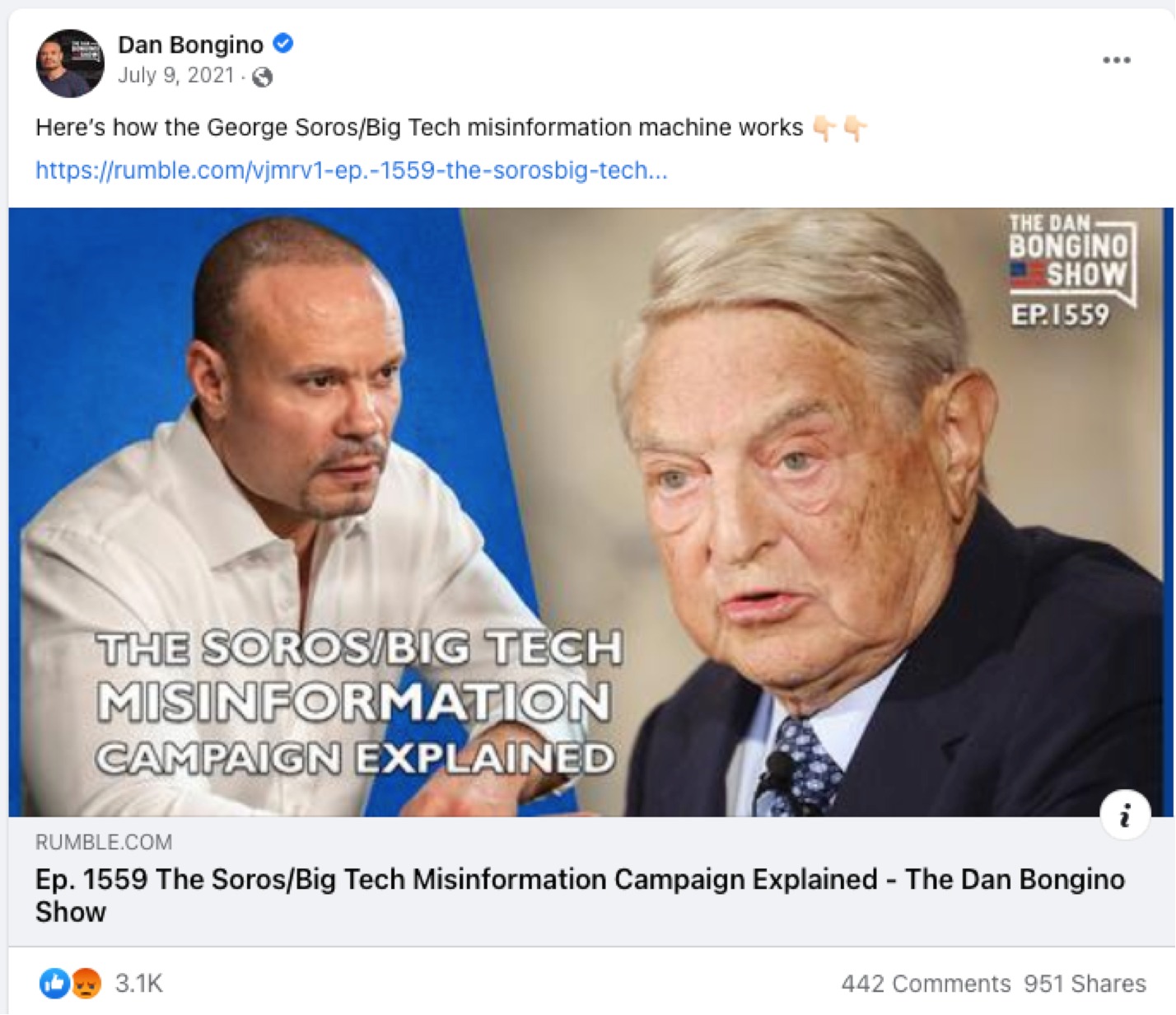 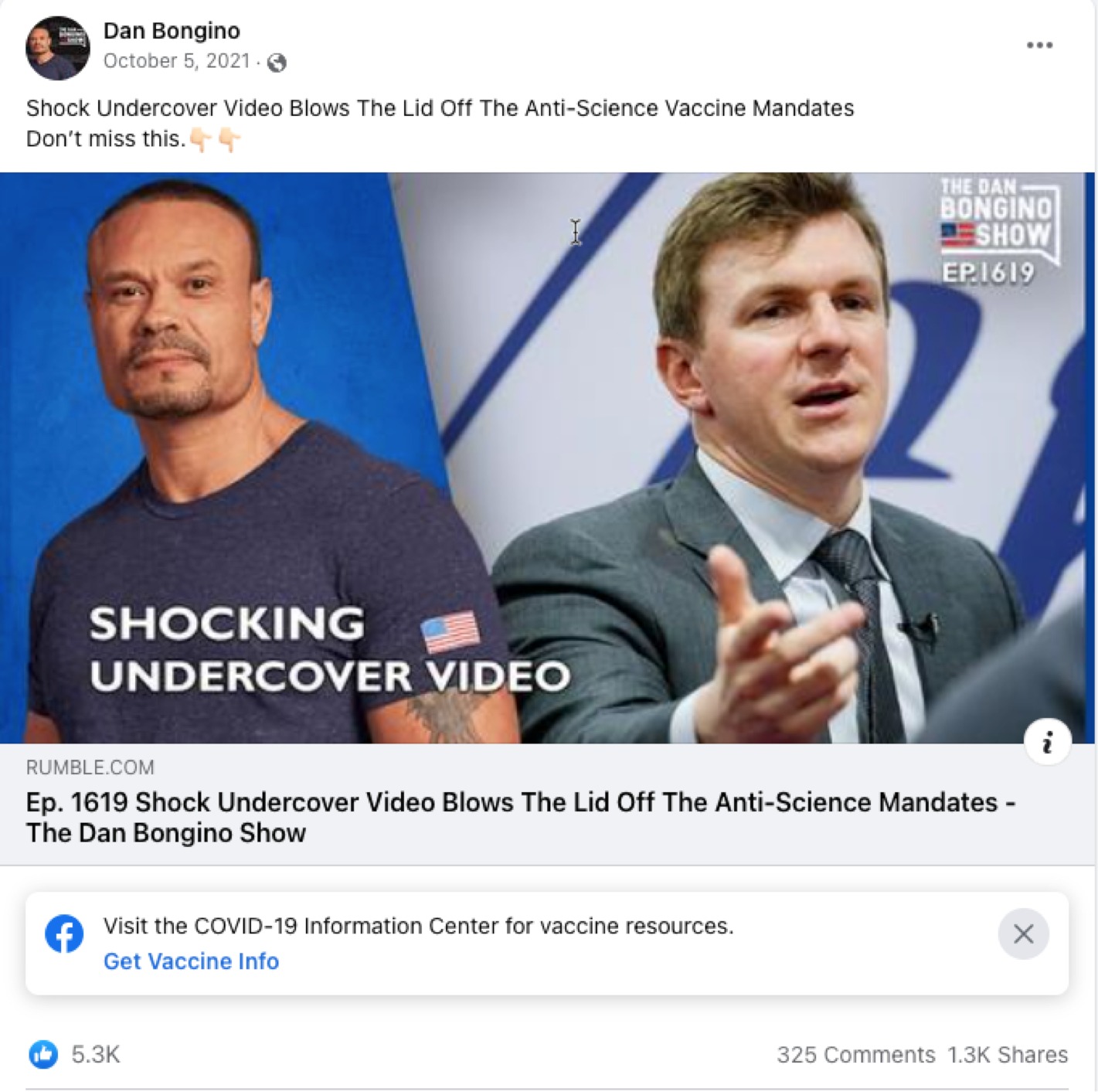 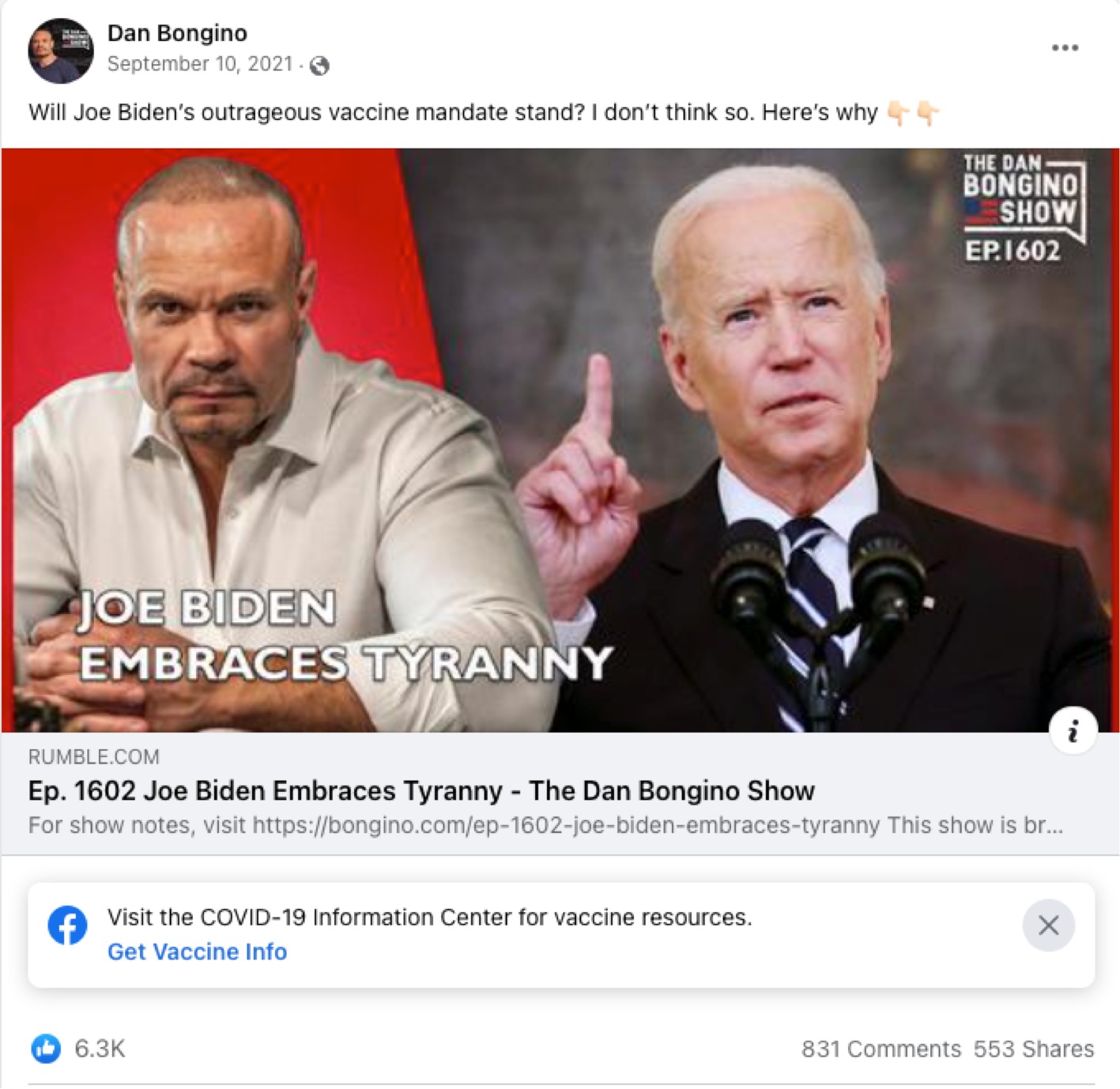 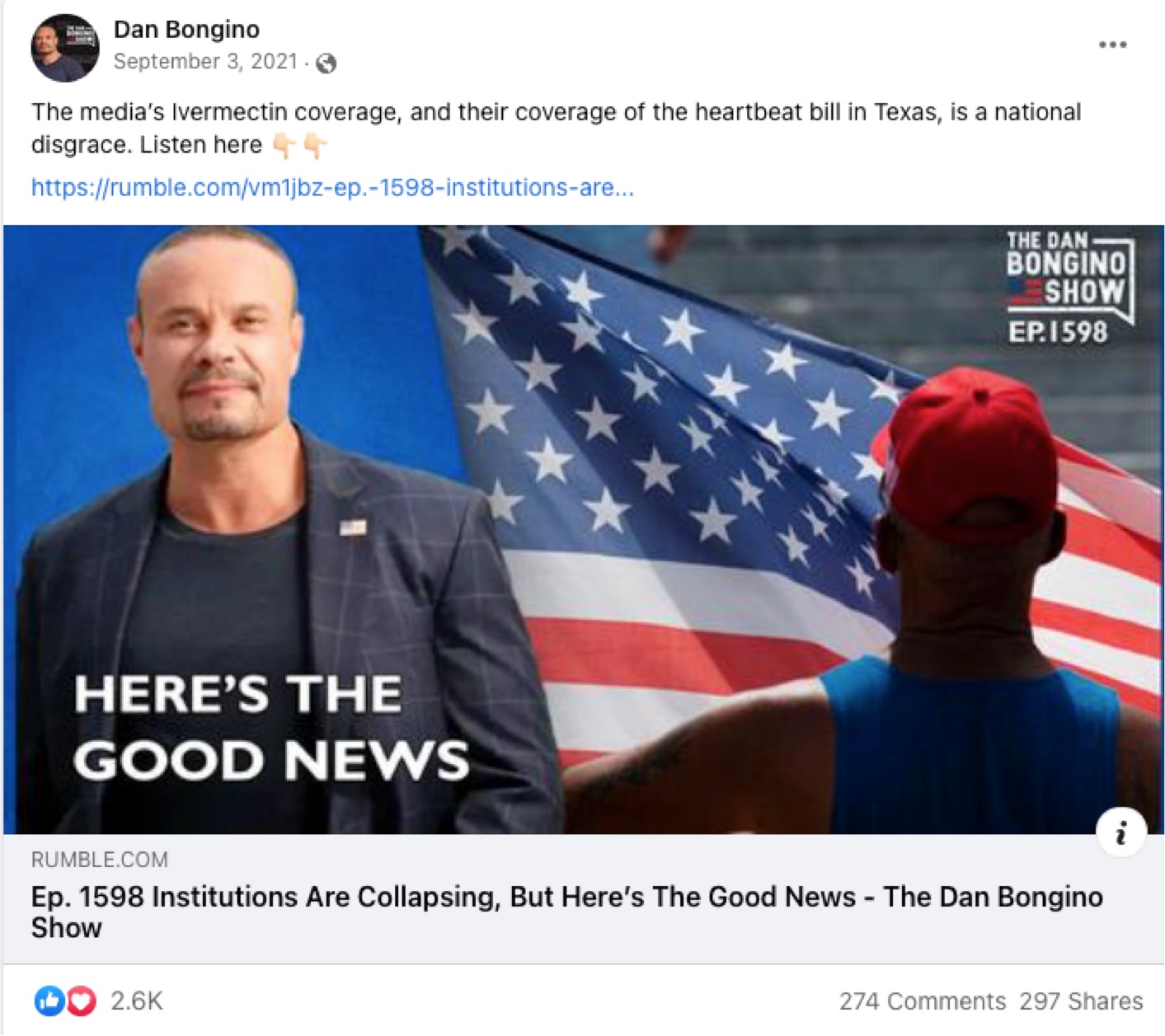 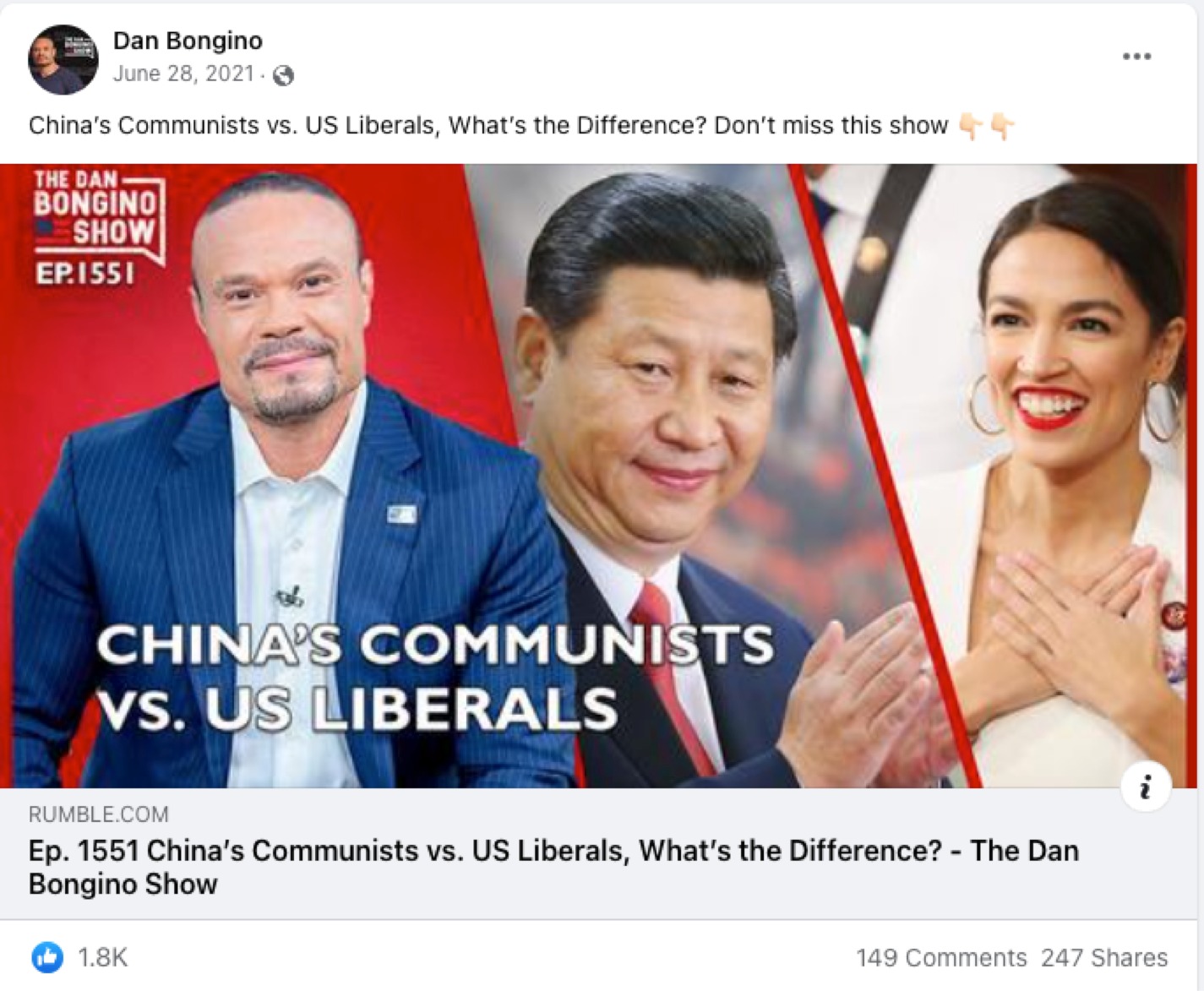 Additionally, nearly 30% of Bongino’s posts with links — or almost 20% of all of his posts on Facebook — direct users to his websites, including bongino.com, the site for his radio show that also houses sensational and misleading articles. Some of these posts have earned hundreds of thousands of interactions.

Facebook has earned at least $48,000 from Bongino’s ads, including those that promote his show and link to his website

Although Google’s AdSense has banned Bongino from monetizing his website using its service, Facebook has not taken similar action.

In fact, using data from the Dewey Square Adwatch tool set, Media Matters found that Bongino has run over 200 Facebook ads that earned between 7.4 and 8.5 million impressions since 2018. These ads have earned Facebook more than $50,000 in revenue.

Nearly all of the ads promote Bongino’s show and link to his website — which features the same sensational and false content that got Bongino banned from YouTube and AdSense.

While promoting Bongino’s show and website, his Facebook ads also tell users to “tune out the liberal media,” “tune into the truth,” or “tak[e] on leftist extremists”: 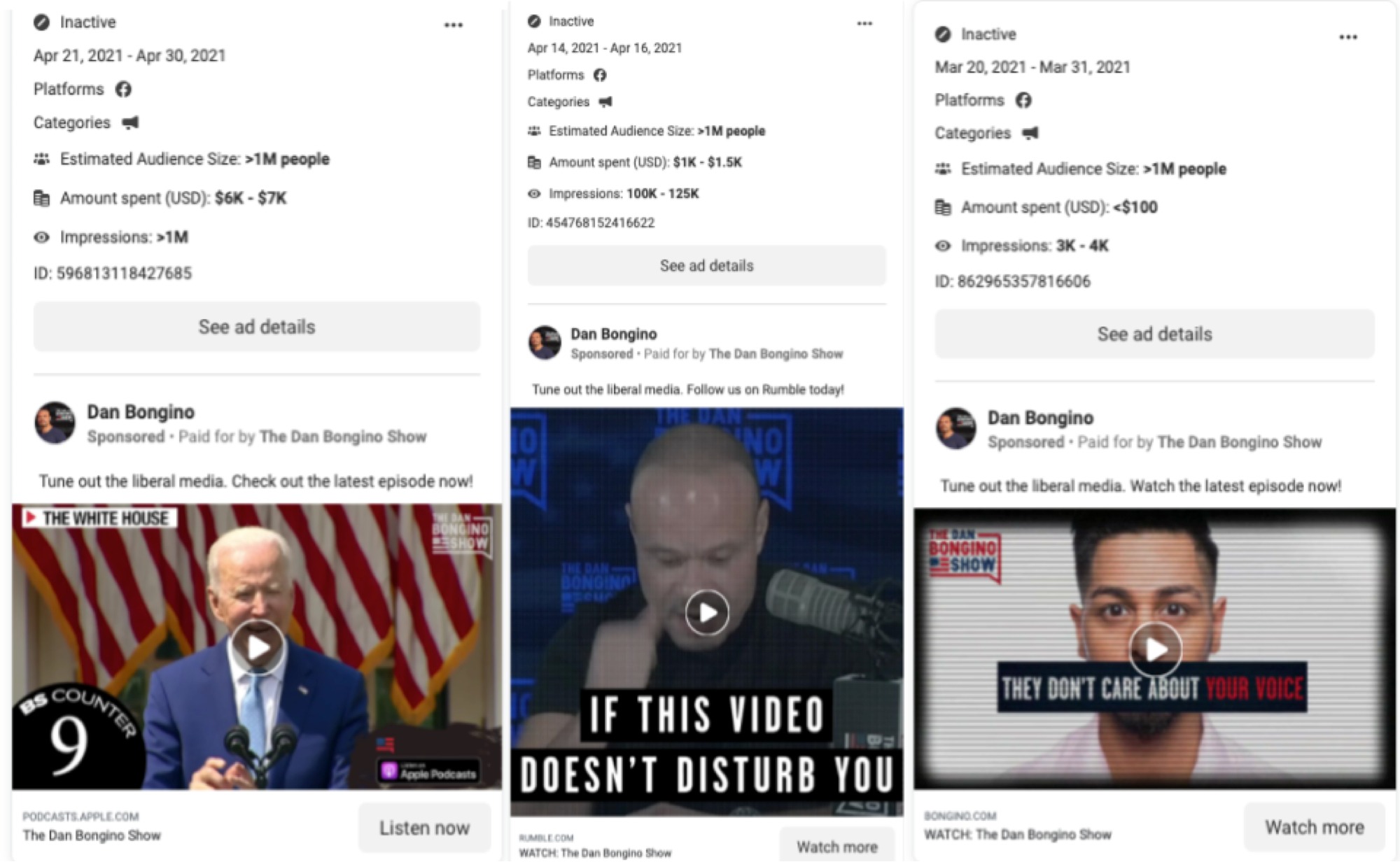 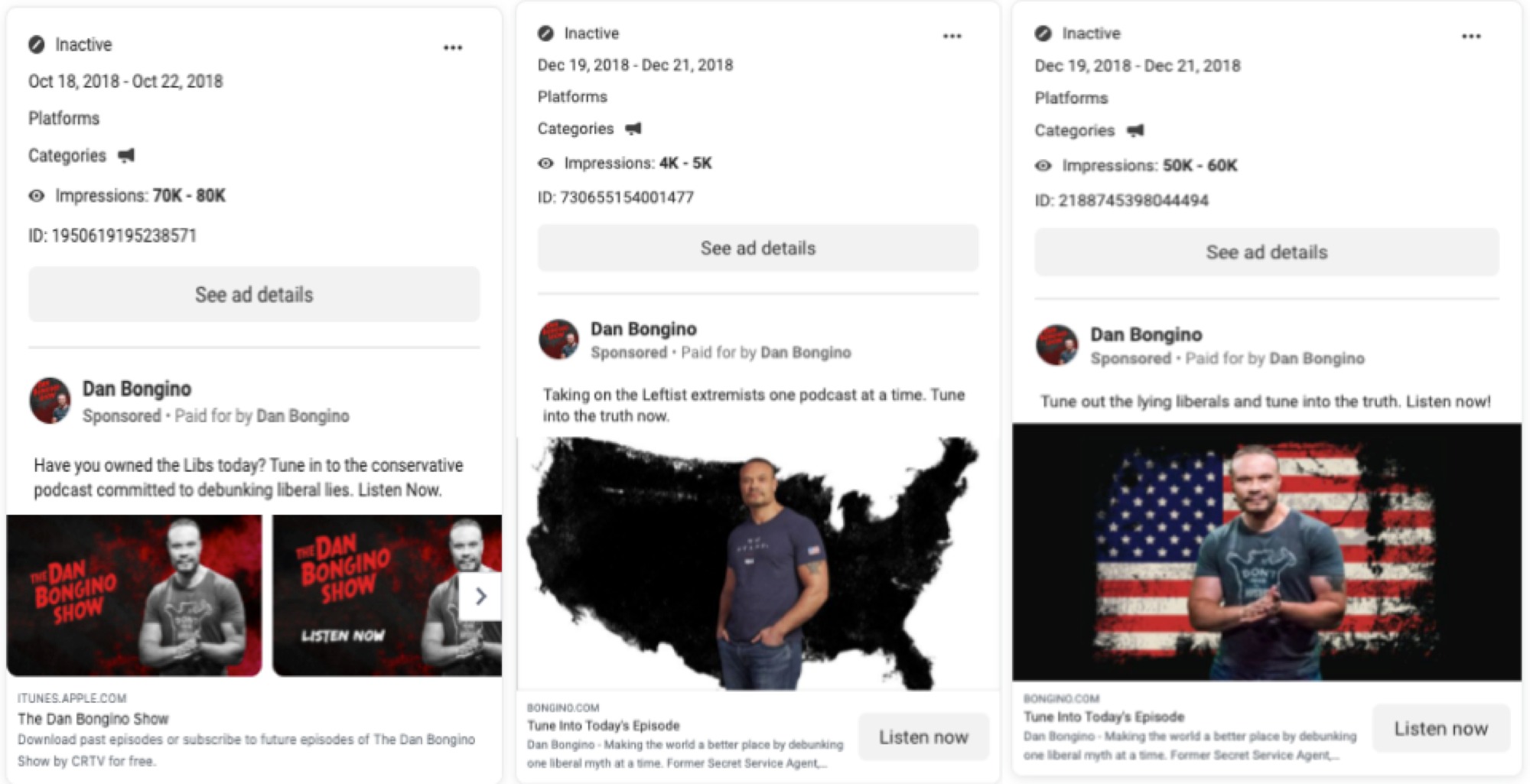 Some of his ads even directly attack social media companies like Facebook, claiming that they are censoring him “and crushing you from speaking out.” (Media Matters has repeatedly debunked such claims of conservative censorship on social media.)

The YouTube and Google AdSense bans of Bongino's misinformation were the right move — but they should have come sooner. Facebook’s continued inaction toward the same misinformation shows that the social media company refuses to do the bare minimum to protect its users.