Harmful rhetoric from Fox News host Tucker Carlson is being widely shared across Facebook. Recent videos with his anti-vaccine and racist talking points have been viewed over 5.8 million times in the last week and shared on the platform over 125,000 times -- whether posted by Carlson’s Facebook page or amplified by other right-leaning pages.

Fox News hosts including Carlson, Laura Ingraham, and Sean Hannity have spent months using their prime-time platforms to question whether COVID-19 vaccines are safe or even necessary to end the pandemic. On April 13, Carlson went as far as speculating that public health experts still recommend people wear masks and practice social distancing after being vaccinated because “maybe it doesn't work and they’re simply not telling you that.” He continued to sow doubt about COVID-19 vaccines throughout the week. 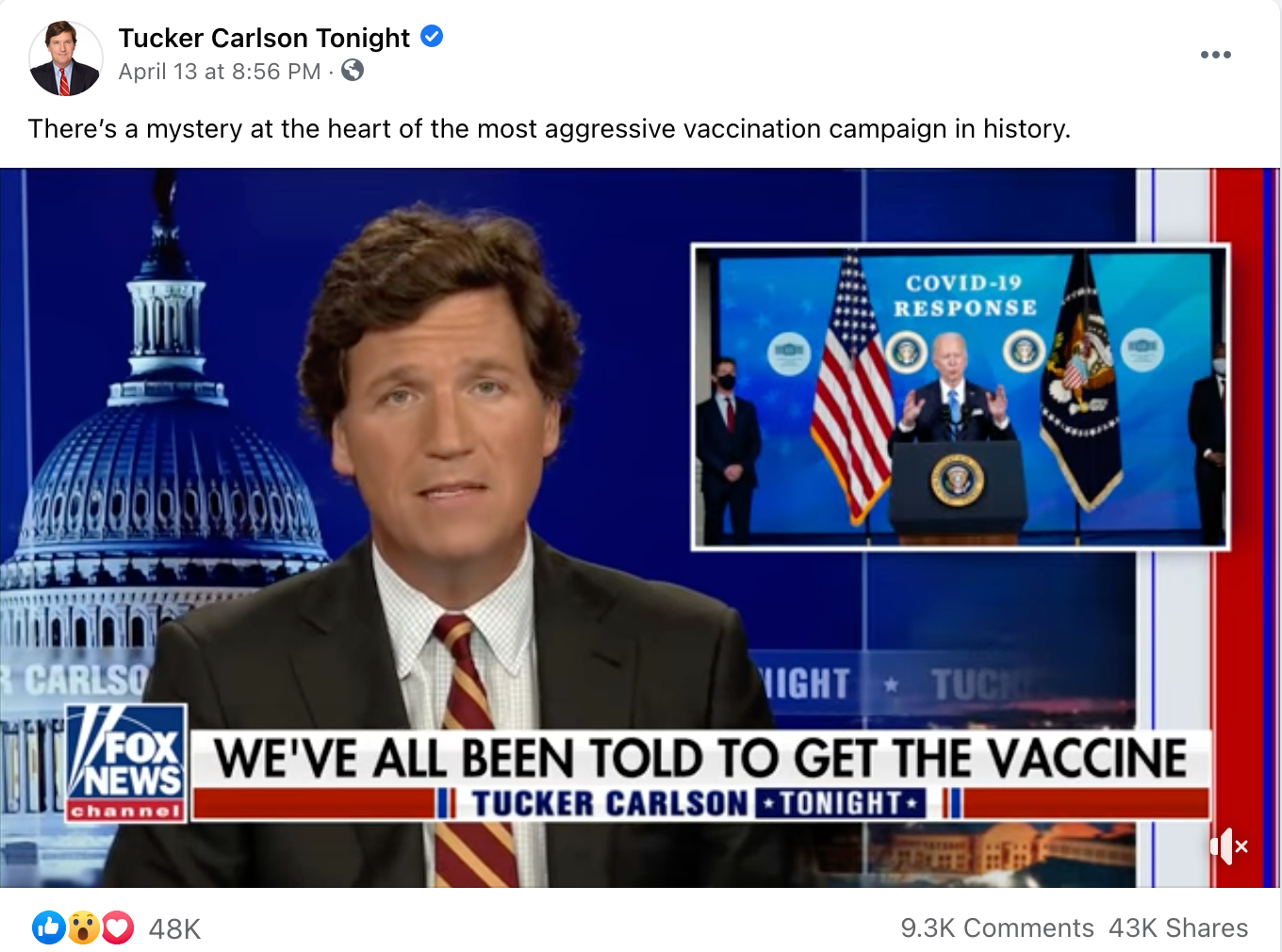 Another clip from Tucker Carlson Tonight’s April 13 anti-vaccine segment was also among the top 10 most shared videos from political pages between April 13 and 16. This video was shared over 24,000 times and viewed roughly 675,000 times. 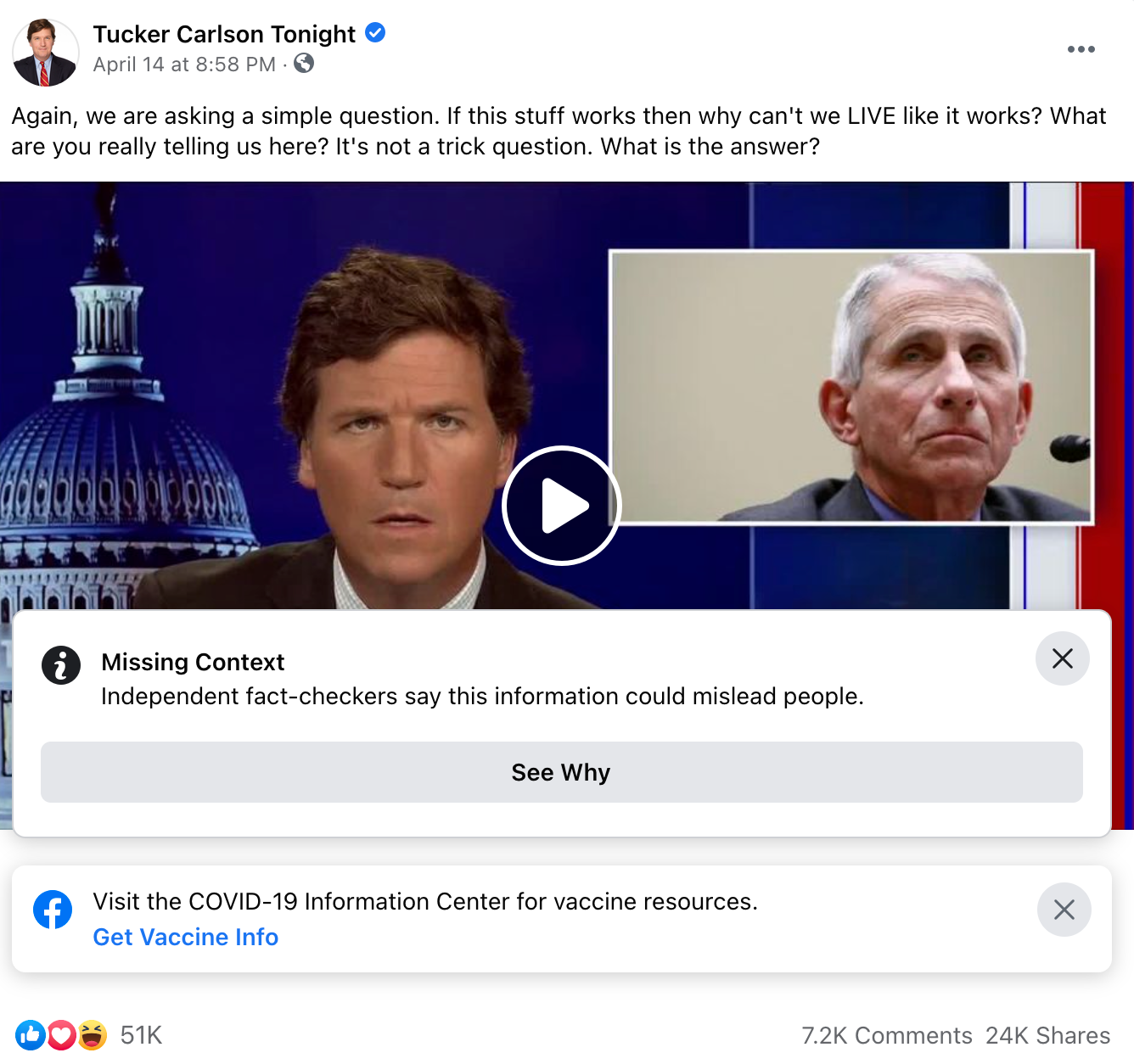 Carlson also has a long history of pushing white supremacist talking points on his Fox News prime-time show, which has earned him praise from white nationalists. Carlson continued spreading bigoted, racist narratives on April 8, giving full endorsement to the white nationalist “replacement” conspiracy theory that has motivated mass shootings and even defending his endorsement in subsequent episodes. These examples also quickly spread among popular right-wing pages on Facebook. 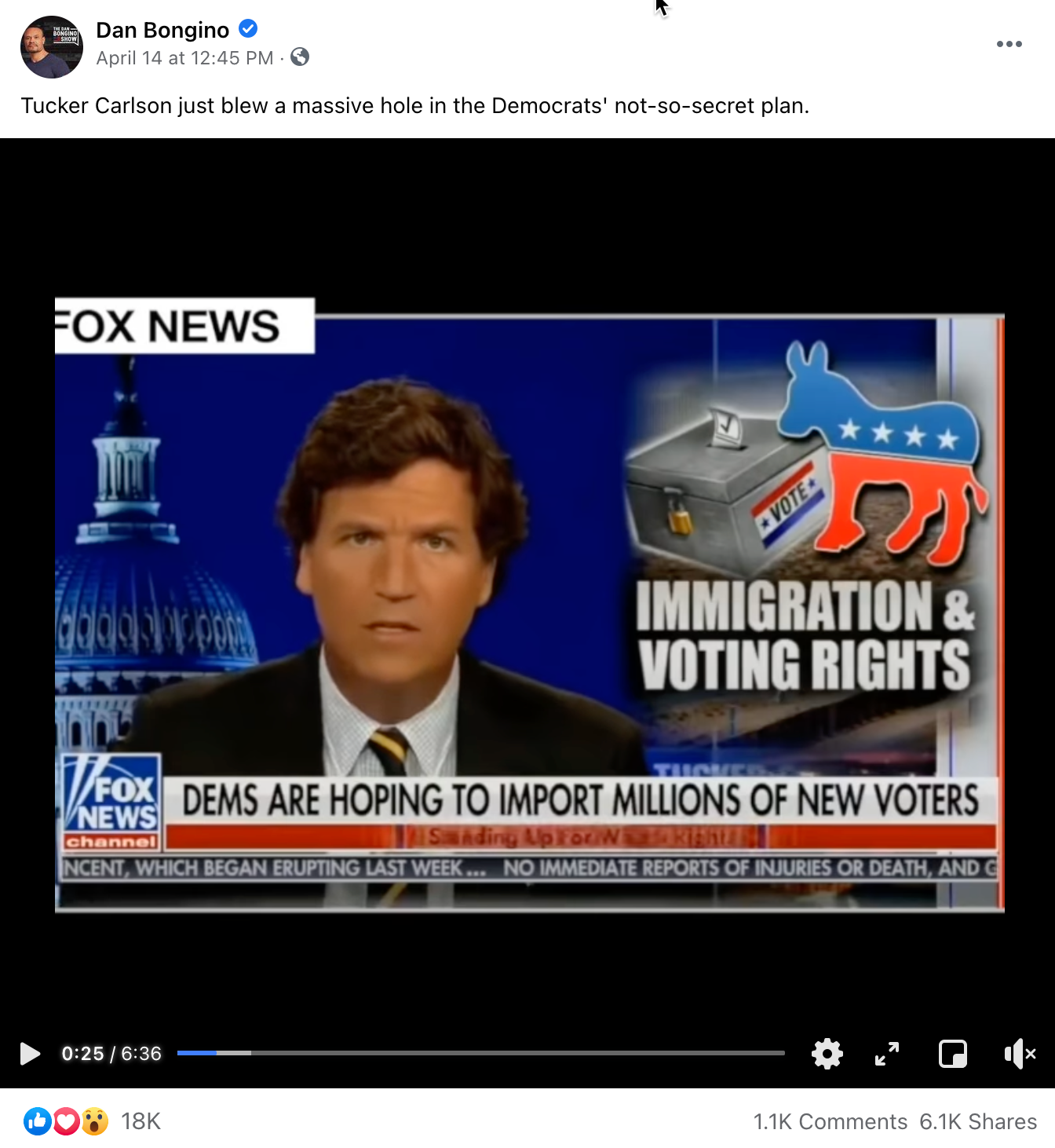 Between April 13 and 16, right-leaning Facebook pages posted at least 20 videos highlighting clips from Carlson’s shows on Fox News and Fox Nation or promoting his anti-vaccine and white supremacist talking points. These posts were shared roughly 55,000 times, even though some were labeled by Facebook’s independent fact-checkers as “missing context” or redirecting users to more authoritative sources to correct the Fox host’s misinformation. Most of the posts push anti-vaccine rhetoric or white supremacist talking points, including criticizing the Black Lives Matter movement, promoting voter suppression legislation, and pushing Carlson’s narrative of “white replacement theory.”

Notable examples of Carlson’s amplification by other right-wing media on Facebook include: 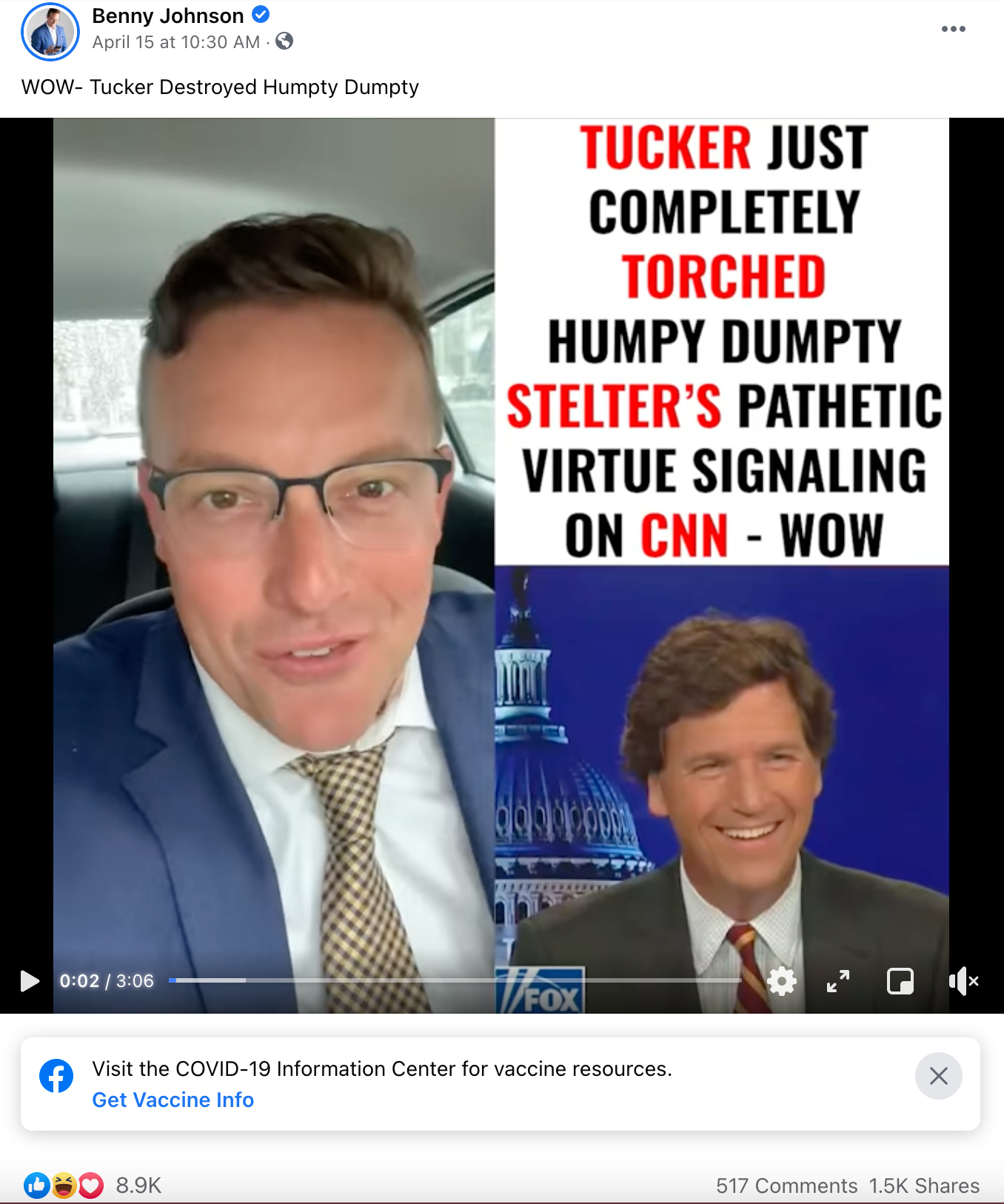 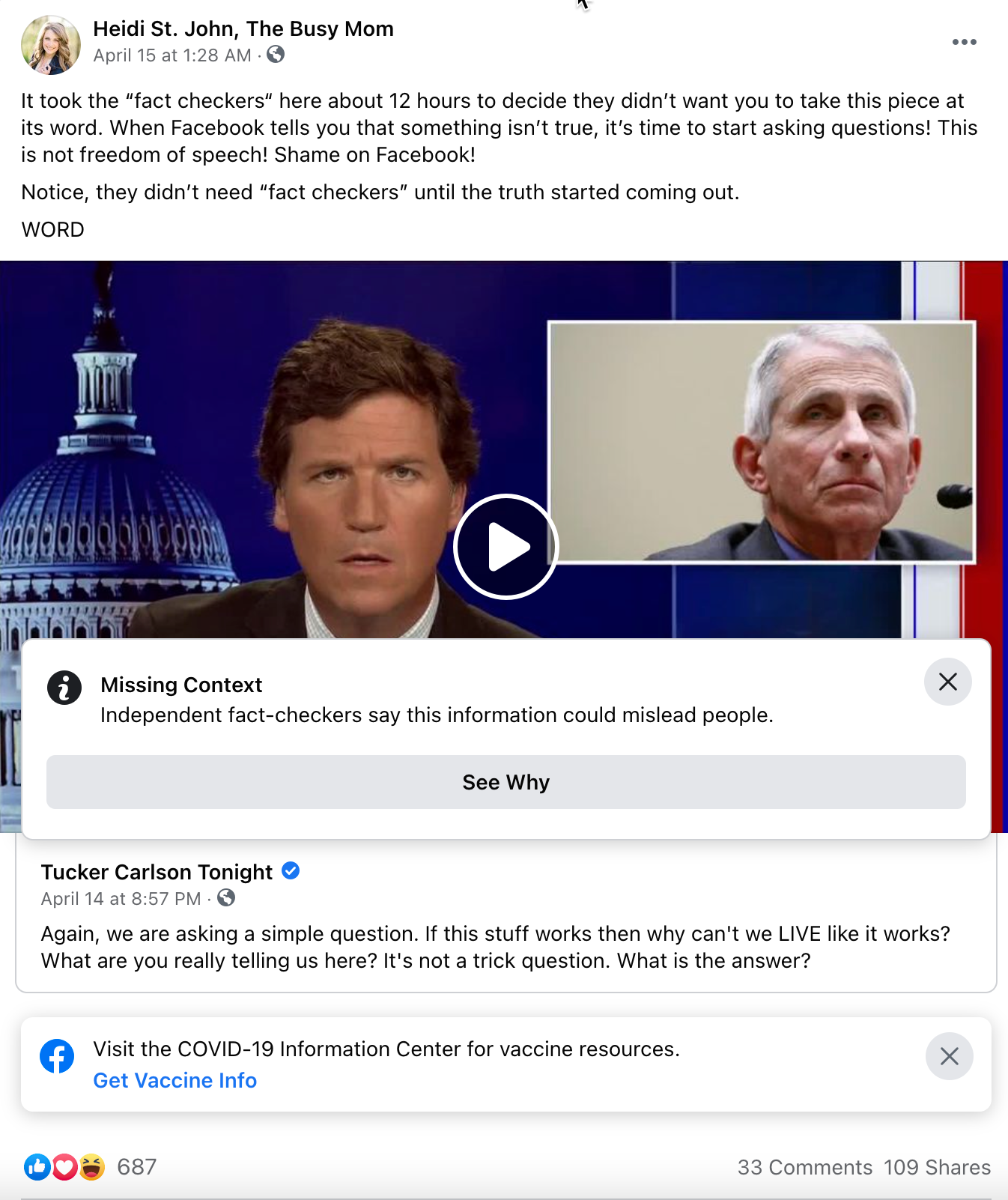 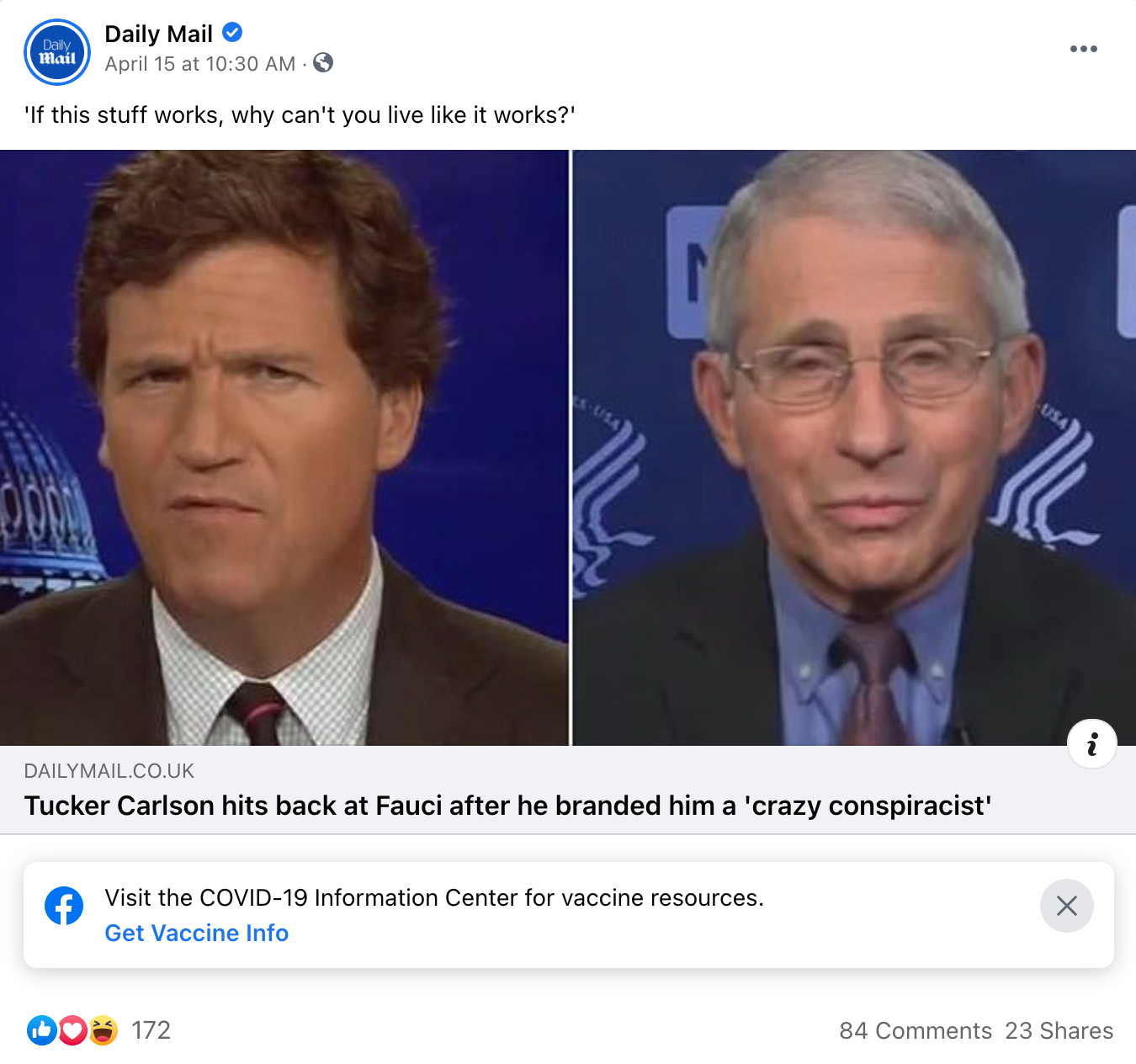 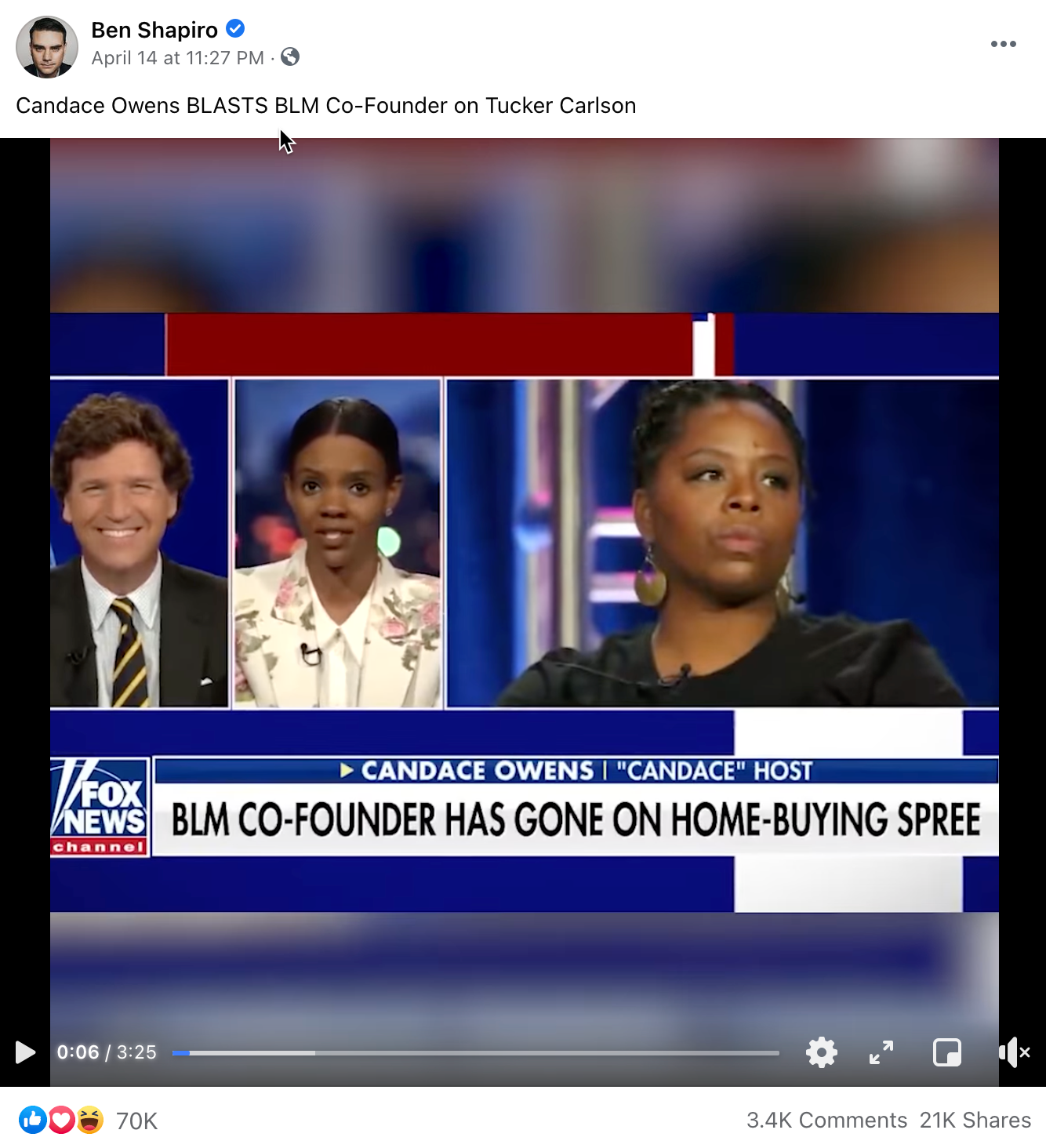 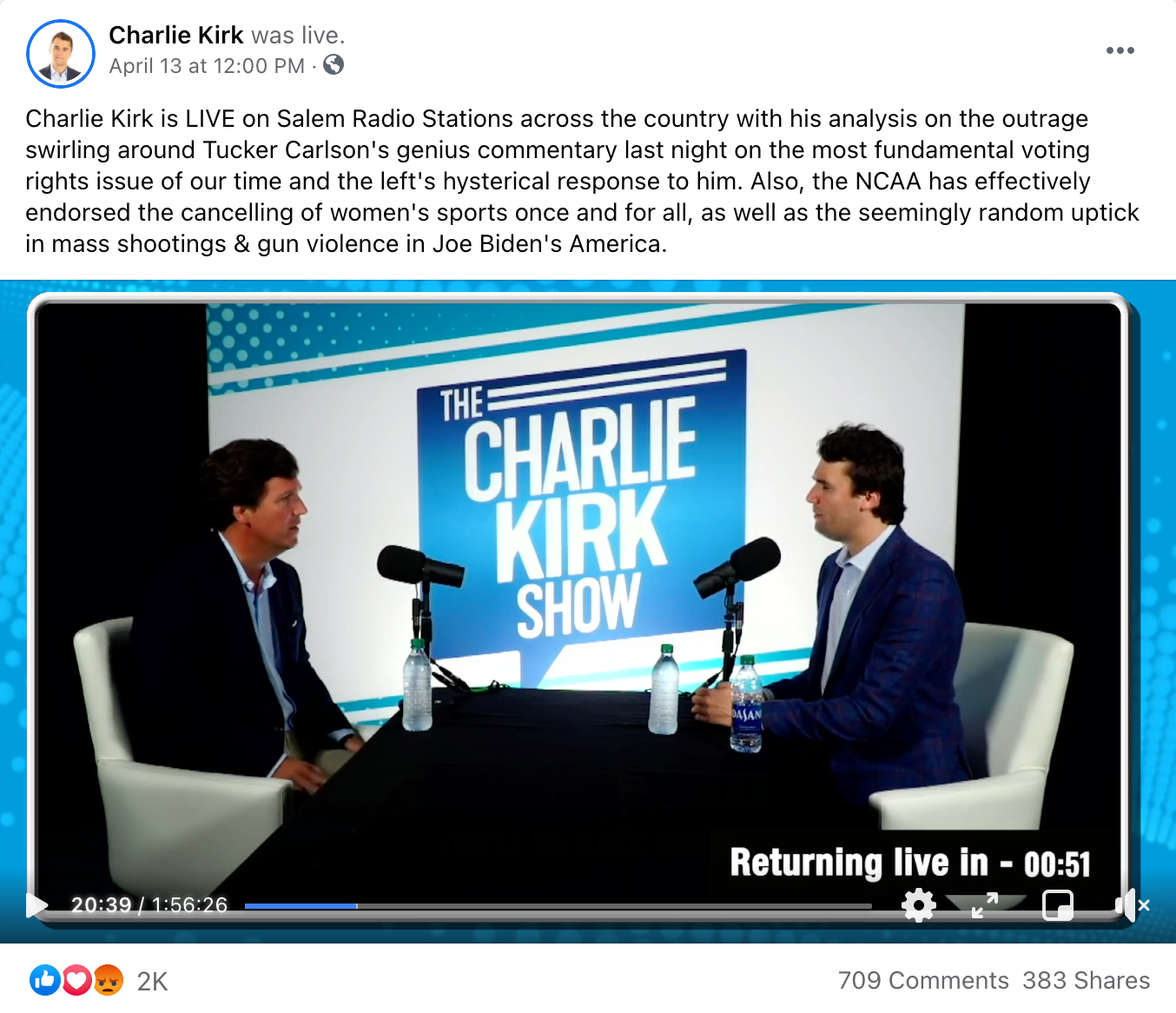 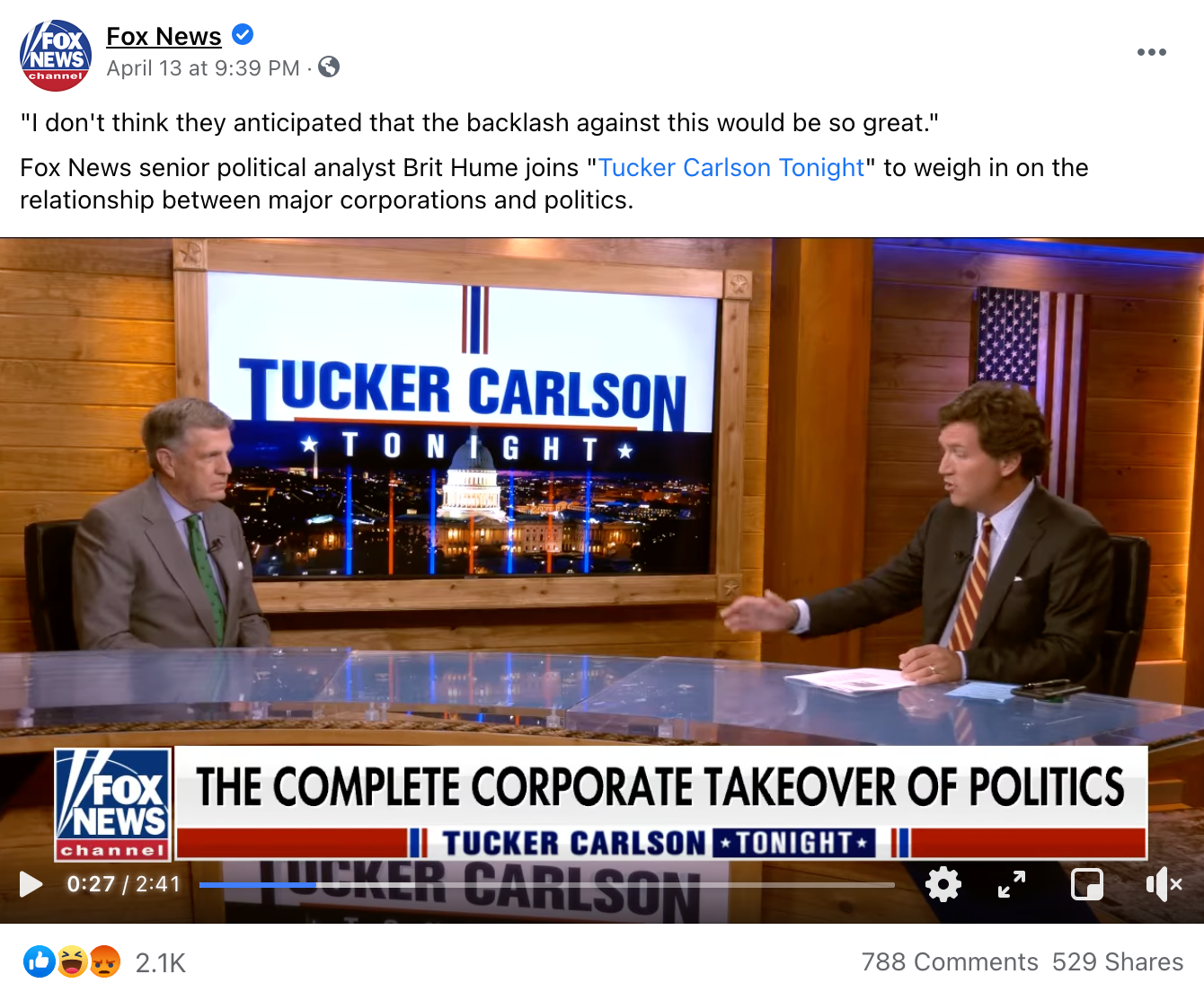 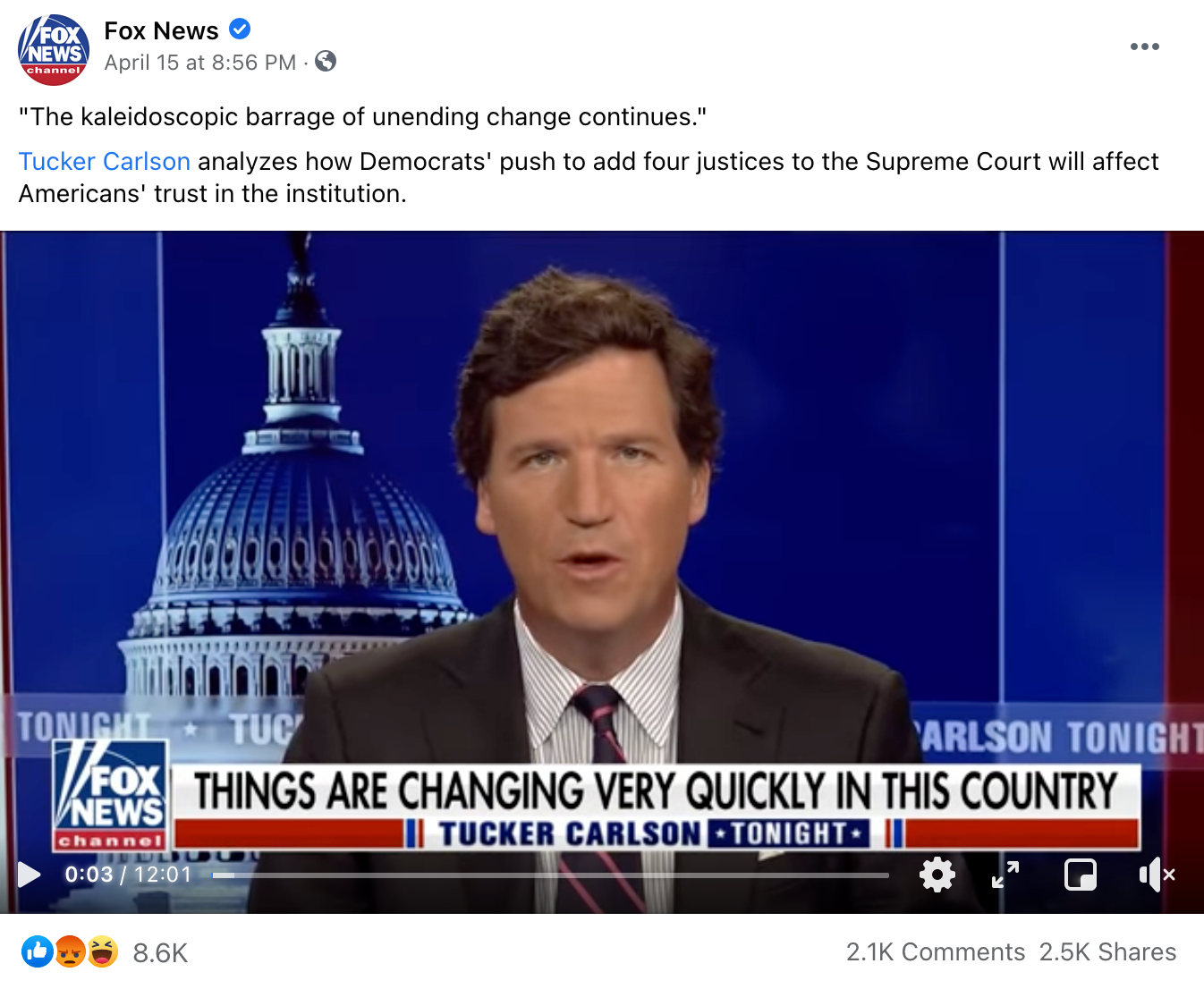 Using CrowdTangle, Media Matters compiled a list of 1,773 Facebook pages that frequently posted about U.S. politics from January 1, 2020, to August 25, 2020.

For an explanation of how we compiled the pages and identified them as right-leaning, left-leaning, or ideologically nonaligned, see the methodology here.

Using CrowdTangle, Media Matters compiled all 10,620 video posts by pages on this list posted between April 13 and 16, 2021, and reviewed data for these posts, including total views and total interactions -- reactions, comments, and shares.