Facebook is allowing The Daily Wire to once again flout its rules, with the outlet earning millions of impressions on ads about social issues, elections, and politics, which the platform has banned since Election Day.

Ben Shapiro’s right-wing media outlet The Daily Wire thrives on Facebook, consistently earning high engagement on its content promoting right-wing narratives -- partly because it uses a network of other Facebook pages to amplify material from its website. Facebook has also contributed to the outlet’s success, allowing it to break the platform’s rules against using coordinated activity without repercussion and even reportedly changing the News Feed algorithm to benefit right-wing sources like The Daily Wire.

On October 7, in anticipation of the presidential election, Facebook announced restrictions on “all social issue, electoral or political ads in the US after the polls close on November 3, to reduce opportunities for confusion or abuse.” Facebook ordinarily requires that ads that fall into this category include a disclaimer stating the name of the entity paying for them, but since November 4, Facebook has declared a “temporary period during which ads about social issues, elections or politics stop running.” At the time of publication, these restrictions are still in place and Facebook has not announced when they will be lifted, though the platform told advertisers on November 11 that it had extended the timeline for such advertising restrictions into December.

Since November 4, Facebook has removed at least 24 political Daily Wire ads, but they had already earned millions of impressions

Despite this ban, The Daily Wire has continued running political ads on Facebook, avoiding Facebook’s ban by running them without a disclaimer. The ads have earned millions of impressions before (sometimes) being removed.

According to Facebook’s Ad Library, at least 24 ads created by The Daily Wire after the election were removed, with Facebook noting, “This ad ran without a disclaimer. After the ad started running, we determined that the ad was about social issues, elections or politics and required the label. The ad was taken down.” Before these ads were removed, they ran on the platform long enough to earn a total of over 2.6 million impressions — and long enough for Facebook to earn at least $45,000 in revenue. 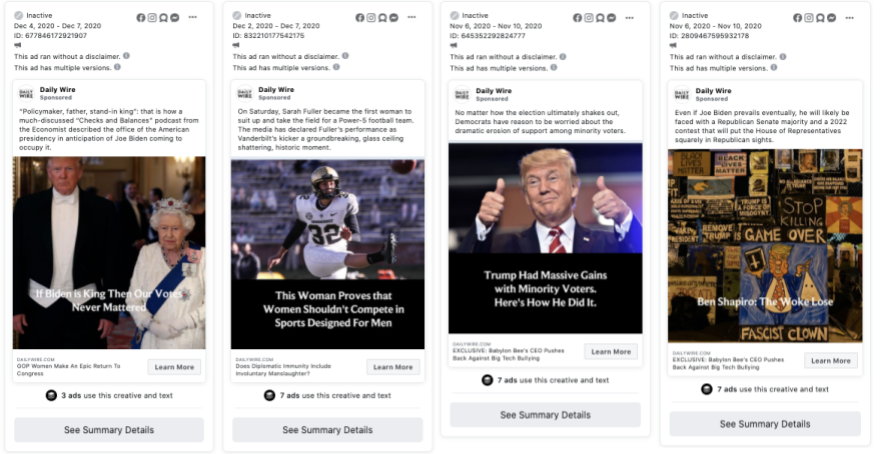 In addition to the ads that were removed, The Daily Wire had at least 62 ads running on Facebook as of December 7 and/or December 8 that were created after the election. A Media Matters review found that at least 50 of these ads appear to address social issues, elections, or politics, but ran without a disclaimer to circumvent Facebook’s current ban on these ads. These ads discuss subjects such as political ideologies, institutional governance, social rights, and/or economic policy in their text, in the image, or on the landing page linked in the ad. At the time of publication, 38 of these political ads (including new ads with identical content) are active on Facebook. (Some of the ads we initially identified no longer appear in Facebook’s Ad Library, with an error message explaining that “this can happen when an ad expires or is deleted, or when it's incorrectly categorized as an ad about social issues, elections or politics.”) 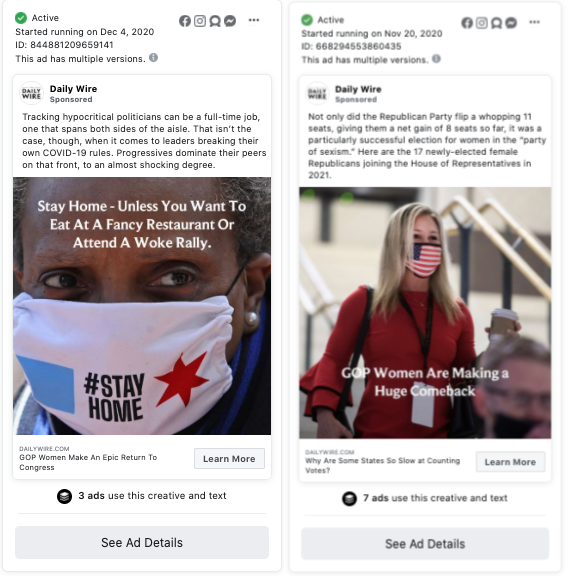 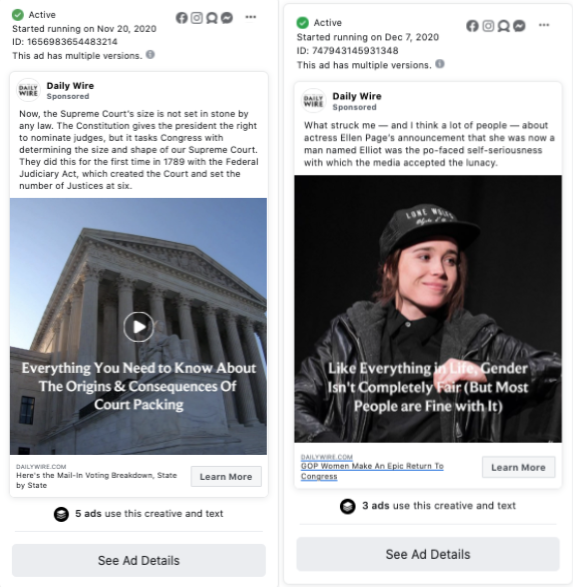 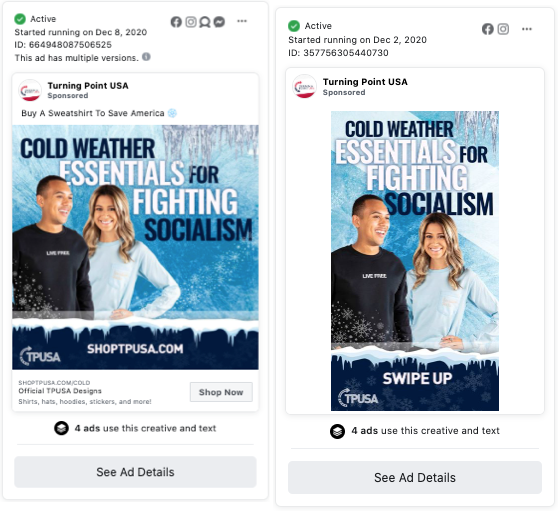 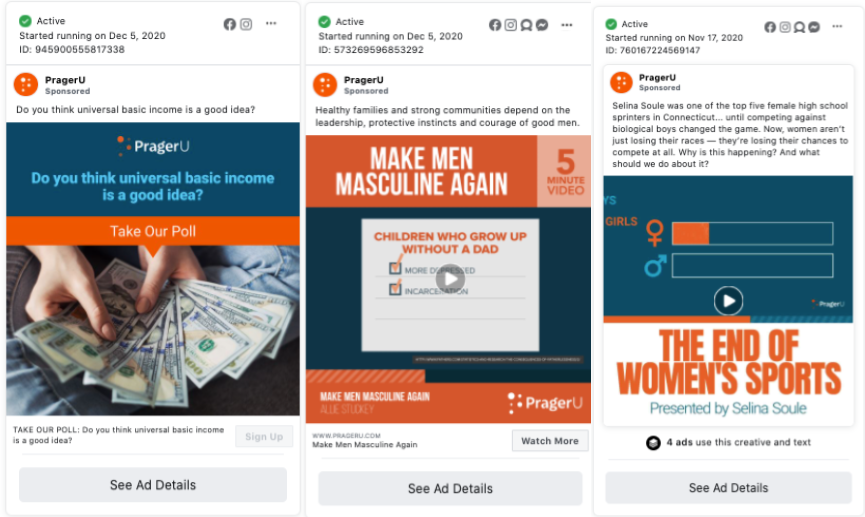 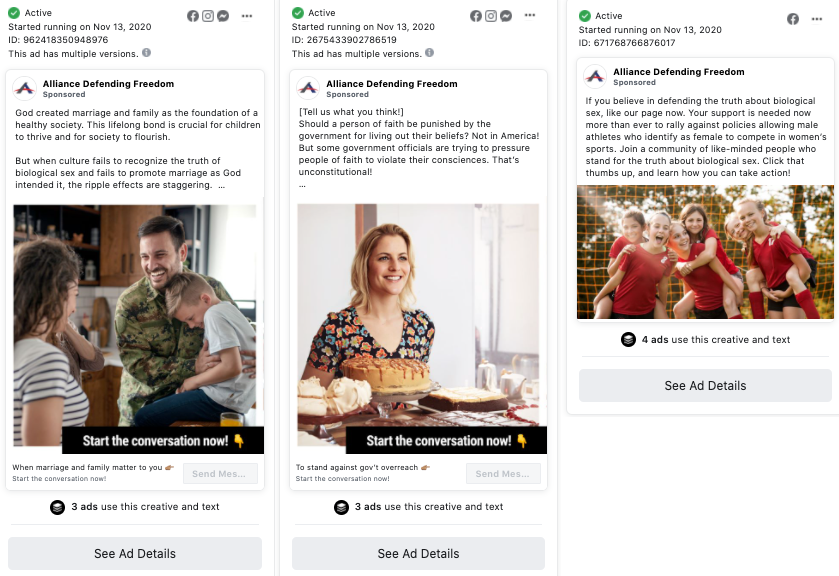 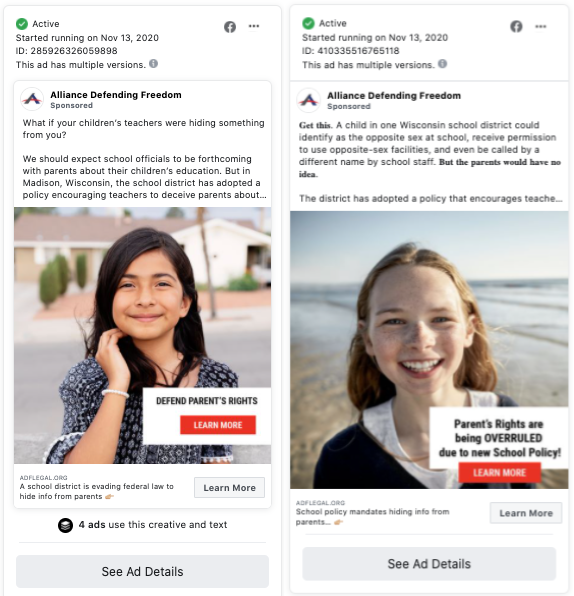