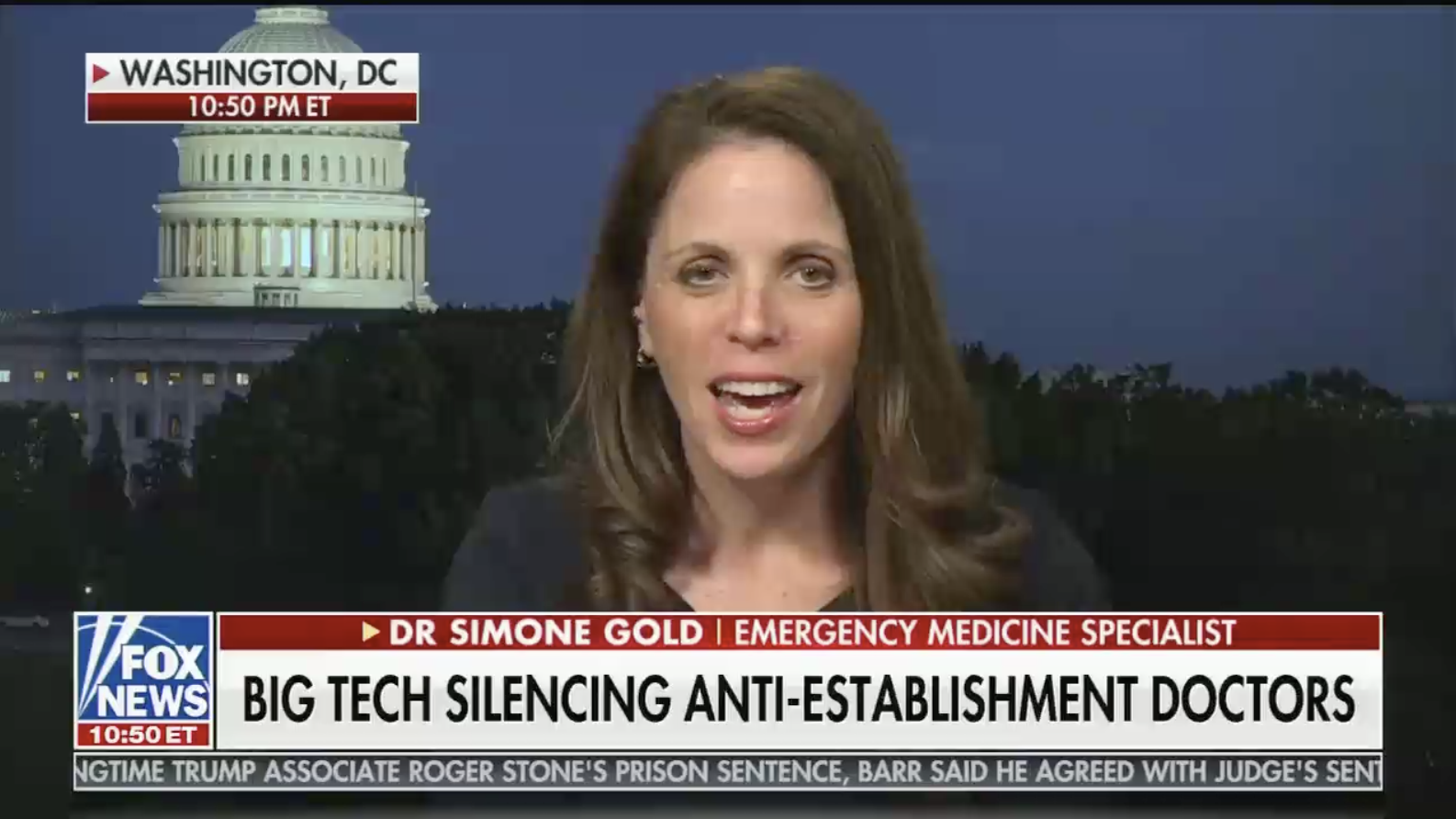 Dr. Simone Gold was among the pro-Trump mob that stormed the U.S. Capitol on January 6. But unlike many of her fellow rioters, Gold was there not just to undermine American democracy, but also to attack public faith in coronavirus vaccines.

According to an interview Gold recently gave to The Washington Post, she delivered a speech inside the Capitol similar to one she gave at a pro-Trump rally the day before, in which she referred to the vaccine as an “experimental, biological agent deceptively named a vaccine.” Her anti-vaccination comments at the Capitol riot were part of a monthslong effort by both Gold and the medical misinformation group she founded, America’s Frontline Doctors, to erode public confidence in pandemic response measures.

Gold, who has since been arrested for her participation in the Capitol riot, founded America’s Frontline Doctors in 2020. The group received national attention in July, when former President Donald Trump retweeted a video of a misinformation-laden press conference the group held that was organized by the Tea Party Patriots.

Members of America’s Frontline Doctors have publicly questioned the effectiveness of masks and social distancing measures, falsely promoted the antimalarial drug hydroxychloroquine as a cure for COVID-19, and urged Americans not to take newly approved vaccines. In each case, their comments have been circulated by right-wing media, attaching a veneer of medical credibility to dangerous, baseless objections to public health measures during a deadly pandemic.

Gold first received significant media attention in May when she authored a letter to Trump, cosigned by other physicians, calling for states to reopen as quickly as possible. At the time, Gold was affiliated with the Save Our Country Coalition, a network of conservative groups opposed to COVID-19 lockdowns. Fox News immediately latched on to Gold’s letter to press the case for rapid reopening, and Gold appeared on the program America’s Newsroom to discuss it.

After the letter was published, states that reopened quickly suffered spikes in coronavirus cases.

Other members of America’s Frontline Doctors also pushed for an end to certain social distancing measures, contradicting the advice of public health experts. In the infamous July video that was later retweeted by Trump, Dr. Dan Erickson pointed to Sweden’s looser virus restrictions as an example of a model the United States should emulate, falsely claiming that “lockdowns aren’t decreasing significantly the amount of deaths.”

For months, references to the Swedish model were popular on Fox News and throughout right-wing media. Yet Sweden’s initial response was widely considered to be a failure after the country “suffered a vastly higher death rate while failing to collect on the expected economic gains,” and the Swedish government later implemented stricter virus precautions.

Gold also questioned the use of masks to slow the spread of the virus, despite clear evidence that masks are an effective tool in the fight against COVID-19.

In what Gold claimed was initially a piece solicited by USA Today — before the publication supposedly decided not to publish her argument — she asserted that the “scientific usefulness of a mask has been so aggressively overstated” and that “most Americans already know that masking everyone is superstition.”

Another member of America’s Frontline Doctors, Dr. Stella Immanuel, made headlines following her appearance in the July video. During her portion of the press conference, Immanuel falsely claimed that hydroxychloroquine is a “cure” for coronavirus and denounced studies proving otherwise as “fake science.”

The day after Immanuel’s remarks, The Daily Beast uncovered bizarre comments she had made in the past about “alien DNA” and other medical conspiracy theories. Right-wing media, which had been relentlessly promoting hydroxychloroquine, immediately came to Immanuel’s defense. Hosts like Rush Limbaugh lashed out at criticism of Immanuel as designed to silence support for hydroxychloroquine, and other right-wing stars attacked tech companies for removing the video of the press conference from their platforms.

Gold has also been a vocal promoter of hydroxychloroquine. The day after the press conference, Laura Ingraham — one of the most prominent hydroxychloroquine boosters on Fox — hosted Gold for a segment on the drug. Gold argued, “The American people have been told that this is just something that they need to have a lot of fear and a lot of panic over, and it’s simply not true. There’s a cure, there’s treatment for early COVID disease and that’s hydroxychloroquine and zinc.”

Gold is now encouraging Americans not to get vaccinated

Most recently, Gold and other members of America’s Frontline Doctors have been promoting misinformation regarding coronavirus vaccines, despite evidence they are safe and effective.

During an appearance on Newsmax in December, Gold argued that young people should not receive the vaccine. Gold claimed, “The only reason a person should do this is if the benefit outweighs the risk. In the younger age groups, the benefit cannot outweigh the risk because the risk of death from COVID-19 in very young ages is exceedingly low.”

Another member of the group, Dr. James Todaro, appeared alongside Gold during the Newsmax segment. Todaro suggested that receiving the vaccine could be dangerous due to “antibody-dependent enhancement,” despite the fact that no evidence exists to support this theory.

At every stage of the COVID-19 response, Gold and America’s Frontline Doctors have sought to undermine the advice of public health experts, providing cover for right-wing outlets to spread misinformation and potentially helping to prolong the pandemic.