In a new interview, Meta global affairs president Nick Clegg indicated that Facebook might end former President Donald Trump’s suspension in January without considering the accuracy of his content. Trump’s recent activity on Truth Social, along with his social media behavior before and since his suspension, shows that Trump would just use Facebook to push misinformation and extreme rhetoric to the platform’s large user base.

On September 22, Clegg, who is in charge of content moderation policy for the company, told Semafor editor-at-large Steve Clemons that Facebook could allow Trump back on the platform in January, emphasizing that the “accuracy or sentiment about” his content was not a “driving factor” in the decision:

Former President Donald Trump could be allowed back on Facebook once a suspension of his account expires in 2023, Nick Clegg of parent company Meta Platforms, said Thursday at an exclusive Semafor Exchange event in Washington, DC.

For Meta, Clegg emphasized that the accuracy or sentiment about certain content was not the driving factor in whether Trump is allowed back on the platform.

“If we think there is is content on our platform which will lead to real-world harm — physical harm — then we feel we have a clear responsibility to act against it.” Clegg said at the Semafor event.

Following the January 6, 2021, attack on the United States Capitol, Facebook suspended Trump’s ability to post on Facebook and Instagram, publicly citing his use of Facebook “to incite violent insurrection against a democratically elected government.” Ultimately, Trump’s ban became an at least two-year suspension that could be lifted if Facebook decides “the risk to public safety has receded.” Clegg’s comments to Clemons suggest that the platform will likely lift the suspension in less than four months, ignoring Trump’s continued social media behavior and its real-world harm.

Allowing Trump back on Facebook, or any of the social media platforms that he has been suspended or banned from, would be a mistake, as his current behavior, along with his previous behavior, reveals just how he would misuse Facebook.

Trump’s behavior on his social media platform Truth Social since April is particularly telling. The platform has repeatedly failed to moderate content that threatens or incites violence and it has failed to moderate Trump’s hateful, misleading, and dangerous content. For instance, Trump amplified at least 12 different QAnon accounts a total of 18 times on August 30. In the last two weeks alone, Trump has posted on the platform at least 258 times, which mirrors his previous posting patterns on Facebook, Twitter, and his short-lived website, and includes attacking his political foes, pushing election misinformation, and promoting the QAnon conspiracy theory. 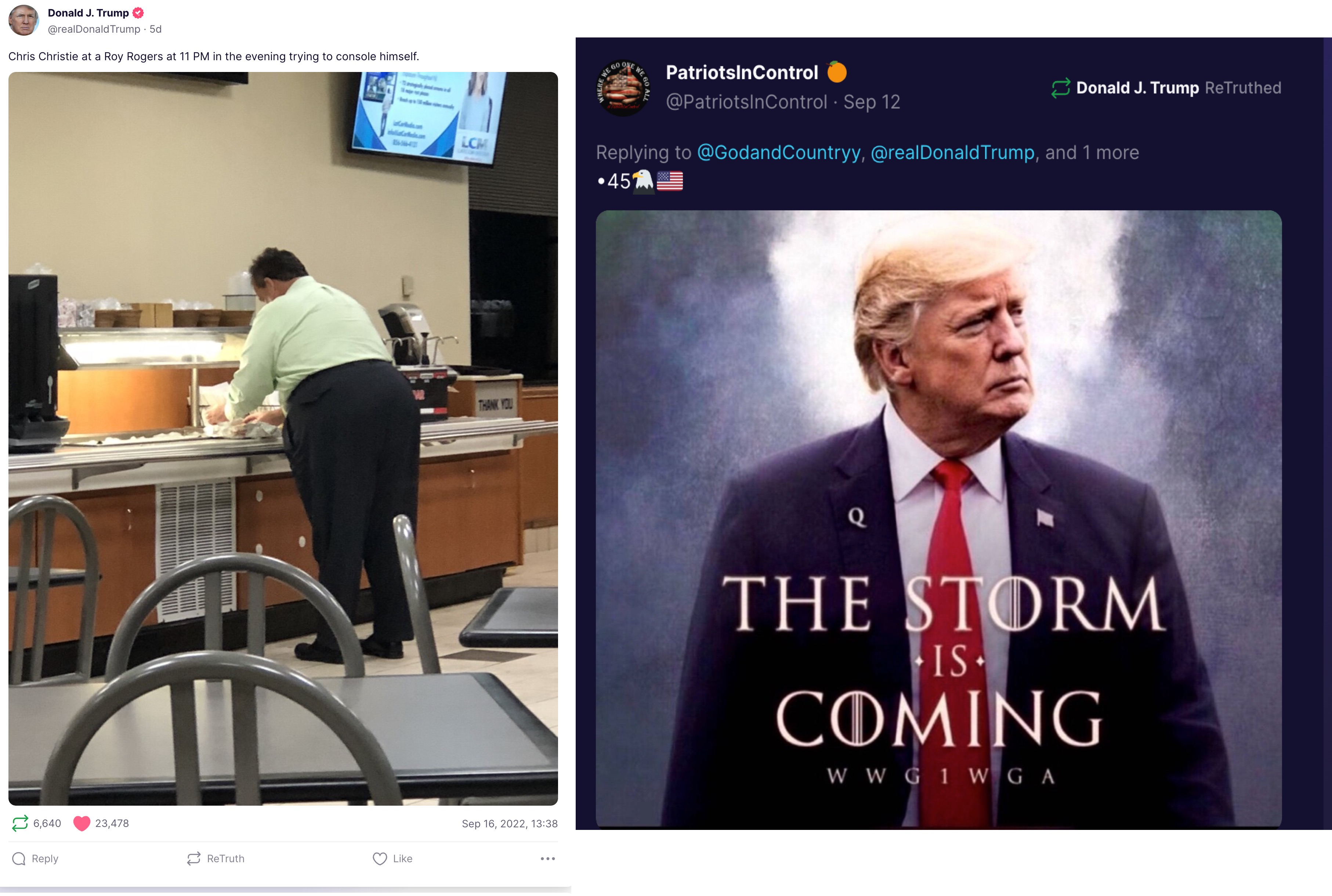 Before being suspended from Facebook and other social media platforms, Trump repeatedly pushed misinformation and hateful rhetoric. Media Matters has repeatedly reported on his previous social media behavior.

If Facebook allows Trump back on its platforms, it would allow him to push his misinformation and extreme rhetoric to a larger, more mainstream user base.