On February 1, Facebook removed a group with over 130,000 users that was behind one of the first efforts at organizing a U.S. truckers convoy against vaccine mandates, telling Fox News the group violated its policies against QAnon-related content. Media Matters has now found at least 37 groups related to U.S. truckers convoys, totaling over 670,000 members. Much like the original group that was removed by Facebook, many of these new groups also contain extremist content.

The most prominent of these efforts to plan a U.S. protest is “The People’s Convoy,” whose organizers started a slow-roll from California toward Washington, D.C. on February 23. American truckers on social media such as Brian Brase and Mike Landis are the primary organizers, along with Freedom Fighter Nation’s Maureen Steele and Leigh Dundas — a QAnon-affiliated insurrectionist. The convoy’s official Facebook group was created on January 30 and now has nearly 290,000 members. And while Brase and other organizers have appeared on Fox News and laughed off the suggestion that the group had any ties to militia members or the QAnon community, the convoy’s official Telegram channel has members with ties to QAnon, white nationalist groups, Three Percenters, and the Proud Boys. Additionally, known members of the Proud Boys were spotted at the convoy kickoff rally, while convoy organizers in Madison, Wisconsin, put out a call to the Oath Keepers to help with security.

“The People’s Convoy” is only one of dozens of Facebook groups trying to attract members after the platform removed the original group. In fact, at least 22 of the 37 Facebook groups that Media Matters identified were created after the original convoy group was shut down. Many of these other groups have successfully attracted tens of thousands of members. 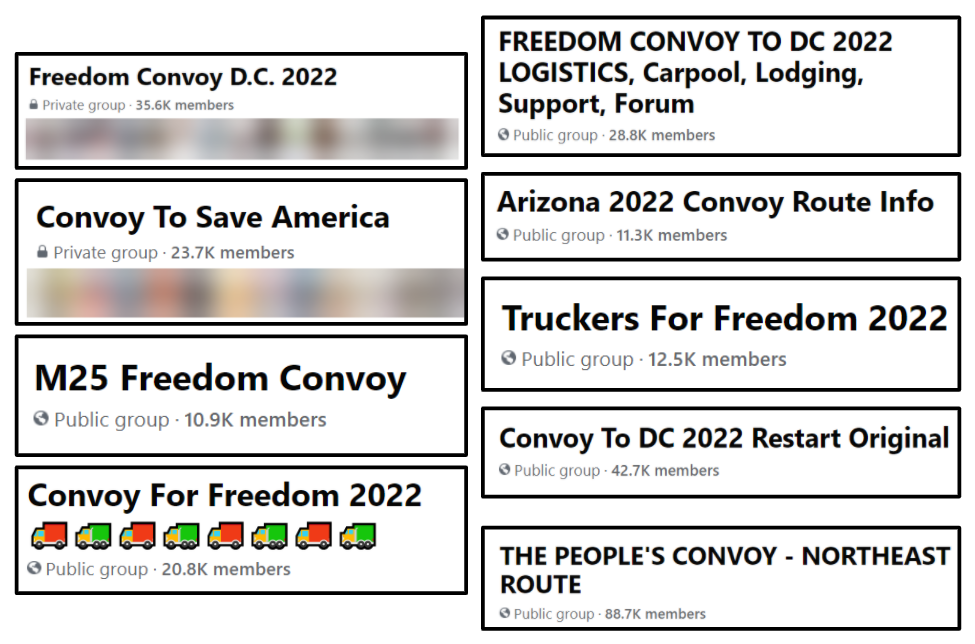 Removing one large group and letting similar groups proliferate is a tactic Facebook has used before with little success in curbing real-world harm. Leading up to the January 6 insurrection, Facebook removed only one large “Stop the Steal” group when it amassed thousands of members, but let other groups continue to grow, even as researchers and journalists warned of the potential for real-world harm.

Facebook’s response to the U.S. convoy now organizing on the platform is the same and its inaction could once again have serious consequences. Canada dealt with a similar convoy against vaccine mandates, and protesters blocked the country’s most vital trade route to the U.S. There were also numerous reports of property damage and other potential crimes related to the protests in its capital, Ottawa. In Alberta, police seized a cache of weapons and arrested 11 people involved in the protests, four of whom were charged with conspiring to murder Royal Canadian Mounted Police officers. 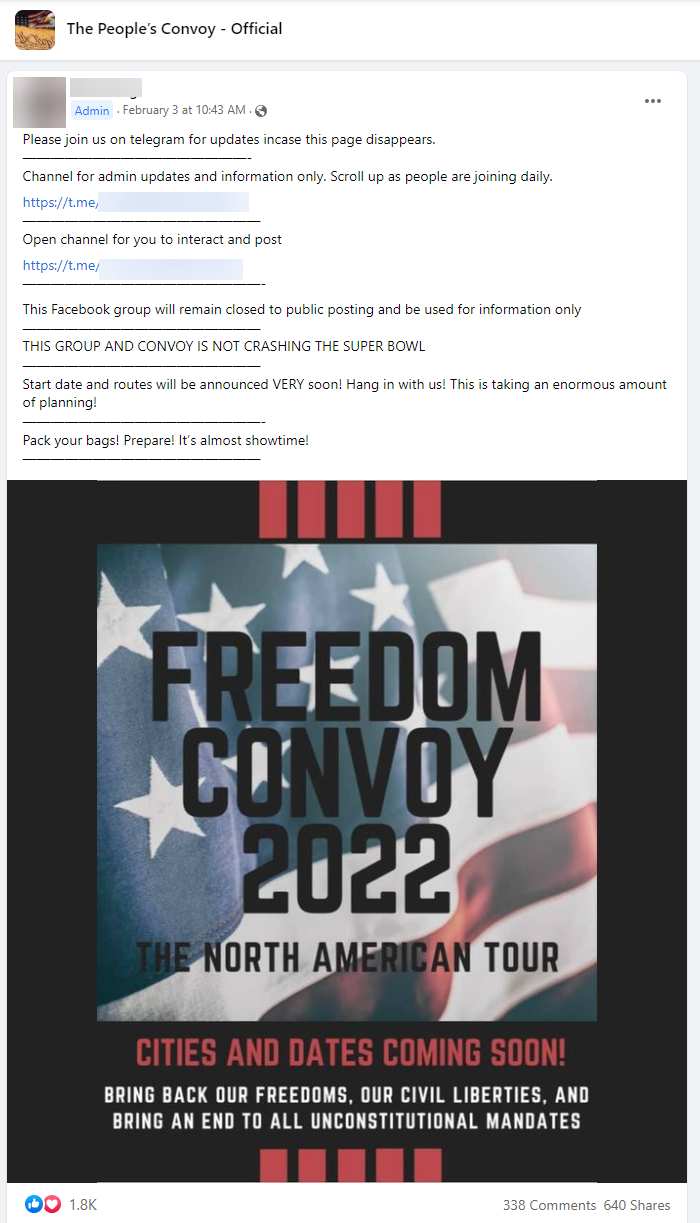 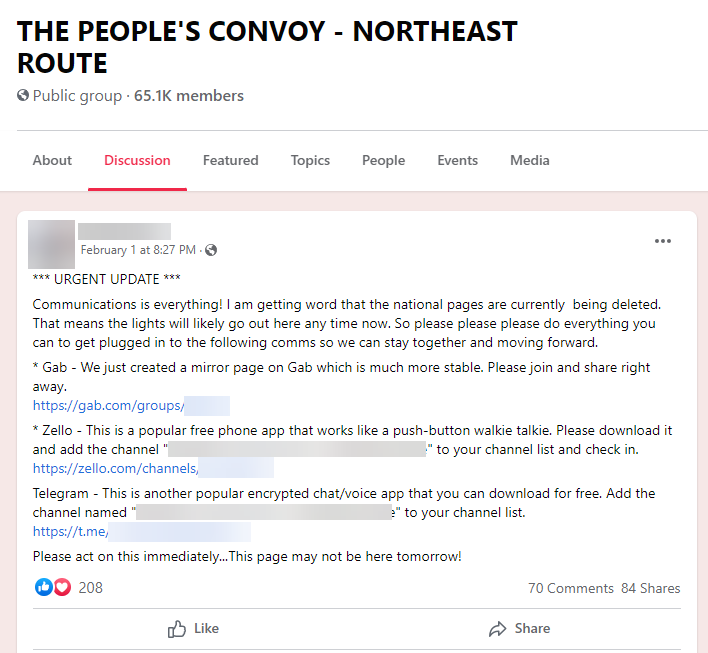 Some of these Facebook groups also contain posts celebrating the Canadian protests alongside slogans and other references to the QAnon conspiracy theory. In fact, Truckers For Freedom 2022 — a group that had over 50,000 members — had posts referring to the conspiracy for at least three weeks before Facebook finally removed the group between February 22 and 23. 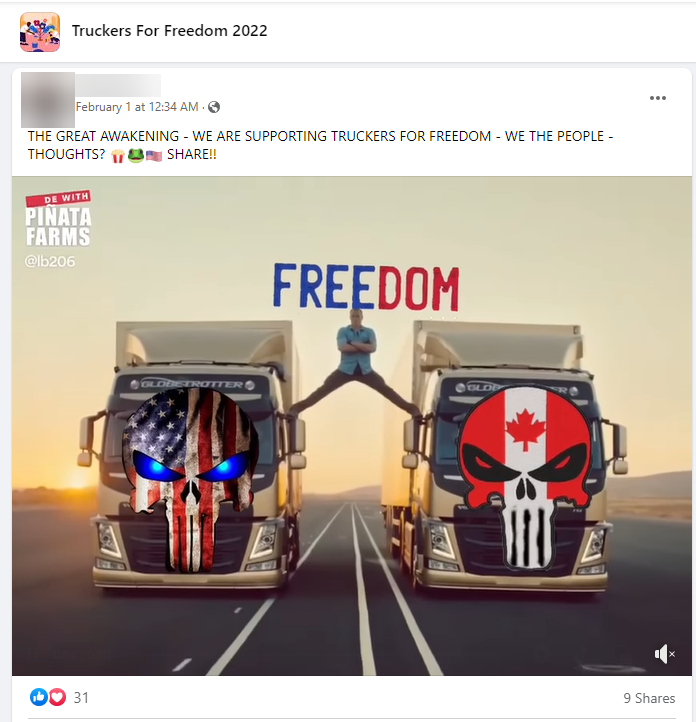 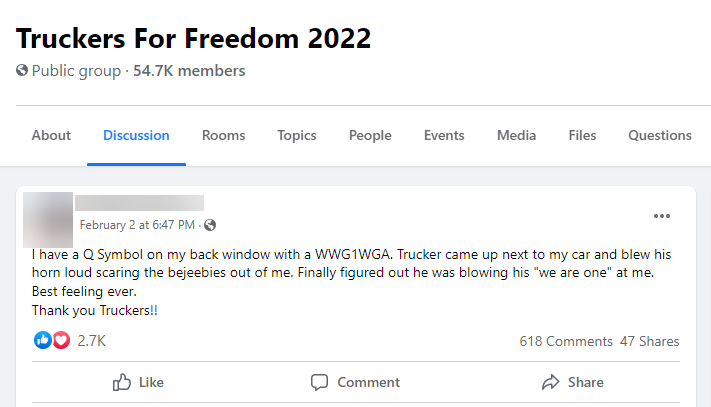 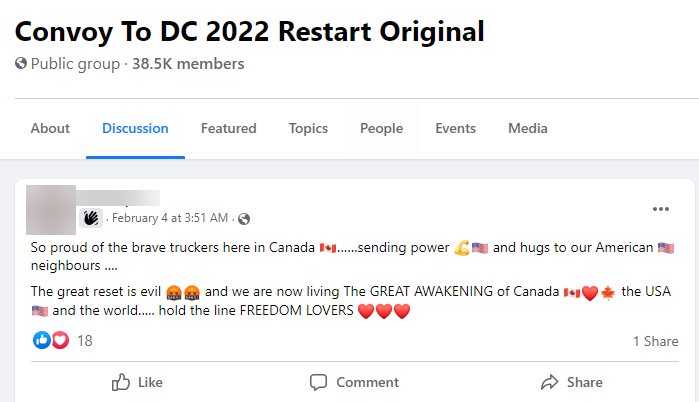 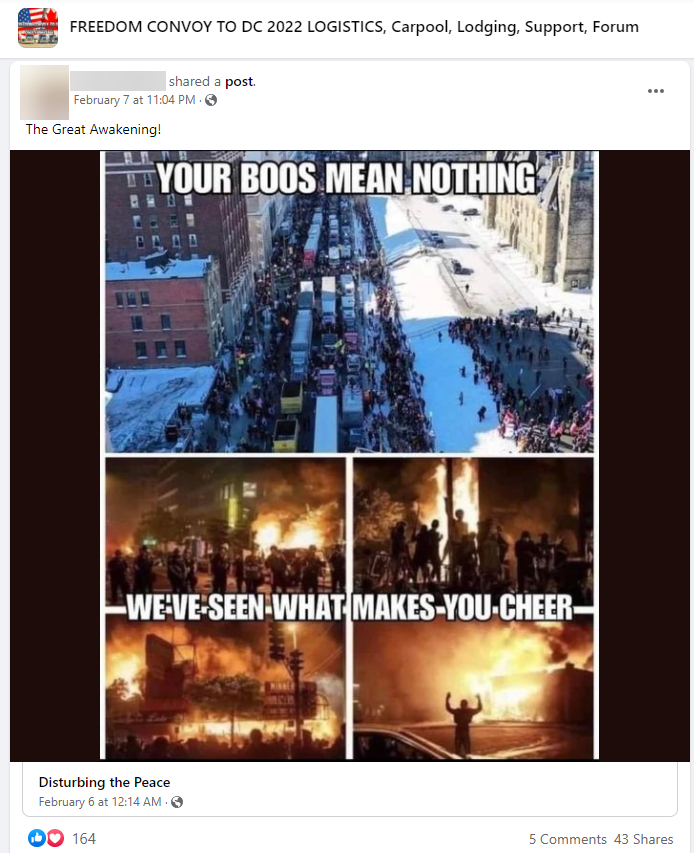