A new Media Matters analysis has found that Fox Nation -- the streaming service for Fox News “superfans” -- has run at least 56 ads since January 27 promoting the episode, which relies on antisemitic tropes and conspiracy theories to attack George Soros, the Hungarian-born billionaire philanthropist and Holocaust survivor. The ad data is not available through the Facebook Ad Library because Fox Nation isn’t running these promotions as political ads, which is the only type Facebook’s Ad Library archives or provides data for. However, external data from Pathmatics reveals that Fox Nation spent more than $48,000 on the ads, earning more than 5.2 million impressions.

Hungary vs. Soros is the latest installment in the “Tucker Carlson Originals” series, which has a shameful record of using shock and awe tactics to push antidemocratic propaganda. Despite Tucker Carlson’s white nationalist brand, the streaming service has heavily relied on the prime-time host to promote and grow the platform.

The “documentary” calls upon antisemitic stereotypes to demonize Soros and puff up the far-right nationalist government of Hungarian Prime Minister Viktor Orbán, who has embraced authoritarian tactics and faces reelection in April. Carlson simultaneously pushes many of the same talking points about Soros that Orbán used in his 2018 election campaign. As my Media Matters colleague Nikki McCann Ramirez noted, Carlson portrays Soros in the series “as an insidious, unseen political kingmaker who seeks to destroy the national sovereignty of Hungary and transform its culture by leveraging his money and control of the media" against a backdrop of menacing synth chords and black and white images of Soros.

Facebook is allowing Fox Nation to run ads promoting Hungary vs. Soros despite its authoritarian and antisemitic undertones. In fact, Fox Nation has run at least 56 ads related to the episode, with at least 44 still active at the time of publication. (The other 12 ads are no longer shown in Facebook’s ad library.)

The ads, which have been seen millions of times by Facebook users, include one of four texts that attack Soros for “unchecked political power” and/or praise Orbán for being Soros’ “newest foe.” Additionally, all the ads link to Fox Nation’s website, where users can subscribe to watch it. 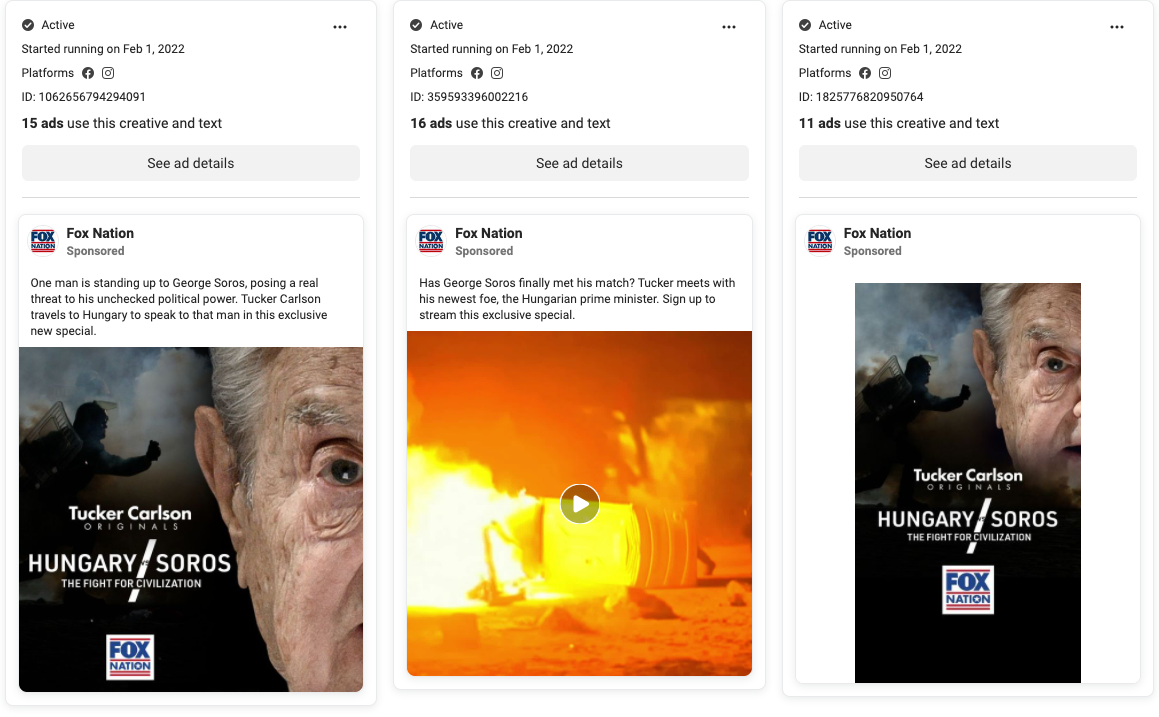 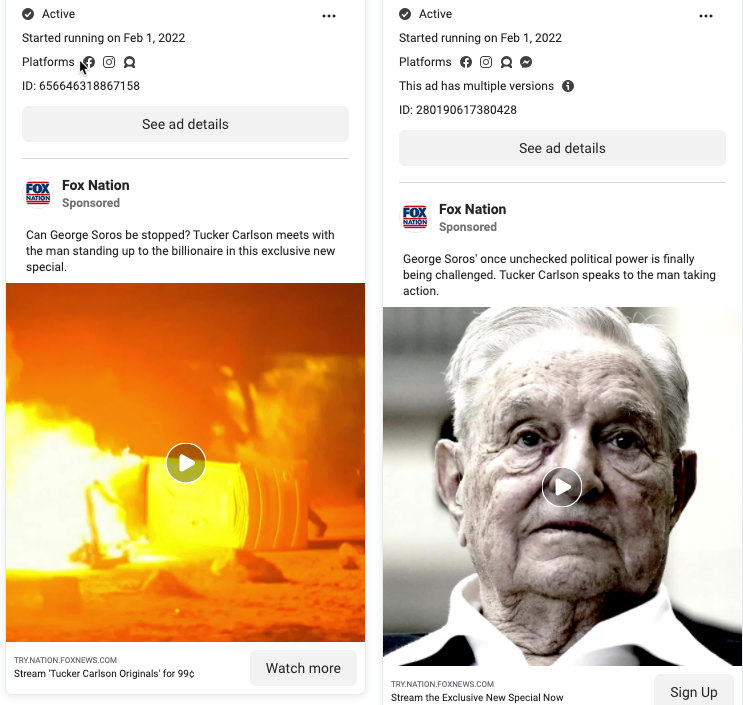 Some of the ads also include a promotional 15-second video of the episode.

It was also repeatedly promoted on Fox News itself, not only on Carlson’s show, but also during his interviews on The Five and Fox & Friends. The Fox News website featured an ad for it on its homepage and published an article on the piece. Fox Nation also sent out a promotional email that said, “George Soros is waging cultural and political warfare on the West, but he’s met his match in Hungarian Prime Minister Viktor Orbán.”

The right-wing fixation on Soros is a problem across the Fox brand. According to a transcript analysis from Kinetiq video database, Fox News mentioned “Soros” a total of 435 times between January 1, 2021, and February 8, 2022, with the coverage ramping up starting in November. With Facebook’s long history of profiting from the spread of harmful content, it is unsurprising that the platform is enabling the promotion of this production to millions.