Right-wing media outlets are criticizing the Washington attorney general for enforcing non-discrimination laws against a florist who refused to offer her services for a same-sex wedding.

Washington State Attorney General Bob Ferguson filed a lawsuit on April 9 against Arlene's Flowers and Gifts, a florist that refused to supply flowers for the wedding of a same-sex couple due to her religious beliefs. According to the lawsuit, the florist violated the state's Consumer Protection Act, which prohibits businesses from discriminating against customers on the basis of sexual orientation.

Right-wing media outlets have jumped on the story, touting it as evidence of the gay community's hostility towards religious freedom. 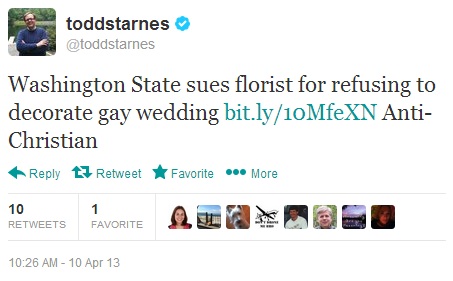 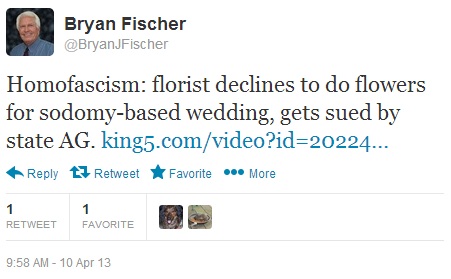 There is no question that rank-and-file gay couples of all political stripes are sincere in their desire to enjoy the benefits and status that come with marriage. There is no sinister agenda at work in the issue of same-sex marriage among the masses. But the same cannot be said of the organized left who have always intended to use the issue of gay marriage as a vehicle to destroy the Christian Church and marginalize Christians.

Faithfulness to the Bible and the Christian faith will very soon be declared bigotry by the media and a de facto civil rights violation by the State. [emphasis added]

Of course, leading up to last November's election, when Washington State voted to legalize same-sex “marriage,” supporters argued that redefining marriage wouldn't hurt anyone--that it was just about two people who love each other. Well, it may be about two people who love each other, but it's also about the florists, the bakers, the candlestick makers, and everyone else the Left wants to force to endorse their relationship!

The most telling reaction to the lawsuit, however, came from Joseph Backholm, head of the Family Policy Institute of Washington:

One wonders how many of those who assured us that no one would lose their liberty will come to the defense of Arlene's Flowers.

Of course this lawsuit isn't due exclusively to the redefinition of marriage.  The non-discrimination statute that this suit has been brought under existed previously.  It was bad then, it is bad now.  The difference, however, is this.  Now that the law says marriage is genderless, those who think otherwise are much more likely to be confronted with the Hobbesian choice to conform or be punished. [emphasis added]

Backholm is right in pointing out that the lawsuit “isn't due exclusively” to Washington's marriage equality law. In fact, it has nothing to do with the law. Same-sex couples are allowed to have same-sex wedding ceremonies - which are functionally just private celebrations - even if the state they're in doesn't legally recognize their relationships as “marriages.” In other words, refusing to provide flowers for a same-sex couple's wedding ceremony is an illegal act of discrimination regardless of whether Washington had decided to legalize same-sex marriages.

As Backholm admits, his real problem is with the state's Consumer Protection Act because it prohibits business owners from discriminating against LGBT people.

When right-wing figures fearmonger about marriage equality's alleged assault on religious freedom, what they're usually talking about is their own reluctance to abide by basic non-discrimination measures put in place to protect LGBT people, regardless of whether that discrimination stems from sincerely held private religious beliefs.