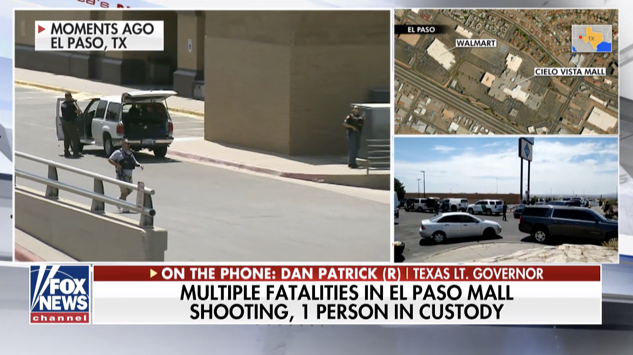 On August 3, a man armed with an assault weapon opened fire at a Walmart in El Paso, TX, killing 20 people and leaving 26 other people injured. Shortly before opening fire, the gunman reportedly posted a manifesto to far-right message board 8chan in which he expressed hatred for Latino immigrants and complained of the “Hispanic invasion of Texas.” According to ABC News, the gunman told law enforcement after being taken into custody that “he wanted to shoot as many Mexicans as possible.”

But in the wake of the shooting, both Patrick and Jones pivoted to the boogeyman of “antifa” to distract from the obvious fact that the gunman was inspired by right-wing rhetoric about Latinos and immigration.

Even while media reports on the mass shooting remained hazy, Patrick called into Fox News on August 3 and said, “You know, I was looking at a story recently…where Antifa is posting, you know they want to come down to El Paso and do a 10-day siege. Clear message to Antifa: Stay out of El Paso.” Andy Ngo, an editor of right-wing website Quillette, has recently drawn attention to the upcoming anti-fascism protests, which call for the abolishment of the U.S. Immigration and Customs Enforcement agency.

Jones, who is based out of Austin, TX, pushed similar claims in a video posted to his Infowars website on August 4. After suggesting that the El Paso mass shooting was possibly a false flag attack carried out by leftists -- typical fare for Jones in the wake of violent tragedies -- the Infowars host suggested the shooting may have been staged to help the anti-fascism protests:

During his August 4 video, Jones claimed to denounce racism against Latinos, but he has made similar claims to the ones found in the El Paso gunman’s reported manifesto. In January 2018, Jones went on a rant in which he declared that Latinos are stealing the “birthright” of Americans as part of “the globalist plan” to “turn Hispanics into anti-American racists and then break the country up” -- the same “great replacement” white nationalist conspiracy theory seen throughout the 8chan manifesto.