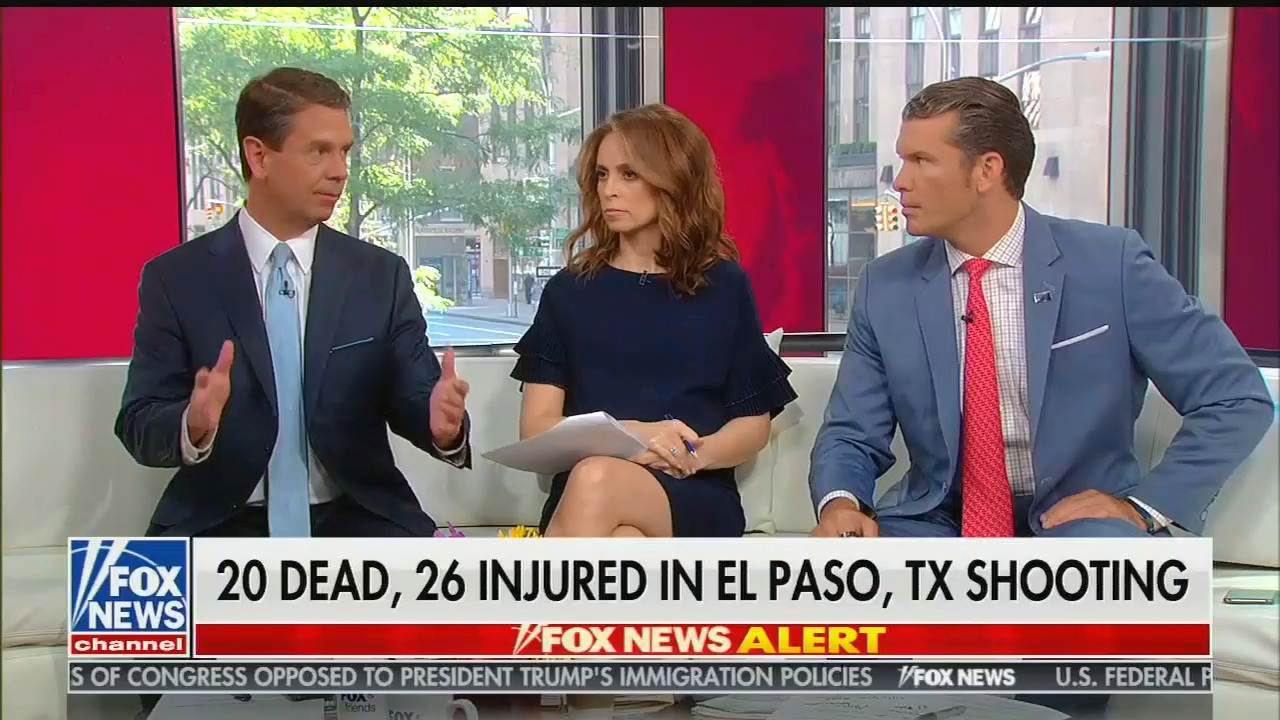 This weekend, there were two more mass shootings, in El Paso, TX, and Dayton, OH. As I write this, reports say that at least 20 people were murdered in El Paso, and nine were killed in Dayton. This follows the mass shootings last weekend in Gilroy, CA, and Brooklyn, NY.

8chan is a far-right message board where shooters like this are portrayed as heroes; both the New Zealand shooter and the Poway Synagogue shooter both posted there. The Gilroy shooter recommended on Instagram a book that is popular among white supremacists on 8chan. Sharing his assessment on air, Collins was blunt: 8chan has a “body count.”

The El Paso shooter’s alleged manifesto is built around the “great replacement” theory -- the white supremacist conspiracy theory that immigrants are being brought into the United States to replace white people. That should sound familiar: It's a regular part of Fox News prime time. It is specifically one of the things that Laura Ingraham and Tucker Carlson have been criticized for pushing.

I spent a lot of time watching Fox News’ Saturday coverage of the El Paso shooting, and it was striking how the coverage bent toward propaganda. There were numerous interviews with survivors and witnesses that could have been done by any news outlet. But in between those interviews, Fox went out of its way to avoid any conversations about easy access to guns and the rash of far-right white nationalist shooters.

The network repeatedly speculated about a link between video games and the El Paso shooting.

On Sunday morning, Republicans Lt. Gov. of Texas Dan Patrick and House minority leader Kevin McCarthy (R-CA) both talked to Fox News about the dangers of video games as well. NBC's Ben Collins pointed out in return that “Nowhere did this shooter mention video games. The screed shows he had an encyclopedic knowledge of real-life guns, posted to a community of white nationalists, and wrote about doing this as part of a cause against immigration.”

Fox News also speculated about a link to ISIS, given the proximity to the “very porous” U.S.-Mexico border (the implicit and evidence-free theory being that an ISIS terrorist came over the border).

A Fox guest even suggested that this type of mass shooting is why the American military is performing “counter-terrorism work” around the globe.

But, of course, Fox also said that now was not the time to talk about gun violence as a systemic problem.

Patrick instead appeared on Fox & Friends, where he used the El Paso shooting to call for federal government intervention into the video game industry, more prayer in schools, and more saluting of the flag. Patrick has appeared on Fox previously to push the great replacement theory.