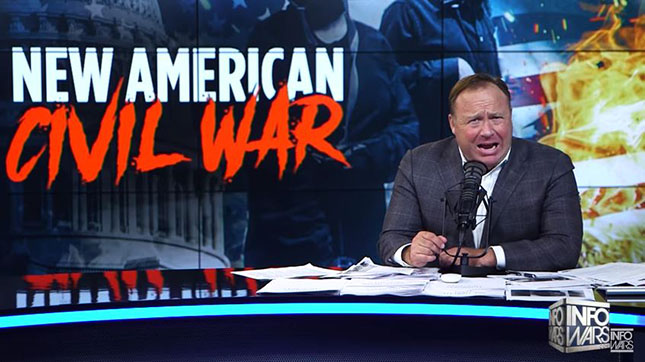 Hours after the worst mass shooting in modern U.S. history, America’s most famous conspiracy theorist, Alex Jones, took to the airwaves to name the culprit as a “leftist” who was “angry about Trump” before connecting the shooting to the 100-year anniversary of the Bolshevik Revolution -- and Jones was just getting started.

No credible reporting had said anything of the sort. But the falsehoods from Jones kept flowing as he spun increasingly convoluted and wide-ranging conspiracy theories out of his initial claims. In the three days following the shooting, Jones would make wild claims about the gunman, Stephen Paddock, including alternately claiming that Paddock was a left-wing extremist and that the mass killer was actually innocent, the victim of a setup. And he was reckless in ascribing blame, claiming the shooting was ordered by various groups including the Democratic Party.

To give his irresponsible -- and often contradictory -- conspiracy theories a sheen of credibility for his audience, Jones often cited anonymous, supposedly highly-placed sources in law enforcement, the military, and the government.

For years, Jones has concocted conspiracy theories following tragedy. Other shootings he has claimed were false flags or hoaxes include the Sandy Hook Elementary School massacre, the Aurora, CO, movie theater mass shooting, the Columbine High School attack, and the Pulse nightclub shooting. The narrative is always politically expedient for Jones: When Democrats are in power, the government often stages the attacks, and when they are not, outside leftist forces are usually responsible.

There are real-world consequences to Jones’ conspiracy theories. The man who opened fire in December inside a Washington, D.C., restaurant that Jones’ website Infowars had claimed was involved in a child trafficking ring appears to have watched Infowars material in the days leading up to the shooting, according to court documents.

Families of Sandy Hook victims have said that Jones has spurred harassment against them, with angry callers telling parents their children didn’t actually die. Jones’ Las Vegas comments are primed to cause a similar phenomenon. Significantly, Jones is pushing conspiracy theories surrounding people with no involvement in the shooting, including the gunman’s brother and the owner of the Mandalay Bay Resort, the site from which the gunman carried out his attack.

Also significant is the fact that Jones apparently has the ability to get his information on the desk of President Donald Trump. The two men have a warm relationship, with Trump appearing on Jones’ show in December 2015 to praise Jones’ “amazing” reputation. Since then, Jones has claimed to be in regular communication with Trump and his inner circle. In one recent example of Jones’ influence, racist former Maricopa County sheriff Joe Arpaio credited Jones with bringing his case to Trump’s attention, ultimately leading Trump to issue Arpaio a pardon.

Below are Jones’ myriad conspiracy theories about the Las Vegas attack, made on The Alex Jones Show between October 2, the day following the shooting, and October 4:

Jones has offered numerous contradictory claims about the gunman’s background, including that Paddock was a left-wing extremist who attended anti-Trump rallies, a patsy, “an Islamist,” and a spy who “got set up and double crossed.” Jones also claimed that there were multiple gunmen and in one scenario suggested that Paddock was “a patsy taken up there and killed,” allowing the real perpetrators to escape:

While authorities have not determined Paddock’s motive, Jones has made a laundry list of claims of who supposedly directed or was connected to the attack. People and groups he named include ISIS, supporters of the Bolshevik Revolution, “deep state Democrats,” former Vice President Al Gore, former high-level CIA officials, “the shadow government,” antifa, globalists, the Democratic Party, the owners of the Mandalay Bay Resort, and supporters of restrictions on guns:

Beginning on October 4, Jones began promoting conspiracy theories about media interviews given by Paddock’s brother Eric. While playing footage from interviews Jones said, “This guy is the worst actor,” and that he “is central casting, the squirrelist person I’ve ever seen.” Although not apparent on the video, Jones claimed that Paddock was wearing an “earpiece” and “they’re talking in it, you can see it’s happening, … and he’s just parroting talking points,” before saying, “This is a total cover-up.”