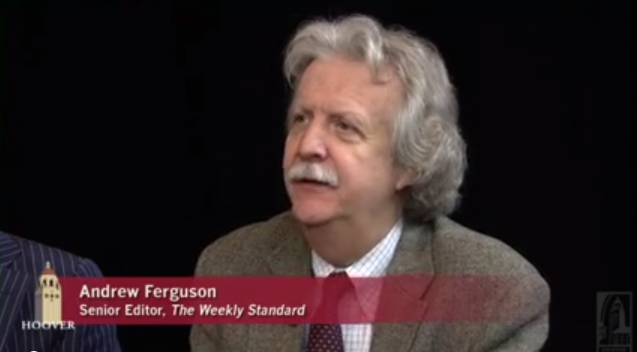 The Weekly Standard touted Stephen Jimenez's book arguing that Matthew Shepard's 1998 murder wasn't an anti-gay hate crime but the result of a meth deal gone awry -- ignoring overwhelming evidence of his killer's homophobic motives and denunciations of the book from investigators and lawyers involved in the case.

In the November 18 edition of The Weekly Standard, Andrew Ferguson lauded Jimenez's The Book of Matt: Hidden Truths about the Murder of Matthew Shepard. Playing into Jimenez's inflated self-image as a fearless reporter whose commitment to revealing the truth proved consistently “dangerous,” Ferguson began the review by marveling that it's a wonder Jimenez “hasn't been burned in effigy, yet, or heckled mercilessly, yet, or denounced, at least by anybody that really matters, as a traitor to the cause. Yet.” This sets the stage for a review devoted more to singing Jimenez's praises than to critically evaluating the arguments put forth in The Book of Matt.

More surprisingly, Jimenez concludes that Shepard's death had nothing to do with homophobia. It was instead the horrific result of a drug deal gone wrong. Indeed, in The Book of Matt, Jimenez offers lots of circumstantial evidence that Shepard and one of his murderers, a violent and drug-addled bit of tumbleweed called Aaron McKinney, were rival dealers in crystal meth. Several named witnesses told Jimenez that the two even had a sexual relationship.

For the most part the conservative press was undeterred by the fact that The Book of Matt, as impressive as it is for the author's tirelessness and courage, is something of a mess. When it comes to gay true-crime investigator-writers, Jimenez is no Truman Capote. He has chosen to tell the story of Shepard's life and death through a first-person account of his own investigations. It is thus not so much a book that tells a story as a book that tells a story about telling a story, a bit like the famous totalitarian mural titled “The Struggle of the Little People to Finish the Mural.” This technique plays hell with the chronology, and it's often difficult for the reader to tell which character said what when. The reader's unease is compounded knowing that many of Jimenez's sources are the kind of witnesses usually considered unreliable: meth heads, hustlers, hookers, drunks, various species of trailer trash.

In his defense Jimenez says that if his witnesses seem unreliable, it is only because this is the sort of people Shepard and his murderers associated with. They knew the participants firsthand -- and these are the same witnesses that authorities relied on to get a conviction. For each of his more striking claims Jimenez has been careful to gather multiple sources, usually named. No alert reader can come away from the book still believing the approved story of a shy young man robbed of his life because of his assailants' “fear of the other.” The myth that thrilled the progressive heart for 15 years cannot survive Jimenez's accumulation of evidence.

So Ferguson acknowledges that Jimenez's sources are generally “unreliable,” but based on Jimenez's assurance that these people were indeed Shepard's associates, he thinks it's safe to conclude that "[t]he myth that thrilled the progressive heart for 15 years" has been thoroughly demolished.

Perhaps “Jimenez's accumulation of evidence” cast doubt on whether Shepard's “assailants' 'fear of the other'” inspired his murder, but Ferguson doesn't bother to question whether Jimenez's is a selective accumulation of evidence. To the extent that Jimenez acknowledges principal assailant Aaron McKinney's use of homophobic language -- in his confession statement, McKinney referred to Shepard as “the fag” and “the queer” -- Jimenez writes it off as a reflection of McKinney's affinity for gangsta rap.

Meanwhile, Jimenez chooses not to grapple with other inconvenient facts -- that years after the murder, McKinney defiantly declared “Matt Shepard needed killing” because he was “obviously gay,” or that in a prison letter, McKinney described himself as “homofobick [sic].” While McKinney's stories about what happened the night of the murder have shifted multiple times over the years, he has consistently maintained one thing -- that he didn't know Shepard prior to the attack.

Ferguson also fails to note that figures involved in the investigative and legal aspects of the Shepard murder have condemned the book. Former Laramie police commander David O'Malley savaged the book as “conspiracy theory BS” and “full of lies.” Detective Rob DeBree said that investigators exhaustively probed the drug angle to the murder, but found no evidence that meth fueled the attack. Most damningly, Tim Newcomb, the appellate attorney for assailant Russell Henderson, released a statement indicating that one of the sources for Jimenez's book -- a purported ex-lover of Shepard's -- had contacted Newcomb during the appellate process and claimed to have Shepard's diary. After growing increasingly evasive, the man implied that he was in search of money, Newcomb said.

If Ferguson wishes to acquit The Book of Matt, he needs to wrestle with these facts. It's telling that neither he nor other Jimenez champions have attempted to do so. Of course, the right-wing media outlets heralding the book have no interest in this; their mission isn't really to get to the bottom of Shepard's murder, but to assail LGBT protections, including the federal hate crimes law named for Shepard.

Ferguson assures readers he has no use for such opportunists -- and then proceeds to gloat that The Book of Matt undermines “the progressive understanding of contemporary America.” In a case study of condescension and concern-trolling, Ferguson celebrates the book as a sign that the LGBT movement may be “outgrowing its own mythology” and has ultimately “carried the day.” If LGBT activists indeed carry the day, it will be despite the protests of writers like Ferguson, who warned as recently as April that marriage equality would "devalu[e]" heterosexual marriages. But don't even think to accuse him of political motives in praising The Book of Matt.