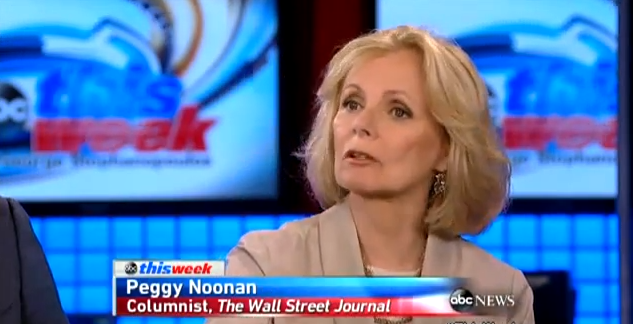 Wall Street Journal columnist Peggy Noonan pointed to the fight against measures that would allow businesses to discriminate against gay and lesbian customers as further evidence of “the politicization of everything,” ignoring the fact that conservative media and legislators spearheaded the push to allow individuals and businesses to deny services to the LGBT community.

In a February 27 screed lamenting the decline of “the nation's morale,” Noonan launched a wide-ranging attack on “the aggressive left” and its alleged responsibility for sowing the seeds of “national division.” Obamacare, the IRS, the EPA, the NSA, and Nancy Pelosi all featured in Noonan's list of terribles, as did Senate Majority Leader Harry Reid (D-NV), whom she compared to Vladimir Lenin because Obamacare. Noonan also expressed concern about “the eroding end of the idea that religious scruples and beliefs have a high place” (emphasis added):

We are suffering in great part from the politicization of everything and the spread of government not in a useful way but a destructive one. Everyone wants to help the poor, the old and the sick; the safety net exists because we want it. But voters and taxpayers feel bullied, burdened and jerked around, which again is not new but feels more intense every day. Common sense and native wit tell them America is losing the most vital part of itself in the continuing shift of power from private to public. Rules, regulations, many of them stupid, from all the agencies--local, state, federal--on the building of a house, or the starting of a business. You can only employ so many before the new insurance rules kick in so don't employ too many, don't take a chance! Which means: Don't grow. It takes the utmost commitment to start a school or improve an existing one because you'll come up against the unions, which own the politicians.

It's all part of the malaise, the sclerosis. So is the eroding end of the idea that religious scruples and beliefs have a high place that must culturally and politically be respected. The political-media complex is bravely coming down on florists with unfashionable views. On twitter Thursday the freedom-fighter who tweets as @FriedrichHayek asked: “Can the government compel a Jewish baker to deliver a wedding cake on a Saturday? If not why not.” Why not indeed. Because the truly tolerant give each other a little space? On an optimistic note, the Little Sisters of the Poor haven't been put out of business and patiently await their day in court.

While Noonan lamented the implications of a world in which being LGBT isn't sufficient reason for a business owner to deny someone a service, her survey of the “politicization of everything” excluded a look at the role of conservative media outlets like Fox News in crafting the narrative that LGBT equality poses a dire threat to religious freedom - the very narrative that led legislators across the country to begin proposing bills that would make LGBT customers legitimate targets of discrimination.