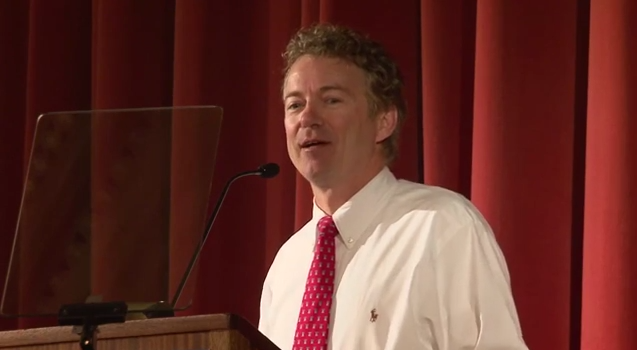 As Sen. Rand Paul (R-KY) woos young voters ahead of an expected 2016 presidential bid, it's become conventional wisdom among many Beltway pundits that Paul could broaden the GOP's appeal with his ostensibly tolerant views on social issues - never mind that that this narrative is completely divorced from Paul's traditional conservative positions on such topics.

Paul's effort to win over Millennials and other constituencies historically suspicious of the GOP came to the fore with his March 19 speech at the University of California, Berkeley, where Paul condemned government surveillance programs as a threat to privacy.

The chattering class proclaimed that the speech was emblematic of Paul's appeal as an unconventional, “intriguing” Republican. And despite Paul's conservative stances on issues like marriage equality, reproductive choice, and creationism, many media outlets have also pointed to Paul as the kind of candidate who could help move the GOP away from its hardline social positions. It's a narrative that even some of Paul's conservative critics have come to accept, as Charles Krauthammer showed when he called Paul “very much a liberal on social issues.”

A look at media coverage of Paul helps explain where Krauthammer got that notion.

Except the GOP long ago arrived at Paul's position on marriage equality - unequivocal opposition. To be sure, Paul opposes a federal marriage amendment and has urged the GOP, for strategic reasons, not to emphasize social issues. But he remains a steadfast supporter of state marriage equality bans, recently condemning as "illegitimate" a Kentucky court ruling against the state's marriage ban  and reaffirming “the historic and religious definition of marriage.”

As for RealClearPolitics' statement that Paul “largely” agrees with his father on social issues - there's no “largely” about it. According to his chief of staff, Paul opposes abortion in all instances except “to save the life of the mother.” While Paul's office skirts the question of whether he supports exceptions for rape or incest, he's on the record opposing such exceptions. And Paul doesn't just oppose marriage equality. He has taken to anti-gay extremist Bryan Fischer's radio show to discuss the topic, and in remarks he later said were a joke, Paul has compared same-sex marriage with polygamy and bestiality.

On other hot-button issues, Paul's rhetoric dovetails with that of other conservatives. Under the Obama administration, Paul charges, U.S. taxpayers are funding an international “war on Christianity.” Speaking before the Christian Homeschool Educators of Kentucky in 2010, Paul appealed to young-earth creationists, refusing to say how old he believes the earth is.

The media's facts-be-damned references to Paul's supposed unorthodoxy on social issues is symptomatic of a larger failure of political journalism. Mentions of his purported social libertarianism almost uniformly come in the context of speculation on the 2016 horse race - how Paul can position himself as an electable candidate, how he could puncture the Democratic coalition. What's lost is a meaningful discussion of his positions on actual issues.