Right-wing media have once again attacked the federal food stamp program, the Supplemental Nutrition Assistance Program (SNAP), this time by misleadingly citing a projection that the program will cost $770 billion over the next decade. In fact, the Congressional Budget Office estimates that both food stamp enrollment and costs will decline during that period as the economy improves.

WSJ: SNAP Will Cost $770 Billion Over “The Next 10 Years. ... And You Wonder Why The U.S. Had Its Credit-Rating Downgraded?” In a June 19 editorial, The Wall Street Journal wrote:

The next time someone moans about Washington “austerity,” tell them about the Senate's food stamp votes on Tuesday. Democrats and a few Republicans united to block even modest reform in a welfare program that has exploded in the last decade and is set to spend $770 billion in the next 10 years.

Yes, $770 billion on a single program. And you wonder why the U.S. had its credit-rating downgraded?

When the food stamp program began in the 1970s, it was designed to help about 1 of 50 Americans who were in severe financial distress. But thanks to eligibility changes first by President George W. Bush as part of the 2002 farm bill and then by President Obama in the 2008 stimulus, food stamps are becoming the latest middle-class entitlement.

A record 44.7 million people received food stamps in fiscal 2011, up from 28.2 million as recently as 2008. The cost has more than doubled in that same period, to $78 billion, and is on track to account for 78% of farm bill spending over the next decade. One in seven Americans now qualifies. [The Wall Street Journal, 6/19/12]

Fox's Varney: SNAP “Will Consume $770 Billion In the Next Ten Years” And We “Can't Even Tinker With It.” From the June 20 edition of Fox News' America's Newsroom:

STUART VARNEY [Fox Business host]: Look, the whole world is looking at America to see if we are prepared to rein in, at least a little bit, our entitlement programs, because we want to rein in our burgeoning debt. Well, judging by the performance of the U.S. Senate yesterday, we are not prepared to make even minor changes in a program like food stamps. There were two proposals up for a vote. Number one, stop giving food stamps to people with tens of thousands of dollars in the bank. Number two, stop the Feds from paying a half billion dollars to the states to go out and sign up more people for food stamps. Two very modest reform proposals. Both of them were roundly defeated. Which means we are not prepared to rein in even a little bit this program which will consume $770 billion in the next 10 years. And as you said, Martha, one in ten -- one in seven people now get it. Can't even tinker with it.

MARTHA MacCALLUM (co-host): It's an incredible number when you think about it that way. And Stuart, one of the things that's been pointed out that has changed is people's attitude toward receiving them. It used to be something that, you know, I guess, people -- it was just a hit to somebody's pride basically, if they were in that situation and nobody wanted to be in that situation where you had to ask the government for help with food stamps. That has changed to some extent.

VARNEY: Yes, it absolutely has changed. It is now an entitlement. It is your right. Driving into work this morning I heard on the radio an ad for food stamps. It was -- food stamps were advertised as a health product, a weight loss product. Go out, sign up, get this free government food. You might even lose weight. You'll certainly be healthier. It was an entitlement pushed at me over the radio as I was driving into work today. The attitude has completely changed. [Fox News, America's Newsroom, 6/20/12, via Media Matters]

In Fact, CBO Projects Food Stamp Costs And Enrollment Will Decline Over The Next Decade

Spending (mostly for benefits and administrative costs) on SNAP in 2022 will be about $73 billion, CBO projects. In inflation-adjusted dollars, spending in 2022 is projected to be about 23 percent less than it was in 2011 but still about 60 percent higher than it was in 2007. [CBO, April 2012]

In the overview of its report, CBO included the following graph showing a projected decline in SNAP spending:

In the overview of its report, CBO included the following graph showing a decline in SNAP enrollment after 2014:

Increase In Food Stamps Enrollment Is Due To The Economic Downturn

CBPP: “The Record-Setting SNAP Participation Levels Are Consistent With The Extraordinarily Deep And Prolonged Nature Of The Recession And The Weak, Lagging Recovery.” In an April 18, 2012 report, the Center on Budget and Policy Priorities (CBPP) stated:

After unemployment insurance, SNAP historically has been the most responsive federal program in assisting families and communities during economic downturns. This downturn has been no exception: national SNAP enrollment is at an all-time high.

The record-setting SNAP participation levels are consistent with the extraordinarily deep and prolonged nature of the recession and the weak, lagging recovery. Long-term unemployment reached its highest levels on record in 2010 and has remained at these unprecedented levels ever since. 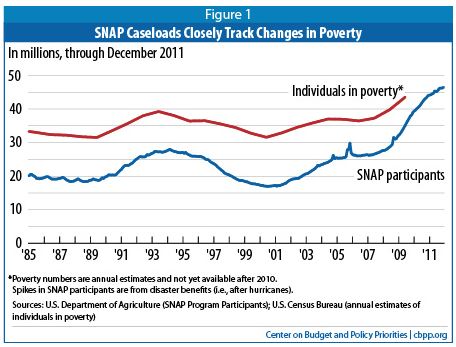 SNAP swelled because the economy entered the worst recession since the Great Depression and remains severely depressed even 18 months after the official recovery began. [EPI, 2/2/12]

Zandi: “Extending Food Stamps Is The Most Effective Way To Prime The Economy's Pump.” In his July 24, 2008, testimony before the House Committee on Small Business, Mark Zandi, chief economist and co-founder of Moody's Economy.com, stated:

An effective stimulus package could include a gas tax holiday, expansion of the food stamp program, a payroll tax holiday, aid to state governments, extension of the investment tax incentives, and increased infrastructure spending. The biggest lift from this stimulus would go to lower-income households struggling to pay soaring gasoline and food prices and to small businesses getting hit hardest in the current downturn.

Extending food stamps is the most effective way to prime the economy's pump. A $1 increase in food stamp payments boosts GDP by $1.73. People who receive these benefits are very hard-pressed and will spend any financial aid they receive within a few weeks. Because these programs are already operating, increased benefits can be quickly delivered to recipients.

Zandi included with his testimony a table stating that a “Temporary Increase in Food Stamps” had the highest “Fiscal Economic Bank for the Buck” of any other potential stimulus provision he analyzed:

Based on Zandi's testimony, the Economic Policy Institute created the following graphic:

Elmendorf: “Transfers To Persons (For Example, Unemployment Insurance And Nutrition Assistance) Would Also Have A Significant Impact On GDP.” In his January 27, 2009, testimony before the House Committee on the Budget, CBO Director Douglas Elmendorf stated:

A dollar's worth of a temporary tax cut would have a smaller effect on GDP than a dollar's worth of direct purchases or transfers, because a significant share of the tax cut would probably be saved. The nonbusiness tax cuts in H.R. 1 would reduce revenues much more in calendar year 2010 than in calendar year 2009 because much of the reduction in taxes would be realized by households when they filed their returns in 2010. [CBO, 1/27/09]