We won’t run pieces that deny the reality of human-induced climate change. The scientific consensus on that point is overwhelming, and increasingly so.

Today, USA Today's editorial page is promoting a piece with the teaser “Science is not settled on climate”: 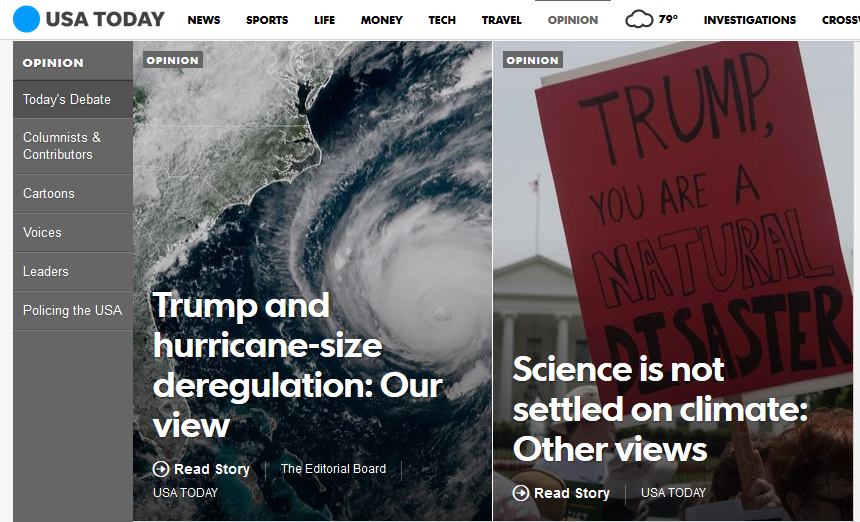 USA Today has a long track record of publishing climate denial on its editorial page, especially in the “opposing view” pieces that accompany the paper's editorials, as Media Matters has documented on multiple occasions. Unfortunately, it's now clear that trend didn't change after Sternberg made his pronouncement in January.

The newspaper ran a solid editorial today, noting that there is “reasonably strong scientific consensus” about the ways climate change makes hurricanes more damaging, and stating, “There is no scientific debate that the planet is warming.” Like recent editorials in other papers, it also criticized President Donald Trump for rolling back climate protections.

But the “opposing view” piece published along with the editorial was full of problems. It consisted of excerpts from four other outlets, first among them from a post on the right-wing website Townhall written by Matt Vespa. The excerpt from Vespa's piece included a number of factually inaccurate claims related to climate change, but this was the most notable: “Sorry, the science is not settled on this matter.”

That's an obvious violation of Sternberg's stated policy not to publish pieces that deny climate science.

Vespa, an associate editor at Townhall, previously worked for right-wing website CNSNews.com, and he notes in his bio that he was “recipient of Americans for Prosperity Foundation's 2013 Andrew Breitbart Award for Excellence in Online Activism and Investigative Reporting.”

Despite those impressive journalistic credentials, Vespa's piece that USA Today quoted was loaded with old, recycled material. A number of the same claims and phrases appear in a post Vespa wrote in 2015 for the right-wing website Hot Air. For example, he wrote in the 2015 post, “We’re at the most industrialized point in human history–and air quality couldn’t be better, according to the EPA.” In his new post, he wrote, “We’re at our most industrialized in the U.S. and air quality couldn’t be better” -- a line included in USA Today's excerpt. Both of those sentences in Hot Air and Townhall linked to a 2010 blog post from the American Enterprise Institute, which has been funded by ExxonMobil and other organizations that have promoted climate denial.

Vespa's Townhall post included additional climate-denier talking points in a section that was not reprinted by USA Today. From his piece:

There was global cooling in the 1970s and early 1980s, and now we have global warming. The experts were wrong then, and they could be wrong now, which is why I’m not willing to gamble trillions on a brain trust that consistently shifts. Science is never settled; that’s why there are 40th, 60, and 87th editions of textbooks for chemistry, biology, physics, and so forth. The arrogant position that this is settled science is one that a liberal must take. There cannot be room for questioning, which creates cracks in the narrative that more government control in the hands of fewer people to enact changes gets undercut. It has to be settled in order to break institutions and bend them to do their bidding. That’s progressivism. All bow before Zod. Well, millions of Americans don’t—and we certainly aren’t going to give in to some liberal pet project that gambles with other people’s money on theories that could be as half-baked as when these folks thought glaciation would start again in the 1970s.

As Hurricane Florence is barreling toward the Carolinas, and numerous climate scientists are explaining how the storm is being worsened by climate change, USA Today chose to spotlight this piece.

We look forward to the day when USA Today does indeed cease publishing climate denial on its editorial page, but that day has not yet arrived.