Multiple white supremacist media figures, extremist outlets, men’s rights activists, and users of far-right anonymous message board 4chan rallied behind Fox News host Tucker Carlson after Media Matters unearthed audio of him making multiple sexist and racist remarks on a shock jock radio show between 2006 and 2011. According to his extremist fan base, Carlson was just saying “true things about women,” for which they declared, “Heil Tucker.”

Carlson made numerous misogynist and racist statements to radio show

While calling into a radio show, Carlson defended child rape and made multiple sexist and racist remarks. Between 2006 and 2011, Carlson spent approximately an hour a week calling in to the Bubba the Love Sponge Show, a popular shock jock radio program, to talk to the hosts about a variety of cultural and political topics. During those conversations, Carlson downplayed the actions of Warren Jeffs, who was involved in arranging illegal marriages between adults and underage girls; talked about sex and young girls; defended statutory rape; used derogatory language towards Iraqis and Afghans; and claimed former President Barack Obama (then a U.S. Senator) was not truly Black; among other things.

White supremacists revere Carlson. White supremacists openly admire Carlson’s ability to mainstream extremist talking points. Not only do they consider his show a platform to push their messaging, but they also view Carlson as an influential leader laying the way forward for their movement through his ideas. They have made it explicit on their shows and in their private chat messages.

Former Klu Klux Klan Grand Wizard David Duke suggested Jewish people were conspiring against Carlson by unearthing his audio. A teaser for David Duke’s radio show on the topic referred to the audio of Carlson as a “(((scandal))),” using the anti-Semitic dog whistle of the triple parentheses. During Duke’s March 11 show, his guest Augustus Invictus claimed that Carlson is being boycotted because he criticized Jewish members of the “mainstream media” who “sold us … wars” in his book Ship of Fools.

White supremacist podcast host Jared Howe: “This glorious son of a bitch doubles down, and praise is heaped upon him by his allies for it.” In the podcast he hosts on “crying Nazi” Christopher Cantwell’s site The Radical Agenda, Howe praised Carlson’s unapologetic response to the unearthing of his past misogynistic and racist comments. 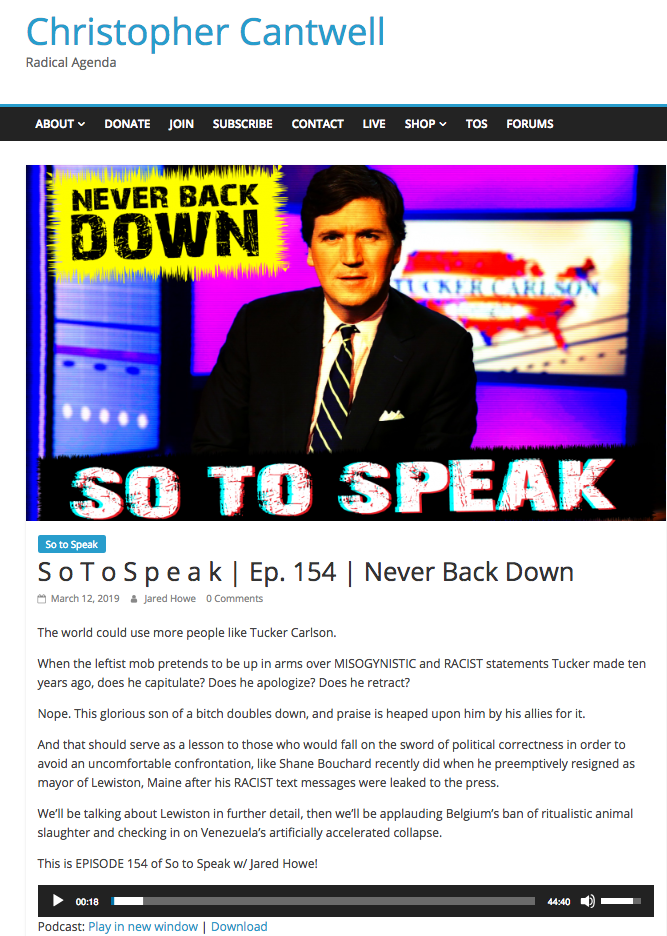 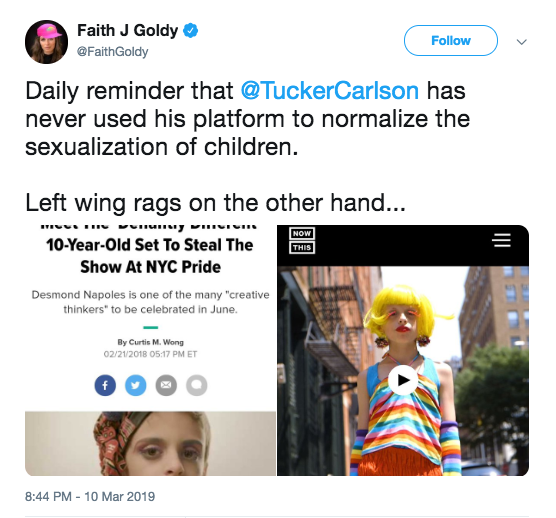 White supremacist outlet VDare retweeted Carlson’s segment defending himself. White nationalist site VDare retweeted Tucker Carlson’s tweet of his opening segment on March 11, in which he defended himself after the release of his radio remarks.

Scott Greer claimed a Wash. Post writer wanted Carlson “off the air.” Scott Greer, a former Daily Caller editor who was fired after it was reported he had previously written for an “alt-right” publication under a pseudonym, claimed Washington Post columnist Erik Wemple wants “Tucker off the air.” 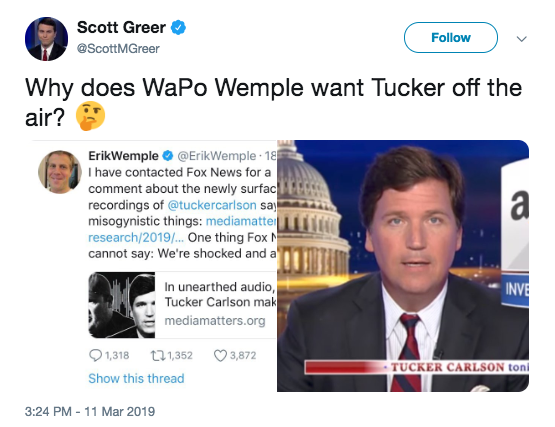 Daily Stormer: “Soros Attacks Tucker Carlson for Saying True Things About Women Ten Years Ago.” On his outlet The Daily Stormer, neo-Nazi Andrew Anglin claimed Carlson said “true things about women” and that he agreed “with all of” what Carlson said. 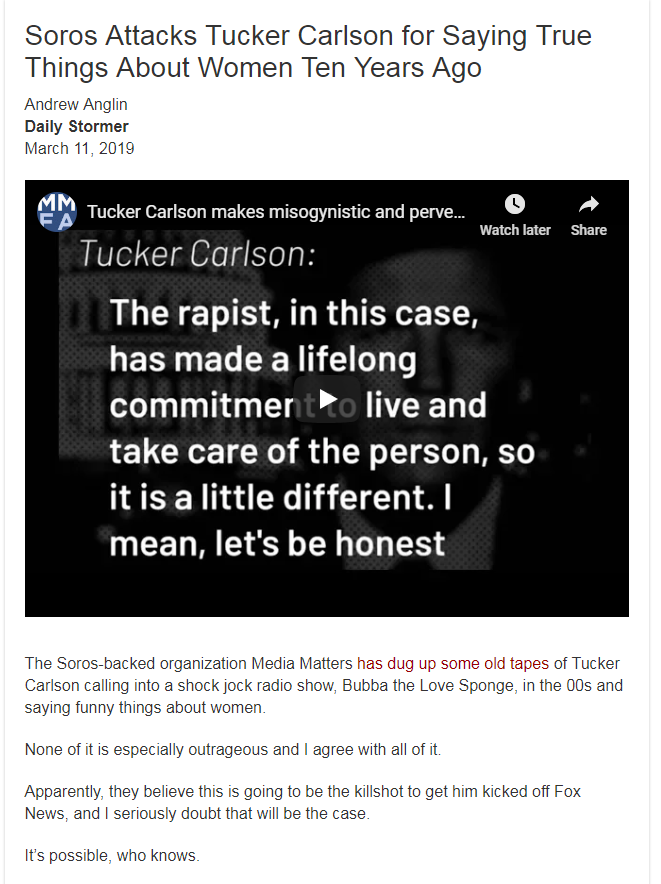 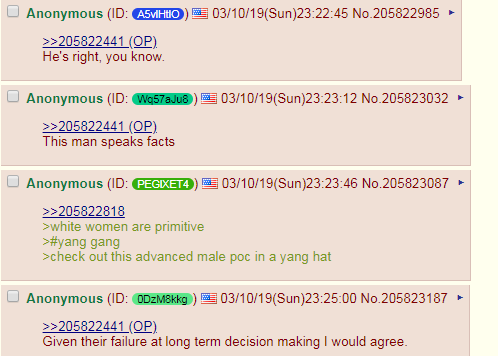 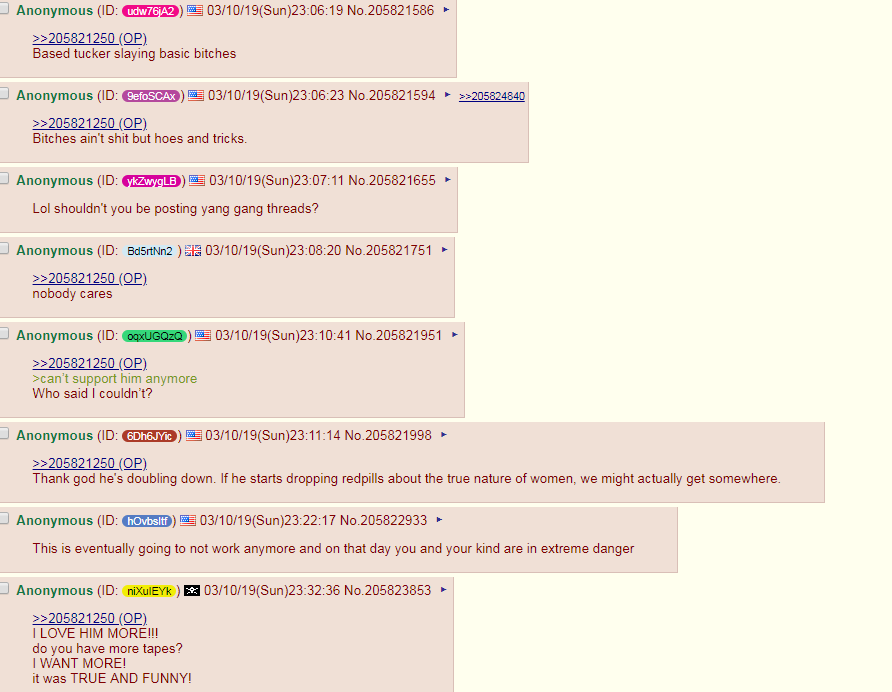 Roosh V forum: “My respect for” Carlson “has now skyrocketed.” A forum for the site of Roosh V, a men’s right activist who has been lauded within the “alt-right” for his misogyny, featured users praising Carlson’s remarks. 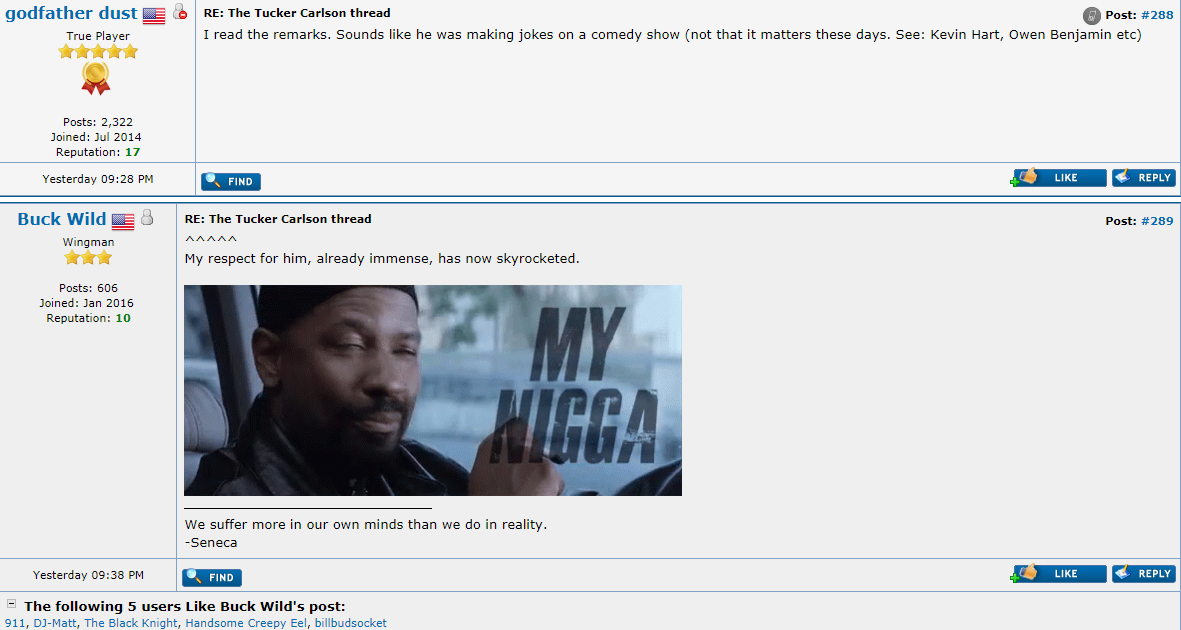 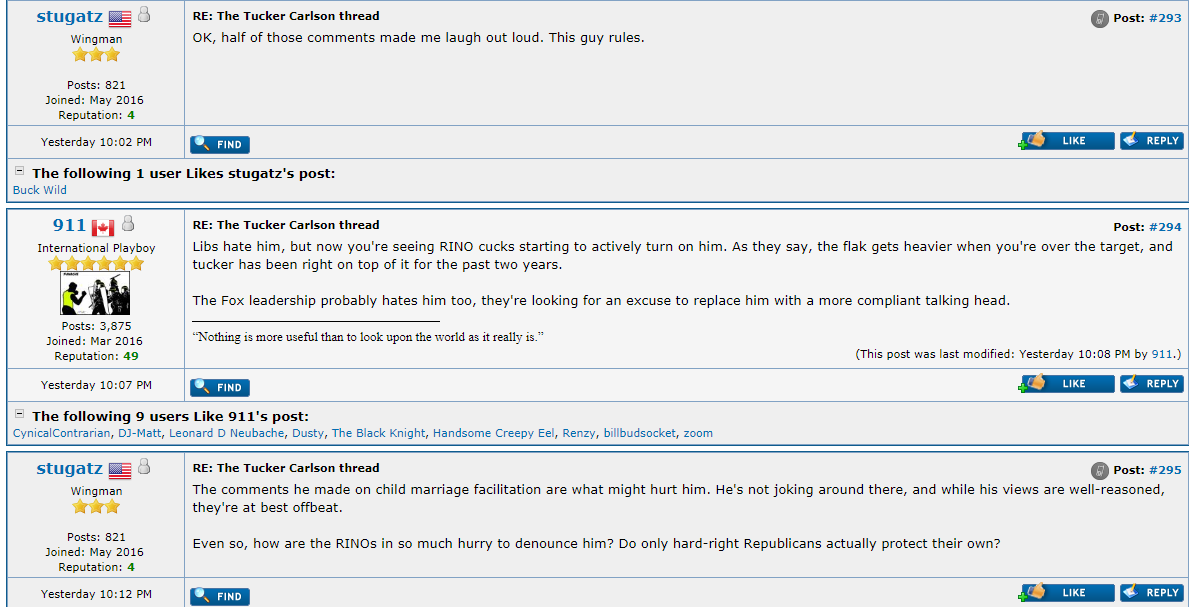 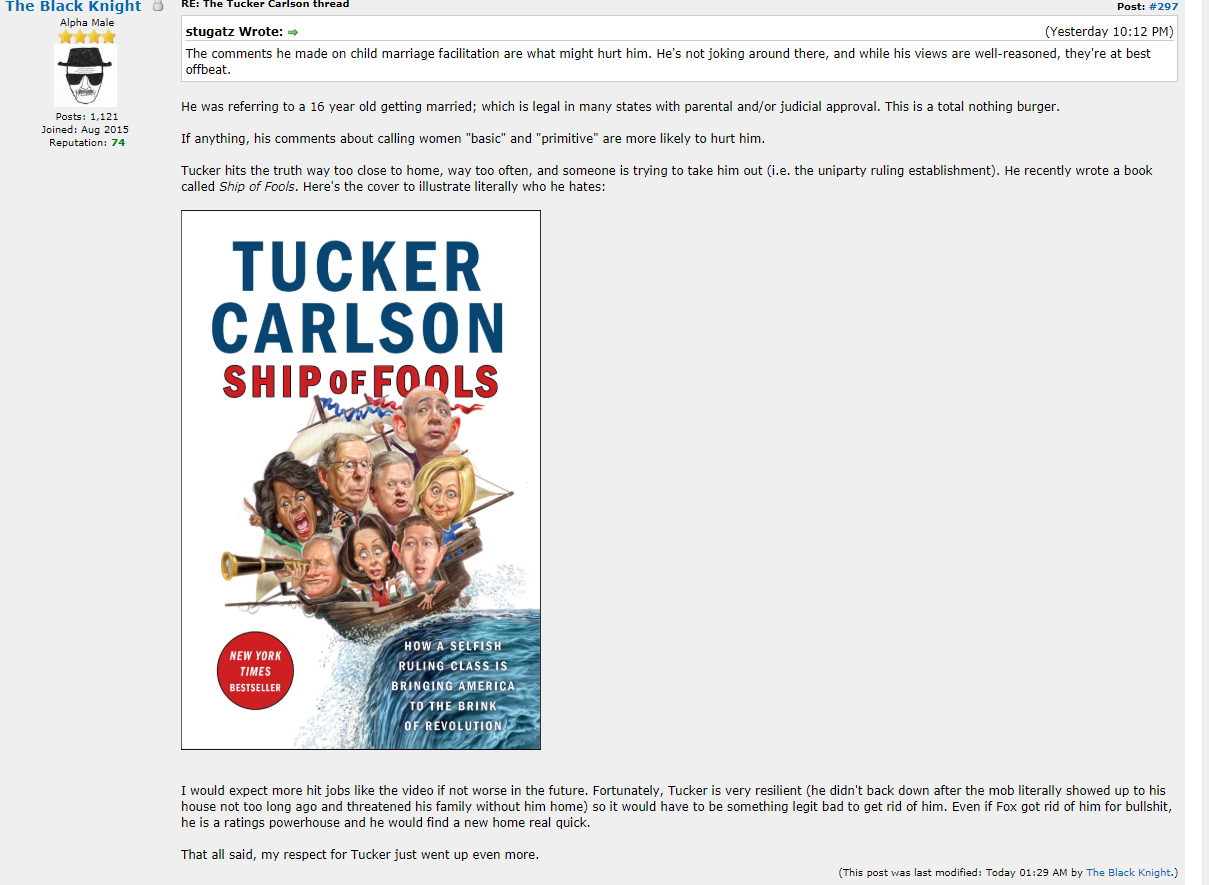