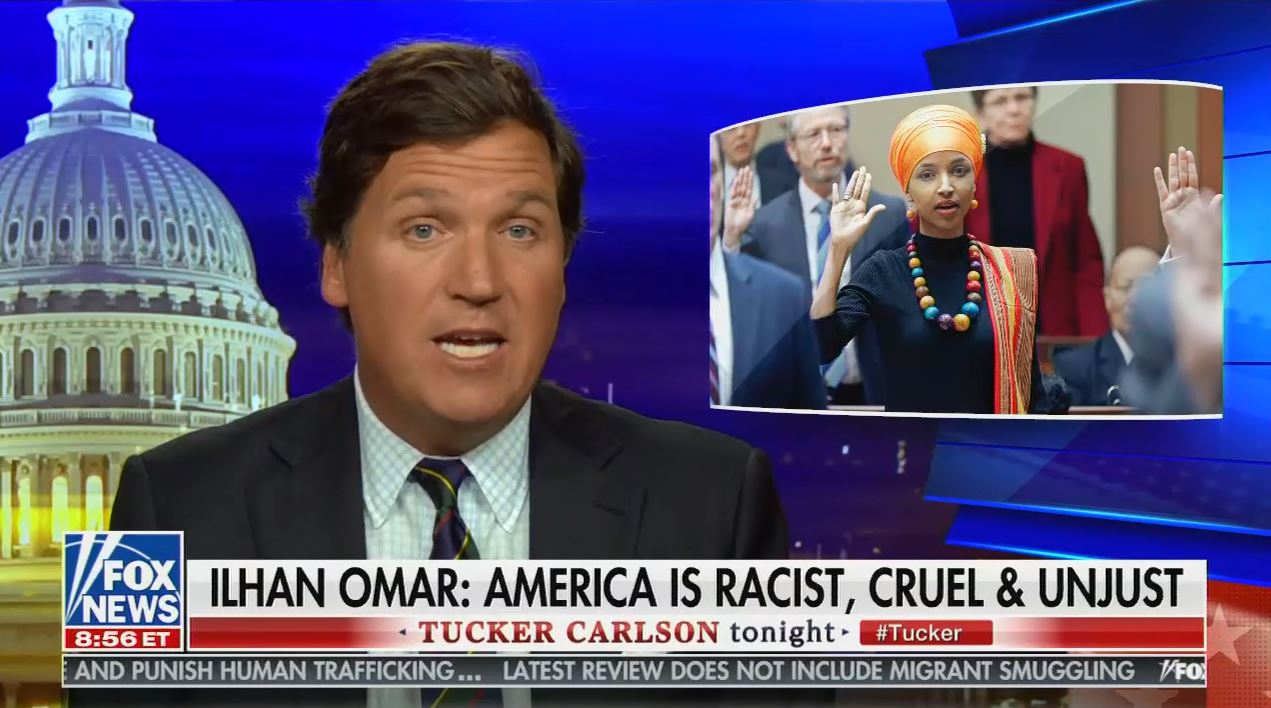 In his July 9 monologue, Tucker Carlson launched a baldly racist and nativist attack on Rep. Ilhan Omar (D-MN), a former refugee. Carlson claimed that Omar “has undisguised contempt for the United States and for its people” and that “maybe that's our fault for asking too little of our immigrants.”

Carlson also suggested that perhaps “we are importing people from places whose values are simply antithetical to ours,” drawing a comparison to the fall of the Roman Empire.

Not gonna lie, it’s kinda fun watching a racist fool like this weeping about my presence in Congress 🤣🤣

No lies will stamp out my love for this country or my resolve to make our union more perfect.

They will just have to get used to calling me Congresswoman! https://t.co/nRS13yWivK

Omar’s colleagues pushed back, and there were multiple calls for Fox to take action on Carlson:

It’s common for Tucker Carlson to make racist & sexist comments on his show, but this is a new low. @IlhanMN deserves an apology — Tucker deserves to be fired. This kind of hate is inexcusable, and it’s on all of us to call it out and demand better. https://t.co/lP2eUJ2u8x

The racism raging in our country should shock, frighten, and sadden all of us.

Will these purveyors of hate not be satisfied until someone is hurt?

These people who push an anti-immigrant agenda are *literally* also instruments of the Russian effort to divide and destroy us. https://t.co/GzNc5IMqwW

My colleague @IlhanMN fights each day to improve the lives of people throughout America. The comments from Tucker Carlson last night are vile. He spews racist, bigoted, and xenophobic views that make our country worse.https://t.co/TIr8HX2DRS

The anti-Muslim rant against @IlhanMN by @TuckerCarlson was not based in any policy or substance: it was just hate-speech. @FoxNews should #FireTuckerCarlson & advertisers should drop him. https://t.co/Otn6AddYXN pic.twitter.com/EX3ztjxO3Z

Even for Tucker Carlson, this is outrageously racist.

Advertisers need to wake up.

By financially supporting this show and the people who rubber stamp these messages, you are sponsoring white supremacy. Full stop. https://t.co/I3Q9BYcPYo

Last night, Tucker Carlson launched a racist attack on @IlhanMN saying that she “is a living fire alarm.”

Here’s who ran ads during that segment:
@StarKistCharlie@Nutrisystem@WeatherTech

RT to ask them if they support this hateful rhetoric. #DropFoxpic.twitter.com/9u64AdaHLi

Last night, Tucker Carlson launched a racist attack on @IlhanMN saying that she “is a living fire alarm.” This is dangerous white supremacist rhetoric and is inexcusable. Advertisers should not be underwriting Carlson's hate speech. #DropFox

History podcaster Mike Duncan called out Carlson’s false analogy regarding the fall of the Roman Empire:

“No country can import large numbers of people who hate it, and expect to survive, the Romans were the last to try that. With predictable results.” 😑😑😑 https://t.co/yfKCyzVjHP

tl/dr: these Fall of Rome tropes do not come from actual Roman history. They come from 19th century European depictions of the Fall of Rome. And those depictions sprang from prevailing colonial imperialist fears/pathologies about “uncivilized savages”

Many others spoke out against Carlson’s racism:

Shorter version: Muslims and browns scary. Will take over and replace Whites. Totally not a white supremacist conspiracy theory (but, you know, it is.) https://t.co/rqMuyOlCD4

The war on terrorism creates the opportunity for this line of attack. But everyone who uses it makes a choice to do so. https://t.co/K3e58ptlCJ

I don't know how I still allow myself to get stunned by Tucker's overt racism.

But he did it tonight. https://t.co/ENeY9zQc0s

can only imagine what he would have said about all the Jewish socialists who got off the boat a century ago and began complaining about American capitalism https://t.co/PZ7SfHyaYc

.@TuckerCarlson is living proof that xenophobia and bigotry have become dangerous to this country. https://t.co/tbmS0bdroL

Carlson says maybe “we’re asking too little of our immigrants” about a former refugee who became a member of Congress. https://t.co/AtOHNfOMFc

This is just straight up Nazi rhetoric. https://t.co/QWop3fhVJG

Self identified leftists, stop going on Tucker’s White Power Hour to agree with him https://t.co/liiLr41CrO

The line that sticks out the most to me here: “Maybe that’s our fault for asking too little of our immigrants.”

(Even for Carlson, this whole thing is shocking. The way he looks into the camera. Every line drips with seething resentment for immigrants.) https://t.co/B2Y0ph5siY

I'm so angry that somebody accused America of being racist that I am going to go on this racist rant. https://t.co/8LNOB8LkMP

In my experience, Americans most on warpath about “ohhh these outsiders threaten us,” like Carlson here, have spent little/no time living outside US

Again in my exper, Amers who *have* lived abroad recog that openness to world’s talent/energy is *the* US secret + real “identity" https://t.co/0FrBHewtZ0

I have seen a lot of white supremacist screeds from Tucker Carlson and this is pretty high up there in its disgusting racism. https://t.co/7QLYpT3coE

Weirdest thing about America is how it's socially acceptable to *be* a racist but it's entirely unacceptable and career-threatening to be *known* as a racist https://t.co/HNZrpmo0Dq

Today started with confirmation that @FoxNews host @seanhannity spent years pushing a dangerous conspiracy theory designed by Russian intelligence & ended with @TuckerCarlson inciting violence against a member of Congress. Fox News is literally a danger to our national security. https://t.co/mDtTAualeQ

Even for Tucker, this is over the top.

You go on this show, you implicitly co-sign this kind of shit. https://t.co/mxXqoLjY6k

He’s the main voice of the modern KKK. It’s beyond disgusting https://t.co/XTP3mSDw04

This seems shockingly racist even for the frozen fish heir who is known for blatant racism https://t.co/BVmayXBGRX

Stop going on his show. There is no excuse. https://t.co/XomOXW4a1n

Tucker Carlson is a racist shill and here he is unleashing astonishing vitriol on an American lawmaker https://t.co/bDjxzxPvcX

I believe the words @ewarren used to describe this were “hate for profit racket.”

When people show you who they are, believe them. https://t.co/Y2JEMfnf6g

I honestly think this might be the worst thing Tucker has ever said on his show — and that’s saying a lot. https://t.co/PUPXtVraUe

How does this deplorable human thumb have any bigger a platform than a blog he runs out of his mom's basement? https://t.co/anqZml8x4Q

Carlson is a racist and the right-wing base loves him because it is full of racists. He's not pretending, they're not pretending, I don't know why anybody else feels the need to pretend. https://t.co/CuKMat8WmE

This is really repulsive. Can we please not let this be normal? https://t.co/96VSiOavuq

This is dangerous. This is unacceptable. This is incitement against a sitting member of Congress. @TuckerCarlson has no shame. https://t.co/DGR3psNiya

Today in: What if Father Coughlin had a graphics department? https://t.co/E7EaPttWdh

Tucker Carlson is a white supremacist and if you play ball with him on anything, you're working for white supremacy too https://t.co/FJ9o2VC6iO

Well this is absolutely grotesque. https://t.co/rQNGVo5tXX

Imagine if Stormfront had its own television show https://t.co/zoynmr4fCB

Look I know this isn’t exactly a surprise but this clip is one where the words “we” and “our” do a TON of work https://t.co/yPLE1oHteL

Growing up in Mississippi, many of my classmates had parents that were KKK members.

There is ZERO difference in their position on race and Tucker Carlson’s. https://t.co/9ZhViERayb

And yet, many conservatives, including President Donald Trump himself, rallied to Carlson’s defense.