During the segment, Carlson said, “We do this topic a lot and we’re pretty conversant with the social science on it. I’ve never seen that study.” Perhaps Carlson should become more conversant with search engines, as a Google search returns numerous studies and articles published on this subject.

A 2018 Cato Institute study shows that “there were 50 percent fewer criminal convictions of illegal immigrants than of native-born Americans in Texas in 2015.” A Washington Post write-up of the study included this chart visualizing Cato’s data: 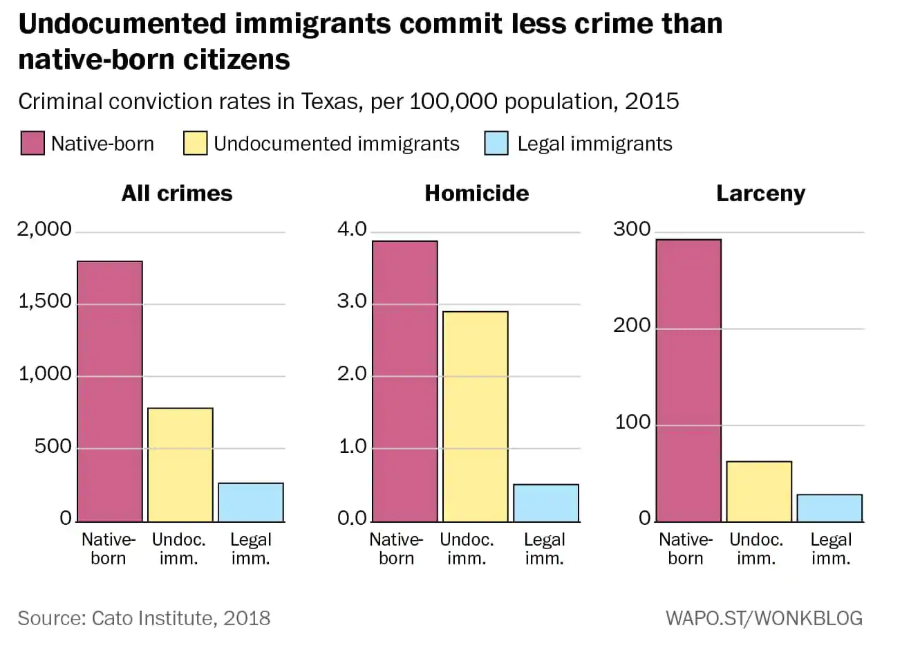 In August 2017, Politifact looked into a claim made by Antonio Villaraigosa that “undocumented immigrants commit less crimes than the native born,” a claim rated “mostly true.” In its ruling, Politifact quoted assistant professor and director of the Criminology and Criminal Justice Program at the University of Massachusetts in Boston as saying “the rhetoric of the ‘criminal immigrant’ does not align with the bulk of empirical research.”

Furthermore, a study completed by research scientists from four universities shows that while immigrant populations have increased in size during the last few decades, the crime rate has gone down in those same communities. According to The New York Times’ review, “In general, the study’s data suggests either that immigration has the effect of reducing average crime, or that there is simply no relationship between the two.”

Tucker Carlson’s refusal to acknowledge the reality of the academic literature on this subject is no accident. He has a well-documented history of embracing white supremacy and demonizing immigrants on his show, and white supremacists love him back. Tucker Carlson’s extremist views and fact-free demonization of immigrants has been one factor contributing to the loss of at least 24 advertisers in the last month.