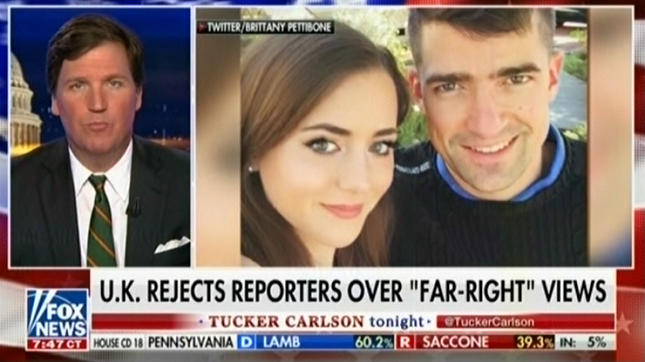 Fox News host Tucker Carlson used his primetime platform to defend “alt-right” Twitter troll Brittany Pettibone and others who were recently banned from entering the United Kingdom because of their extreme views. Carlson decried the move as an action from a country that “hates itself, its heritage, and its own people.”

Britain's Home Office explained in a statement that the border force “has the power to refuse entry to an individual if it is considered that his or her presence in the UK is not conducive to the public good.”

TUCKER CARLSON (HOST): Well, the U.K. is blocking conservatives from visiting that country. They say conservatives could be hazardous to the nation's diversity, somehow.

This past weekend, American YouTube personality Brittany Pettibone and her Austrian boyfriend were barred from entering the U.K., because they planned to interview Tommy Robinson, an outspoken critic of Islam.

Then, on Monday, British police halted a visit by Canadian journalist Lauren Southern, on the grounds she was, quote, “a radical Christian,” and therefore, possibly a terrorist.

Meanwhile, radical Muslims, more than 400 former ISIS fighters are believed to have re-entered Britain without any problem at all. Indeed, they were welcomed. Huh?

Katie Hopkins is a columnist with The Rebel. She wrote the book “Rude,” and she joins us now. Katie, it's great to see you. I mean, only a country that really hates itself, its heritage, its own people, would act like this.

I mean, what undergirds this? So, of course, for centuries, Britain sent forth Anglican missionaries to spread Christianity around the world -- and, by the way, they did -- and now, they would not let those same people in their own country, in favor of ISIS members. What animates this? Why -- Why the change? Why do they feel this way?