PragerU put out a video featuring CRTV’s Steven Crowder explaining that Columbus Day is “not about paying homage to America’s original inhabitants” and showing a racist depiction of indigenous people as cannibals wielding salt-and-pepper shakers.

PragerU is an online hub for right-wing propaganda that has made a name for itself by producing short explainer videos that get quickly propelled by YouTube’s virality algorithm. It has an incredibly strong following that leads to its videos raking in millions of views on YouTube and Facebook. On this occasion, PragerU gave its powerful platform to bigoted Crowder -- who recently referred to Christine Blasey Ford as a “lying whore” on his CRTV show -- to characterize initiatives against the erasure of original populations as a “charade” that is an “exercise in hating Western civilization.”

On 4chan, a hub for far-right extremism, users have latched onto right-wing media’s culture war outrage and historical revisionism surrounding Christopher Columbus. 4chan users framed the issue in white supremacist terms by celebrating Columbus because of his role in the genocide of people of color: 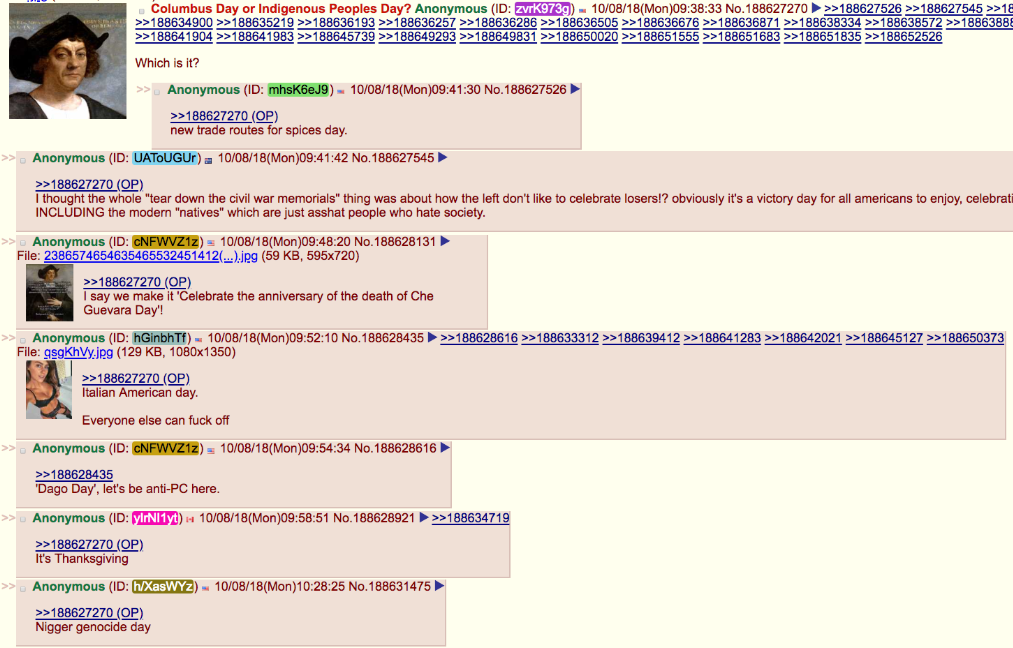 This outrage has become an annual tradition. Every year on this date, right-wing media figures rant against calls to celebrate indigenous people rather than Columbus’ bloody legacy, by lashing out with racist depictions of original populations. In 2017, Ben Shapiro’s Daily Wire published a cartoon showing Native Americans as cannibalistic savages who should be grateful for colonization, a take so racist even Shapiro had to apologize following the backlash.

And speaking about Columbus Day in 2005, Lou Dobbs said that he resented “those kinds of holidays” that have “nothing to do with celebrating America.” In the same context, Rush Limbaugh in 2010 linked disease rates among indigenous populations to evolution.

White supremacist darling Tucker Carlson has repeatedly bemoaned celebrations of indigenous people, characterizing them as an “attack on civilization” and claiming Europeans coming to America led to “far less human sacrifice and cannibalism.”