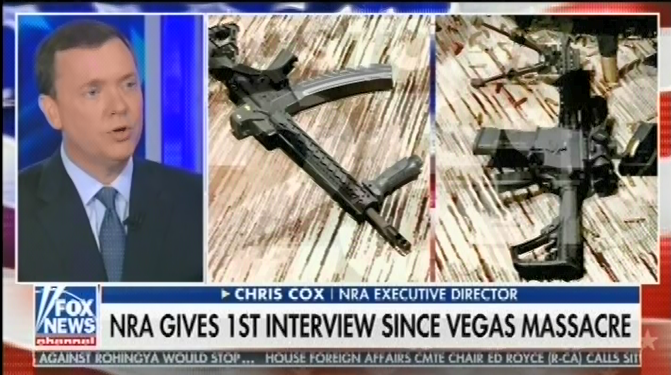 The National Rifle Association is attempting a craven sleight of hand in the wake of the deadliest mass shooting in modern U.S. history.

Amid outrage that the gunman who killed 58 people and wounded more than 500 equipped his firearms with an accessory that allowed him to fire rounds at a rate comparable to a fully automatic machine gun, the NRA has called on the Bureau of Alcohol, Tobacco, and Firearms (ATF) to “review” the legality of bump fire stocks. But the ATF does not have the authority to regulate bump fire stocks -- that power is reserved by Congress.

Facing scrutiny for pushing an agenda that allows mass murderers to maximize their body counts, the NRA’s top lobbyist Chris Cox turned to Fox News’ Tucker Carlson for an assist in the NRA’s attempt to trick the public. And where better to go than a cable news show that shamelessly provides cover for the disastrous Trump presidency?

In the NRA’s first televised public comments since the shooting, Cox appeared on Tucker Carlson Tonight to field softballs from Carlson and repeat the NRA’s carefully worded statement. Calling on Congress to loosen laws on how guns can be carried in public, Cox said, “Let ATF do their job, and Congress needs to do their job. Allow good, honest people the ability to defend themselves. Pass reforms like national right to carry reciprocity.” Tellingly, Cox added, “We didn’t talk about banning anything.” Throughout the appearance, Cox repeatedly drew a distinction between what he said Congress should do and what the ATF should do:

COX: Here’s what the National Rifle Association said, and we need to look at the facts here. Barack Obama’s administration approved the sale of bump stocks and these other devices. What we’ve said is ATF needs to do their job. ATF needs to look and if there’s technology that's come to the market that allow for a semi-automatic rifle to function as a fully automatic rifle, they need to be regulated differently. We didn’t talk about banning anything. We talked about ATF going back and reviewing whether or not these are in compliance with federal law and if not, let’s look at working together and figuring out a way to address this moving forward. At the same time, Congress needs to do their job and make sure that they’re going with meaningful solutions to these underlying problems, including respecting the Second Amendment.

COX: On these side issues, if ATF needs to look at something that functions as a fully automatic weapon, they’re the ones who approved it, they need to look at it.

Cox’s comments were a charade. It’s not up to ATF to determine whether bump fire stocks comply with federal law. As NBC politics reporter Alex Seitz-Wald noted on Twitter, the ATF said in a 2013 letter that bump fire stocks “are not subject to the provisions of Federal firearms statutes” and therefore the agency cannot regulate them:

The ATF already told Congress it doesn't have the authority to regulate bump stocks.

It’s clear the NRA is attempting a gambit where it appears to offer a concession that stems public outrage while also preserving the status quo on gun regulations. Journalists with more ethics and brains than Carlson shouldn’t fall for it.