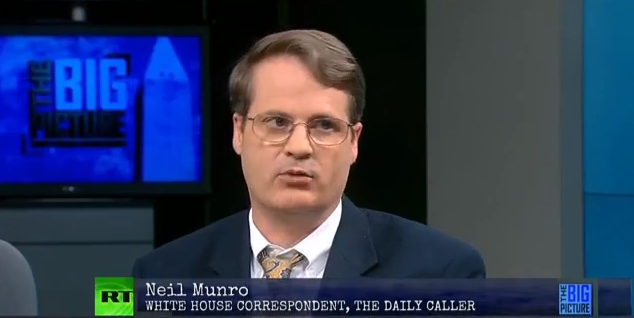 The Daily Caller is known for publishing its fair share of anti-LGBT opinion columns, but even the website's “straight news” reporting is replete with anti-gay demagoguery, evidenced by its latest report on the Obama administration's reaction to Uganda's extreme new anti-gay law.

On March 24, Daily Caller White House correspondent Neil Munro published a report on the Obama administration's move to cut aid to Uganda after President Yoweri Museveni signed legislation imposing life sentences for “aggravated homosexuality.” The Obama administration has moved to cut aid programs tied to the new law - including $6.4 million that would have gone to a primary backer of the measure. The administration has also rerouted aid for tourism and environmental protection to NGOs and halted a survey on populations at risk for HIV due to safety concerns.

Throughout his ostensibly “straight news” report, Munro depicted the Obama administration's decision as an example of its “hard-edged effort to punish countries that disagree with its gay rights agenda.” According to Munro, opposing life imprisonment for gay people is part of an effort to “rapidly elevate the status of gays in Africa”:

President Barack Obama is cutting U.S. aid for the poor African country of Uganda and blocking a health survey, because its elected government signed a popular and harsh law against homosexual conduct.

The penalty spotlights the administration's top-level and hard-edged effort to punish countries that disagree with its gay rights agenda.

The cuts are part of an ambitious foreign policy effort to rapidly elevate the status of gays in Africa and in other continents.

Munro noted that the Obama administration had also condemned Russia's law cracking down on so-called gay “propaganda” - which could include displays of affection between same-sex couples. Channeling Vladimir Putin's defense of that measure, Munro uncritically referred to the measure as a ban on “advocacy of Western-style gay rights” and repeated the baseless notion that criminalizing gay “propaganda” would somehow encourage population grown:

For example, shortly before the Russian government decided to seize the Crimea, Obama repeatedly urged the Russian parliament to reverse its popular law barring advocacy of Western-style gay rights.

[...]
The Russian law was intended to boost Russia's shrinking population, which is expected to drop from roughly 140 million to 120 million by 2050. In contrast, the populations of China and the Muslim countries to Russia's East and South are rising.

Munro also suggested that the administration's “elevation of gay rights to a central policy goal” may well be a bid to appease “wealthy gays” and “the few people who want to live as members of the opposite sex.” He compared the administration's support for gay rights internationally to Obama's endorsement of marriage equality - or, as Munro put it, “a legal redefinition of marriage that would shift its focus from aiding childrearing toward promoting companionship”:

Domestic politics may a play a role. In 2012, Obama's fundraising was boosted by wealthy gays after he endorsed a legal redefinition of marriage that would shift its focus from aiding childrearing towards promoting companionship for adults, including childless or single-sex couples.

It's not hard to detect the subtext in Munro's writing; the “poor African country of Uganda” is being “punished” by the Obama administrations “hard-edged” support for a “gay rights agenda,” which is being pursued to appeal to “wealthy gays” back home. Uganda, not the gay people now being imprisoned by its government, is the victim.

Munro doesn't mention that Uganda's law has triggered a "media witch-hunt" against Ugandans accused of being gay, or that the country has a history of violent crime against gay activists (though he does take time accuse the administration of ignoring the persecution of Christians abroad).

It's a perfect example of how The Daily Caller's supposedly “straight news” coverage is used to advance anti-gay demagoguery, and the latest example of the outlet's willingness to criticize the Obama administration's pro-LGBT international efforts by parroting the talking points of some of the world's most homophobic governments.

Speaking with then-Washington Post media critic Howard Kurtz upon launching The Daily Caller in 2010, founder Tucker Carlson vowed that his website would not be “enforcing any kind of ideological orthodoxy on anyone.” But with anti-gay talking points coloring even the website's purportedly “straight news” coverage, Carlson's promise rings hollow.