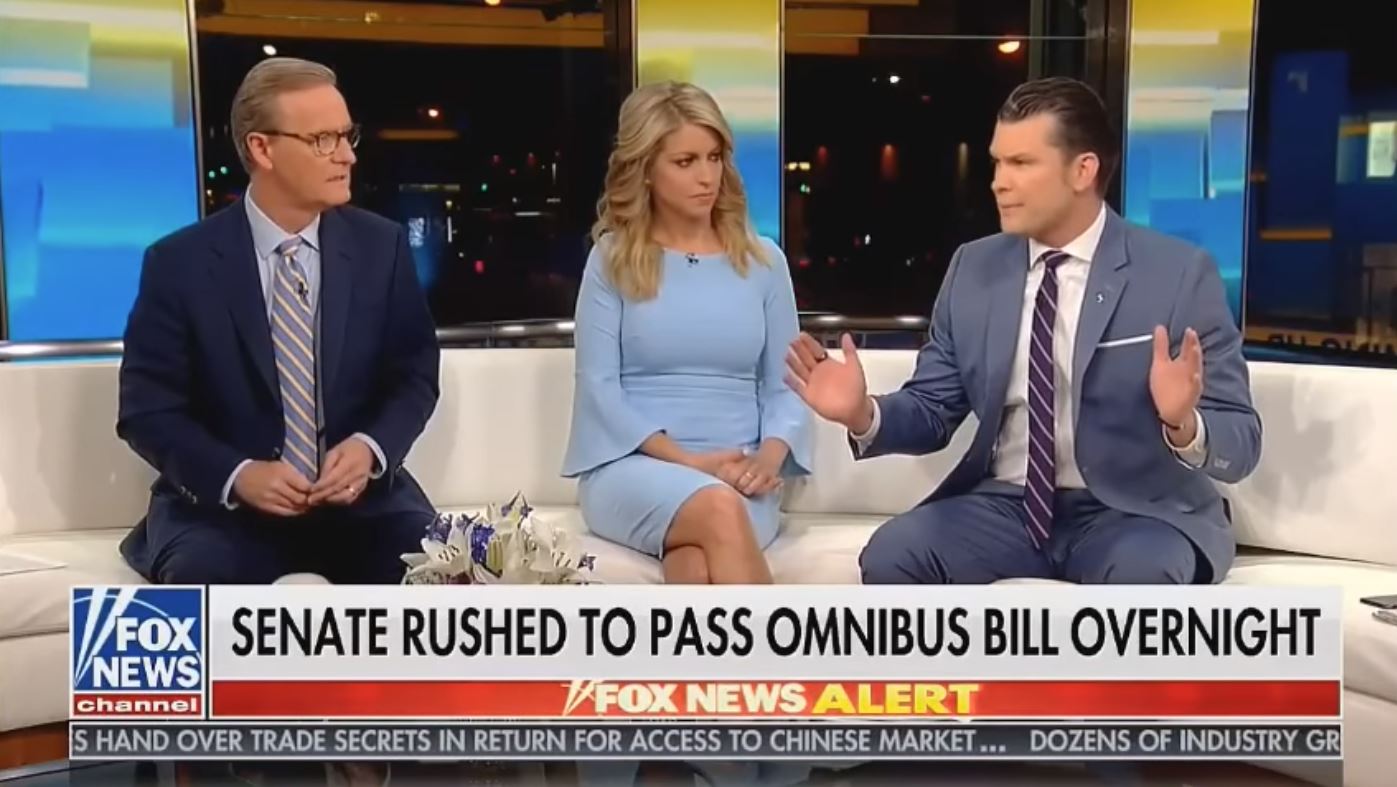 Welcome to Executive Time, a recurring feature in which Media Matters senior fellow Matt Gertz explores the intersection between President Donald Trump’s Twitter feed and the hours of cable news he reportedly consumes daily, with a special focus on his favorite morning program, Fox & Friends. You can follow Matt’s work on Twitter @mattgertz and see previous installments in this series here.

The omnibus spending bill was supposed to be a done deal. The legislation, which provides $1.3 trillion in spending, passed both the Senate and the House of Representatives by wide, bipartisan margins. Three different senior administration officials had assured reporters over the past two days that President Donald Trump supported the bill and would sign it. Fears of the third federal shutdown this year, which would begin at midnight tonight without new funding legislation, abated.

And then this morning, just before 9 a.m. ET, the president tweeted that he was having second thoughts:

I am considering a VETO of the Omnibus Spending Bill based on the fact that the 800,000 plus DACA recipients have been totally abandoned by the Democrats (not even mentioned in Bill) and the BORDER WALL, which is desperately needed for our National Defense, is not fully funded.

It’s hard to say what spurred his tweet. But earlier this morning on Fox & Friends, co-host Pete Hegseth savaged the legislation in similar terms:

On Fox & Friends this morning, Pete Hegseth said of the omnibus, “this is a swamp budget, this is a Mitch McConnell special,” savaged it because “no wall.” pic.twitter.com/tTAIWj5til

Trump watches Fox & Friends regularly and has sought out Hegseth -- reportedly a top contender to join his cabinet -- for advice. This might be a case of the Trump-Fox feedback loop in action, with the network’s personalities effectively changing White House policy by influencing the president through the television. The president “obviously turned on Fox News this morning, saw people criticizing the deal, and got mad,” a White House official told Politico.

Hegseth isn’t the only Fox Trump supporter to savage the omnibus. Last night, Tucker Carlson claimed that it “reads like something the Democratic leadership put together” and slammed its immigration provisions, particularly the lack of border wall funding. Laura Ingraham likewise savaged it as a “boondoggle” and a “rotten piece of fish” that violated Trump’s wall promise, adding that it was “an embarrassment to the president” and “not what the American people voted for.” (Sean Hannity, a sometime Trump adviser, has claimed that he has “some insight” that makes the bill acceptable.) Both before and after Trump's tweet, other Fox personalities have also encouraged Trump to veto the bill.

If it sounds absurd that the president might shut down the government based on a Fox segment, recall that in January, Trump appeared to withdraw his support for major surveillance legislation on Twitter after watching a Fox contributor turn to the camera and say, “Mr. President, this is not the way to go.”

While the president walked back his tweet and signed the surveillance bill, some reporting indicates that the president is serious about the omnibus, with a White House source telling Politico there is an “extremely high” chance of a shutdown.

As the president becomes more comfortable in his role, he has also become more combative, pushing out staff who try to rein him in and demanding that his preferences -- like the tariffs his top economics staffers opposed -- become policy. As of yet, there’s no sign that Trump intends to turn back. Which means we could be headed for federal government shutdown triggered by the president’s favorite cable news channel.