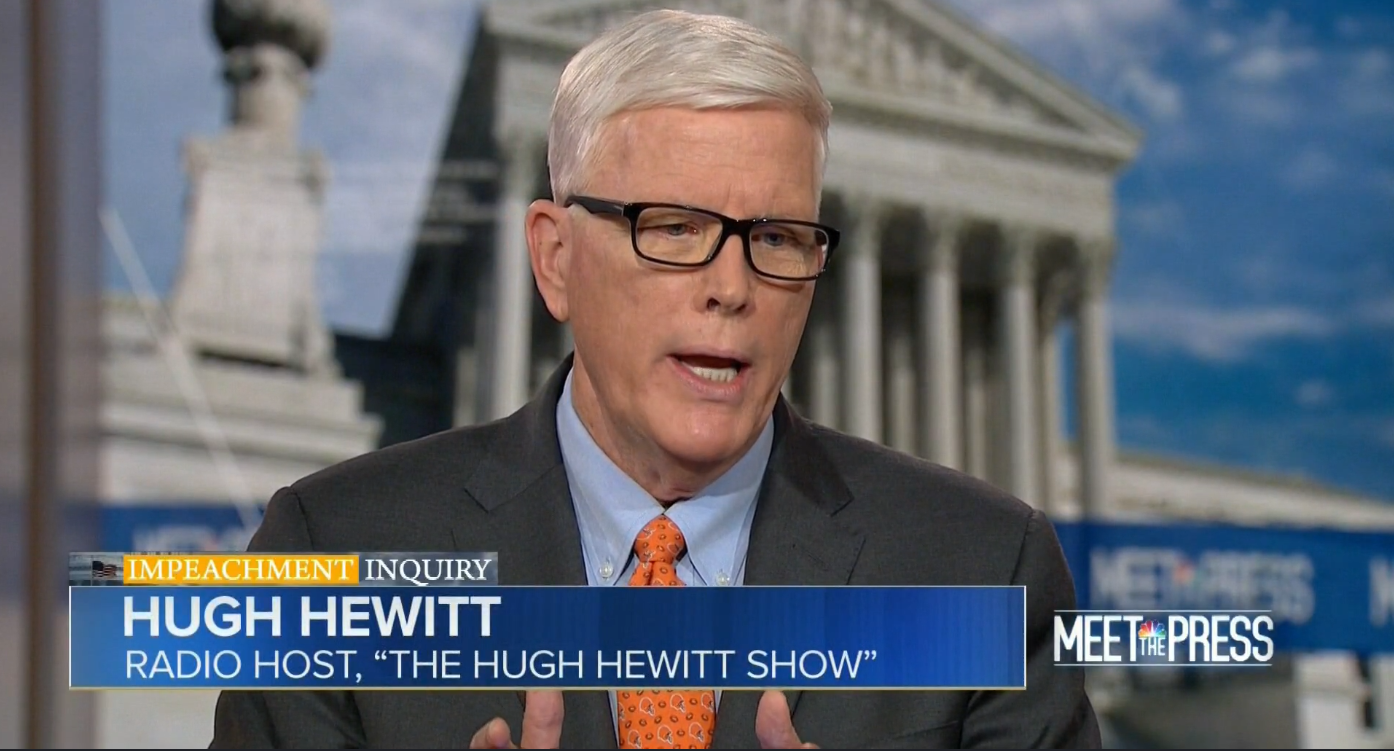 This week, right-wing talk radio host Hugh Hewitt has been continuing his efforts to justify President Donald Trump’s actions in the Ukraine scandal. He’s claimed that Trump’s pressure on the Ukrainian president to investigate political rival Joe Biden and his son Hunter — and the foreign help Trump sought to discredit the Mueller investigation — is all a legitimate use of American foreign power, that the controversy around that pressure is a “nothingburger,” and that the impeachment inquiry into Trump’s actions is “a coup.”

Hewitt’s comments take his long history of putting an intellectual gloss on partisan Republican hackery, and now Trump sycophancy, to new depths. So why do media outlets treat him like a mainstream center-right commentator, and why do established journalists appear on his radio show?

When the transcript of the phone call between Trump and Ukrainian President Volodymyr Zelensky was released, Hewitt wrote a September 25 opinion column in The Washington Post titled “Impeachment-minded Democrats, welcome to Al Capone’s vault. Look familiar?”

Hewitt called the “hugely hyped rough transcript” a “nothingburger” that would embarrass Democrats, and he even seemed to make a virtue of Trump’s behavior in the phone call:

True, a more circumspect president might have steered clear, in the call with Zelensky, of discussing Ukraine’s history of corruption. And another president might have considered it bad form to bring up former vice president Joe Biden’s son, Hunter, and his involvement with a Ukrainian energy company.

But Trump isn’t circumspect. If something is on his mind, that’s what he says, and he speaks directly, not with diplomatic evasions.

When the whistleblower complaint was released the next day, Hewitt responded with a tweet alleging that it was part of a wide-ranging conspiratorial “cover up”:

Then on Sunday, September 29, Hewitt appeared on Meet the Press and suggested that Hunter Biden should’ve been under full government surveillance since 2014 — apparently leaving moderator Chuck Todd dumbstruck; he eventually said, “I have no idea how that is even remotely relatable,” but promised to read Hewitt's column.

Ironically, Hewitt wrote another Washington Post column, on Monday, titled: “If you want the truth on impeachment, stay away from the fringes.” Yet during his radio show the same day, Hewitt described the impeachment inquiry as “a coup attempt,” saying, “The rogue FBI attempted a coup against Donald Trump and now this is another coup. … And everybody gets it, everybody knows it, everybody understands. From the beginning, this is not about the phone call, it’s not about Zelensky. It’s part of an attempt to take out Donald Trump. And it’s illegitimate. It’s completely illegitimate.”

Later in the week, on the October 2 edition of his radio show, Hewitt interviewed National Journal editor Josh Kraushaar and insisted that there is no evidence that Trump held back military aid from Ukraine over this matter, adding that if there does end up being such evidence, he still won’t change his mind about the propriety of Trump’s actions.

Hewitt then engaged in a bizarre exercise in moral equivalency: Trump’s withholding of military aid to Ukraine while seeking to pressure the Ukrainian president to investigate his political opponent would be similar to Congress seeking to cut off arms sales to Saudi Arabia after that regime’s murder of Washington Post columnist Jamal Khashoggi.

“Was that not the use of foreign aid to achieve a political end?” Hewitt asked rhetorically.

(Kraushaar pointed out the obvious difference: In the case of Saudi Arabia, there was a brutal murder of a journalist, “and the United States and the Congress certainly tried to punish it. With Ukraine, there doesn’t seem to be anything on their — this whole corruption seems to stem from something Hunter Biden did, not anything that the Ukrainian government did.”)

The next day, Hewitt hosted Michael Shear, the White House correspondent for The New York Times, on his show. Hewitt complained that the press had not covered Hunter Biden’s business dealings in Ukraine — and he even floated the possibility that the younger Biden might be an “agent of influence.”

In response, Shear explained that the press has covered Hunter Biden’s business dealings.

Hewitt hosted Todd later in the show and pressed the Khashoggi comparison again, saying that when Khashoggi was killed, “every journalist wanted the United States to use every power to punish.”

Hewitt then found a chance to return back to their misunderstanding from Sunday, laying out his own elaborate conspiracy theory in support of Attorney General William Barr’s investigation into the origins of the Mueller probe over Russian interference in the 2016 election — a narrative in which Trump is the victim of an elaborate global frame-up:

“Here's what I think is going on, I'll just put it out there for you,” Hewitt said, in an effort to straighten out a misunderstanding. “I think that Christopher Steele ran a counter-op against a counter-intelligence operation in the United States. It sucked in [James] Comey, [Andrew] McCabe, [Peter] Strzok, [Carter] Page — maybe Susan Rice, maybe Ben Rhodes, maybe a whole bunch of people, maybe John Brennan — that he played them, that Christopher Steele is dirty. That's what I think.”

And for his various theories, Hewitt has attracted praise from an important fan:

This is not Hewitt’s first time courting controversy in a matter involving the impeachment of a Republican president. Back in 1990, when Hewitt was the executive director of the newly opened Richard Nixon presidential library, he attempted to screen the documents that would be stored in the library and who could access them, based on the content of the proposed work.

“I don't think we'd ever open the doors to Bob Woodward. He's not a responsible journalist,” Hewitt said of one of the two reporters whose work helped to bring down Nixon’s presidency, telling the Los Angeles Times that Woodward and Carl Bernstein’s 1976 book The Final Days was “unsourced gossip.”

Hewitt’s decision was rescinded soon afterward, and he stepped down from his position at the library just two months later. But the incident remains illustrative of his approach to executive power and accountability.

With such a long record showing his authoritarian and conspiratorial mindset, the question remains: Why do mainstream media take him seriously?