Despite TikTok’s commitment to supporting National Eating Disorders Awareness Week, the platform continues to host content that both glorifies and promotes eating disorders.

Even though news outlets have emphasized the prevalence of this type of content on TikTok many times, the platform has continued to fumble in handling this serious issue with the care it deserves. BuzzFeed highlighted TikTok’s pro-eating disorder content in February 2020, and Wired did the same in March 2020. In December, both The Guardian and Insider reported on the prevalence of TikTok videos that promote anorexia along with common misspelling tactics users employ to circumvent content bans.

Eating disorders can develop at any age, but studies show that teenagers and young adults are at the highest risk of developing eating disorders, which is particularly troubling given the prevalence of young users on the platform. About 60% of U.S. TikTok users are between the ages of 16-24, and a third of U.S. TikTok users could be 14 or under. The National Eating Disorder Association (NEDA) reports that “young people between the ages of 15 and 24 with anorexia have 10 times the risk of dying compared to their same-aged peers.”

Media Matters has documented many content loopholes that accounts are using on TikTok to circumvent banned terms promoting disordered eating. The following are just a few examples that provide some insight to the tactics used to evade content bans.

“ProAna” means pro-anorexia and is a blocked search term. However, users have begun to replace letters with numbers in order to circumvent the ban.

The search term “Anorexia” is also blocked by the platform, but Media Matters has identified at least 13 active search terms that are simply minimal spelling variations of the word anorexia that evade the filter.

The search term “Thinspo,” meaning “thin inspiration,” is blocked from the platform. However, at least three spelling variations of this term also remain active.

“Pro Eating Disorder” is a blocked search term, but at least two variations of the blocked phrase remain active.

“Ballerina Tea,” also referred to as “China Slim Tea,” has gone viral on TikTok as a weight loss solution, but clearly meets the diagnostic criteria for bulimia. Ballerina Tea is an extreme herbal laxative tea, but TikTok users are framing it as a “weight loss hack.” Laxative abuse is a dangerous type of purging that most commonly causes extreme dehydration, but also increases a user’s risk of colon cancer. The hashtag #BallerinaTea has over 4.1 million views and #ChinaSlimTea has over 31.6 million views. 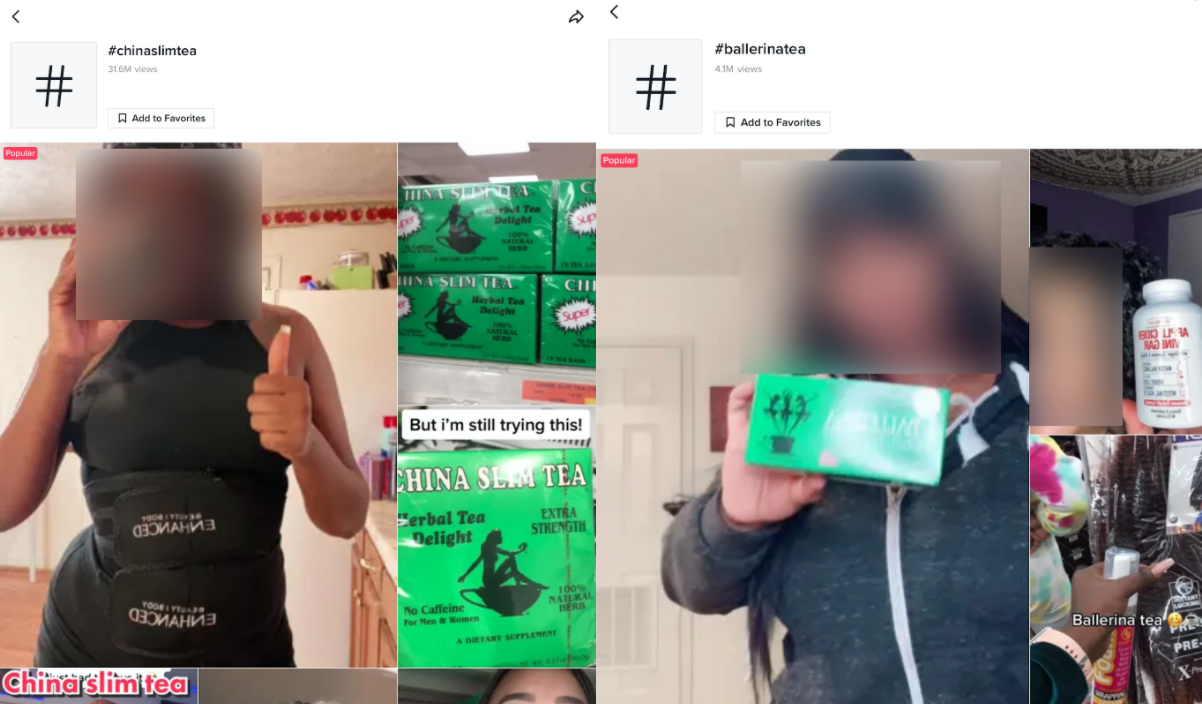 TikTok should learn from the mistakes of other social media platforms, not repeat them

Content promoting disordered eating isn’t exclusive to TikTok and has unfortunately been around for many years. Most notably, Tumblr was one of the main hubs for such content until it finally cracked down in 2014.

The same well-documented content evasion practices used on Tumblr for years are now being repeated on TikTok. Users are turning to intentional misspellings and word alterations to evade content filters. There is no excuse for a multibillion-dollar company to not be able to identify and moderate pro-eating disorder spaces, especially when the ban-evasion tactics have been repeated for years.

Communities pushing disordered eating are not the only ones using these evasion tactics on TikTok. In fact, Media Matters has documented far-right movements using the same strategy to circumvent content bans, and they often get away with it.

According to an analysis of websites promoting disordered eating published in 2010 by the American Journal of Public Health, “the high prevalence of interaction opportunities in the pro-eating disorder community has the potential to be extremely harmful if viewers are learning dangerous behaviors from one another, particularly if they are similar in age and gender.” Even more worrying, it suggests that “discussing techniques and perceived benefits may also have contagious effects on those not yet committed to the behaviors.”

There is no denying the danger of TikTok allowing pro-eating disorder content to remain on the platform. Because of how hyper-tailored TikTok’s algorithm is to the user, it is troubling to know that those most vulnerable to disordered eating content don’t even have to seek it out as they are most likely to have it delivered to their “For You” page.