“Content and accounts that promote QAnon violate our disinformation policy and we remove them from our platform. We've also taken significant steps to make this content harder to find across search and hashtags by redirecting associated terms to our Community Guidelines. We continually update our safeguards with misspellings and new phrases as we work to keep TikTok a safe and authentic place for our community."*

A QAnon conspiracy theory celebrating the announcement of President Donald Trump’s COVID-19 diagnosis as a signal for the impending mass arrest and execution of his “deep state” enemies is spreading on TikTok through the use of popular hashtags. Media Matters has identified 14 Qanon-affiliated hashtags and variations that should be subject to removal for blatantly violating TikTok’s community guidelines against misinformation.

Misinformation about Trump’s COVID-19 diagnosis is able to circulate quickly and widely on TikTok because the platform has yet to address the ways QAnon followers easily circumvent its community restrictions. With slight adjustments to the spelling and arrangement of hashtags, TikTok’s QAnon community is able to continue heavily circulating misinformation that is allegedly banned from the platform.

In reviewing content on TikTok promoting conspiracy theories about Trump’s COVID-19 diagnosis, Media Matters found 14 QAnon-affiliated hashtags with over 488 million combined views. Many of the hashtags identified are just slight variations of other QAnon hashtags which the platform has already banned, but these new variants remain active and continue to spread the same misinformation. Several of the hashtags are explicitly QAnon-affiliated and have yet to be removed.

TikTok has consistently struggled to control the spread of QAnon misinformation on its platform. Although it has previously acted to remove some instances of misleading content or hashtags, the continued circulation of conspiracy theories about Trump’s COVID-19 diagnosis highlights why TikTok must work proactively to curb QAnon misinformation, rather than just enforcing its policies reactively when faced with public scrutiny.

The conspiracy theory, which emerged after Trump was diagnosed with COVID-19, claims that he is actually perfectly fine and the announcement really meant the president is in hiding to prepare for mass arrests, military tribunals, and executions of alleged members of the “deep state,” a supposed cabal of satanic high-ranking officials who they claim are secretly operating global pedophile rings. QAnon followers use a variety of “Q drops” -- clues from the central figure in the conspiracy theory, known as “Q” -- to substantiate the conspiracy theory. Their new claims about the president’s diagnosis are based on the supposed connection between a Q drop from weeks earlier with a picture of a Mickey Mouse clock with hands pointing to 10 and 2 and Trump’s tweet announcing his COVID-19 diagnosis on October 2, or 10/2. QAnon supporters have also pointed to other supposed messages from Q as further evidence.

The hashtags “#RedOctober,” “#TheStormIsComing,” “#TheStormIsHere,” and "#TheStorm," are four examples of how TikTok is being used to circulate the QAnon conspiracy theory.

“Red October” refers to the 1990 movie The Hunt for Red October, which is widely referenced by the QAnon community, and “the storm” is a key phrase used by QAnon followers to describe the coming roundup of the president’s enemies. Both are used by QAnon supporters to refer to the supposed trial and execution of alleged deep state agents.

While the following hashtags are not exclusively used by QAnon followers, they enable many QAnon accounts on TikTok to openly spread conspiracy theories within their community and to recruit new followers on the platform. 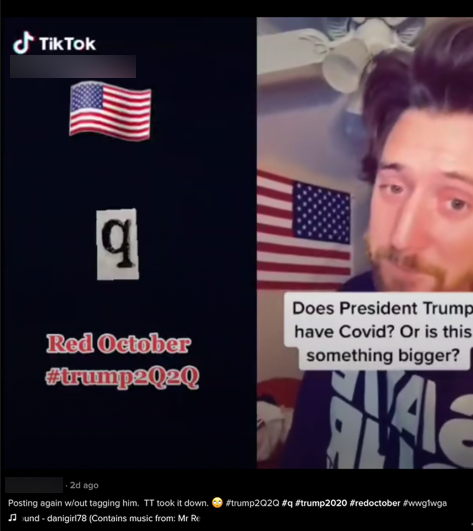 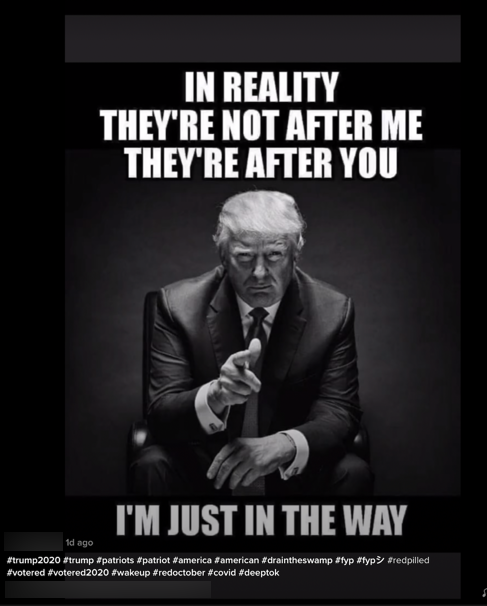 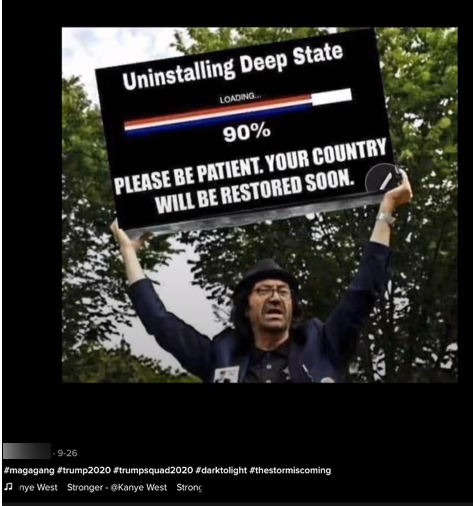 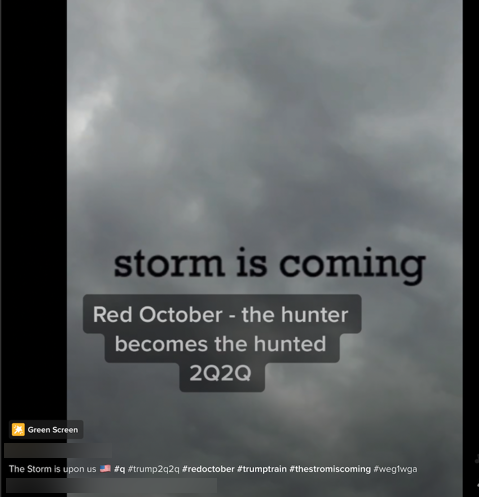 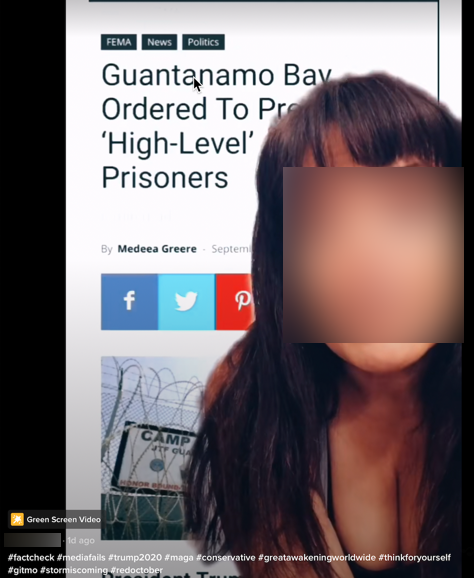 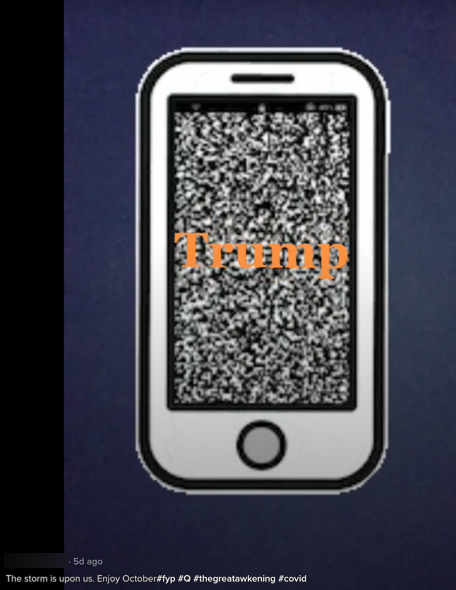 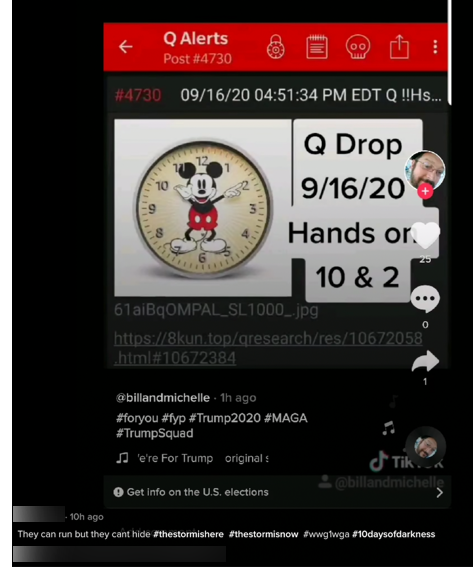 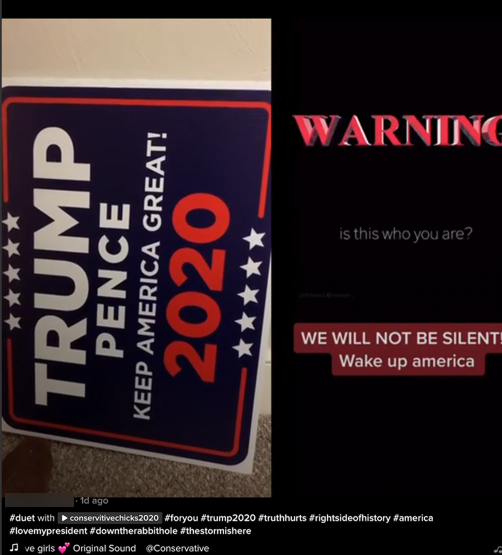 Other QAnon-affiliated hashtags provide more pathways for recruitment on TikTok

Other hashtags Media Matters identified are either slight variations of the original banned hashtag or are clearly QAnon-affiliated hashtags that have yet to be removed from the platform.

“#10DaysOfDarkness” is explicitly a QAnon-affiliated hashtag, referring to the period of time when Trump will execute members of the deep state and there will be a technology blackout. The hashtag has more than 106,000 views. 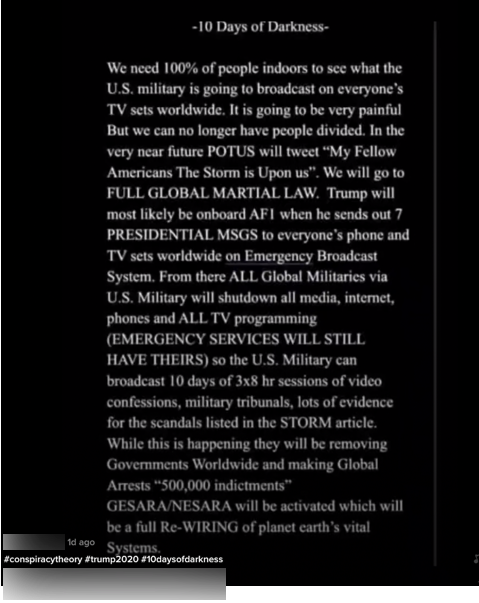 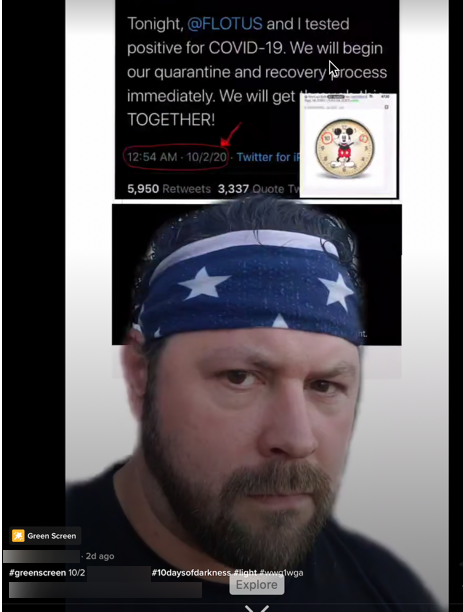 “#DeepState” is banned, but “#DeepStateIsReal” is not. That slight variation has more than 771,000 views.

TikTok’s community enforcement team should be responsible for identifying widespread QAnon misinformation, not journalists. Not only do the aforementioned videos and hashtags warrant removal, but TikTok must adopt proactive enforcement strategies to prevent the further spread of misinformation on its platform.

For example, the only effective restriction for the banned “#pizzagate” hashtag is that you cannot look up the hashtag in the platform’s search bar. But there is a workaround allowing TikTok users to click if it is tagged on a video and view similar content with the same hashtag. Similarly, if a user includes it in a caption it can be used to find the allegedly banned hashtag. The “#pizzagate” hashtag contains videos with over 102.5 million views.

Although removing these hashtags can help hamper the spread of specific misinformation about Trump’s COVID-19 diagnosis on TikTok, the continued spread of such conspiracy theories further proves that the platform needs to be proactive rather than reactive when it comes to addressing QAnon misinformation.

*This language has been updated for clarity