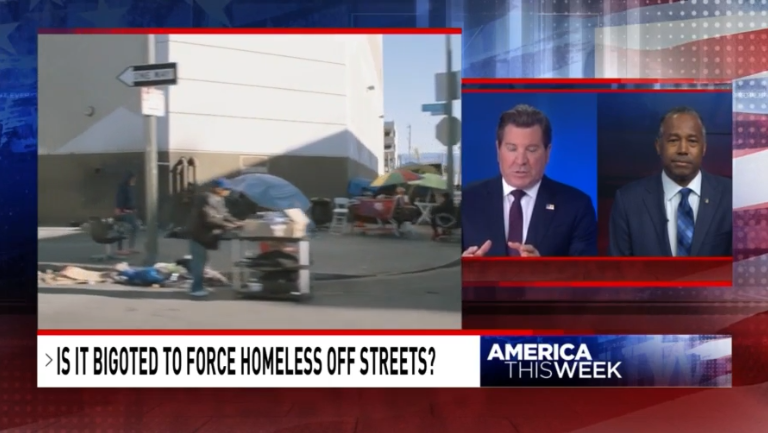 Conservative behemoth Sinclair Broadcast Group controls local news stations across the country, using public airwaves with the understanding that its programming will contribute to the public good. But one of its major national programs has repeatedly used the platform to scapegoat some of the most vulnerable people in local communities: those experiencing homelessness and extreme poverty.

On September 10, The Washington Post reported that President Donald Trump had “ordered White House officials to launch a sweeping effort to address homelessness in California,” potentially by using federal resources to remove people experiencing homelessness from streets and encampments and place them in “new government-backed facilities.” Days later, the Post reported that administration officials had toured an old Federal Aviation Administration facility in California “as they searched for a potential site to relocate homeless people,” even as questions remain about the legality of Trump’s proposal. One senior administration official told the Post, “We’re not rounding people up or anything yet.”

Right-wing media’s treatment of homelessness is reflected in this strategy, with both Fox News and Sinclair -- key outlets in the Trump administration’s echo chamber -- running fearmongering pieces about homelessness and using it to attack Democratic politicians.

Fox has been on a months-long campaign to fearmonger about people experiencing homelessness and housing insecurity, particularly as a way to attack Democratic mayors of major U.S. cities. Fox aired at least 53 segments about homelessness in California alone from May until the president’s plans were first reported in September. The network’s recent programming has dehumanized people experiencing homelessness by calling them “drugged-out zombies,” suggesting people might be carrying “bubonic plague,” and calling for “bulldoz[ing]” encampments where people live, and Fox’s coverage has cynically used these stories to fearmonger about progressive policies and socialism. (Though this recent trend may be an uptick, Fox News has been airing abhorrent segments about homelessness for years.)

Meanwhile, Sinclair has also been quietly broadcasting a series of hand-wringing reports about homelessness for months on one of its national programs, America This Week, hosted by former Fox News personality Eric Bolling. The show has aired multiple segments with irresponsible and dehumanizing reporting or discussion about homelessness.

Issues like homelessness and housing insecurity, health care, poverty, crime, addiction, and race -- which often intersect, especially in local stories -- ought to be covered responsibly. There are plenty of experts who have weighed in on how to do it, and the resource-starved local news industry writ large can and should do better. But when national programming fails in those respects -- and local stations are expected to air it regardless -- it can undermine any efforts by local journalists to cover homelessness and housing insecurity with compassion and accuracy.

Bolling’s show, which streams weekly on all Sinclair station websites and airs in weekend time slots on many Sinclair news stations, has repeatedly elevated problematic local reporting about homelessness from across the country, as well as commentary from Bolling (who is a known bigot and conspiracy theorist, among other things).

When he’s not gifting a member of the Trump administration with a friendly interview, delivering strange monologues about what is and isn’t racist, or hosting the worst of the worst right-wing media grifters and conspiracy theorists, Bolling makes some time to discuss (in largely unhelpful ways) policies that actually matter to local news viewers. Since the show debuted in April, at least six of 26 total episodes have included a segment with discussion of homelessness in major cities.

On August 21, Bolling began a multitopic panel discussion by asking his guests if we ought to “blame liberalism” for tent cities in Los Angeles and homelessness, drugs, and “a lot of things going on” in Seattle. Bolling then repeatedly talked over liberal panelist Jason Nichols as he attempted to respond, shouting about “liberal mayors.” Bolling ended the discussion by arguing that “we’re becoming soft” and “worried about people’s feelings” because police forces aren’t forcibly pushing people off the streets, declaring, “You’re ruining businesses. You’re ruining neighborhoods.”

On the August 28 edition, Bolling interviewed Housing and Urban Development Secretary Ben Carson and the two discussed the “homeless problem” in cities on the West Coast. In the six-minute exchange, Bolling asking several leading questions clearly meant to shift blame onto Democratic mayors of large West Coast cities like Los Angeles, Seattle, and Portland. B-roll footage of makeshift encampments and people sitting or lying down on sidewalks was displayed throughout the interview. Bolling asked Carson if it was “racist and/or bigoted to force homeless people off the streets so businesses can do business and neighborhoods can be neighborhoods again, rather than having poop patrols in Seattle and people using needles on the sidewalk? Is that racist to push them into homeless shelters?” Carson replied, “Oh, well, of course it’s not. You know, we throw around those terms very loosely.”

On April 10 -- only the second edition of his new show -- Bolling aired an interview with local reporter Matt Markovich from Seattle Sinclair station KOMO. Markovich had recently produced a widely criticized local special on homelessness, ominously titled “Seattle Is Dying.” Among other issues, the special repeatedly used dehumanizing language about the people it was covering (e.g., “wretched souls,” “living like animals”) and featured substantial potentially exploitative footage of people who were “never spoken to on camera” but, in at least one case, incorrectly “assumed to be homeless.” Bolling showed a brief clip from the special and asked leading questions of Markovich to cast blame on liberal city leadership in Seattle and New York City.

On July 24, Bolling’s show featured another local news package about homelessness from Markovich, this time focused on San Francisco. The package used repeated sound bites and B-roll footage to connect homelessness to the illicit drug trade while also showing human feces and piles of trash on the streets. It did include some discussion from advocates for people experiencing homeless, but very little context on the proposed policies to help.

On July 3, the show aired a local news package from Austin, Texas, station KEYE speculating about a new city ordinance that allows people to stay and set up tents on public sidewalks. The package focused almost solely on potential downsides for local businesses, featuring an interview with one local business owner who said, “Homeless tents in, you know, our store display is not the kind of theme we’re going for,” and another interview with a person shopping who said she would come back later if she saw “homeless around” a store. The segment also included a sound bite from the local assistant police chief seemingly lamenting the challenge for police, saying, “It’s tough to look at the conditions they’re in and to really point to something that’s endangering anyone’s health or safety in a manner that an officer could swear to in an affidavit and go before a judge and defend in a court case.”

On September 4, the show featured another local news package from KEYE about the ordinance. The segment again featured an interview with a (different) local business owner complaining about the change and suggested the move was compromising public safety. Bolling followed up with some questions for the reporter about support for “these town council members that decided to allow homeless people to sleep on the street,” asking, “What about the people? What do they say? They’re OK with this?”

Sinclair also recently aired a pair of “must-run” commentary segments on homelessness from liberal commentator Ameshia Cross and chief political commentator Boris Epshteyn, a Trump loyalist. Epshteyn’s take specifically called out Democratic leaders in California and argued, “Homelessness is another problem that Democrats want to blindly throw money at.” Cross’ segment focused on affordable housing policy. Both segments aired on Sinclair stations across the country on June 27 and 28.

The must-run segments and Bolling’s weekly show typically air on Sinclair-controlled news stations nationwide, including in targeted cities like Austin, Seattle, Portland, and in smaller cities in California. (Sinclair does not currently own or operate any stations in Los Angeles or San Francisco.)