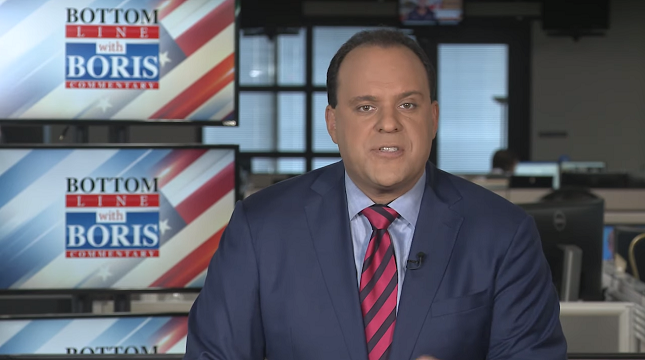 Conservative local news giant Sinclair Broadcast Group has a new conservative “must-run” commentary segment addressing how to “solve the mass shooting problem” in America -- and it doesn’t include any discussion of actual gun violence prevention measures, or even mention the word “gun.”

Chief political commentator Boris Epshteyn produces near-daily commentary segments that Sinclair requires its local TV news stations across the country to air. His segments typically focus on agreeing with President Donald Trump on a given issue or defending Trump from criticism, often in ridiculous and obvious ways.

Epshteyn’s latest segment attempted to address a pair of deadly public mass shootings in El Paso, TX, and Dayton, OH, this past weekend. Epshteyn lamented that “our country has decided that it is no longer interested in asking itself how to solve the mass shooting problem,” but the segment does not make any attempt to tackle the issue seriously. Aside from a cursory mention of being “policy-wise, ... somewhere in the middle” and vaguely invoking “mental health,” Epshteyn mentioned no actual solutions he supports.

Instead, he lectured people for placing blame on Republicans or the president for encouraging -- and themselves using -- the racist, anti-immigrant rhetoric and ideas invoked by the El Paso shooter. (In fact, Epshteyn has previously employed similar rhetoric himself, warning of “an attempted invasion of our country” in a November 2018 segment defending the tear-gassing of migrant families at the U.S.-Mexico border.)

According to the iQ media database, the segment has so far aired on at least 33 stations in 28 states and D.C. -- including in parts of Texas and Ohio. In Dayton, Sinclair controls both WKEF (ABC 22) and WRGT (Fox 45), branded together as “Dayton 24/7 Now.” In El Paso, Sinclair owns and operates both KDBC (CBS 4) and KFOX (KFOX 14). The segment does not appear to have aired on these stations as of publication.

Local Sinclair stations typically air both Epshteyn’s segment and a more liberal segment on the same topic within the same newscast. The liberal segment about the El Paso and Dayton shootings, hosted by commentator Ameshia Cross, explicitly calls for leaders to address “domestic terrorism, extreme rhetoric, and gun violence.”

Update (8/7/19): This piece has been updated with additional information.