Back in December, when President Donald Trump signed into law changes in U.S. tax policy, Fox News helped Republicans spin the discussion surrounding the legislation by hyping anecdotal reports of bonuses, wage hikes, and investments. Now that Republicans are aiming to make the individual tax cuts permanent, Fox is at it again -- despite analyses showing how staggeringly disproportionate the benefits are for the wealthy and large businesses, that they barely lower tax burdens for some middle class and lower income families, and that they have had no noticeable positive effect on the economy.

The law, officially titled the Tax Cuts and Jobs Act (TCJA), passed in December, and Fox hosts celebrated the legislation’s passage after contributing their own dishonest coverage. Fox News shows repeatedly focused on announcements of bonuses -- such as some AT&T workers receiving a $1,000 bonus their union already negotiated -- and small wage increases from some companies to portray the tax cuts as beneficial for ordinary working Americans.

Others, including Fox’s Sean Hannity, claimed that the tax legislation would lead to increased investment by corporations, in some cases pointing to anecdotal examples of businesses announcing investments and saying they were possible because of the policy change. Two days after the legislation’s passage, Fox & Friends invited White House special adviser Ivanka Trump on to hype an increase to the Child Tax Credit in the legislation. (According to tax experts, “the expanded child credit will actually provide little relief for some of the lowest-income families.”)

Republicans are now attempting to pass another tax bill, in part to make permanent the individual tax policy changes in the original law, which expire within 10 years. The White House is portraying a report that House Republicans are planning to advance a bill as “a big win for the middle class.” And Fox News is again helping Republicans with their spin. On July 18, Fox & Friends hosted Rep. Kevin Brady (R-TX), chairman of the House Ways and Means Committee -- the committee the bill would originate from -- who said lawmakers should make permanent “those cuts for middle-class families.” Later on the show, Fox Business host Stuart Varney said: “I think Republicans are setting a tax trap for the Democrats. … Are the Democrats going to vote against something which really supports America's middle class?”

But as reporting from NPR and experts from the Economic Policy Institute (EPI) and the Center on Budget and Policy Priorities (CBPP) have explained, Trump’s tax cuts provide only minor benefits to the middle class, are geared toward the wealthiest Americans, and are having no noticeable positive effect on the economy.

NPR: Tax cut benefits to middle class are meager compared to those affecting the wealthy. NPR cited a December report from the nonpartisan Tax Policy Center which showed that middle-class households are receiving meager tax benefits from the Trump tax cuts compared to the wealthiest households and that when those benefits expire, middle-class households will earn slightly less income than they did before the tax cuts were passed: 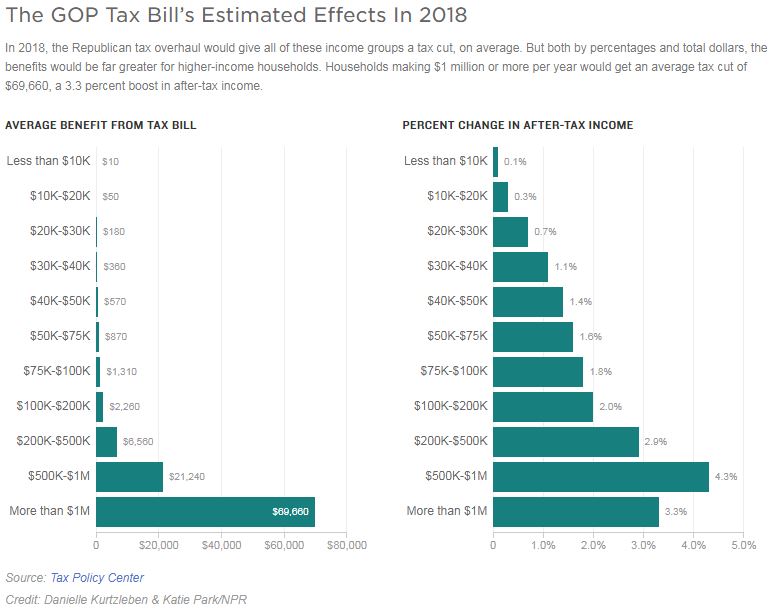 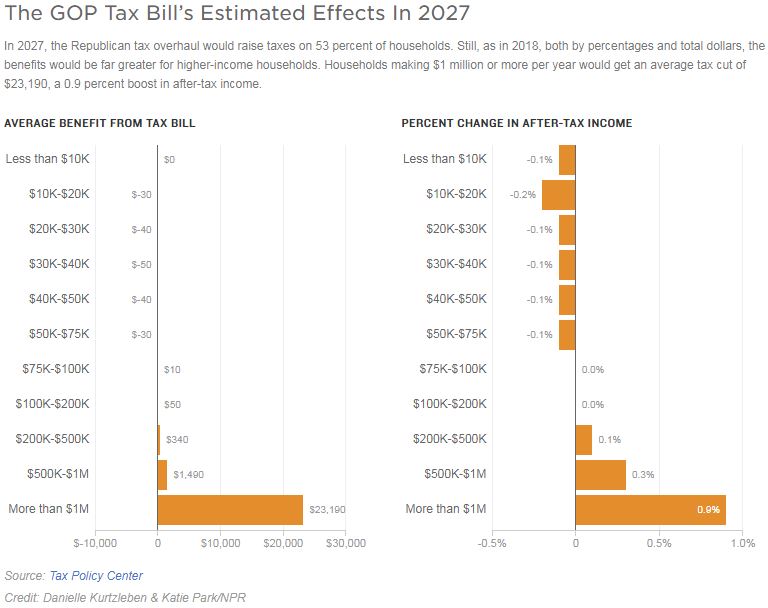 EPI: Republican spin of tax cuts as primarily middle-class benefits “is false.” A blog post by EPI budget analyst Hunter Blair showed that Republican lawmakers’ attempted spin of the Trump tax cuts as targeted to the middle class “is false.” The post showed that the bottom 80 percent of taxpayers earn a disproportionately small benefit from the policy change, with the top 5 percent earning a larger share of the benefits relative to their income: 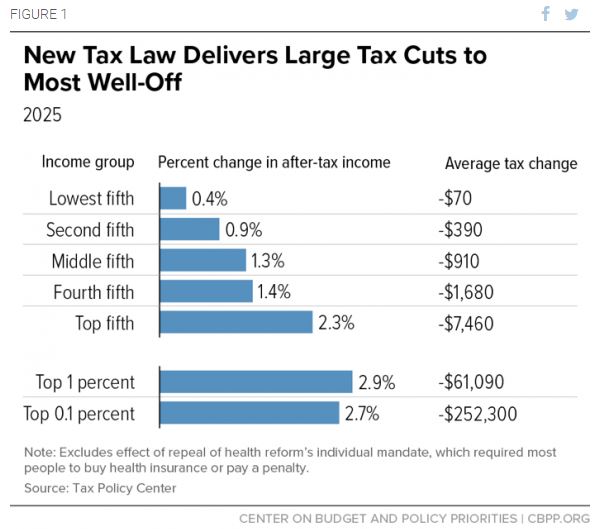 CBPP: Increase in Child Tax Credit skews toward the wealthy. The CBPP report explained that “10 million children under age 17 in low-income working families will receive no CTC increase or a token increase of $75 or less.” Further, the law increased the upper limit for the Child Tax Credit from $110,000 in income annually to $400,000, with the wealthiest getting an increase worth several times more than the increase middle-class families will receive: 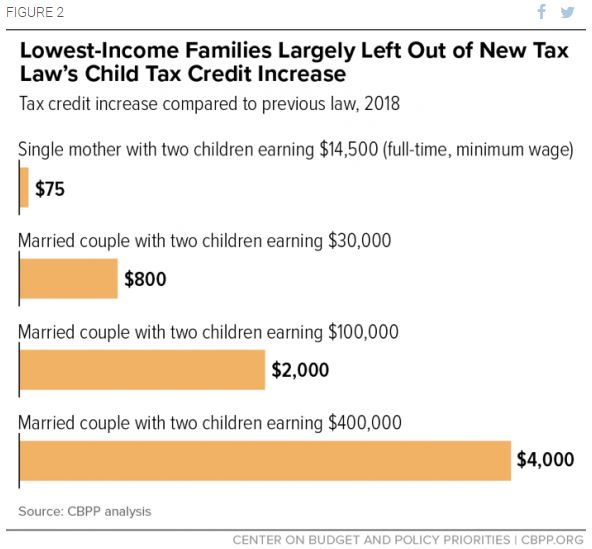 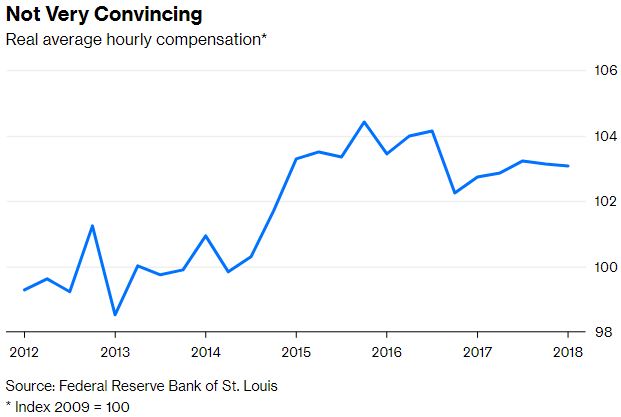 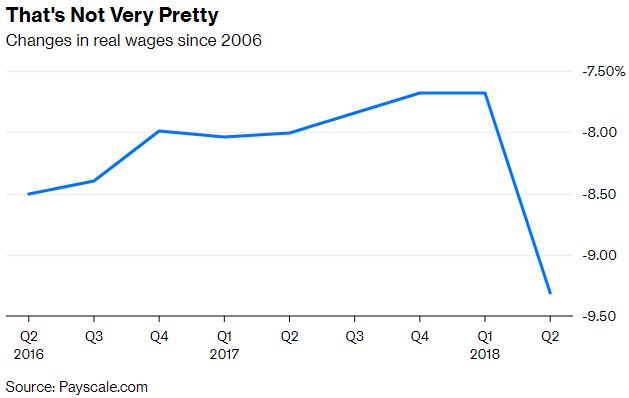 EPI: Bonuses were overhyped, and they are less likely to occur in future years. EPI’s testimony explained that “nearly 40 percent of American workers get bonuses every year,” and that there was a financial incentive to give bonuses after the law’s passage at the end of 2017 when such bumps could be less expensively written off on corporate tax filings. As EPI explained: “What this means is that even if some increase in bonuses occurred in 2017 because of the TCJA (this remains a big ‘if’), there is no reason to think such bonuses will recur in the future.” [Economic Policy Institute, 6/1/18]

EPI: “There is no serious evidence that the TCJA spurred a notable pickup in business investment.” EPI’s testimony showed that business investment has grown less than it did in either 2011 or 2014. “In short, we do not yet have economy-wide data showing a rapid upsurge of investment due to the TCJA.”