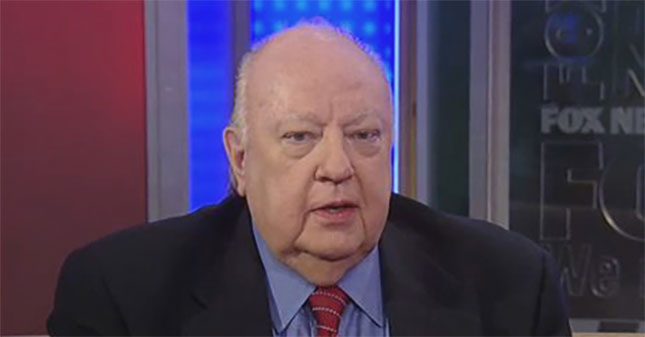 That’s how Fox News’ Ainsley Earhardt addressed the death of former Fox CEO Roger Ailes on Fox & Friends this morning. A few hours later, Fox News’ Happening Now co-anchor Jon Scott similarly said of Ailes, “Yes, he had his faults. We all do.” The “sins” and “faults” they’re referring to -- the ones “we all have” -- include Ailes’ serial sexual harassment of Fox News employees spanning decades. They also include the creation of a culture, on and off the air, that repeatedly told women that their bodies were not their own, but rather are subject to the sometimes-violent whims of men.

Roger Ailes hurt women. A lot of women -- probably more than we know. And if those facts are lost in praise about the ways Ailes “forever changed the political and the media landscape,” or reduced to “kind of a sad ending to an incredible career,” it will be another message that those women don’t matter.

In addition to the incalculable damage Ailes' signature creation has done to the political landscape in this country, his real legacy is the pain he caused for countless people: the 25 women who reported his sexual misconduct and harassment, the employees who were silenced or surveilled by Ailes and his cronies, the women and black employees who were serially harassed by others under Ailes’ watch, the surely many more Fox employees who went to work every day scared, the viewers who watched harassers deliver the news each day with Ailes’ stamp of approval, and the survivors who hear the stories about Ailes’ serial harassment and are reminded of their own pain.

These are not “sins” that we all have committed; these are atrocities.

Ailes’ real legacy is the message that if you’re a wealthy, powerful white man, you can hurt as many people as you want and probably get away with it. You can do it for decades, building up an environment where no one even talks about the pain you cause. And when women speak up, you can spy on them, dismiss them, and harass them.

And when people listen to those women despite your best efforts to stop them, you can walk away with a “tarnished legacy” and an extra $40 million.