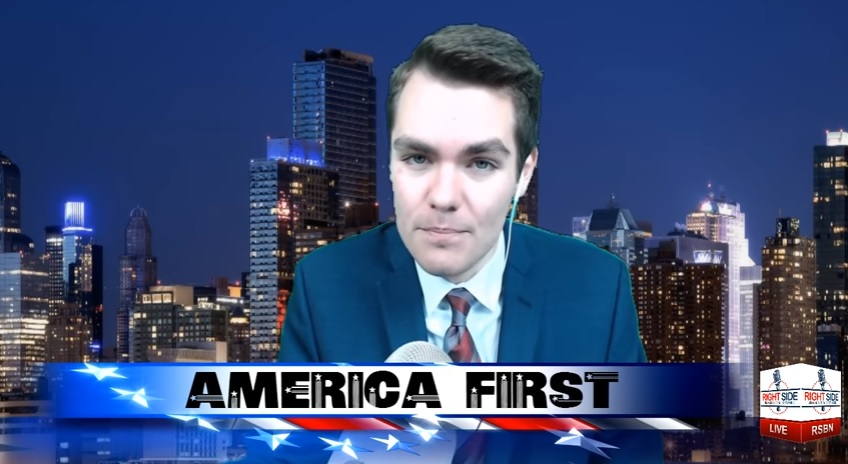 Right Side Broadcasting Network and host Nicholas Fuentes, who has gained infamy for participating in the recent white supremacist rally in Charlottesville, VA, have parted ways in a “mutual decision.” Fuentes hailed the rally as a “victory” that showcased “white identity” and brought attention to the “cultural genocide … against white America.”

Right Side Broadcasting Network (RSBN) is an online outlet that found success during the 2016 campaign by providing live streams of Donald Trump’s rallies. Following Trump’s victory, as Politico Magazine noted, the Alabama-based company attempted to “transform itself from a small live-stream operation into a major and diverse digital media outlet” with the goal of becoming a “24/7 news outlet of the common man.”

But RSBN has run into a series of problems due to "steep revenue declines" and toxic comments made by its staff. It has also struggled to find viewership for its original streaming programs. In recent months, RSBN has cut programs hosted by right-wing troll Mike Cernovich, YouTube prankster Joey Saladino (also known as “Joey Salads”), and conservative blogger Wayne Dupree. The Washington Post reported in July that its “staff of 12 is down to four” and that founder Joe Seales “said he has been propping up Right Side Broadcasting with money from his own pocket.”

Nicholas Fuentes is a college student who had hosted the pro-Trump program America First for RSBN. In April, he falsely claimed that Muslims and immigrants are not protected under the First Amendment and called for the people who run CNN to be “arrested and deported or hanged” (the network later apologized).

Fuentes -- who says he is “25 percent Mexican” -- posted online the day of the rally that “a tidal wave of white identity is coming.” He also tweeted that “Charlottesville was a victory if only for bringing attention to the cultural genocide being committed nationwide against white America.” He told The Boston Globe that the “blood”  of anti-racism activist Heather Heyer, killed by a neo-Nazi protester in Charlottesville, “is on the hands of the alt-left,” and he also “denied being a white nationalist or a racist, and said he rejects Nazism.”

Network CEO Joe Seales told Media Matters in an email that “we are no longer running his show as of right after Charlottesville.” He added that the parting was “honestly a mutual decision based on both of our interests- we brought the issue up of Charlottesville being a huge distraction and not falling in line with some of our core beliefs- and ultimately all of us decided was best we ended the show. We believe Nick is very talented and wish him well.” RSBN last aired his show on August 11, according to its YouTube page.

Fuentes tweeted over the weekend that he is “officially leaving America First on @RSBNetwork to pursue my own independent venture.” He added: “Much love to RSB family - they took a chance on me & went above & beyond to support my show. I wish the Seales family the best! God bless!”

Fuentes also recently stated that he would leave Boston University, where he's been a student, because he “didn’t feel safe” and instead would attend Auburn University. He was reportedly admitted to Auburn for the fall 2017 semester but “did not confirm his enrollment” and "will have to specifically apply for the spring semester” if he wants to attempt to attend the school (paragraph updated to reflect AL.com’s revised report about Fuentes and Auburn).