YouTube is regularly used by followers of the QAnon conspiracy theory as a platform to radicalize new members and widely share misinformation. But during a recent interview on CNN, YouTube CEO Susan Wojcicki refused to commit to more broadly banning QAnon content from the platform, claiming instead that the company has removed “a lot of it” already. In investigating YouTube’s enforcement claim, Media Matters has identified 17 large QAnon YouTube channels with over 4.7 million subscribers combined containing videos that explicitly violate the platform’s existing terms of use.

As first reported by CNN, Wojcicki talked up YouTube’s removal of QAnon videos without giving many specifics. “We also have already removed a lot of it, in terms of hundreds of thousands of videos because it could violate other parts of our policies: hate, harassment, COVID information,” she said. “There's been quite a lot of videos that have been taken down or the views have been reduced."

When asked why there was resistance to outright banning QAnon content on YouTube, Wojcicki replied: “I think with every policy, it has to be defined very clearly. Like what does that exactly mean, a QAnon group exactly?”

The channels we defined as “QAnon channels” support and peddle claims consistent with the QAnon conspiracy theory to millions of users. Media Matters identified the channels below by searching common QAnon terminology such as “WWG1WGA” (a QAnon slogan meaning “Where We Go One, We Go All”), “Red October,” “the storm,” or simply “QAnon.” (“Red October” and “the storm” both refer to the central QAnon prediction that President Donald Trump will be ordering mass arrests of his political enemies, members of the so-called “deep state,” who will then stand trial and face execution for treason and other supposed crimes.)

YouTube’s hesitation to quickly condemn QAnon and remove content affiliated with the conspiracy theory should not be overlooked. For years, the company has enabled QAnon content creators to radicalize other users and spread misinformation campaigns. The FBI even classified QAnon as a domestic terrorist threat last year following several arrests and incidents of violence, so there is no room for YouTube to deny that the conspiracy theory is dangerous.

Of the 17 QAnon YouTube channels identified by Media Matters, many appear to contain multiple examples of misinformation that explicitly violates YouTube’s community guidelines by circulating false and misleading claims about the election, mail-in voting, the coronavirus pandemic, and more. Other YouTube videos from some of the QAnon channels shown below even appear to promote violence. These 17 channels combined have more than 4.7 million subscribers. 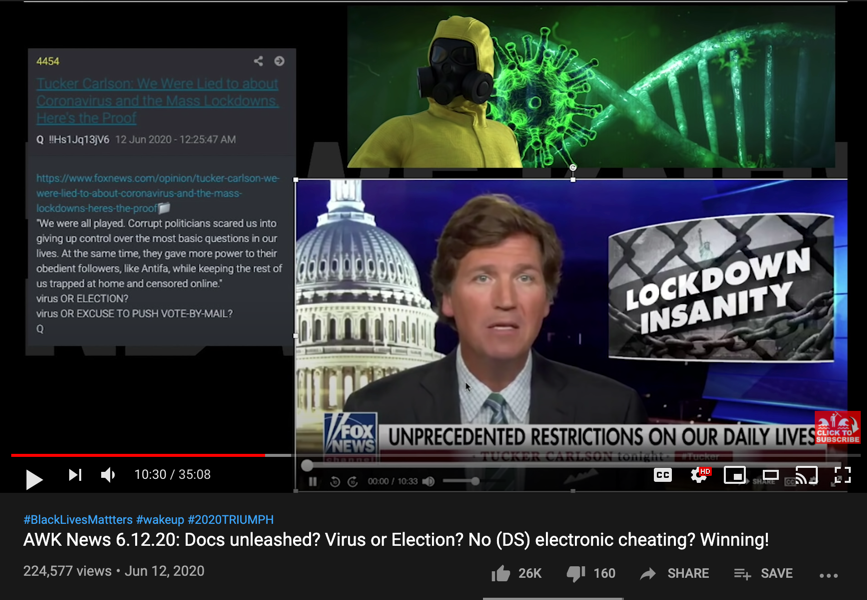 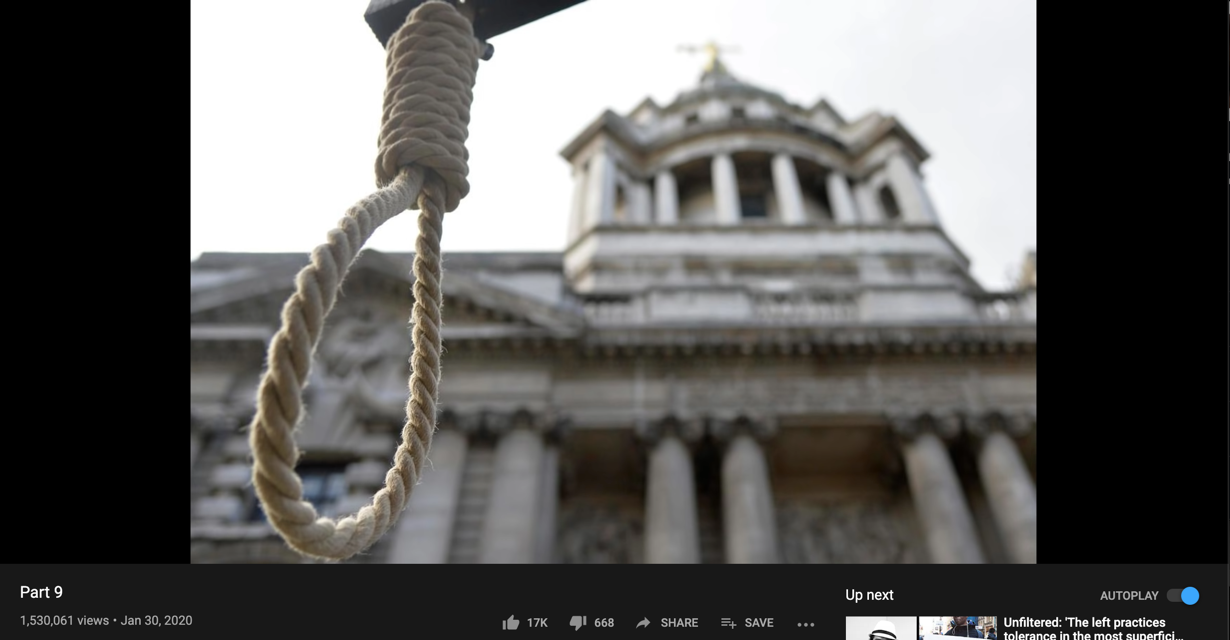 This video suggests that the Clintons and former President Barack Obama should be hanged for committing “high treason.” The details of their supposed crimes are outlined throughout the channel’s 10-part “fall of the cabal” misinformation series. 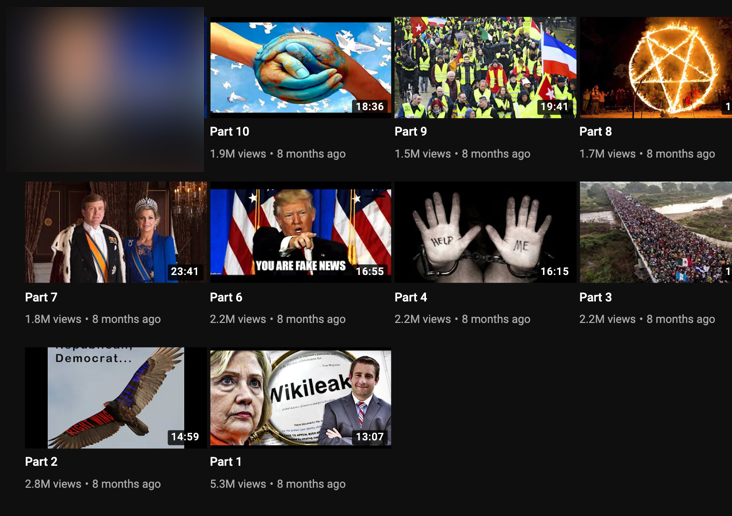 At least one of the videos in the series is currently monetized, meaning that YouTube and the channel earn ad revenue for spreading the QAnon conspiracy theory. 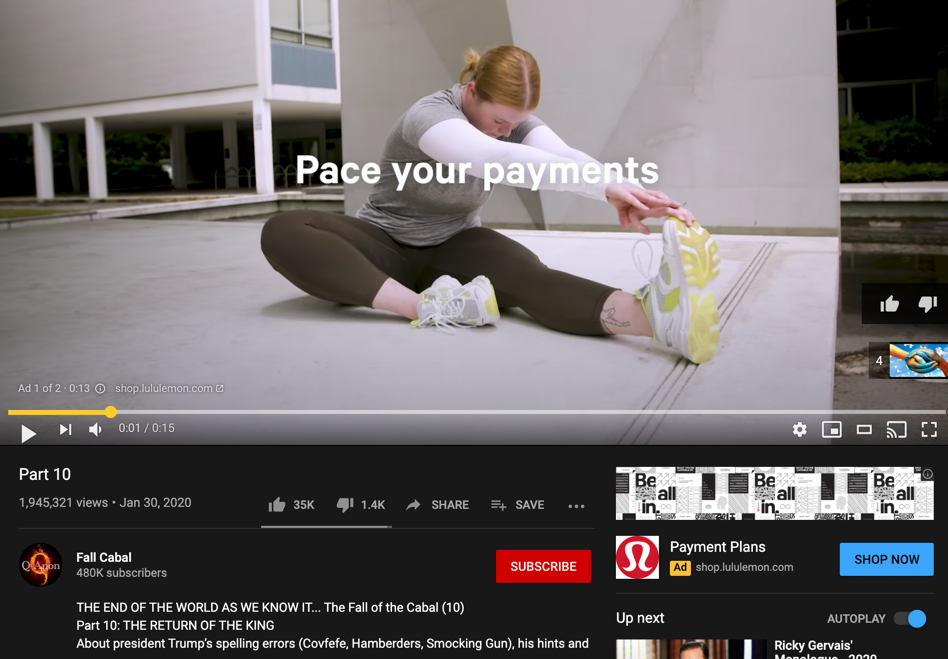 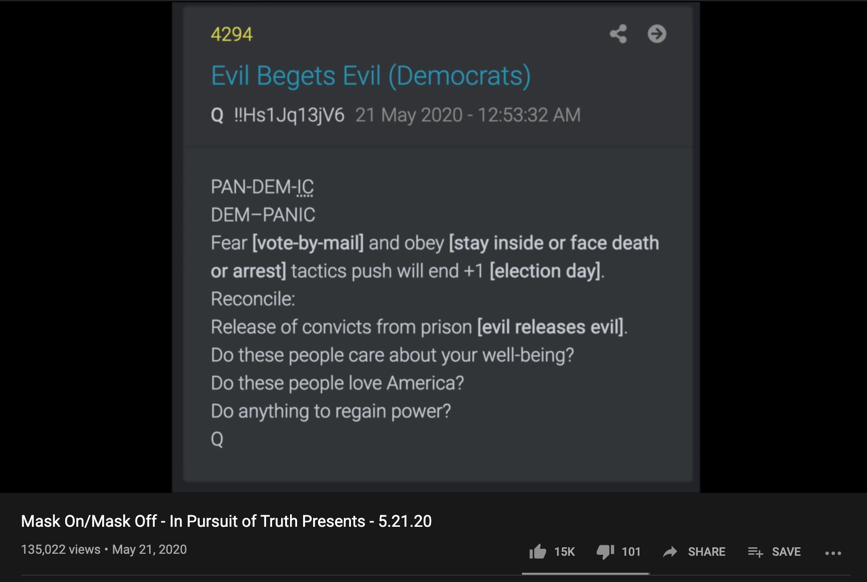 Specifically, this video falsely claiming that former first lady Michelle Obama is a trans woman appears to violate YouTube’s hate speech policy by promoting “hatred against individuals or groups based on ... gender identity and expression.” 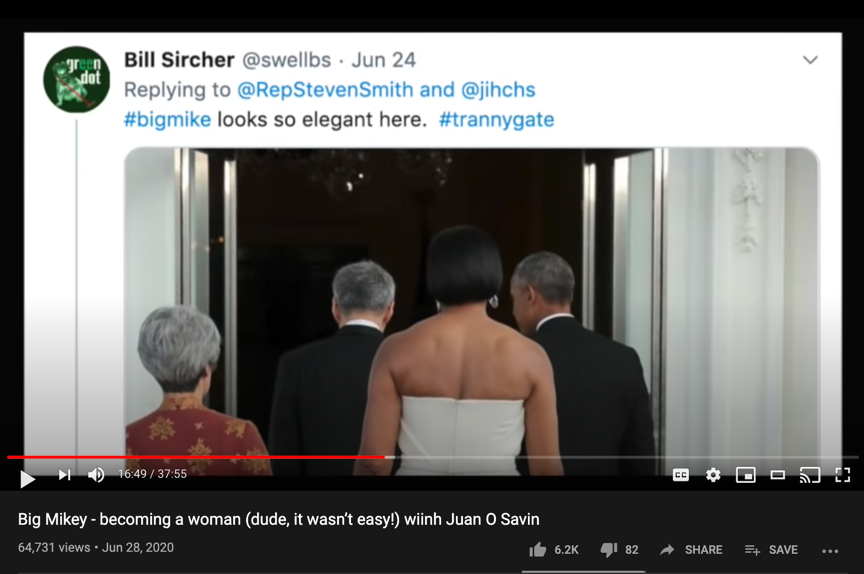 This video is part of Crokin’s five-part COVID-19 misinformation series on YouTube. 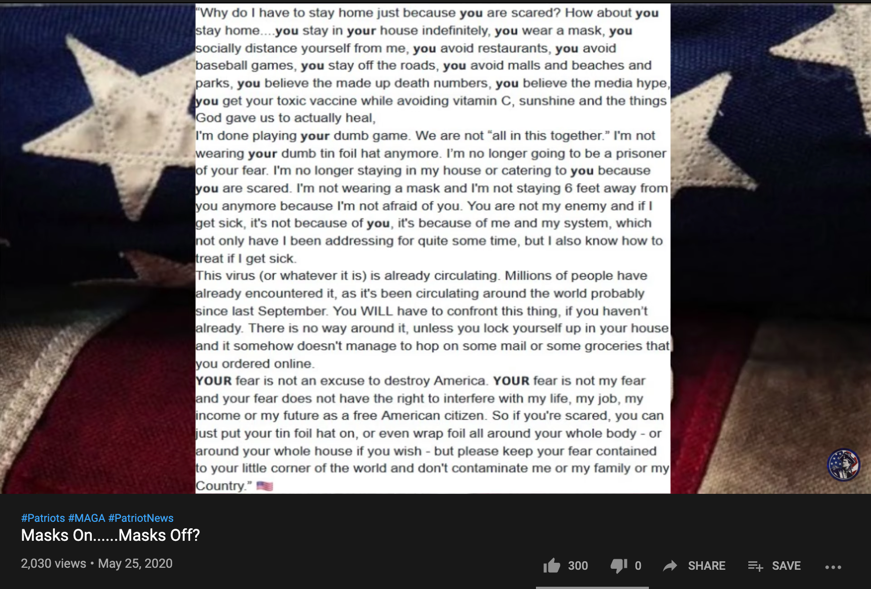 This mail-in voting fraud story originated from a right-wing hoax outlet, Project Veritas, claiming to expose liberal corruption with a deceptively edited video. The story was found to be decidedly false. 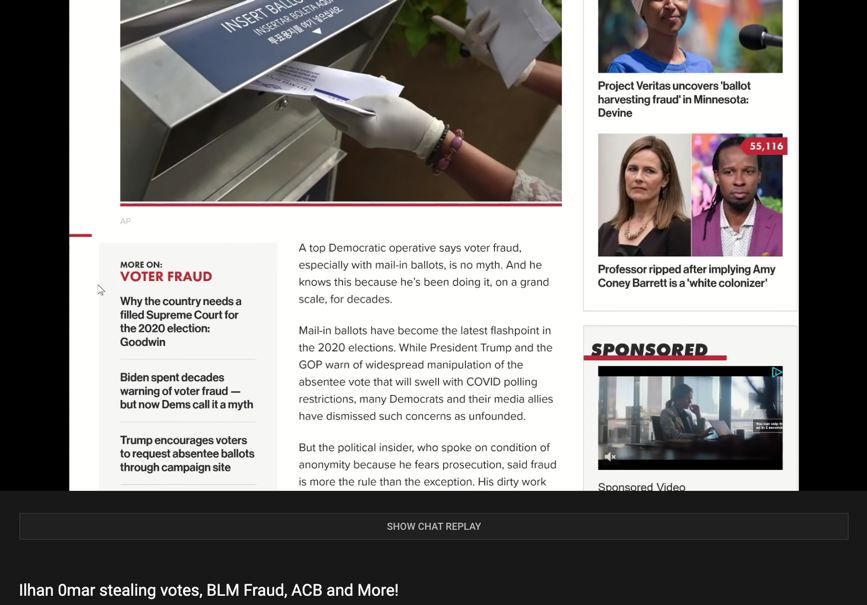 This video pushes the use of hydroxychloroquine and claims that the “deep state” wants mail-in voting because it will lead to voter fraud. 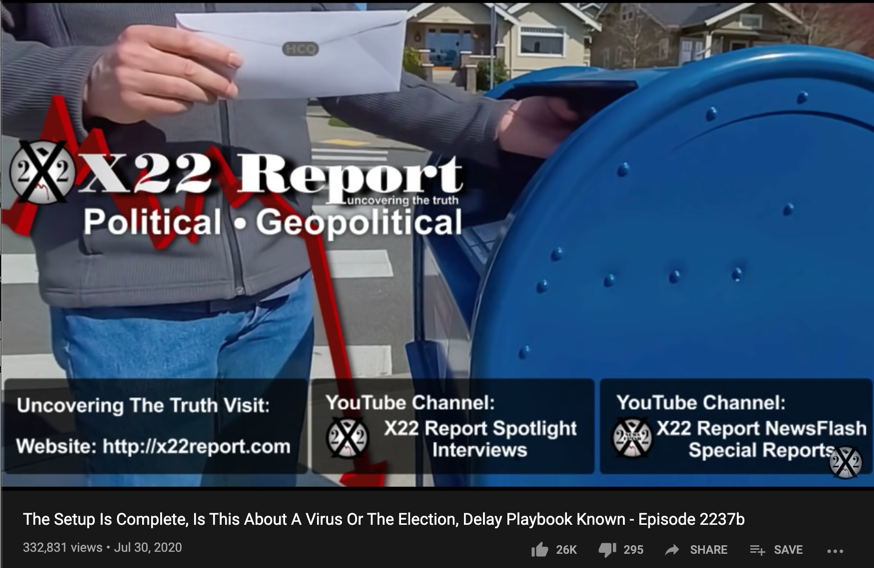 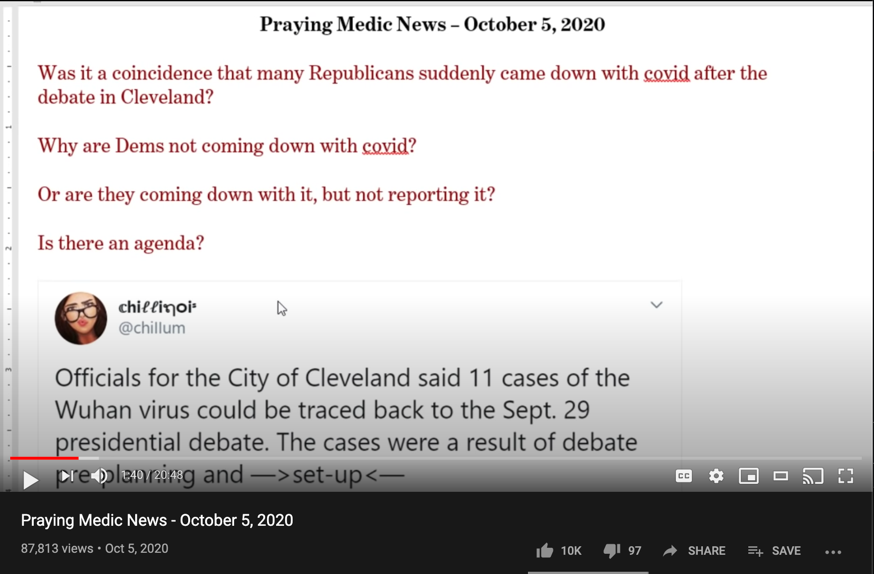 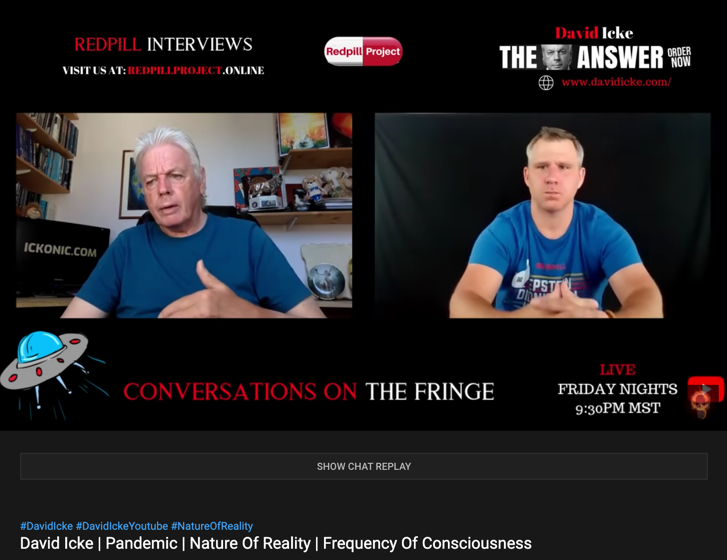 In the video, infamous conspiracy theorist David Icke claims that “there is no virus” and describes COVID-19 as the “pandemic hoax”; in fact, Icke was the original reason why YouTube cracked down on the 5G conspiracy theory.

This video appears to violate YouTube’s policy by promoting “Red October,” a reference to the 1990 movie The Hunt for Red October which is widely used by QAnon supporters to describe the supposed coming roundup and mass executions of the president’s enemies. Commenters in the video’s live chat even refer to supposed deep state officials as “scum” and “animals,” with one user suggesting that “you hunt predators from a helicopter with an AR10” rifle. 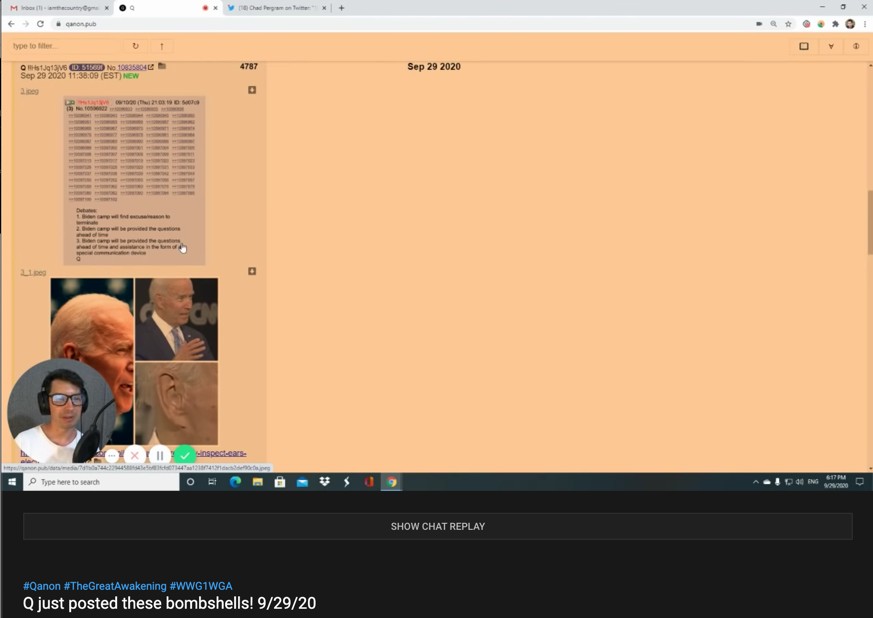 In this video, the host reads a “Q drop” -- a post made to an online message board by “Q,” the central figure in the QAnon conspiracy theory -- claiming that Democratic nominee Joe Biden received debate help in the form of “a special communication device” and then elaborates by saying that Biden was wearing a “flesh-colored earpiece.” This false conspiracy theory spread widely on YouTube following the first presidential debate. 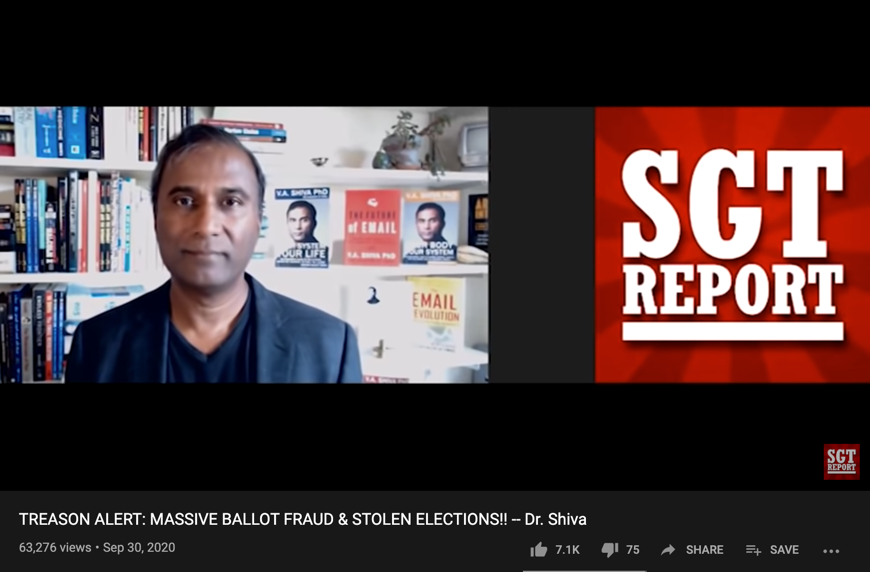 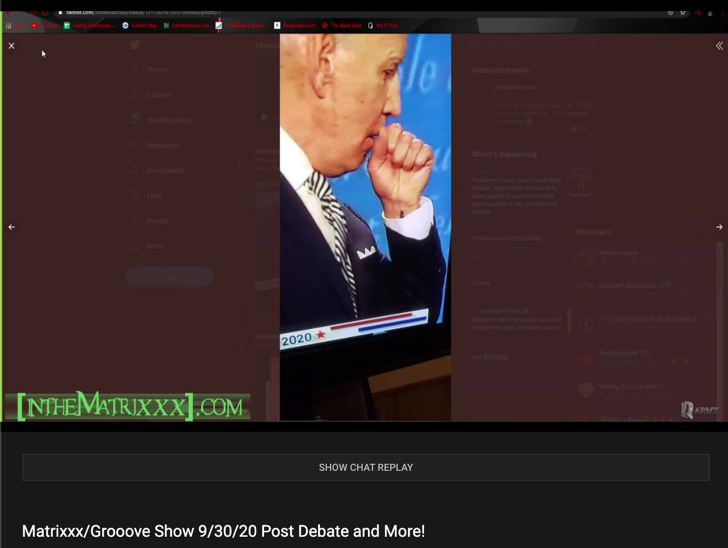 In the September 30 video, the host says Biden was “wearing a wire” to cheat during the debate, an entirely unfounded conspiracy theory that went viral after the first presidential debate.

This video claims that mail-in voting is used by Democrats to commit voter fraud. 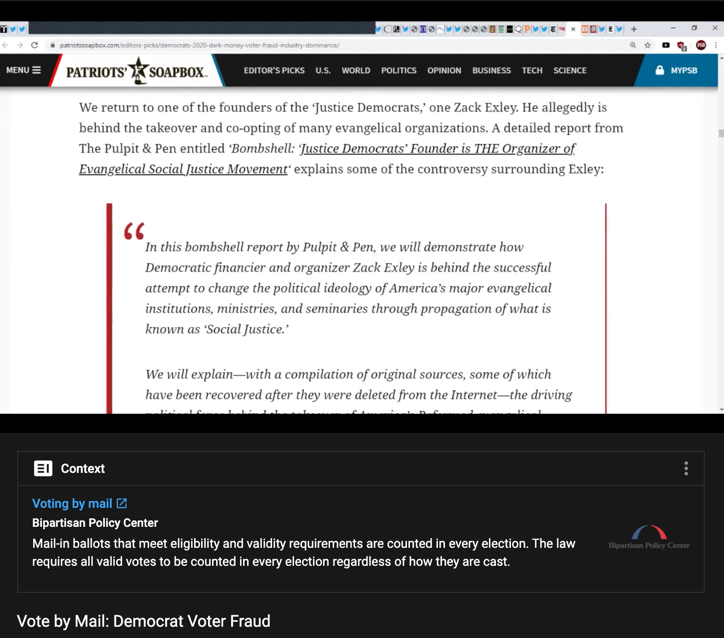