In response to the president’s announcement, supporters of the dangerous, anti-Semitic QAnon conspiracy theory have been claiming that Trump's diagnosis was a ruse to cover up that he was actually preparing to arrest and execute members of the purported “deep state.” For evidence of this claim, they reference a September “Q drop“ of a Mickey Mouse clock with hands pointing to 10 and 2, connecting it to Trump because he tweeted about contracting coronavirus on October 2, or 10/2. (“Q drops” are messages or clues to QAnon followers posted on an internet message board supposedly from the central figure of the conspiracy theory, known as “Q.”) Supposedly, this image proves that falsely claiming to have contracted COVID-19 was part Trump’s plan all along and had been predicted by Q weeks prior. QAnon supporters have also pointed to other supposed messages from Q as further evidence. 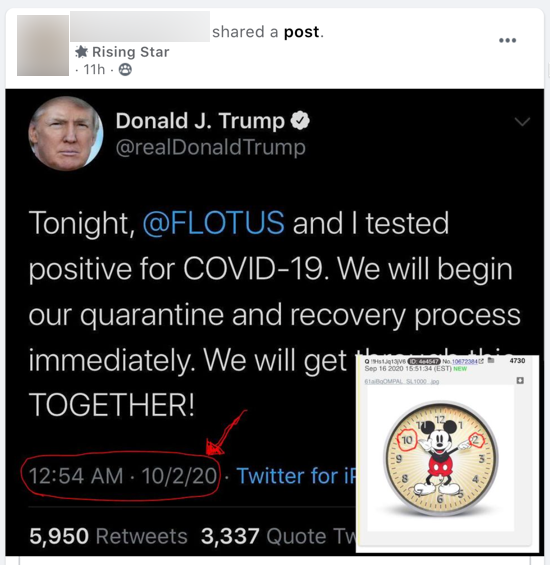 QAnon supporters claim that pretending to have the coronavirus is actually part of Trump’s plan to finally take down his enemies, and they have since declared this the beginning of “Red October” (a reference to the 1990 movie The Hunt for Red October mentioned in previous “Q” posts) or “the storm,” a key phrase related to the conspiracy theory.

As a result, memes circulating in many QAnon groups depict Trump as a hunter alongside images based on the film: “The President is luring his enemies in, giving them a false sense of hope, exposing them even more as they wish for his death on social media, and now he can focus on Twitter like never before, communicating directly to the people. Red October has begun!” 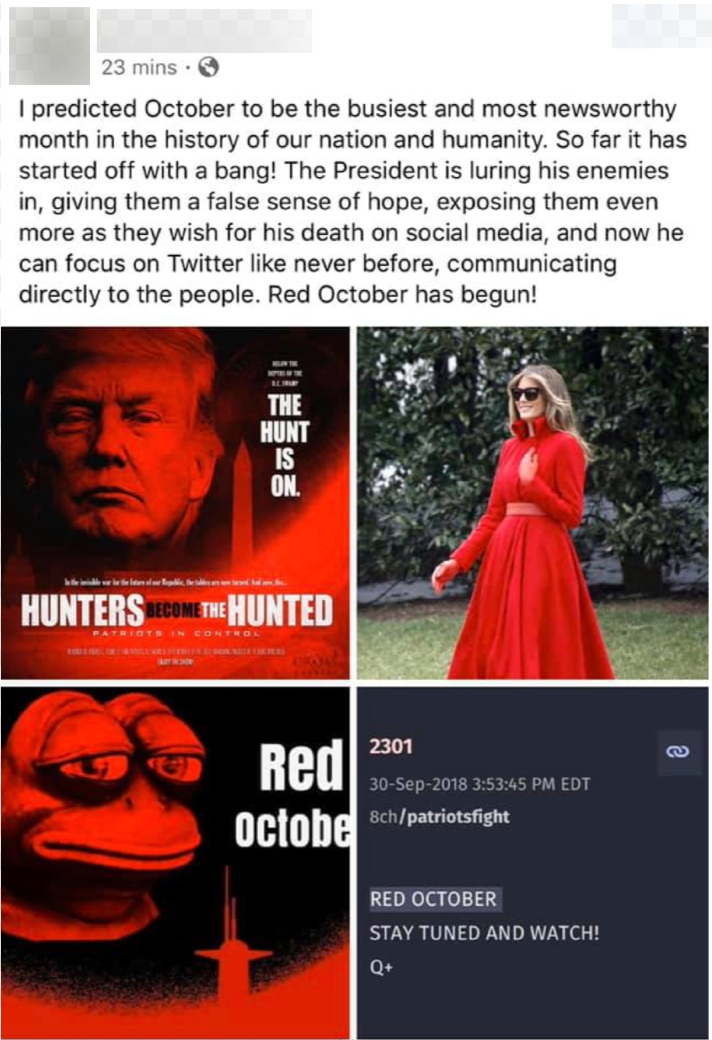 Promises of a “storm” are circulating in these Facebook communities and beyond following Trump’s diagnosis. In one example, an image of a thunderstorm was posted in a QAnon Facebook group discussing the president’s announcement with the caption “get ready for the show.” CJTRUTH, a QAnon Twitter account with over 207,000 followers, tweeted: 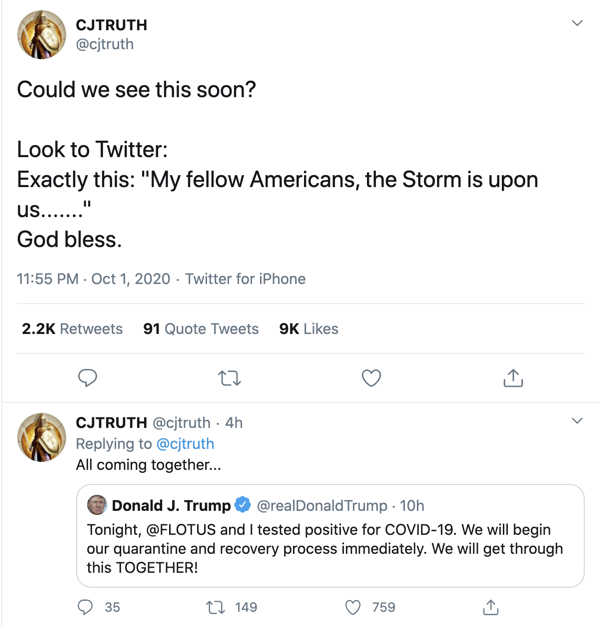 In addition to these conspiracy theories favored by QAnon followers, some others in far-right circles have also pushed the idea that “the left” intentionally gave Trump the virus. DeAnna Lorraine Tesoriero, a QAnon-supporting former congressional candidate turned Infowars host, earned thousands of retweets by baselessly suggesting the president was infected through intentional contamination of the microphones and podiums at the first debate, adding: “I put nothing past the left. NOTHING.” And on TheDonald.win, the site for the now-banned subreddit “r/The_Donald,” a user received many “upvotes” for suggesting “they infected him at the first debate,” calling it “a hell of an october surprise by the deep state.”