A Project Veritas video featuring a so-called “whistleblower” who makes false attacks on the safety and effectiveness of coronavirus vaccines has spread on multiple social media platforms, getting millions of views despite rules on these platforms against anti-vaccine misinformation.

Facebook and Instagram have apparently removed some posts, but the new Project Veritas video has still spread on those platforms.

Project Veritas is a far-right nonprofit founded by James O’Keefe that injects itself into news narratives by producing videos that purport to show some kind of bias or wrongdoing on the part of their target. In the past the group has gone after media companies, political campaigns, government officials, nonprofits, and unions, typically using cut-together footage from a hidden camera that is often edited to remove context and nuance.

In 2021, Project Veritas has been actively recruiting “insiders” to feature in its videos. These people are usually employees of companies or organizations Project Veritas targets to accuse of wrongdoing, often without substantial evidence.

On September 20, Project Veritas released a video featuring registered nurse Jodi O’Malley — depicted as an “insider” from the Phoenix Indian Medical Center, a hospital run by a subsection of the Department of Health and Human Services — making unsubstantiated claims that the vaccine harmed three patients and promoting the drug ivermectin as a treatment, despite warnings from public health agencies that it can be harmful. The video includes what appears to be secretly recorded footage of people inside of the hospital. O’Keefe did not disclose that this “insider” had a history of posting anti-vaccine rhetoric and conspiracy theories on social media before the video was released.

In the video, O’Malley mentioned three specific patients she believes were harmed by the COVID-19 vaccine, each with different symptoms. O’Malley provided O’Keefe with footage of two of these patients, including one patient’s (whose face is blurred) consultation with an anti-vaccine doctor at the hospital, Dr. Maria Gonzalez. O’Malley recorded Gonzalez saying, “The government doesn’t want to show that the darn vaccine is full of shit.” But aside from one doctor who appears to object to the vaccine, the “insider” provides no evidence that the shot -- which the Centers for Disease Control and Prevention has classified as “safe and effective” -- was the cause of any of these patients’ conditions.

O’Malley also promotes ivermectin as a COVID-19 cure, claiming that there are “no adverse reactions for trying it,” and the video presents footage of a conversation between O’Malley and a colleague who says she is “stuck” because even if a doctor suggested use of ivermectin, she will lose her job if she gives it to patients “as it is not allowed at this facility.” In fact there is scant evidence ivermectin actually works to treat COVID-19, and according to the Food and Drug Administration, even doses meant for humans, as opposed to the animals it often treats, can cause adverse reactions when taken with some other medications.

On YouTube, Veritas’ upload of the video has earned more than 2.7 million views in less than 24 hours. And the upload has in turn earned more than 250,000 Facebook engagements, according to social media tracking tool BuzzSumo. Among those sharing the upload on Facebook are a Minnesota Republican state representative and Republican Party county chapters in Tennessee and Washington state. The video has also earned thousands of additional views through direct uploads on Facebook and on Facebook-owned Instagram. 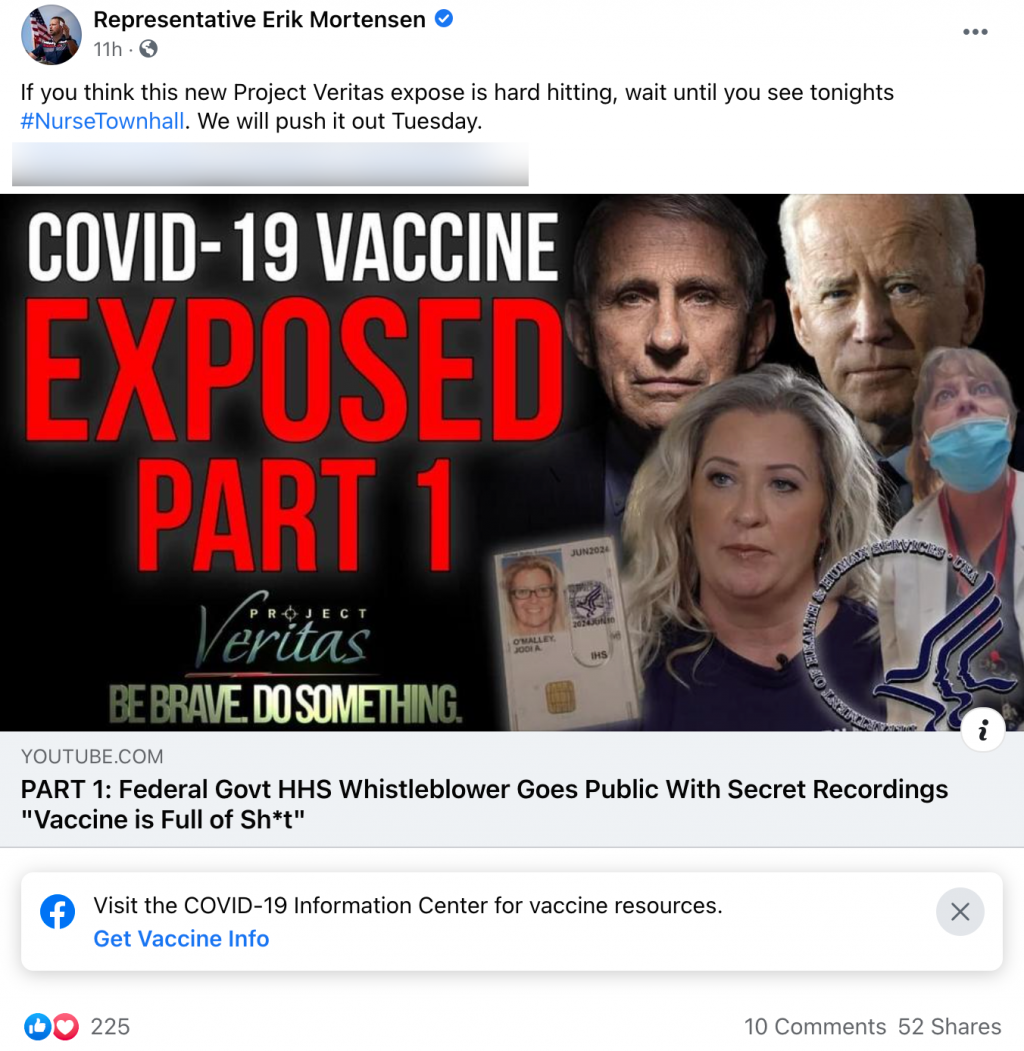 On Twitter, an upload from Veritas’ chief of staff has earned at least 1.5 million views, and it has been shared by Rep. Madison Cawthorn (R-NC), among others. Veritas’ upload of the video has been shared on the platform more than 18,000 times, according to BuzzSumo. 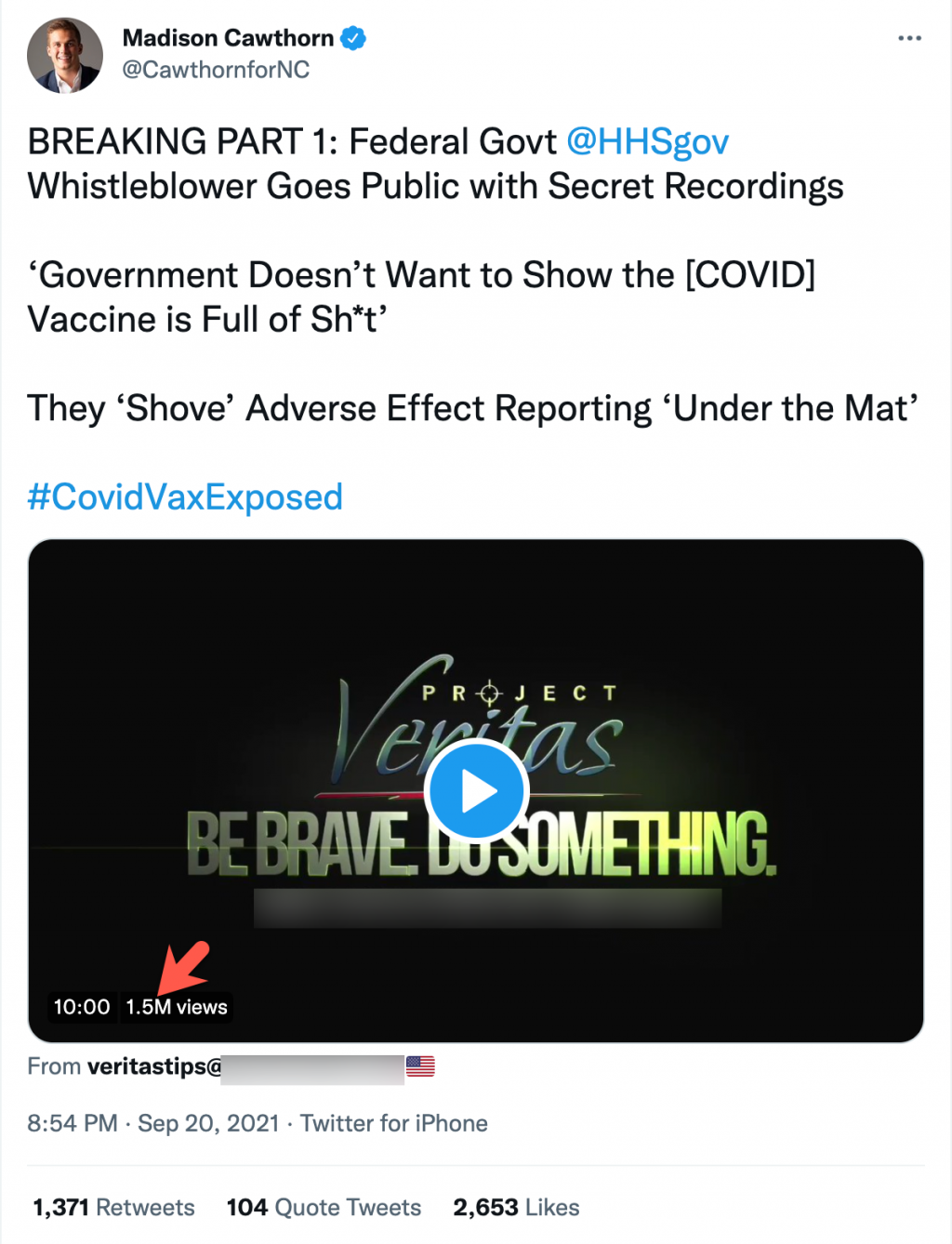 On TikTok, the video was seemingly first uploaded by Veritas’ official account, garnering over 13,600 views. However, individual users have already begun to reupload the video, drawing millions of views. TikTok appears to be labeling some of the videos with a COVID-19 vaccine information banner, but that labeling is not applied consistently -- even though TikTok claims to include banners “on videos related to COVID-19 and vaccines.” 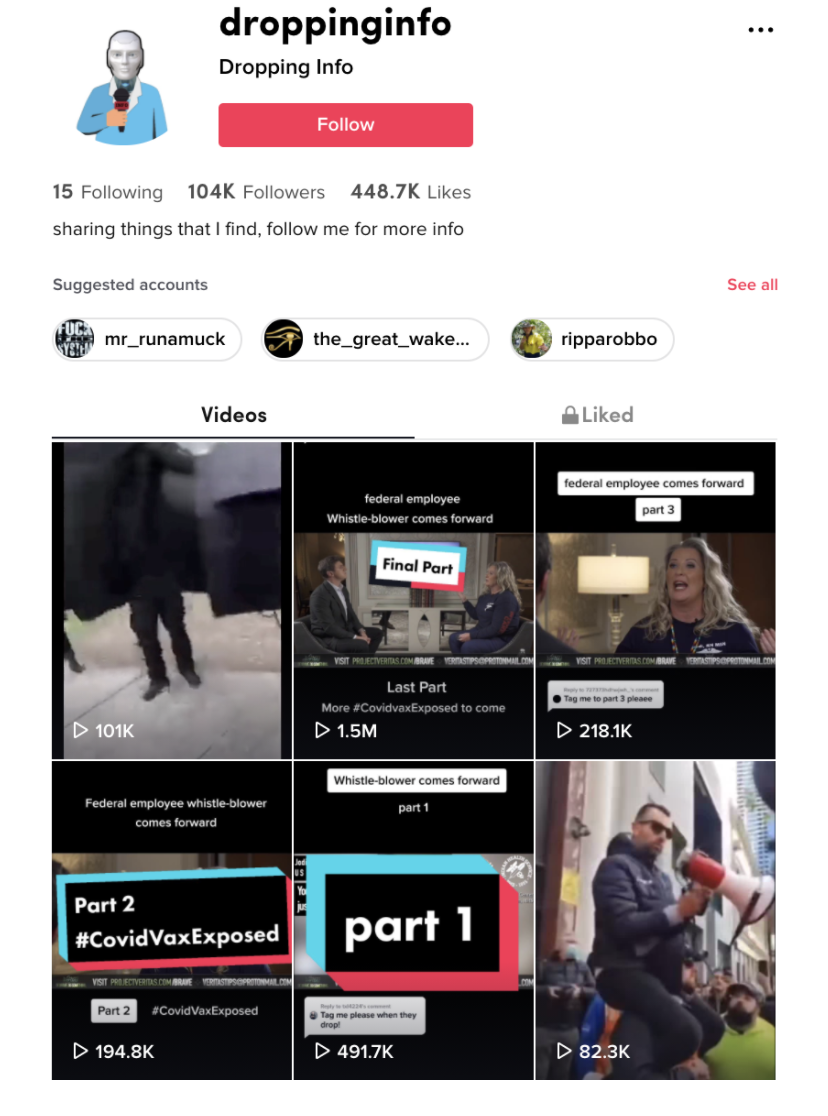 The video has also spread on less-mainstream platforms.

On Telegram, Veritas’ upload appeared to receive a million views, and the group urged followers to “quickly distribute this video by proxy on Twitter,” sharing a link that allowed people to do so (O’Keefe also uploaded the video on Telegram and apparently got over 600,000 views). Another upload on the platform from a neo-Nazi QAnon influencer apparently earned more than 125,000 views. On Rumble, a platform known for being friendly toward anti-vaccine misinformation, uploads of the video received more than 100,000 views combined. On Infowars’ streaming platform, an upload has gotten more than 30,000 views. And on Gab, CEO Andrew Torba -- who has been outspoken in attempts to sabotage the vaccination effort -- shared an upload of the video on Gab’s streaming platform, urging users to “share it everywhere.” That upload has gotten more than 44,000 views. 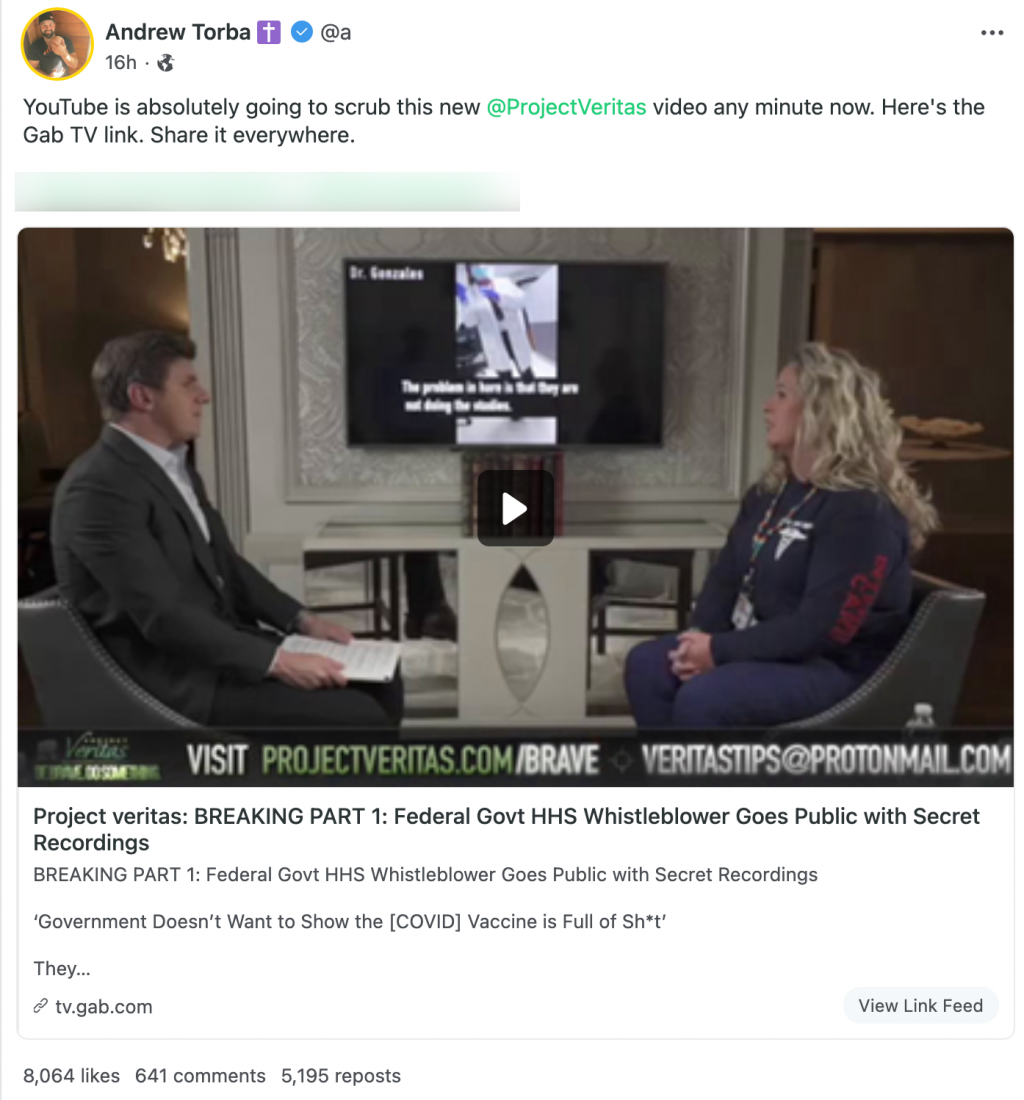 The new video’s spread shows that these platforms continue to struggle with containing misinformation about vaccines and COVID-19. And the spread of this video also demonstrates the social media pipeline -- usually from YouTube to Facebook, in particular -- that has allowed dangerous coronavirus misinformation from bad actors like Project Veritas to go viral time and again.