In the deadliest anti-Semitic attack in American history, a mass shooting on October 27 left 11 dead in a synagogue in Pittsburgh, PA. Reporters unearthed violently anti-Semitic messages the shooter had posted on the platform Gab, using an account that has since been deleted. Legacy media and companies that enabled Gab to sustain itself online are starting to grapple with the prominence of hate speech on the site, but for Gab, extremism has always been a feature, not a bug.

While activists had alerted some companies working with Gab that the site was transparently violating terms of service, it took a fatal mass shooting for payment processors Paypal and Stripe and cloud host Joyent to drop Gab. The site’s CTO has reportedly resigned, Gab was temporarily inaccessible, and its founder Andrew Torba is “working around the clock” for the site to remain online. Torba asked for prayers for his plight and in a particularly tone-deaf post characterized the site as being “under attack.” 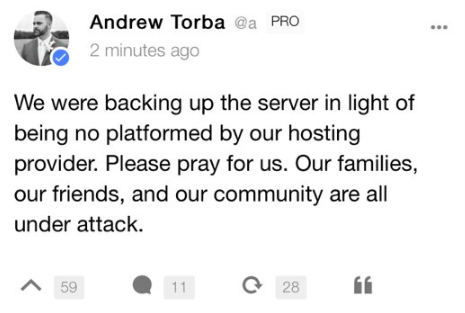 Trolling and harassment have been part of Torba’s business model since Gab’s founding in 2016. Torba himself was sacked from the alumni network of a startup accelerator he was a part of after he engaged in pro-Trump online harassment of a Latino, and he was photographed next to Milo Yiannopoulos, a Nazi sympathizer who was booted off of Twitter after organizing racist harassment of Black actress Leslie Jones. 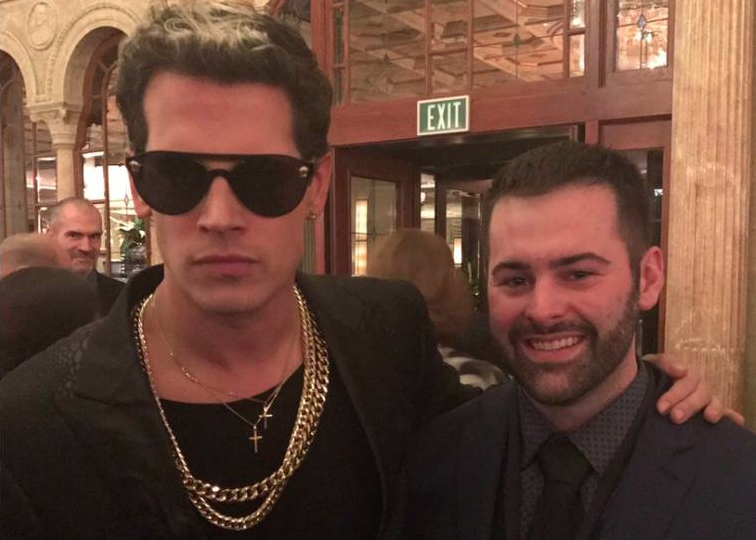 Gab was born in reaction to social media platforms that ban hate speech, extremism, and harassment, explicitly meant to provide a haven to those whose extremist content had gotten them banned from other platforms, specifically Twitter. Since the beginning, Torba and Gab’s chief communications officer, Utsav Sanduja, claimed that free speech came above anything else, and that they included harassment under free speech, telling Mic in March 2017: “Political incorrectness is a First Amendment right. ... We support freedom of speech and reject the politically correct definitions of what constitutes 'harassment.' [Social-justice warriors] do not get to define the verbiage, lexicon, culture or societal politics of the internet. Gab ... will repeal this politically correct, censorship culture.”

They knew extremism was what motivated users to go on their site. So much that, as Sanduja acknowledged in 2017, they were looking into removing the downvoting feature (a feature similar to reddit’s in which users can “upvote” or “downvote” posts so that posts can jump above others and get more prominently featured) because it was enabling targeted harassment and driving women away from the site. (During the email exchanges with Mic, Sanduja addressed journalist Melanie Ehrenkranz in a sexist manner.)

Extremists embraced the platform as an opportunity, and white nationalist darling Tucker Carlson hosted Torba during his prime-time show on Fox to promote Gab, failing to mention the extremism that had already festered on the site.

Prominent white nationalist Christopher Cantwell -- dubbed the “crying Nazi” following his teary reactions to the 2017 Charlottesville, VA, Unite the Right rally -- posted a message for newcomers with an anti-Semitic greeting, compelling them to not “worry about the racism” on the site, while recognizing that “it can be a little weird at first”:

The racism that Cantwell called “a little weird” was rampant and uncensored on the site, until neo-Nazi Andrew Auernheimer (best known online as weev) became the first person to be banned from Gab. weev, who has now migrated to guest appearances on racist shows on YouTube, was banned after Asia Registry, which used to host Gab, threatened to boot the site over a post in which weev wrote: “Jews have cornered the whole Internet. … And I think the only way we’ll have any freedom of speech here is if someone teaches them a lesson.”

Instead of acknowledging that extremism was a problem in the site, Torba claimed weev was among users posting extremism to “break the guidelines on purpose”; the idea was that they were trying to goad leadership into banning them to show they would break their commitment to free speech. A Gab user protesting weev's ban noted that the hashtag “gas the kikes” “is a constant statement on here and people are not getting banned.”

After white nationalist Paul Nehlen -- who ran as a Republican in a 2017 attempt to unseat Rep. Paul Ryan (R-WI) -- became the second person to be banned, it became clear that Gab’s application of its own rules was arbitrary. Despite obvious guideline violations, it wasn’t Nehlen’s often violent posts or his blatant white supremacy that got him sacked from the site. It was the politics over his revealing the true identity of the white supremacist known online as Ricky Vaughn, to which Gab’s leadership reacted inconsistently. First, Torba shrugged off what was being called a doxxing (revealing someone’s contact information to enable their harassment), only acting to remove Nehlen from the platform after the overwhelming support for Vaughn among Gab users made supporting Nehlen’s presence on the site untenable.

[Unless you're PJW please don't say “life comes at you fast,” it's so overused!] pic.twitter.com/OnJIFZCYkK

Nehlen doxxing one of his critics was consistent with other doxxing operations -- in which trolls organize to spread the contact information of a person they want to make the target of harassment -- going on undisturbed at Gab in ways identical to on anonymous message boards 4chan and 8chan. For example, after Judge William Young ruled in favor of upholding current Massachusetts gun regulations that ban assault weapons, pro-gun trolls on Gab set their sight on Young and doxxed him in retaliation. Another instance of organized harassment on Gab was an “operation” in which trolls targeted progressive voices on Twitter, instructing each other to use Twitter reporting mechanisms against a list of progressive accounts in what they felt was retaliation for their own banning from Twitter in the first place. Torba not only tolerated such operations, he encouraged them, calling followers to engage in fraudulent mass reporting on Twitter in the name of causing chaos.

For those of us tracking extremism on the site, the ways in which it served as an alternate universe where public opinion was supplanted by hate speech, became obvious. On any given day, activism took the form of white supremacy and users would fearmonger about diversity. Under the site’s “groups” feature, extremists openly organized under explicitly racist categories.

I have logged onto Gab nearly every day for over a year because of work. @getongab -- above anything else -- is an engine for anti-Semitism and bigotry. Already bloodthirsty posters are calling the killer a “hero” -- this is typical Gab stuff: pic.twitter.com/K5jjeSS3iO

More specifically, Gab offered racist interpretations of current events daily. After HuffPost reported that an anti-abortion activist was in fact a white nationalist, posters on Gab reacted with a shrug, complaining that “ethnonationalism” was “socially controversial,” and saying they hoped mainstream media reports like that would help “more people become white nationalist or identitarian.” On April 20, posters openly celebrated Adolf Hitler’s birthday, as evidenced by the site’s popular topics that day, and the reactions to the verdict that declared Bill Cosby guilty of assault were an intersection of racism and misogyny. On International Women’s Day, a sample of Gab takes included complaints that women had abandoned their “one job” of raising the next generation by joining the workforce, as well as statements like, “Women only belong in one place, and that’s in my basement shackled to the radiator; only to occasionally be let out so they can make me a sandwich.”

Happy #InternationalWomensDay from the lovely people on Gab! #IWD2018 pic.twitter.com/wO8sHXTs1C

The site’s extremist content often went beyond hateful words and into explicit exaltations of violence. Before he was banned, Nehlen prompted a discussion of a caravan of Central American immigrants in 2017 that included talk of armed militias, killing “every last one” and using them as “target practice.” 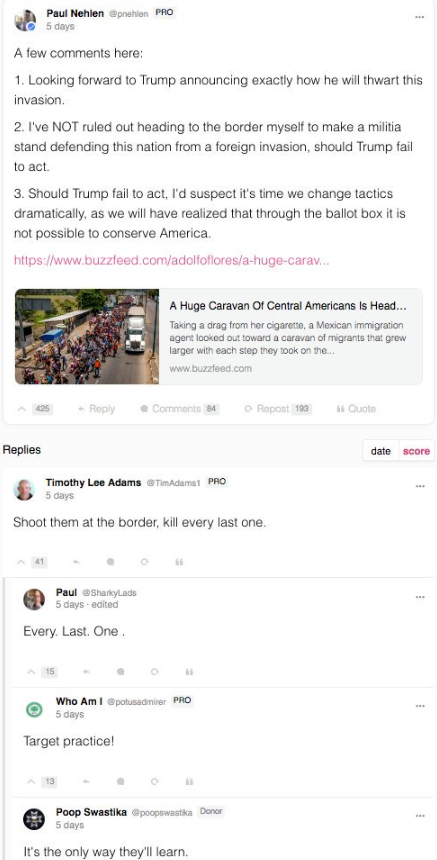 Neo-Nazi Andrew Anglin openly called for shooting Middle Eastern refugees and blamed Jewish people for waging “a psychological war” to push for the right of refugees to come to the U.S.: “All it would take to stop this is a few bullets.” And that wasn’t the first time Anglin had posted about shooting up Jewish people, but Gab leadership told a journalist asking for a reaction that he hadn’t crossed a line.

Another post that did not raise to the level of crossing a line for Gab was Anglin’s slur-laced, homophobic endorsement of corrective rape for lesbians.

However, even for someone as toxic as Anglin, unregulated speech on Gab was seemingly starting to get too toxic. In March, he complained that the trolling and abuse he was subjected to by fellow posters on Gab was made more burdensome by the site’s lack of a block button. Anglin felt that Gab’s mute button wasn’t enough. 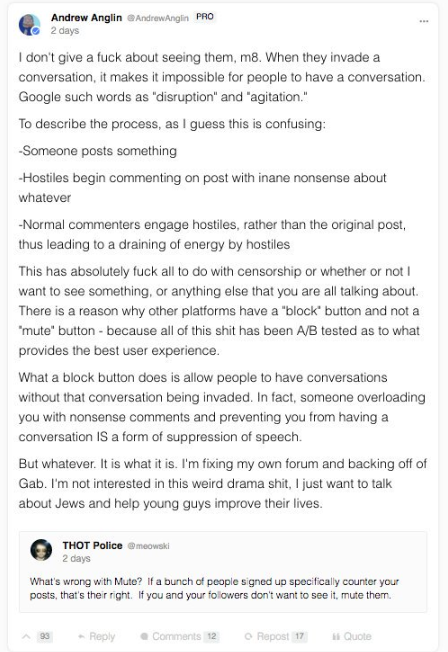 Gab’s Sanduja responded to Anglin, seemingly taunting him to leave the site if he didn’t like it. Anglin claimed he used to encourage “people to use this site” but that posters replying to “every post” he made by “promoting terrorism” and “posting gay porn” was causing him to stop. Sanduja responded to Anglin’s tantrum and his troll supporters by exchanging slurs with them. After a user seemingly insulted his ethnicity by alluding to a type of visa foreign workers with specialty occupations use, writing “typical H1B monkey,” Sanduja responded, “You’re welcome for the free speech, Stormfag” (in reference to Anglin’s site the Daily Stormer).

Gab’s leadership has always downplayed evidence of the extremism that festered on the site, potentially to avoid scaring away investors; leaders once told Daily Beast’s Kelly Weill that they thought “some of Gab’s Nazis are actually fake Nazis, who are just trying to make Gab look bad.” Neither Torba nor Sanduja offered proof of this claim, relying instead on the conspiracy theory that progressive organizations were supporting fake Gab accounts that post extremism to give the site a bad image, a theory that echoes somewhat the “false flag” reaction the far-right has faced with instances of right-wing extremism.

This mindset explains why financial pressures have been the only incentives that have made Gab’s leaders act against extremism on their site. Torba has always framed pressure from his third-party providers to regulate Gab’s content as “censorship” to free speech, going on like-minded Alex Jones’ Infowars outlet repeatedly to complain. He’s apparently aware of the ways violent neo-Nazi groups like the Atomwaffen Division use Gab and has done nothing.

Since people are finally paying attention to @getongab, I want to highlight again that the neo-Nazi group Atomwaffen Division and others plotting violence are organizing on that platform out in the open.

The CEO does nothing about this issue: pic.twitter.com/80QOsdwmqe

Back in August, Gab’s hosting provider, Microsoft Azure, gave the site 48 hours to remove two virulently anti-Semitic posts made by defeated neo-Nazi congressional candidate Patrick Little (who also ran as a Republican in a primary and is verified by Gab on the site). Little was suggesting raising Jewish people “as livestock,” and vowing to attack Holocaust memorials in the U.S. with a sledge hammer. After Azure’s pressure, the site removed the posts in contention, but before the site was taken offline, Little was still on Gab, where he reacted to the Pittsburgh synagogue shooting by urging his followers to blame the victims.

In an email statement to its users a full day after the synagogue shooting, Gab disavowed and condemned “all acts of terrorism and violence” but also condemned the press by saying, “We refused to be defined by the media’s narratives about Gab and our community.” In the statement, Gab’s leadership continued to take no responsibility for the extremism the platform has enabled since its inception by saying, “Criminals and criminal behavior exist on every social media platform.”