Republicans are pushing forward with a repeal of the Affordable Care Act (ACA), with Speaker of the House Paul Ryan (R-WI) leading the charge. The top Wisconsin newspapers have largely failed to convey the impact of repeal on Wisconsin residents on a variety of crucial metrics, with little to no mention of the impact on women and minority communities and insufficient contextualization of the potentially devastating changes to Medicare and Medicaid.

The GOP Is Pushing For The Repeal Of Obamacare, With Wisconsin’s Paul Ryan Leading The Charge

House Speaker Paul Ryan on Sunday said that the incoming GOP Congress' first order of business will be to repeal the Affordable Care Act (ACA), or Obamacare.

“Well, the first bill we're going to be working on is our Obamacare legislation,” Ryan said in an interview on CBS' 60 Minutes.

But what's less clear is how Congress plans to actually make good on this vow. In the interview with CBS correspondent Scott Pelley, Ryan was light on specifics. Ryan said that it will be important to preserve a sufficient “transition period [from Obamacare] so that people can get better coverage at a better price,” but he didn't specify how long that transition period would be. There have been reports that it could take as long as three years. [Fortune, 12/5/16]

Wisconsin Residents Will Be Negatively Impacted By The Repeal Of Obamacare

Center On Budget And Policy Priorities: 431,000 Wisconsin Residents Would Lose Coverage in 2019 Under ACA Repeal. A Center on Budget and Policy Priorities (CBPP) fact sheet cited analysis by the Urban Institute finding that “431,000 fewer people in Wisconsin would have health insurance in 2019 if the Affordable Care Act (ACA) is repealed.” The CBPP estimated that “nearly 60,200 more Wisconsin residents have enrolled in Medicaid since 2013,” and noted those gains would be reversed by a repeal of the ACA’s Medicaid expansion. The fact sheet also noted the disproportionate impact of repeal on low-income communities and emphasized that “harmful effects would be felt immediately” even if the repeal delayed implementation because “repeal would destabilize the nongroup insurance market beginning in 2017.” From the December 2015 factsheet:

431,000 fewer people in Wisconsin would have health insurance in 2019 if the Affordable Care Act (ACA) is repealed, new Urban Institute estimates show. Republican policymakers plan to move quickly in January to repeal much of the health reform law without enacting a replacement.

Moderate-income working families in Wisconsin would lose substantial financial assistance that is now available to help them pay their premiums and cost-sharing for insurance purchased in a marketplace. In 2016, Wisconsinites who enrolled in marketplace coverage receive an average advance premium tax credit of $330, which covers 73% of the total monthly premium for comprehensive coverage.

In addition, nearly 60,200 more Wisconsin residents have enrolled in Medicaid since 2013 – coverage gains that likely would be lost due to the elimination of the Medicaid expansion for low-income adults

Harmful Effects Would Be Felt Immediately

Repeal would destabilize the nongroup insurance market beginning in 2017 as a combination of several factors — pending loss of subsidies, elimination of the requirement to buy insurance, and the requirement on insurers to sell to all purchasers — would cause prices to rise and the healthiest people to drop coverage. Nationwide, 4.3 million people would lose insurance right away, rising to 7.3 million by 2019. [Center on Budget and Policy Priorities, 12/7/16] 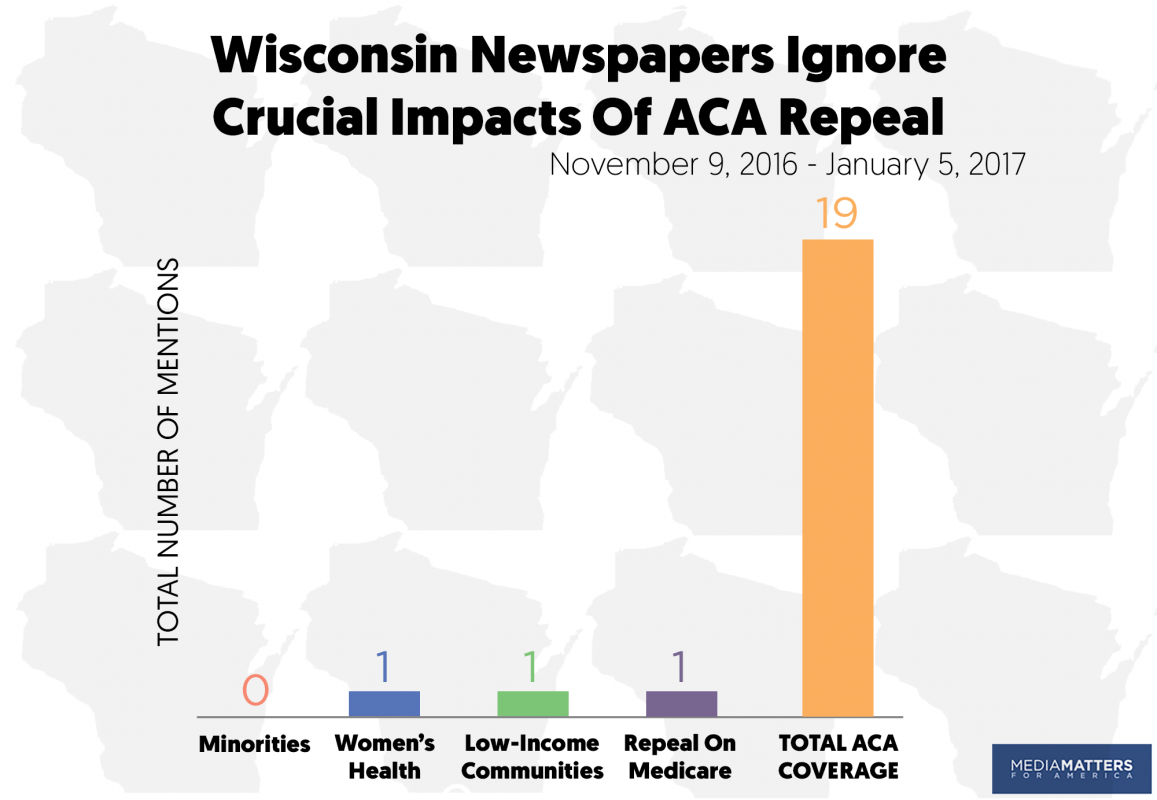 1. Failure To Cover The Impact Of Repeal On Minority Communities, Despite The Major Impact Of The ACA In Reducing Racial Health Disparities

There Were Zero Mentions Of The Impact On Minority Communities. Not a single article from the top three Wisconsin newspapers by circulation, the Milwaukee Sentinel-Journal, the Wisconsin State Journal, and the Green Bay Press-Gazette, addressed the impact that the repeal of the ACA would have on minority communities.

ACA Made Significant Strides In Reducing Racial Health Disparities. The ACA has decreased the gap in insurance rates between racial and ethnic minorities and non-Hispanic whites. Prior to the ACA, minority communities faced financial barriers to accessing care in part because of, as Politico explained, pre-existing conditions such as “high rates of diabetes among Latinos or Hepatitis B among Asians.” When they fail to treat these conditions with a primary care physician, patients often got sicker, thereby requiring more costly treatment. [Politico, 1/19/11; Families USA, 4/22/14; Democratic Policy and Communications Committee Fact Sheet, accessed 1/9/16; The Atlantic, 4/9/14]

2. Inadequate Coverage Of The Detrimental Consequences Of Repeal On Women’s Health, Even Though The ACA Was Essential In Improving Access To Women’s Health Care

Only One Article Out Of 19 Addressed The Negative Impact Of Repeal On Women’s Health Care. In all of the papers’ reporting on the potential ACA repeal, only one article from the Wisconsin State Journal mentioned the potential impact on women’s health care. The article focused on the increased demand within Wisconsin for IUDs, one of the most effective (but expensive) forms of birth control, which women fear they will lose access to if the ACA is repealed.

ACA Repeal Will Increase Costs And Reverse Gains In Women’s Health Care. Studies show the ACA significantly reduced out-of-pocket costs for women’s contraception while increasing coverage for reproductive-age women. Under the ACA, the uninsured rate among reproductive age women has fallen by nearly one-third, according to a November 17, 2016, Guttmacher Institute study. According to the National Women’s Law Center, “Repeal of the ACA could return us to a world where insurance companies can indiscriminately charge women more than men for health coverage, deny women coverage of critical services, and impose high costs that effectively deter women from accessing care that is essential to their health and well-being. This not only harms women’s health, it also undermines the economic security of families and communities.” [Health Affairs, July 2015; Guttmacher Institute, 11/17/16; Kaiser Health News, 11/29/16; National Women’s Law Center, 12/12/16]

3. Weak Reporting On The Negative Implications For Low-Income Communities, Even Though Repeal And Proposed Changes To Medicaid Will Gut Coverage

There Was Only One Mention Of The Impact Of Repeal On Low-Income Communities, Despite The Potentially Devastating Impact Of Proposed GOP Changes To Medicaid. Only one article addressed the impact of ACA repeal on low-income communities, out of 19 total articles. More problematically, there were two mentions of potential changes to Medicaid that didn’t mention the impact on the poor, even though Medicaid is a social program directly aimed at low-income communities.

Experts Show ACA Repeal And Proposed Medicaid Changes Will Gut Coverage. According to studies, full repeal of the Medicaid expansion could endanger 11 million Medicaid enrollees. In addition, reform plans, such as block grant proposals previously advocated for by anti-ACA activists, would mean that millions of Americans would lose access to health insurance and that states would have decreased capability to expand the program or increase benefits in the future. [Urban Institute, 9/8/16; Center for Budget & Policy Priorities, 3/17/15; Kaiser Family Foundation, 12/6/16]

4. Largely Ignored The Adverse Ramifications On Medicare, Despite The Positive Impact The ACA Has In Improving The Solvency Of Medicare

There Was Only One Mention Of The Potential Negative Impacts Of ACA Repeal On Medicare. Only one article addressed the impact of changes to Medicare being considered by conservatives in the discussions surrounding the ACA repeal.

ACA Repeal Will Massively Increase Medicare Costs And Accelerate Insolvency. Repeal of the ACA would reverse gains in extending the solvency of Medicare, and potential plans to privatize Medicare that have been discussed as part of the repeal effort would gut access and cause skyrocketing healthcare costs. [Kaiser Family Foundation, 12/13/16; Chicago Tribune, 12/8/16]

Despite The Overall Lack Of Reporting On Key Issues, One Article Showed How To Report On A Potential ACA Repeal

Wisconsin State Journal Piece Shows How To Report On ACA Repeal Effort. A December 4 article from the Wisconsin State Journal provides a clear example of strong reporting on the potential impact of a repeal of the ACA, even though the Journal was the newspaper with the least coverage overall. Instead of mentioning the potential changes to the health care system in the abstract, the article outlined specific GOP proposals, such as creating health savings accounts and selling insurance across state lines, and noted the specific impacts they could have on Wisconsin. It discussed potential changes to Medicare and Medicaid in depth and cited local experts including Donna Friedsam, health policy programs director at the University of Wisconsin Population Health Institute, and Eric Borgerding, president of the Wisconsin Hospital Association, providing crucial context for Wisconsin readers. While the Wisconsin State Journal had the least coverage of the state’s three major papers overall, this particular article featured in-depth, comprehensive reporting that should serve as a template not only for its own coverage going forward, but also for other Wisconsin newspapers:

Plans by President-elect Donald Trump and Congress to get rid of the Affordable Care Act and substantially alter Medicaid could have a big impact in Wisconsin, where 224,000 people get insurance on the health law's exchange and another 1.2 million receive some form of Medicaid, the state-federal health plan mostly for the poor.

“It's a quarter of our population,” said Donna Friedsam, health policy programs director at the UW Population Health Institute. “It's our neighbors, our family, our friends who are closely affected by the changes ahead.”

“Obamacare” “drives up premiums and deductible costs for individuals, families, and businesses. It forces people off plans they like,” the authors of the GOP blueprint wrote at the time. “Our plan recognizes that people deserve more patient-centered care, not more bureaucracy. That means more choices, not more mandates.”

In Wisconsin, the big question is whether such proposals would allow the 224,000 people insured through the exchange, or marketplace, to remain covered, said Eric Borgerding, president of the Wisconsin Hospital Association.

Largely because of the exchange and its tax credits, which 85 percent of state enrollees use to buy private insurance, Wisconsin's number of uninsured residents dropped from 518,000 in 2013 to 323,000 last year, or 5.7 percent, sixth lowest among states.

“How do you sustain what we have achieved?” Borgerding said. “We have achieved something, regardless of what anybody thinks about ‘Obamacare.'”

If the post-ACA system leads more people to become uninsured, the Medicare cuts “are something we're going to be talking about very loud and clear,” Borgerding said.

Health savings accounts, which accompany high-deductible health plans, and tax credits based on age instead of income could make it more difficult for lower-income people to afford medical care, said Jon Peacock, research director of the Wisconsin Council on Children & Families.

“People are not going to be able to afford high-quality coverage,” Peacock said.

Some states already allow insurance to be sold across state lines, but it's generally not done because state regulations differ and it can be difficult for insurers to establish provider networks in other states.

While the push to replace the ACA with Republican-driven ideas is getting the most attention, Medicaid reform could have a larger impact, Peacock said.

“I'm far more worried about what could happen to Medicaid,” he said. “It's such a fundamental building block of our health care system. It's critical for low-income families, the elderly and people with disabilities.”

Borgerding said he's concerned about how block grant amounts would be determined.

“I hope states like Wisconsin are not penalized,” he said. [Wisconsin State Journal, 12/4/16]

Media Matters conducted a search from November 9, 2016, to January 5, 2017, in Nexis for any mention of “health care” or “Obamacare” or “Affordable Care Act” in the Green Bay Press-Gazette and the Wisconsin State Journal. Media Matters conducted a Google site search for the same search terms during the same time period for the Milwaukee Journal Sentinel because its articles were not accessible through Nexis. Articles that primarily focused on repeal of the Affordable Care Act were included for analysis. Mentions of Medicaid, Medicare, the potential impact of ACA repeal on Medicaid and Medicare, mentions of the potential impact on women, minorities, and low-income communities were tallied in their own categories.