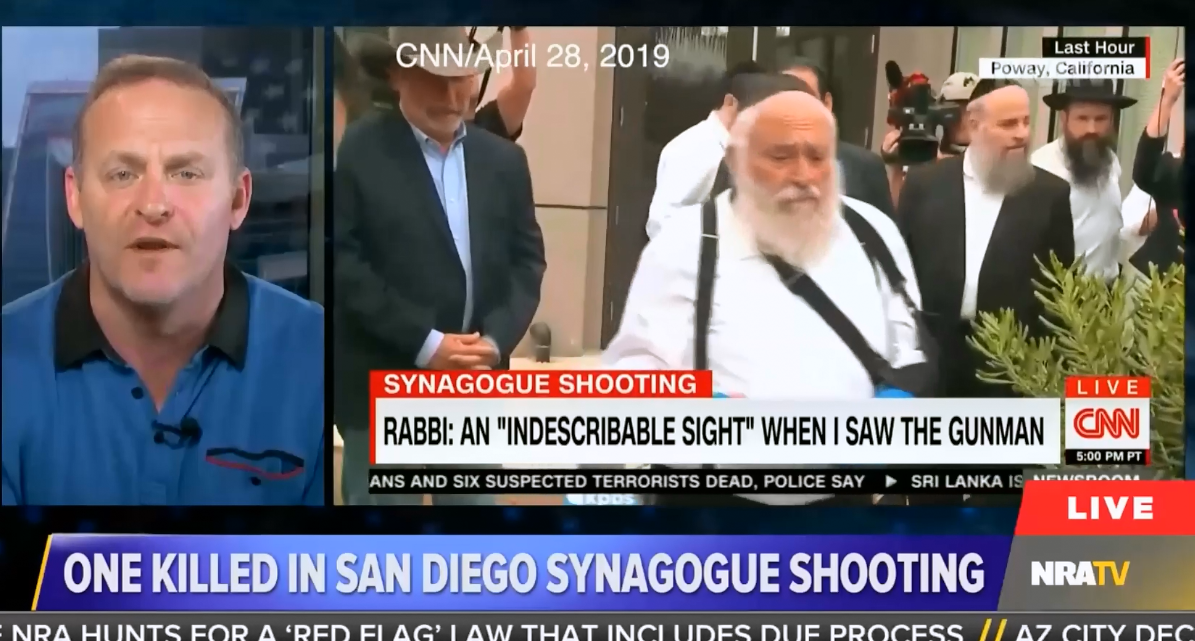 The National Rifle Association’s media arm, NRATV, broadcast a false retelling of the April 27 California synagogue shooting in order to credit an armed worshipper with “almost instantly” stopping the incident. In fact, the gunman was confronted and chased out of the synagogue by an unarmed worshipper.

On April 27, a 19-year-old gunman opened fire in the Chabad of Poway synagogue near San Diego, CA, killing one and injuring three others. According to witnesses, the gunman’s semi-automatic rifle jammed and that gave U.S. Army veteran Oscar Stewart an opportunity to chase him out of the building before another worshipper, Jonathan Morales, an off-duty Border Patrol agent, fired several shots at the gunman’s car. Stewart told The San Diego Union-Tribune that he “screamed as loud as he could” to startle the gunman before chasing him out to his car. Stewart then began punching the gunman’s car before the agent advised him to move out of the way so he could fire on the vehicle. The gunman was arrested a short time later after he pulled over and called 911 on himself.

In a manifesto that he allegedly wrote before the shooting, the gunman claimed responsibility for setting a nearby mosque on fire in March, and championed previous hate crimes including the Christchurch mosque shootings in New Zealand and the Tree of Life synagogue shooting in Pittsburgh, PA.

During the April 29 edition of NRATV’s Stinchfield, host Grant Stinchfield erroneously claimed “the shooter was almost instantly chased out of the sanctuary by an off-duty Border Patrol agent with a gun.” He went on to say “That confrontation, I am convinced, prevented the shooter from killing others,” failing to mention the rifle malfunction or Stewart, who had actually rushed the gunman:

GRANT STINCHFIELD (HOST): Religious leaders across America are on edge as a deranged, hate-filled teen entered a California synagogue killing one woman and wounding three others, including the rabbi. There is so much not being reported about this story that needs to be. This synagogue actually trained for an active shooter situation. The rabbi says that training saved lives. The shooter was almost instantly chased out of the sanctuary by an off-duty Border Patrol agent with a gun. No matter what you say, that confrontation, I am convinced, prevented the shooter from killing others. Then, even with all the California gun laws, the shooting still happened. With guns bans and waiting periods, mandates for classes, this vile human responsible still managed to get a gun and go on this rampage. These are the stories the mainstream media refuses to cover. Sometimes there are brief mentions of these issues, but almost always buried at the bottom of the piece. The strength of Americans is what should be celebrated after this horrific loss.

In the wake of the Christchurch shootings on March 15, Loesch also ran with an early and ultimately false report that a “good guy with a gun” fired at the gunman and stopped the incident. The gunman in that incident was actually confronted by a man who threw a credit card reader at him, but Loesch never issued a correction for her claim.