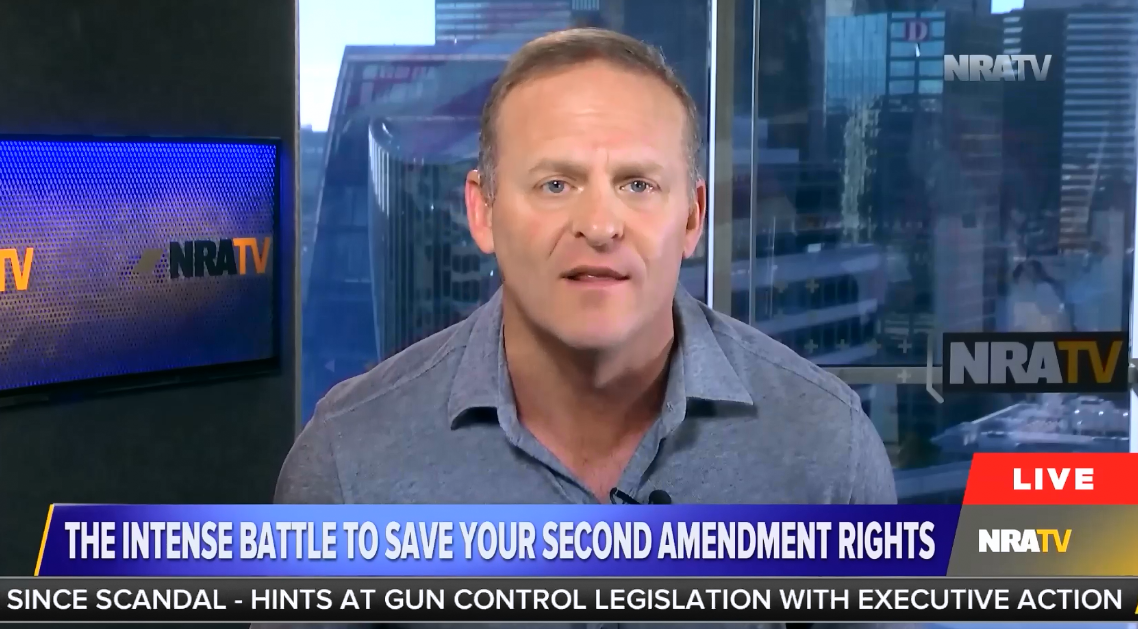 NRATV host Grant Stinchfield on Friday offered a scathing critique of his critics that seemed aimed at the leadership of the National Rifle Association. The NRA has been feuding with its ad firm, which produces NRATV.

“If you think I’m too blunt, our words are too strong, quit your whining, get serious about this fight or move over and let someone else fight for you,” Stinchfield said during his June 7 show. He also denied that he has ever broadcast any extreme content on NRATV.

In March, members of NRA’s leadership, including CEO and Executive Vice President Wayne LaPierre, publicly questioned the value of NRATV, which the NRA contracts ad firm Ackerman McQueen to produce, and expressed concern about the inflammatory content it airs.

The NRA and Ackerman McQueen are now wrapped up in multimillion-dollar lawsuits and are making salacious allegations of financial misdeeds against each other. The infighting has resulted in the ousting of former NRA President Oliver North (who remains an employee of Ackerman McQueen) and has exposed a rift at the NRA that puts a pro-LaPierre faction that questions the value of NRATV against a pro-North faction that supports the network.

On May 29, Ackerman McQueen submitted a notice of intent to terminate its nearly four-decade-long partnership with the pro-gun organization. The NRA responded with a statement that said it can now refocus its messaging back to issues related to firearms. As of June 2, the NRA acknowledged that the concept of NRATV “remains under review.”

Even though the NRA and Ackerman McQueen have apparently agreed to terminate their relationship, NRATV has, for now, continued to air as usual. And during his June 7 broadcast, Stinchfield seemed to critique the leadership at the NRA. He also attempted to justify his decision to regularly cover issues unrelated to firearms on his show, saying, “Make no mistake: All the issues we face today, from immigration to spending to the battle over our guns to the war on terror and free speech, they are all connected. If you only fight for the Second [Amendment], you ignore the others”:

GRANT STINCHFIELD (HOST): I laugh at those who claim the NRA is an extremist group. Some even call us terrorists. Others say NRATV is a right-wing propaganda machine. Have these people seen or heard what those on the left say and do? We don’t push hate, we push truth. I challenge anyone to tell me one thing I’ve said on this network that’s extreme. I call out the media’s bias, I point to their-almost daily lies, I back up my points with facts, I support the Second Amendment and I push and fight for freedom daily. But then again, to those on the left, all that is extreme. Supporting the values America was founded on, to them, is extreme.

The New York Times and The Washington Post have done everything in its power to disparage and destroy the NRA. These media outlets, along with MSNBC and CNN, know that to get to the Second [Amendment], they have to go straight through the NRA, and who do you think is on the front lines of that information war? NRATV.

So yes, I will call out the left’s bullcorn. And I will tell the world again and again, you are either with us or against us. Because this battle that we are engaged in, yes it can be harsh, it is not for the faint of heart, but it is for the soul of this nation. Our rights are absolute. So is our straight talk. And make no mistake: All the issues we face today, from immigration to spending to the battle over our guns to the war on terror and free speech, they are all connected. If you only fight for the Second, you ignore the others. If you only fight for the others, the Second will be destroyed and the others will soon follow. My commitment is to never give up. If you think I’m too blunt, our words are too strong, quit your whining, get serious about this fight or move over and let someone else fight for you. 2020 is almost here, and if we lose that one election, we could lose so much more. So join us, join the five-and-a-half million members of the NRA. Stand and fight with us.

While defending his rhetoric, Stinchfield challenged “anyone” to show him his extremism on NRATV, which is well-documented. It ranges, in topic, from immigration and sexual assault and includes white nationalist talking points and conspiracy theories.