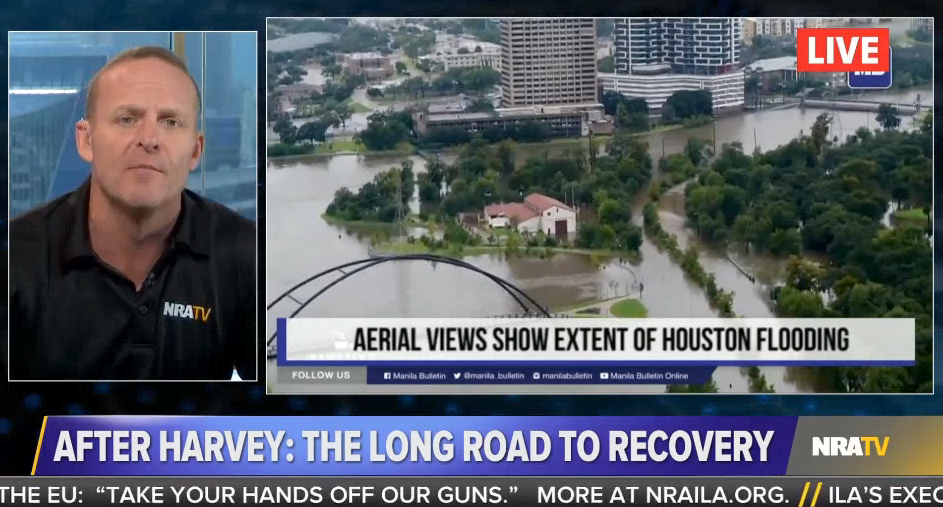 NRATV hosts repeatedly used hurricanes Harvey and Irma to push for both more gun ownership and pro-gun laws, while fearmongering that this type of catastrophe can happen anywhere and people should be prepared with guns to fight looters as law enforcement can’t be everywhere.

The National Rifle Association’s broadcast platform, NRATV, steadily covered the devastation caused by Hurricane Harvey in Houston during Stinchfield, the daily show that runs for 10 minutes at the top of the hour from 9 a.m. to 1 p.m. Host Grant Stinchfield regularly used these segments to plug “unfettered access to firearms” in order to protect from criminal elements that he claimed take advantage of natural disasters. For instance, in one segment on August 30, Stinchfield talked to correspondent Chuck Holton about “a few reports of looting” in Texas in the aftermath of Harvey, saying, “The police clearly can’t be everywhere.” Stinchfield went on to claim that he had heard that some evacuees in Houston took their firearms with them during evacuation and that they were “grateful we live in a state like Texas that allows us to have personal protection.” Stinchfield also said he hoped “states like New York and California would look at Texas as a model” before fearmongering that “the identical situation could happen” there.

The next day, Stinchfield reiterated that “evildoers do take to the streets” after natural disasters but that “Texans have unfettered access to firearms” which “puts the victims of this disaster at ease,” during the August 31 edition of Stinchfield. He went on to shamelessly fearmonger that “another hurricane, a massive storm, maybe event an earthquake … could take out your city next month, next week or maybe even tomorrow” and asked his audience, “Do you have access to protection?” Stinchfield also claimed, “The thugs and thieves know that your vulnerability can be exploited. Thugs know Texas, they also know California and the other states trying to disarm the public,” and again claimed that Texas’ gun ownership laws served as a deterrent for criminals after the hurricane.

GRANT STINCHFIELD (HOST): Criminals will always exploit weakness. With Houston under water and emergency responders working around the clock, South Texas faces difficult times ahead -- that may be an understatement. Many of the people who live in the region are well aware police can't be everywhere, especially not when they are stretched as thin as they are now. But this is Texas. Unlike so many states, Texans have an unfettered access to firearms. That puts the victims of this disaster at ease. In fact, it empowers them as more and more reports of looting and stealing are starting to emerge.

STINCHFIELD: Well those two are prepared. Texans know it is our responsibility to protect ourselves. Now, I have covered natural disasters like this for 25 years. Always, when the storm passes, the evildoers do take to the streets. It’s already starting to happen on a limited basis in South Texas. I am hopeful, but not convinced, it won’t become more widespread. You need to know what we are seeing in Texas could happen in New York or California or Connecticut. Another hurricane, a massive storm, maybe even an earthquake. It could take out your city next month, next week, maybe even tomorrow. When emergency personnel are pulled in every direction, do you have access to protection? The police, as we said, can’t be everywhere. They never can. But certainly not in time like this.

STINCHFIELD: The thugs and thieves know your vulnerability can be exploited. Thugs know Texas; they also know California and the other states trying to disarm the public. Texas has a rich history of gun ownership. In Houston, that history is most certainly serving as a deterrent.

During the September 5 edition of his show, Stinchfield said the rest of the country should “look at Texas and take these cues” of gun ownership, saying, “I promise you, in California, if you had widespread destruction like we’ve seen in the Houston area, the criminals would go hog wild in that state.”

A little over a week after Hurricane Harvey made landfall, Category 4 Hurricane Irma was set to hit the U.S. Virgin Islands and Puerto Rico, before making its way to Florida and the Keys. In preparation for the storm, the governor of the U.S. Virgin Islands issued an order that allowed the National Guard to “restore public order and to guarantee the safety of life and property” of people and allowed the adjutant general to seize “arms, ammunition, explosives, incendiary material, and any other property that may be required … for the performance of this emergency mission.”

NRATV quickly and predictably used this state of emergency order to push for firearms ownership.

Stinchfield slammed the order during the September 6 edition of his show, claiming that “the last thing they need to worry about is how to protect themselves” before going on to say, “The people of the Virgin Islands need to stand up and say enough is enough. … We will vote you out of office if you even come near our firearms.” NRATV correspondent Chuck Holton agreed with Stinchfield, saying everyone in Texas was carrying weapons after Harvey and instead of violence, “we saw politeness everywhere.” During the 1 p.m. edition of Stinchfield the same day, the NRATV host called this order “an overreach the likes of which I have not seen in a very, very long time.”

In the aftermath of Irma’s second landfall in Florida on September 10, Stinchfield praised a 2015 NRA-backed law that allows Florida gun owners to carry a concealed weapon without a permit for 48 hours during a state of emergency.

Stinchfield claimed that “anything we can do to help push through pro-gun, pro-Second Amendment legislation” is a good idea. Holton used the opportunity to claim the pending National Concealed Carry Reciprocity legislation, which would require each state to recognize concealed carry licenses from every other state despite varying qualifications, “would be really good right now, wouldn’t it?”

NRATV highlighted instances of looting to claim more guns led to less crime in Texas than Florida, even though they have similar gun ownership rates

A day after Irma made landfall in Florida, NRATV picked isolated events of looting in Florida in an effort to show that more guns had led to less crime in Texas.

NRATV repeatedly showed the same video of a group of looters in Fort Lauderdale to fearmonger about supposed widespread looting in the state. During the 9 a.m. update on September 11, Stinchfield claimed “We saw limited amounts of looting in Texas after Harvey. One of the reasons was because of Texans’ rich history with gun ownership”:

GRANT STINCHFIELD (HOST): Any time a situation like this happens, chaos then ensues. We saw limited amounts of looting in Texas after Hurricane Harvey. One of the reasons is because of Texans’ rich history of gun ownership. In Florida, though, the situation is different, and it’s starting early. We are already getting reports of looting in Florida. This is in Fort Lauderdale, where people are breaking into stores. And you talk about stealing things for survival -- that is not survival. That is a store where they are stealing T-shirts and clothing. That is not about stealing water and food. The people running into that store, it might as well be Christmas for them as so many people suffer in that state. There are now upwards of 6 million people out of power, at the same time people take to the streets to loot. The big concern for many folks is what will happen to their homes? Will their homes be broken into?

During the 11 a.m. update the same day, Holton admitted that there were probably more reports of looting in Florida than in Texas “because the geographical area that this storm affected was so much greater” in the former. But he still went on to claim that guns were the reason Houston saw little looting -- even though people in Florida are allowed to carry concealed weapons -- saying, “Something about … having people just wearing it right there on their hip that tended to make everybody just a little bit more polite.”

Despite NRATV’s best efforts to claim that gun ownership was responsible for limited looting in Houston, Florida and Texas have statistically nearly the same percentage of gun ownership.

Praising vigilantes and pushing false stories of widespread looting after natural disasters are popular NRA and right-wing media talking points, and it is a myth that widespread looting or crime sprees occur in the aftermath of natural disasters. For instance, Scott Gabriel Knowles of Drexel University, a historian and author of the book The Disaster Experts: Mastering Risk in Modern America, has noted that “50 years of social science research indicates that widespread looting is really pretty much a myth. … There's pretty good evidence, looking at Hurricane Sandy for example, that crime can actually go down in the midst of a disaster.”