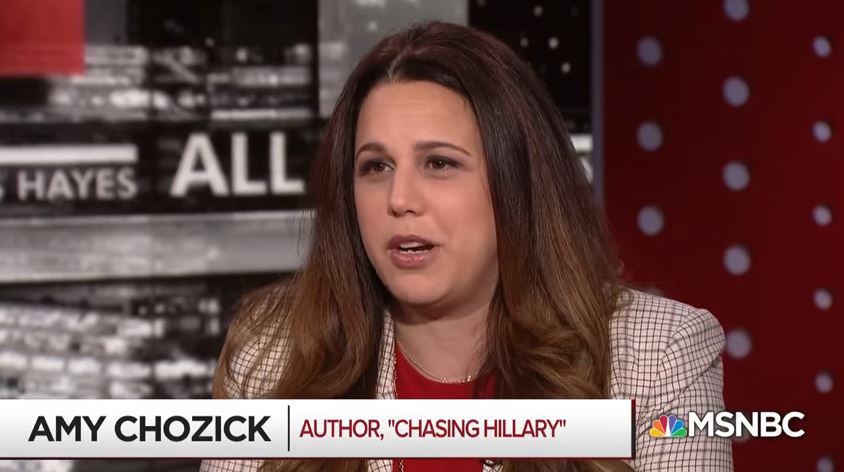 New York Times reporter Amy Chozick’s just-released memoir, Chasing Hillary, offers a detailed and direct admission that major media outlets played into Russian President Vladimir Putin’s hands by devoting obsessive coverage to hacked Democratic emails during the 2016 presidential campaign. It's a striking acknowledgment, given how defensive the Times and its campaign journalists have generally been about their work. But rather than writing off Chozick's mea culpa as proof of personal weakness or a one-off error, journalists should take it as a warning. The 2016 election may have been the first time that journalists found themselves the tools of a foreign government aimed at undermining American democracy. It won't be the last.

In a chapter titled “How I Became an Unwitting Agent of Russian Intelligence,” Chozick, who spent a decade covering Hillary Clinton for the Times and The Wall Street Journal, recounts the October afternoon when WikiLeaks began releasing a new set of documents obtained from Clinton campaign chair John Podesta’s Gmail account. By then, journalists had reason to suspect that hackers working for Russian intelligence services were the source of the emails. Nonetheless, Chozick writes that she “chose the byline” rather than urging her editors to consider the possibility that the paper was being used by a hostile government. She was not alone -- virtually every major publication devoted significant attention to the hacked emails.

Only after the election, when Times national security reporters detailed how the all-consuming reporting had aided the Russian plot, did Chozick come to grips with what she had done: “[N]othing hurt worse than my own colleagues calling me a de facto instrument of Russian intelligence. The worst part was they were right.”

The Times post-election bombshell on the Russian hacking campaign that caused Chozick to reassess her actions started a conversation about how journalists had treated the hacked emails, including inside the Times. But those discussions yielded little consensus, with leading newsroom figures, notably including Times executive editor Dean Baquet, arguing that their outlets had done nothing wrong.

Baquet presents a false choice between hiding vital information from the public and behaving exactly as media outlets did during the 2016 election -- one that seems to appeal to other Times political reporters. This formulation ignores a third option -- that the failure wasn’t that news outlets had published emails stolen by a hostile source, but that the scope of their coverage greatly exceeded the actual news value of the emails. The hacked email coverage is one of a series of cases in which poor editorial judgment led to an overwhelming focus on Clinton email-related purported scandals instead of pressing policy issues.

There’s a reason that critics of media coverage of the Russia-hacked emails fixate on the revelation of Podesta’s risotto recipe -- it’s a perfect encapsulation of the sort of small-bore “scoop” that journalists discovered when rooting through the documents that had been stolen from the Clinton campaign chair. There were valid stories in the lot, but none of them detailed the sort of illegal behavior or sinister scandal one might have expected from the tone and volume of the coverage. Instead, “The dominant feature of the emails was their ordinariness,” as the Times’ David Leonhardt explained in a column last May.

Given how mundane the emails were, journalists should have given their content much less attention, while making the fact that they had been released as part of an effort by a hostile foreign government to sway the election an essential part of their reporting. That’s how French reporters would later treat the release of “spectacularly mundane” emails stolen from Emmanuel Macron’s 2017 campaign for president of France. It’s also how the Miami Herald treated hacked internal Democratic campaign documents -- finding them “embarrassing” but unenlightening, the paper published only two articles about them, one of which highlighted in its first sentence that the documents seemed to have been obtained by Russian hackers.

“The overhyped coverage of the hacked emails was the media’s worst mistake in 2016 — one sure to be repeated if not properly understood,” Leonhardt concluded a year ago. It won’t be long until we find out if journalists will repeat that failure. “There should be no doubt that Russia perceives its past efforts as successful and views the 2018 US midterm elections as a potential target for Russian influence operations,” Director of National Intelligence Dan Coats testified in February, one of the numerous national security experts to warn that Russian election meddling will continue.

Chozick’s memoir provides a new opportunity to consider their past errors and strive for a better process as the 2018 elections loom. Reporters won’t be “unwitting agent[s] of Russian intelligence” again -- the next document dump intended to warp the democratic process will come after plenty of warnings. If major media outlets want to avoid becoming witting agents of a foreign power, they need to consider what happened in 2016 and develop processes that make that less likely. And it would behoove them to tell their readers and viewers up front how they plan to cover stolen documents going forward.

Maybe then we’ll be spared future attempts by reporters to explain why they always "chose the byline.”