David Brooks has a problem with single mothers.

The New York Times opinion columnist scapegoated unmarried moms for their poverty in his January 16 column, joining a chorus of media figures who have ignored basic economics to suggest that marriage is a magic-bullet solution to poverty.

Brooks claimed that “someone being rich doesn't make someone poor,” arguing that discussions of income inequality have been too focused on disparities in wealth and not focused enough on the “fraying of social fabric” and the “morally fraught social and cultural roots of the problem,” which he pinned in part on single motherhood (emphasis added):

First, Brooks is wrong on the basic arithmetic of income inequality. As economist Elise Gould at the Economic Policy Institute has explained, “if it had not been for growing economic inequality, the poverty rate would be at or near zero today.” This is because without inequality, economic growth would be shared equitably among all income levels; instead, since the 1970s, growing inequality has increased poverty, as the rich benefit more from economic growth. 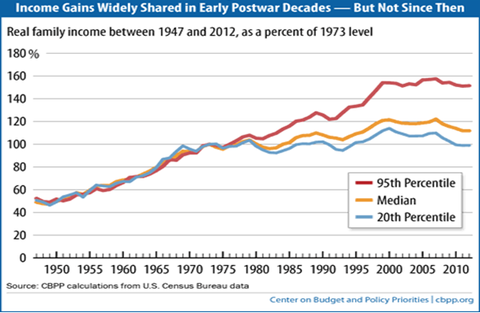 Second, the “problem” of single motherhood is not that mothers aren't married; it's that significant numbers of unmarried mothers don't have access to basic support systems like childcare, paid family and medical leave, and family planning -- necessary social supports that Brooks dismisses in favor of fearmongering about “fraying of social fabric.”

The recently released Shriver Report on women's economic realities in America found that economic policies and programs that improve access to education and child care can do more to help decrease economic hardship for women than marriage ever could. Karen Kornbluh, former ambassador to the Organisation for Economic Co-operation and Development, also noted that childcare, after-school programs, and health care reform would provide single mothers the needed flexibility to work more secure and economically beneficial jobs.

If poverty were simply an effect of unmarried parenthood, it would seem logical that both single mothers and fathers would face similar experiences. But the Shriver Report also found that single mothers spend more on housing than single fathers, and most likely work minimum-wage jobs. Poverty, and income inequality, are the results of structural economic problems, which disproportionally affect women -- not the other way around.

Media figures who insist that single mothers are to blame for their own poverty ignore these economic realities, and distract from the conversation we should be having: that all families, regardless of structure, need access to basic social goods like equal pay, family planning, and childcare; benefits which economists have shown would improve the economy and reduce poverty for everyone.