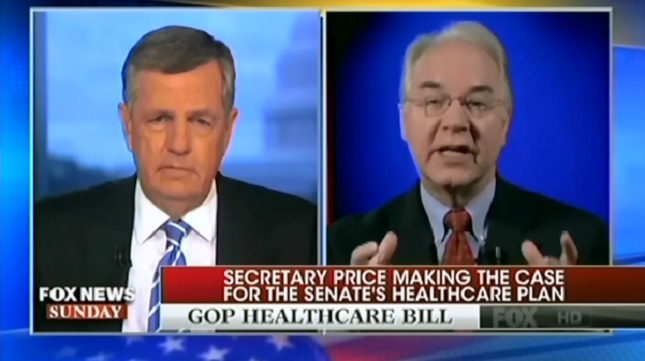 During discussions of the health care bill released by Senate Republicans this week, several of the Sunday morning political talk shows failed to cover some of the detrimental consequences the bill could impose on millions of Americans, including premium increases for the elderly, cuts to essential health benefits, and the defunding of Planned Parenthood.

After drafting the bill with an “almost-unprecedented opacity,” Senate Republicans finally publicly introduced their health care proposal on June 22. The Senate draft comes over a month after the House of Representatives passed the American Health Care Act (AHCA) on May 4. While the June 25 editions of the Sunday shows devoted a significant amount of time to covering the bill, and all mentioned the severe cuts to Medicaid and the spike in premiums that would be a result of the legislation, several left out a few key provisions of the bill that are incredibly consequential to vulnerable Americans:

Disproportionate impact on the elderly

As HuffPost noted, the Senate bill “is worse for seniors than what the House passed,” pointing out that cuts to Medicaid, the “age tax” that allows for insurance companies to charge older people more, and smaller subsidies “puts vulnerable seniors smack in its crosshairs.”

The disproportionate impact the Senate bill would have on the elderly went unmentioned on Fox Broadcasting Co.’s Fox News Sunday, CNN’s State of the Union, and CBS’ Face the Nation. But this fact was mentioned on other programs. Sen. Bernie Sanders (I-VT) pointed out on NBC’s Meet the Press that the Senate bill will “raise premiums for older workers.” Additionally, on ABC’s This Week, panelist Neera Tanden noted that under the law, “a 60-year-old person in Maine will have $9,200 increase in their premiums.”

The Atlantic explained that the Senate bill “created a backdoor way” to allow insurers “to discriminate against a pre-existing condition” by allowing states to “easily waive the requirement to cover Essential Health Benefits,” which exists under the Affordable Care Act (ACA). By waiving these essential health benefits, many people with pre-existing conditions might not be able to afford the health insurance necessary to be covered as premiums could skyrocket. As Vox’s Sarah Kliff also explained, although pre-existing condition coverage is still required, “Building a health insurance system without an individual mandate or any replacement policy runs a significant risk of falling into a death spiral, where only the sickest people buy coverage and premiums keep ticking upward.”

These points went unmentioned on State of the Union and This Week. Face the Nation host John Dickerson and Meet the Press host Chuck Todd both noted that under the Senate bill, Republicans could use this maneuver to cut coverage for things like mental health care, substance abuse treatment, and maternity care. Fox News Sunday host Brit Hume and Secretary of Health and Human Services Tom Price mentioned pre-existing conditions only to incorrectly state that patients with pre-existing conditions would not be affected by the bill.

The Senate bill also includes a one-year freeze on federal funding for Planned Parenthood. Several states have defunded Planned Parenthood, which has led to an “exploding HIV outbreak” and problems for low-income women who were suddenly unable to find a health care provider.

Cuts to Planned Parenthood went unmentioned on Fox News Sunday and State of the Union. It was, however, mentioned in passing but with no real substantive conversation around the impacts by guests on Face the Nation and Meet the Press, while Sen. Susan Collins (R-ME) told This Week that cuts to Planned Parenthood may be one of the factors preventing her from voting for the bill.

Media Matters used SnapStream to search for the following on the June 25 editions of Fox Broadcasting Co.’s Fox News Sunday, CNN’s State of the Union, ABC’s This Week, NBC’s Meet the Press, and CBS’ Face the Nation: