Sen. Sheldon Whitehouse (D-RI) is calling on the Sunday morning news shows to significantly improve their coverage of climate change. On February 1, he announced the launch of a monthly scorecard to monitor the shows' climate coverage, with the goal of prodding them to do better.

The inaugural scorecard his office put out, based on data from Media Matters, illustrates the problem: None of the five major Sunday shows aired substantive segments on climate change in January of this year. In total, there were just four passing mentions of the topic on ABC’s This Week with George Stephanopoulos, CBS’ Face the Nation, CNN’s State of the Union, Fox News Sunday, and NBC’s Meet the Press. 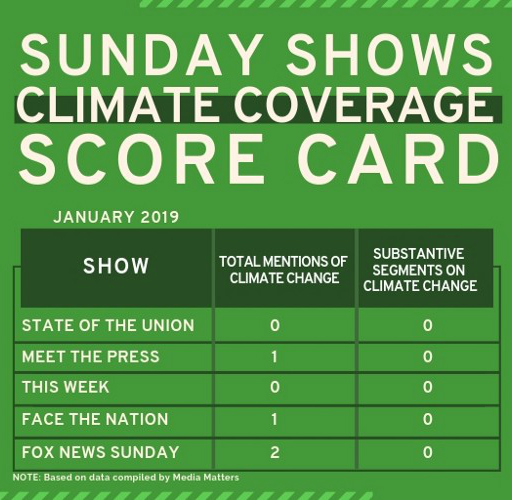 Whitehouse's office issued a press release highlighting findings from a recent Media Matters analysis of major Sunday shows' climate coverage in 2018, which found that less than 6 percent of their episodes last year featured significant discussion of climate change. The analysis also found a decline from 2017 to 2018 in the number of segments on the Sunday shows that discussed climate change.

The press release included a quote from Whitehouse:

Our broadcasters hold a special responsibility to inform the public on the most pressing challenges facing the American people. With each passing day, the climate crisis grows more dire and our government’s response to that crisis more urgent. That is why this report is so troubling. It shows some of our most important voices in the national media falling silent on climate change at precisely the wrong moment.

The press release called attention to one bright spot last year: an entire episode of Meet the Press in December that was dedicated to discussion of climate change and pointedly excluded climate deniers. But the release noted that “climate change coverage made up a tiny fraction of Sunday shows’ programming in 2018”; very few episodes featured any significant discussion of the issue.

Whitehouse, a leading advocate for climate action and a senior member of the Environment and Public Works Committee, has a long record of calling on media to improve reporting on climate change.